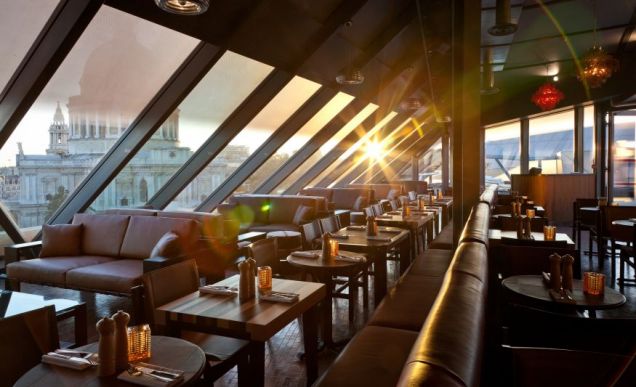 Madisons London is situated on top of One New Change, the newest shopping venue in London, opposite St. Paul’s Cathedral, with views to make most building jealous.  By 6pm it was wriggling with life, and atmosphere despite the typical English grey clouds looming above.

Seated under a glass canopy so the views are far from hidden an extensive cocktail list was placed in front of me, and it was all too hard to choose.  Being won over by The Melted Strawberry consisting of Grey Goose vodka, strawberry and apple juice I began to muse over the delights on the food menu, deciding that three courses were more than needed as there was too many tasty dishes to pick from.

Having the delicious Jamon Pata Negra for starter certainly pleased my palette, making it excited for what was to follow, with flavours my taste buds had never experienced before.  The bread was toasted to perfection and the jamon melted within my mouth.  My partner in crime had Croquetas Pata Negra, which, so I’m told, was as equally as tasty.

After a jamon filled set of starters, it was time to set my appetite to rest with a divine Spaghetti Vongole, which was displayed so nicely it was a shame to have to stick my fork in!  The Madison Burger consumed by the fore mentioned partner in crime was juicy, and cooked just as he likes it.  Certainly nothing to complain about here!

And wow, the deserts were something to write home about, not that the previous courses weren’t. Obviously!  Having an ice cream sundae to knock the socks off most that I have eaten before, and trying the Petit Pot Au Chocolat finished the meal with the same great flavours as it began with.

The views, the drinks and the food certainly make this venue worth a visit!

Disclaimer:  This was offered to me by their lovely PR team.

10 Weird and Wonderful Foods from around…