So just before Christmas myself, the partner in crime and two friends headed to La Bodega Negra in Soho.  There had been a lot of hype surrounding this venue so I thought why not see if it’s up to expectations.

Hidden behind a seedy looking sex shop, we vanished behind the big black door to a group of sniggering tourists who obviously weren’t up to date with our crazy restaurant industry.  We were greatly by a overly camp man in a cape and crazy little hat, who kindly offered to spank me! I declined the offer, and took in the surroundings, a mannequin in a full gimp suit and lots of boobs! My mind was over whelmed with naughty thoughts! 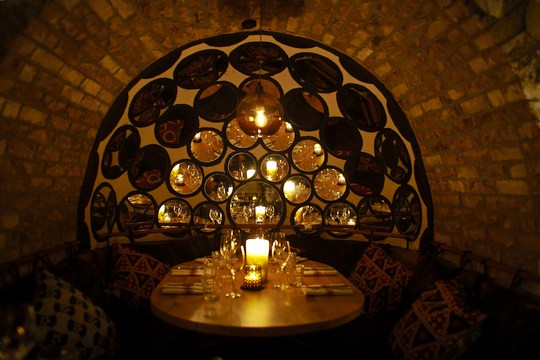 Downstairs was a lot more mundane, exposed plaster and brick with basic laid tables. Our waitress took us over to a table and for my liking we were sat a little too close to other tables, basically having to rub my derrière along their table to make the gap! But the menu made up for this!

We dined like royalty, feasting on seared steak tacos, tuna tostaditas, and a quesadilla rustica for starters. This was a great way to start the meal, a few little taster to get my stomach wanting more, and it was certainly ready for it’s pollo al sarten that I was sharing with my partner in crime.  Our other dinners chose the pork belly and a wood roasted vegetable enchilada, which they were both satisfied with.

For desert all four of us went for chocolate tarte, and I for one certainly did not want it to end!!  We weren’t quite brave enough to try the cocktails, but rumour has it that they’re pretty good!

Overall, food was great, service could be improved as one of our starters was not ordered, and it could be a little lighter  inside so I could actually see my food!