The Grade II listed building was built in 1898 as a gin palace, and thanks to the efforts of the Maroush Group it’s just as stunning today as it was in its heyday. Boasting a myriad of different marbles, towering Romanesque columns, cut glass chandeliers and carved mahogany furnishings, the interior is utterly theatrical. Crocker’s Folly gives Londoners the chance to reacquaint themselves with one of the city’s most resplendently restored architectural gems while enjoying fare from an exceptionally talented kitchen team. Blending Britain’s intrinsic love for premium quality meat with five star recipes and techniques, Crocker’s Folly has created a fine dining experience that successfully retains a sense of tavern style charm. 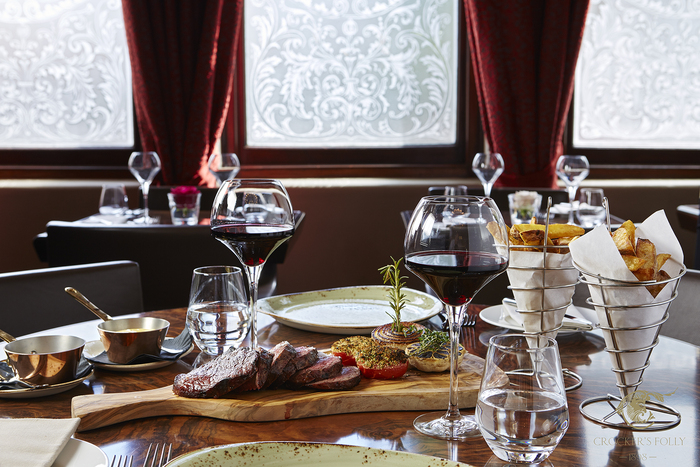 Marouf Abouzaki, Company Chairman of the establishment, says “Brits are still infatuated with the idea of the traditional pub, however they also want an experience that’s on par with contemporary dining expectations. Crocker’s Folly blends the two concepts to create a unique establishment that’s luxurious and high end, yet still nods to the cultural appeal of the traditional pub.”

While some restaurants import aged meat Crocker’s Folly has taken a back to basics approach. Inspired by its location in one of London’s most historic edifices, the restaurant has introduced a range of house aged meats prepared on-premises. All cuts are matured in the purpose built ageing unit under a specially designed chamber featuring controlled humidity and temperature.

Chef Damian Wawrzyniak helped develop the menu and was determined to source cuts from the best local suppliers. Breeds include Angus, British Isles and Hertford, three of the UK’s most sought after classes. Diners can choose from a range of cuts cooked to perfection by the Crocker’s Folly kitchen. Beef Tenderloin, Chateaubriand, aged Sirloin, Rib Eye and Rack of Lamb are all in-house favourites. As well as the main bill of fare diners also enjoy a dynamic Meat Board that changes on a daily basis. This showcases cuts such as T-bone, Porterhouse and other specialty cuts.

Thanks to the availability of an in-house meat ager cuts can be matured depending on different requirements. All sirloins and rib eyes aged to a minimum of 32 days, carried out over three different stages. After each stage is completed chefs check the quality of the meat to determine whether or not it needs to undergo further ageing or make an appearance on the Crocker’s Folly menu. As well as its ever changing range of house aged meat Crocker’s Folly also serves up gourmet burgers using a secret recipe.