Enjoy your lunch even more with this Parma Ham French Toast! 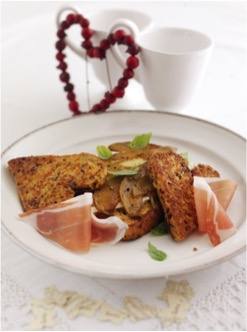 Combine the egg, milk and wholegrain mustard and season with a little salt and pepper

Melt a knob of butter in a large frying pan. Dip the bread hearts into the egg mixture (on both sides) then fry for 2-3 minutes a side until crisp and golden

In a separate pan, melt a knob of butter and add the pear slices. Drizzle over a little balsamic vinegar and cook for 1-2 minutes a side until they just start to caramelise

Sandwich slices of pear, creamy brie and Parma Ham in between two French toasts and then serve

Dare to Pair with Campo Viejo

An Evening with Cinciano Vineyard at Enoteca…