The Royal Hotel in Southend is one of the oldest buildings in the area, built in 1791 and was a former haunt of Royalty and Aristocracy, you’d be surprised to know that this was once a rather dingy nightclub that I visited once and never planned on returning to. That was until Penny told me the Royal Hotel was now in capable new hands and they really were doing the building justice. I was then ready to make my return as I fully trust Penny’s opinion on food and decor! 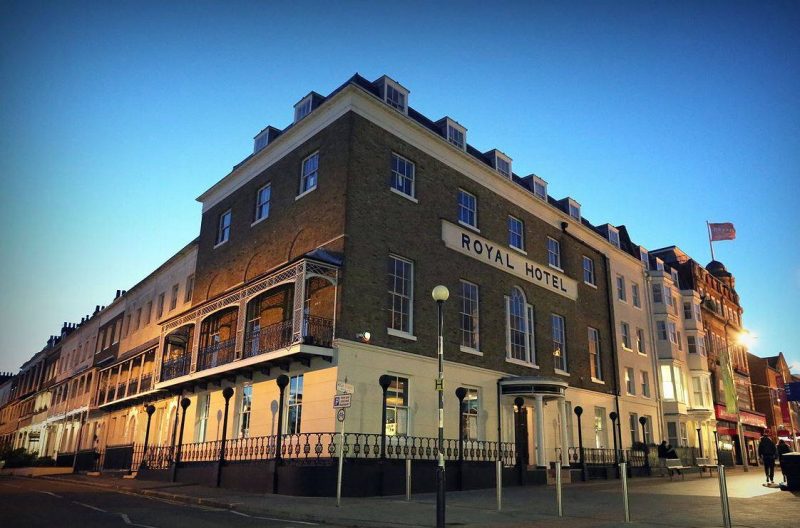 Our afternoon tea’s were served upstairs in the lavish Restaurant area decorating in golds and creams, you really do feel like a royal here! 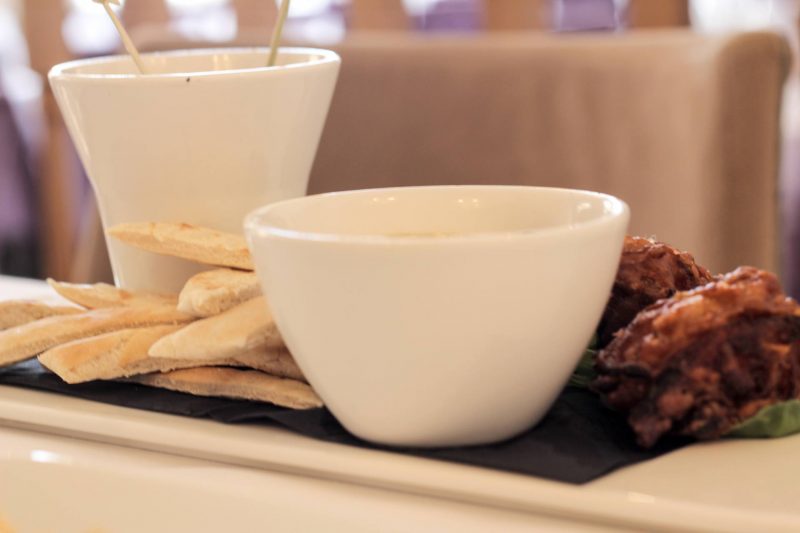 For me, the onion bhajiss stole the scene. I find a lot of them can be really greasy and leave you feeling a little unfulfilled and this wasn’t the case with these delights! 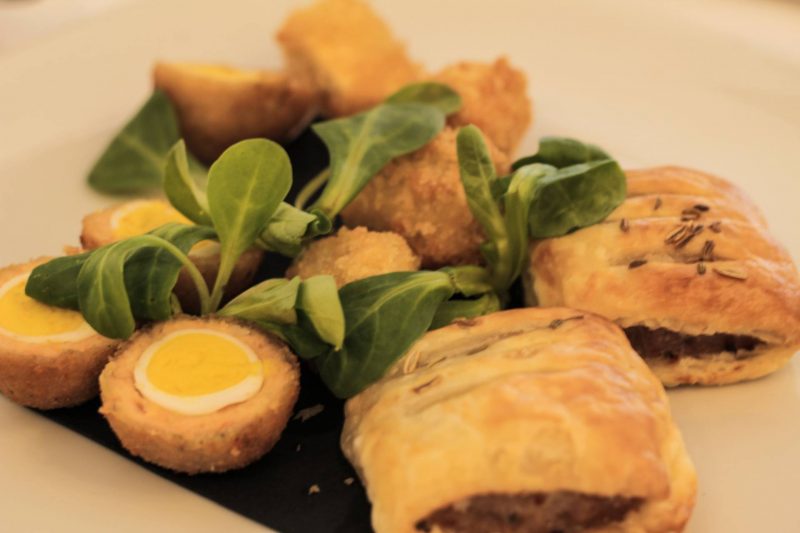 These were all really great flavours, and for me, the Salmon Scotch Egg was such a lovely idea.

Sticking with the original Afternoon Tea the sandwiches were really good, and fairly traditional too. There, of course, was a Cucumber & Cream Cheese Sandwich! There was also Honey Glazed Ham with Mustard, Mature Cheddar Cheese with Pickle and Egg Mayo and Cress. 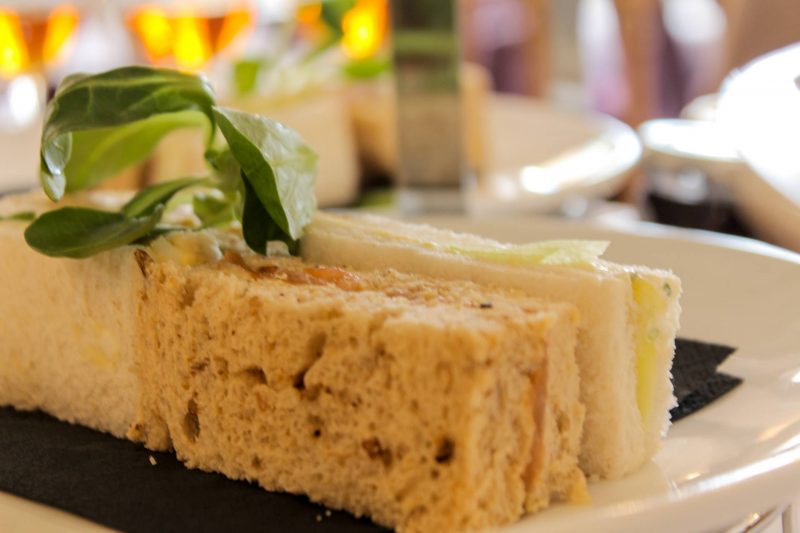 I love cucumber sandwiches as they’re so refreshing and quirky. I’m always a little sceptical if I go for afternoon tea and tat isn’t included in the sandwich selection!

With the Men’s Afternoon Tea, there’s a little less sandwich and a lot more meat! Sandwiches include Roast Beef and Horseradish and Mature Cheddar Cheese with Pickle. Things then get a little more fun…

There are Mini Burgers, Ham Hock & Welsh Rarebit Croque Monsieur and Bangers & Mash!!  The meet used in the homemade burger patties was fantastic; hardly any grease, full of flavour and definitely made me want to return for a full sized burger! I also loved the serving idea for the bangers & mash; the sausage was split open with the mash in the middle, a little bit like a crazy hot dog! Cute! 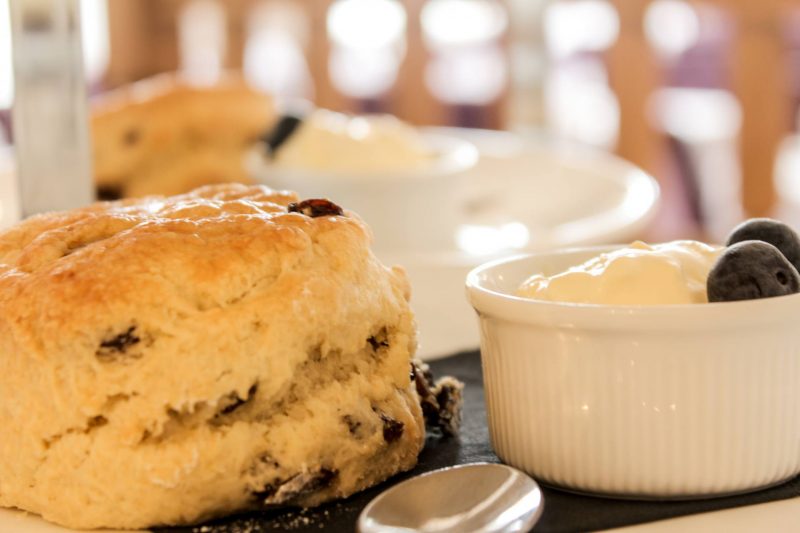 No afternoon tea is complete without scones so although I was gradually filling up, I did try half of the currant scone as they looked so tasty. Topped with cream and jam from Tiptree (keeping up the Essex love!), I was very happy with my decision to try one!

We had such an insane dessert selection from the two Afternoon Tea’s that I had to chose wisely! The first I tried was from the Gentleman’s and was the Cider Jelly; being a cider addict I couldn’t say no and it was so flavoursome. Anyone know how to make this at home as I NEED to! From the Original I had the Sweet Treat Shot Glass on Penny’s recommendation; 10/10 from me too! I then hopped back over to the Gentleman’s Afternoon Tea to finish up on the Millionaire’s Shortbread, a personal favourite of mine.

Despite all of this being blood amazing, I think I may have save the best bit til last!

My flight of Rum to accompany the Gentleman’s Afternoon Tea! Penny had the Whisky flight as that’s also an option. 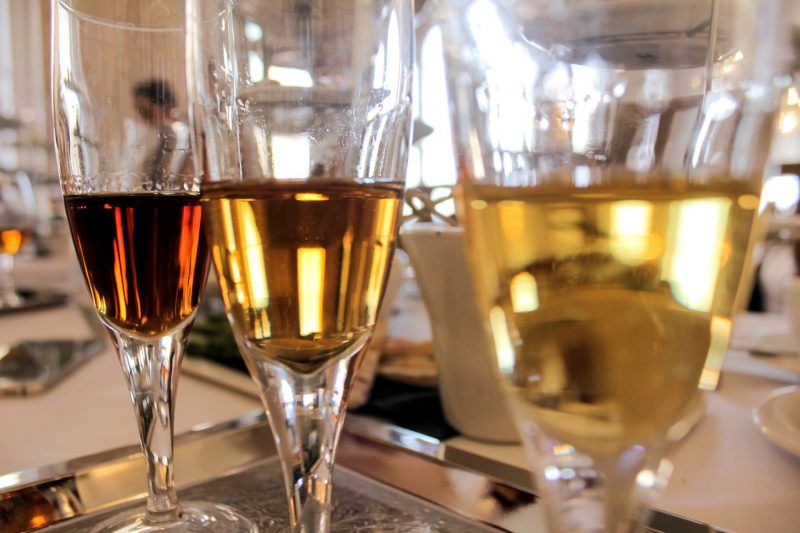 The Kraken Rum is a dark rum with spices, a little caramel, and is really smooth. I love Kraken in a cocktail to give it a little edge but had never tried on it’s own and it was bloody good! The Caramelo Rum was my most favourite and I’m actually toying with the idea of buying my own bottle for at home! With a hint of coconut, toffee and caramel this was a complete sweet treat that went down really easy. The Old J Tiki Fire does what it says on the tin, it’s like fire; it cleared my throat and nose but wasn’t a nasty feeling. It was a good quality strength and the a twist of Persian lime and delicious vanilla adds to it.

I had a lovely afternoon trying all of these amazing foods! I’d highly recommend if you’re looking for something different.

One response to “Afternoon Tea at The Royal Hotel, Southend *”