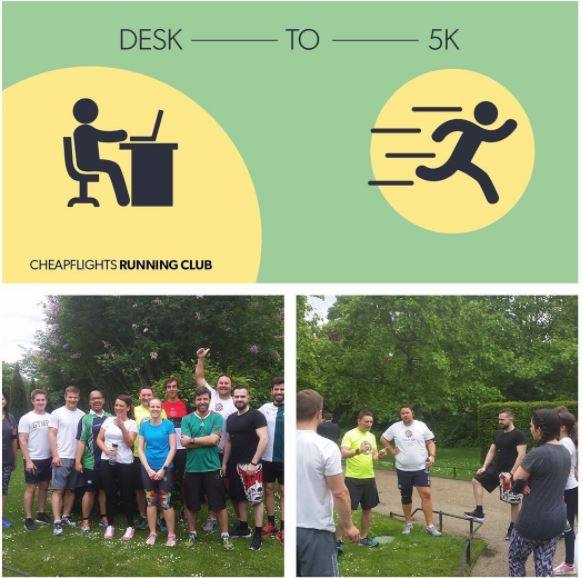 Today we have a guest post from my run coach, Darren, who set up our office’s Desk to 5k and it was really successful!

When the weather started to get nicer this year I set up a section of the Cheapflights run club purely for beginners; Desk to 5k (a take on the NHS couch to 5k). 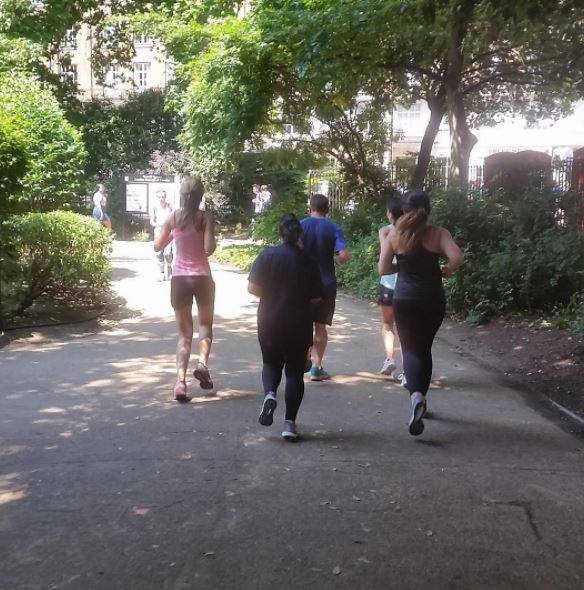 A common response to colleagues joining the run club was “there were too many fast people and I’d get left behind” or “I don’t want to look silly in front of all the runners”.  So, to get more people coming and erase that fear of joining a run club, I set up a week taster session.  I made the sessions really easy, so the total running time was only about five minutes, and that was split into one-minute reps (one-minute running, one-minute walking).  I emphasised that the sessions are not races, every single person has a different pace and if youfeel it wasn’t for you then at least you have given it a try.

On the first day, I was pleasantly surprised with the response, there were a load of new faces.  Now I know these people personally but I don’t know what kind of runners they are.  So, my priority was to get to know each of the newbies running level.  A few questions on their running ability, ie have you run before, how often do you run and how far do you normally go?  Obviously, five different people gave five different responses.

With the challenge of getting people to enjoy the running club but get something out of it too was also tough.  In my opinion, the NHS couch to 5k is quite a quick jump, by week 6-7 you are already running 25-30 minutes non-stop.  While some people can do that, there are just as many that can’t.  As the leader of the group I didn’t want to frighten people by making unrealistic, or certainly difficult targets.  Instead I put the target on to the runner – what would you like to get in 4 months time?  The suggestion of a bit of fitness along with being able to run 20 plus minutes non-stop was probably the most common.

So, using the NHS couch to 5k plan, I tailored it to ‘my’ group of runners.  And rather than by week six having people running 25 minutes non-stop, I have planned that to be months ahead rather than weeks.

Another question I needed to answer was when is the best time to do this?  Mornings before work?  No because people have different start times and schedules.  After work?  Again, different finish times and in my experience, evening runs are not as enjoyable, especially if its been a long day at work.  So that left only one option, lunchtimes.  The downside being, people are here to work and with a lunch being one hour, we needed to get a warm up, session, cool down, shower and lunch, all in 60 minutes.  Tailoring sessions I also needed to bear this in mind, anything more than 30 minutes (including walking breaks) would impact people’s lunch.  I always recommend getting permission from your line manager before undertaking these sessions, just in case anything does not go to plan.

With all what I have said, you might think this was a crazy idea and why would anyone volunteer to take this on.  But the best part of all this was the feedback I have been getting, to have someone say how much they are enjoying it and how much they have improved makes it all worthwhile.

Important; I am a qualified LiRF (Leader in Running Fitness) and have been trained by England Athletics.  There are important things a leader needs to do and ask before any sessions has started, for example a reccy of any route you are planning to run or checking everyone is fit with no underlying medical conditions.  Please see http://www.englandathletics.org/ for more details.

Beauty Tips for Your Wedding *

My Top Tips for New Drivers *