Spending Time with Mom & Dad at the Preview Screening *

I’ve never done a film review on here before but I guess there’s always time to start them. Mike is a big film buff and I’m slowly getting better, but I do tend to just ask to watch ‘a funny one’ when Mike asks what I want to watch. I don’t mind if it’s chick flick funny, darkly funny, boyish humour funny or horror funny; I just like a good laugh when I’m chilling out with a film. I’m a little more open when it comes to going to the cinema as I love action and adventure on the big screen as I feel it belongs there. So when I was invited along to a private screening on the new Nicolas Cage and Selma Blair’s film, Mom & Dad I jumped on it. 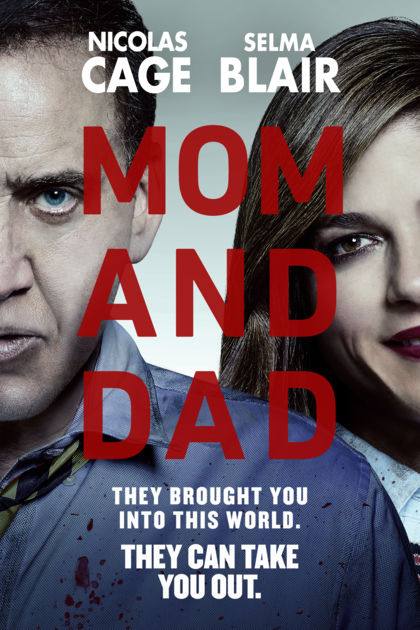 Fast forward to the start of March when we brave the snow and head on over to the NBC Universal offices not far from Tottenham Court Road station. We were greeted with drinks, snacks and of course some props to snap away with. We weren’t speedy enough to the props but had a good laugh watching the others killing their friends off with blow up knives for Instagram.

At 7pm, we were led into a small cinema within the offices to be amongst some of the first in the UK to watch Mom & Dad which was pretty darn exciting!

In short, Mom & Dad is all about a slightly rebellious teenage girl, Caryl, and her little brother, Jack, who try to survive a wild 24 hours during which a mass hysteria of unknown origins causes parents to turn violently on their own children. The film follows the children trying to escape from their parents with the help of Carly’s boyfriend who swoops in to save the day time and time again. There’s a visit from the grandparents, incredible breakdowns from Nicolas Cage and plenty of blood and guts.

It’s filled with suspense, laughs and plenty ‘oh no way’ moments that had me hiding behind my hands and on the edge of my seat. There were twists, twists and more twists that had both of us super shocked with the ending. We both had our own ideas of how the ending would play out but we were both wrong and we love it when that happens as there’s nothing worse than guessing the end of the film ten minutes in.

I’d highly recommend going to see Mom & Dad when it comes out on 9th March as it certainly impressed us and Mike’s pretty darn hard to impress when it comes to films! It gives you plenty of laughs, gasps and edge of the seat moments so go check it out.

Wine’d Up with Mr Vine