Hanging Out with James Martin and Cooking his Recipes *

Sometimes an email drops into my inbox and I think, ‘Hold up, is this actually for me?!’ and then I reply yes as fast as I can so they don’t have a chance to email and say ‘Sorry, not for you!’. This event was one of those emails! I was invited along to meet James Martin at Fenwick in Colchester, watch him cook some incredible recipes and receive a copy of his new book all whilst being looked after like royalty!

I rocked up with Mumma Bear in tow, she’s a bit of a cookery fan and she does a lot of bits and bobs behind the scenes at Squibb Vicious so I thought I’d take her along with me as a bit of a thank you! She was also going to be my taste tester for when I recreated a few of the demo recipes so she would be able to compare the two having witnessed both! 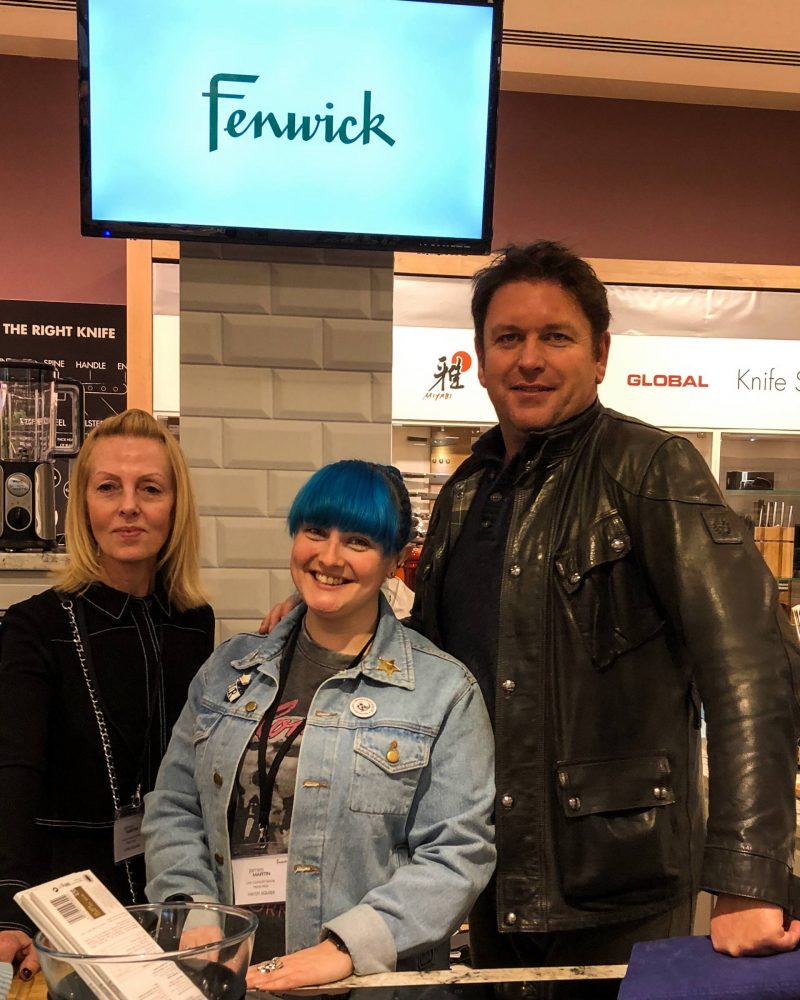 Meeting James was a bit surreal, he’s so tall in person! I had to ask him to not make me look so short! He was also really pleasant, which can be rare when you meet TV personalities! I’ve certainly met a few in my time that didn’t live up to expectations!

After meeting him, we were whisked off to have some lunch in Carluccio’s, who James’ new book is actually dedicated to. I had the lovely Chicken Milanese which is the crispy flattened chicken breast in rosemary and Grana Padano breadcrumbs served with baby gem, mixed leaves and baby plum tomatoes in a mustard dressing as I knew I had pasta for dinner that night. It’s rare that I don’t order the Spinach & Ricotta Ravioli so it was great to try something else on the menu! 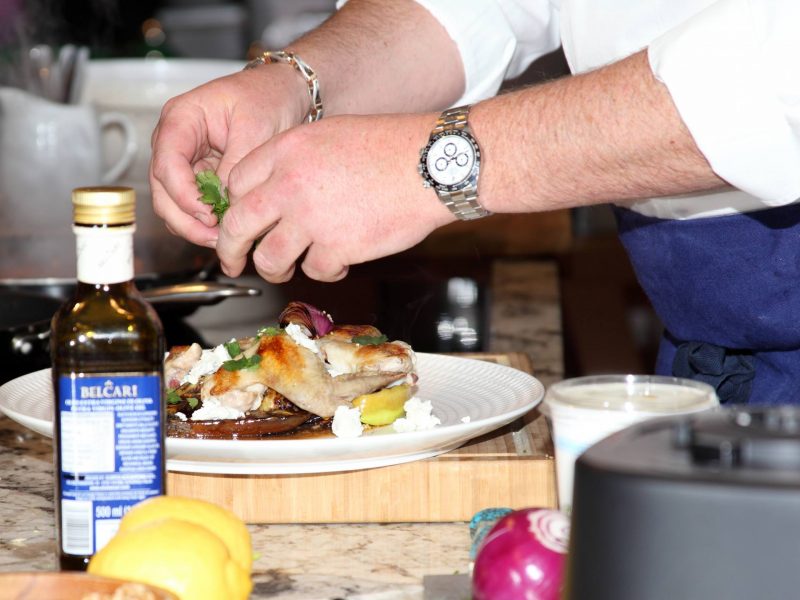 Once we had devoured out lunch, it was time to watch James make 5 recipes in the space of 45 minutes! I mean, I can rarely get dinner prepped and done in that time and we tend to eat a lot of the same meals week in, week out. But, obviously, with James being a pro, and my skills leaving a lot to be desired, he managed it and it all looked incredible! Seems I’ve got a hell of a lot of practicing to do! 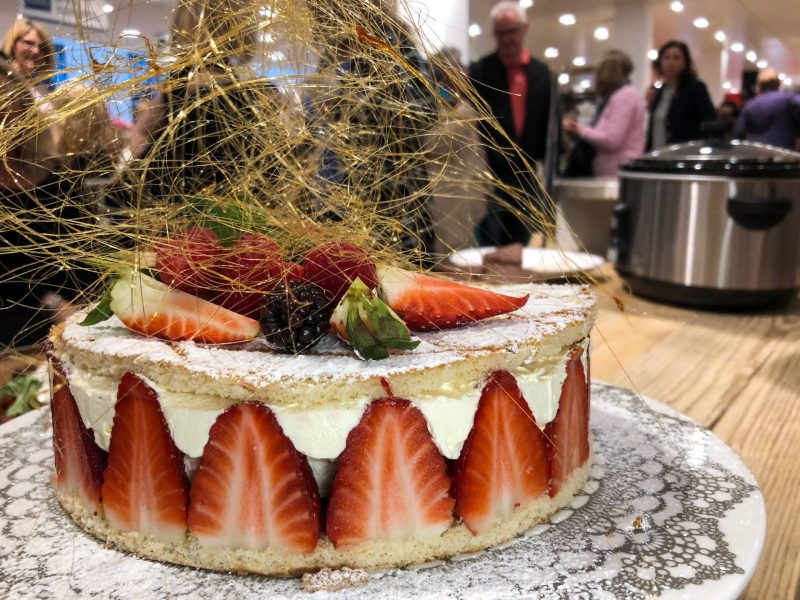 One of my favourite recipes was this super speedy Strawberry Gateau which took only 10 minutes to create! There’s a little secret to it, you use a premade flan bottom that you can buy from your local supermarket, slice it down the middle and there’s your top and bottom. Massive time saver tip there!

So the following day when I got home, I decided to try out the Indian Prawn recipe to pair up with some rice for dinner. It was dead easy, so why not give this a go:

Method
1. Mix the paste and yoghurt.
2. Fry the onions, ginger, garlic for 10 minutes add the tomatoes and puree and cook for 5 minutes.
3. Add the prawns to cook. Pop your rice in the microwave!
4. Serve the prawns up! 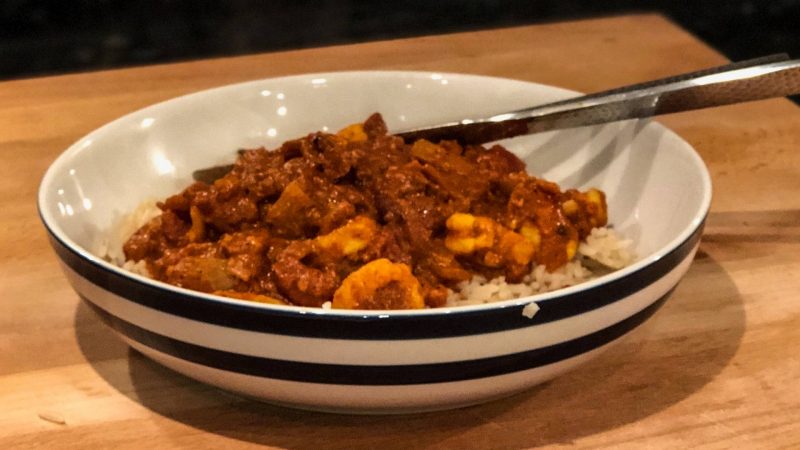 This was so tasty and I will be cooking it again for sure. It’s not quite as pretty as James Martin’s but for trying something new I was dead pleased with how it tasted. I shall be using James’ Naan Bread recipe to mop up the extra sauce next time.

As the prawn dish went down so well, I then decided to make the Baked Chocolate Mousse Cake to take over to my parents for an Easter Sunday Dessert. This one took me far longer than it did James on the day and even with Mike’s help I think we have a lot of room for improvement! 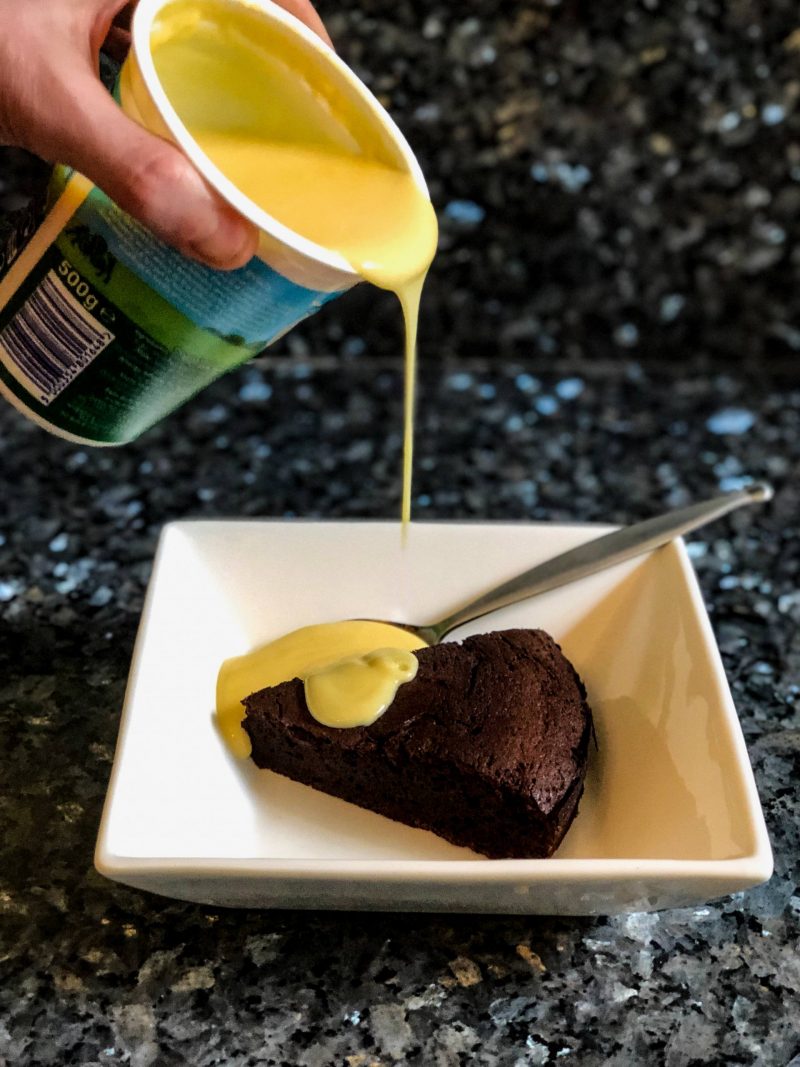 If you want to try it at home for yourself:

Method
1. Line the base and sides of a 20 cm spring-bottomed cake tin with greaseproof paper and set the oven to 180°C. Melt the chocolate and butter over a pan of simmering water.
2. Whisk the yolks with 2 tablespoons of the sugar for half a minute. Stir in the melted chocolate and mix well. Beat the egg whites with the remaining sugar until very stiff. Quickly fold into the chocolate and pour the mix into the cake tin. I added in a little Vanilla flavouring at this point too.
3. Place on the middle shelf of the oven and bake for 20 minutes.
Remove from the oven and serve immediately.

I, not only, had a great day with James Martin at Fenwick’s but also loved making the recipes at home, so expect me to be showing off a few more from the American Adventure book shortly!

Afternoon Tea at The Langham, London.

Share:
PREVIOUS POST
"How You Can Help Deal With Common Allergies Throughout The Day *"
NEXT POST
"Learning How To Build your Brand at the #BloggerBrandWorkshop with Currys PC World"
1 comments so far.