What Happens When a Private Chef Takes Over your Home Kitchen? *

Have you ever wanted restaurant quality food in your home? I know it’s something I strive for when cooking dinner most nights but I lack the skills, I lack the effort and I certainly lack the ideas, so we let the lovely team over at La Belle Assiette organise a professional chef to come and cook at our flat.

La Belle Assiette brings talented chefs into your kitchen so you can enjoy hosting dinners, without the stress of cooking or cleaning. Their community consists of 364 professional chefs and you can pick from those that service your postcode and their menus. All of the menus are grouped into three clear price levels of £39, £59, and £89 per person so pick the pricing. We personally feel that the £39 a head menu is far better valued than eating out from our experiences.

We were paired up with Gareth who called around 10 days before the dinner was due to take place, we chatted about the foods we love, the foods we dislike and cuisines that we’d like our menu to resemble. A week before the meal, Gareth called back with three options of starter and main course so I could pick my favourites. He then arrived at my flat fully prepared to cook away the night and leave us with very full tummies!

I was shocked at how well Gareth adapted to our kitchen as I’m sure it’s not even half the size of the kitchens he’s worked in previously.  He used our slightly dodgy oven with ease and within minutes of unpacking all of his ingredients, equipment and donning his chef hat, the flat began to smell incredible!

My parents arrived to join Mike and I for dinner, we opened a bottle of wine and sat at the table I had laid earlier in the day. Gareth had offered to lay the table too but I didn’t want him worrying about lots of little bits and pieces when trying to sort our dinner! 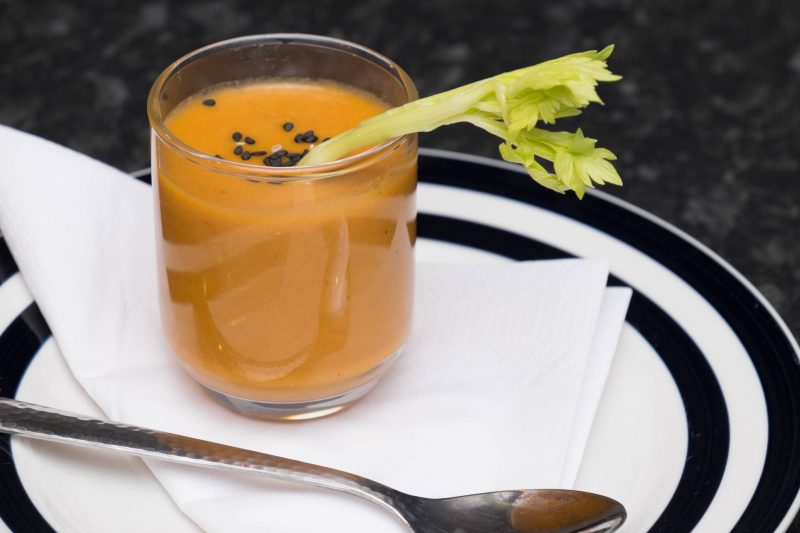 We began with an amuse bouche of Gazpacho with a hint of toffee vodka that was slightly sweet as you first placed the spoon in your mouth and then left the right amount of chili kick as the aftertaste. I never think to order Gazpacho when we go out so this made a welcome change and was a little surprise for us on the night. 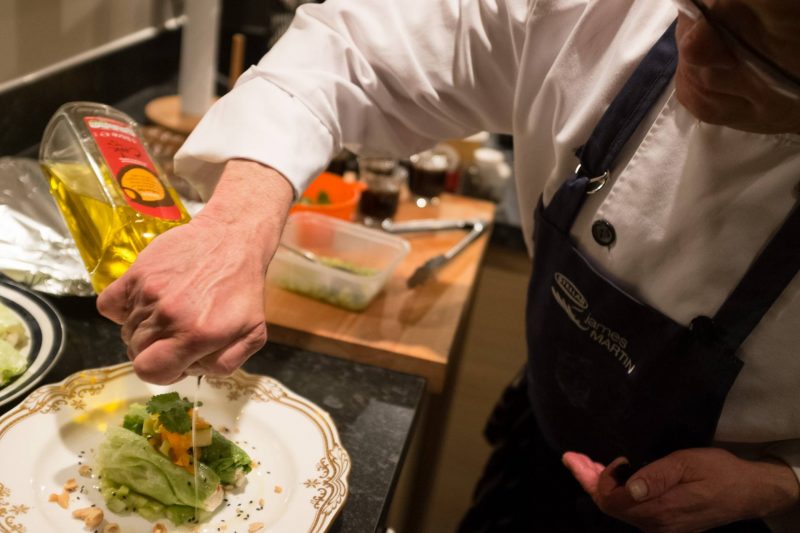 Whilst we were eating our Gazpacho, Gareth was back busy in the kitchen rustling up our starter. I was so eager to try this as I chose this option over my usual favourite of scallops as I knew it’d keep Mum happy!! 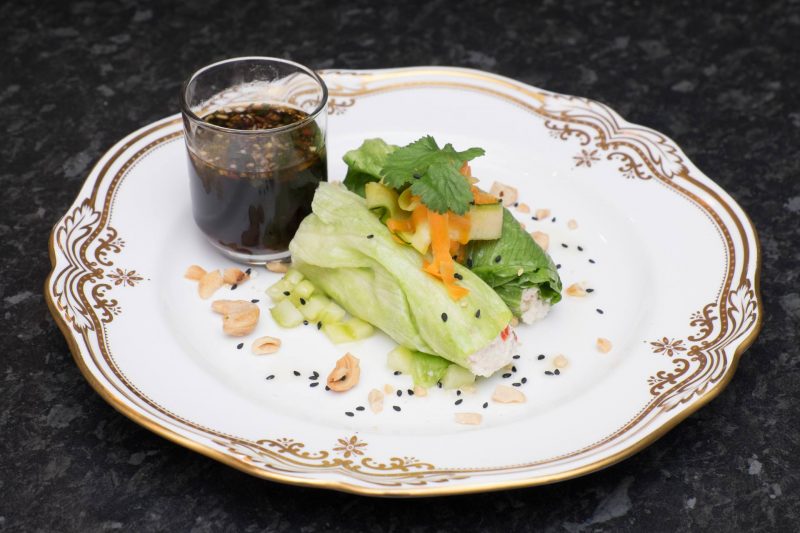 The starter was Thai style crab and lettuce ‘Spring rolls’ served with vegetable ceviche, pickled ginger, cashews and Asian dipping sauce. Well that dipping sauce was incredible, so much so I kep the leftovers and made stir fry with it the following night! The crab was there in abundance in the lettuce spring rolls and was so tasty that I’m glad I chose this as I know I can cook scallops myself at home but I’d never attempt something this amazing myself! 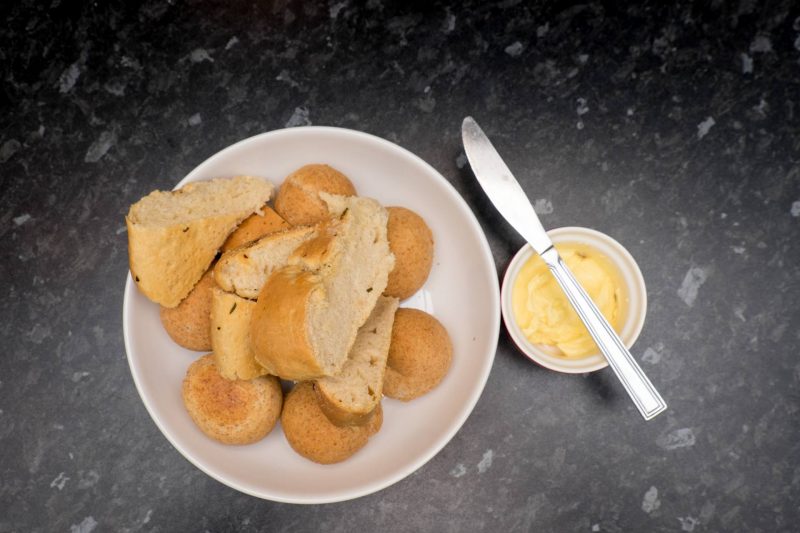 Gareth also supplying with some homemade foccachia bread and wholemeal rolls to accompany our starters. It was so mice to have warm bread on the table and it had made the flat smell so good! 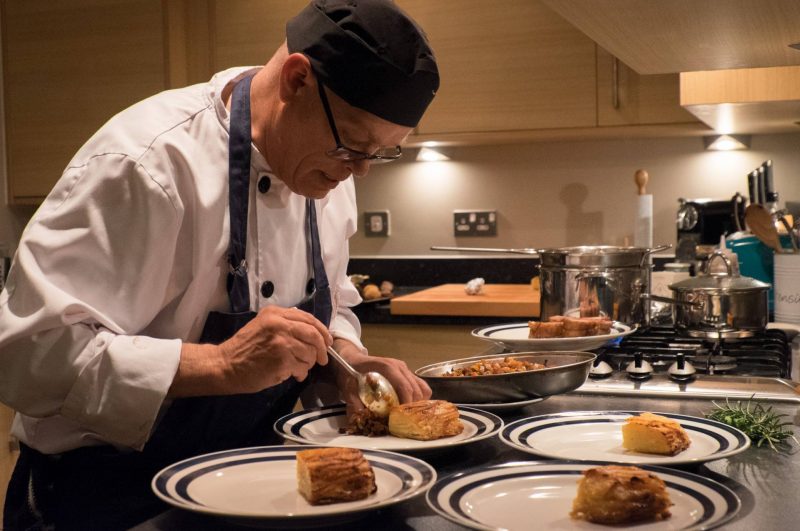 Gareth just didn’t stop working, I dread to think his step count around our little kitchen that evening! As we were dipping our amazing bread into the Asian dipping sauces, our main courses were being plated up in the kitchen. 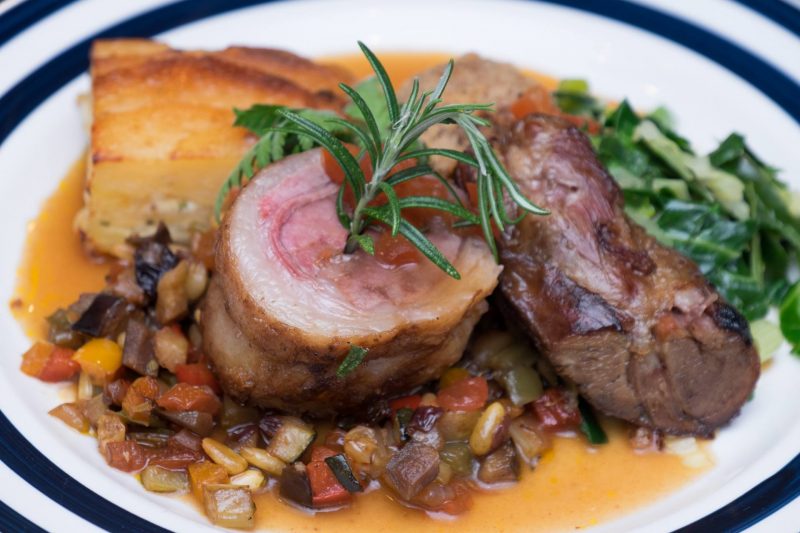 With it being the season of spring, despite what the weather tells you, we had opted for lamb as our main course. On the plate was a trio of lamb, dauphinoise potato, spring greens, caponata, all topped off with a rosemary jus. We had pieces of lamb I had never tried before like the neck and it was so tender that it literally just fell apart. The lamb bon bon was like a little shepards pie that soaked up the jus so well. And those potatoes, I’d eat them at ever meal if I could. The veg was also so good, with the pine nuts in the caponata giving it a nice little bite. 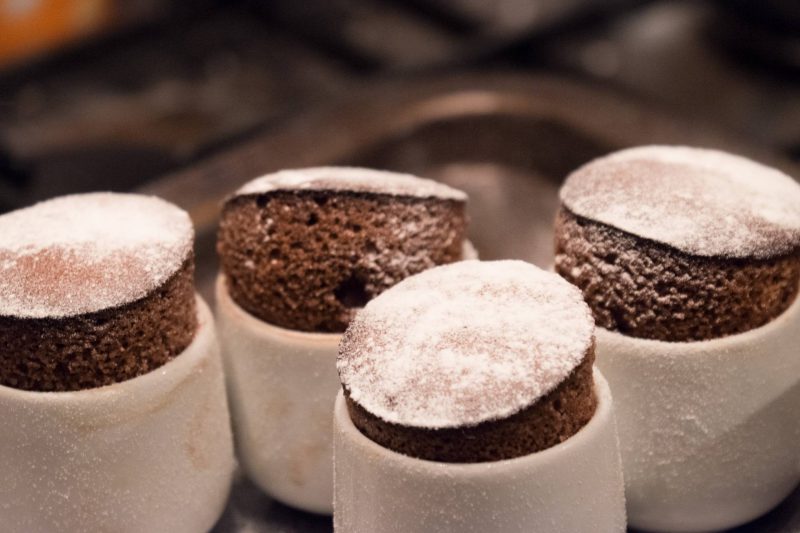 Before I talk about dessert as a whole, we need to take some time out to appreciate the fact that Gareth made four perfect little souffles in our oven that seems to have a mind of its own! Just look how cute they are! 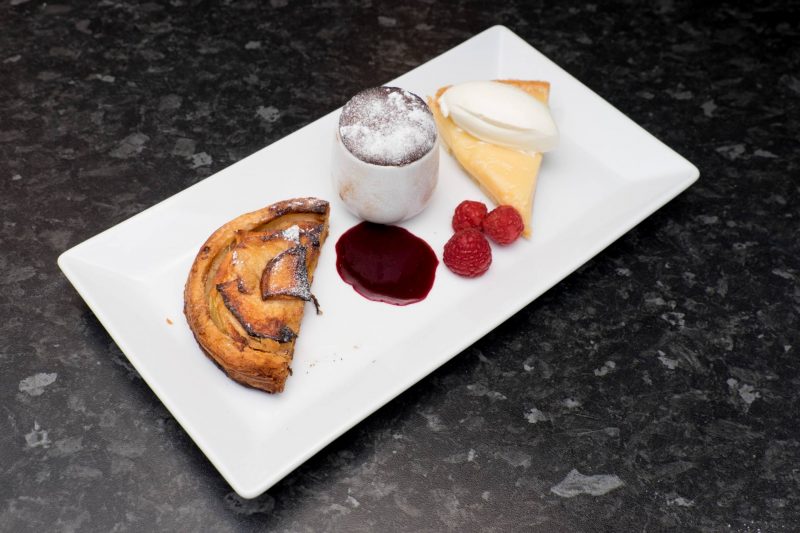 So the whole dessert was an assiette of desserts that was made up from a slice of light lemon tart, that epic chocolate souffle, and a thin baked apple flan. The apple flan was the favourite of both of my parents but I am 100% behind the souffle! 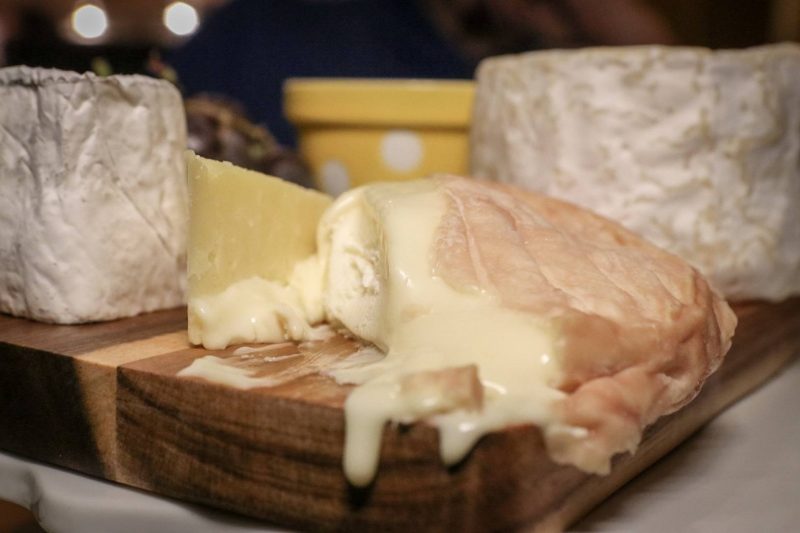 And it didn’t just stop at dessert, we had a full-blown Cheese Board too. Just look at that Époisses de Bourgogne oozing, it’s making me hungry just looking at it. We were suitably stuffed but we did manage to squeeze in a little cheese and I’m so glad I did as it was all so good!  There was more homemade bread, crackers, cheese straws, you name it we had it there to smother in cheese. It was legit a dream come true!

Our night was far more than we had thought it would be; Gareth was a sheer pleasure to work with and have in the flat as he cleaned up so well. The food was all above restaurant standard for the price of the menu and I would have Gareth cook for me again without even thinking about it. In fact, I’m quite eager to try his Strozzapreti pasta cooked in lobster stock, oysters, chicken oysters, sweetbreads, broad beans, basil, and tomato!

Channeling my Inner Dino and Tackling the…

Share:
PREVIOUS POST
"What Can Steel Framed Buildings Be Used for in Farming? *"
NEXT POST
"Ahoy There Sailors! All Aboard the Royal Yacht Britannia *"
0 comments so far.