When it comes to wine tasting, I’ve been to a fair few. I bloody love learning and drinking at the same time, I mean, who doesn’t?! So when my parents joined The Haciendas Club a few months back I was dead interested to find out more about their monthly wine tastings. We decided to head along ourselves earlier in the week to see if it really was as good as mum and dad made out!

The Hacienda Club formed back in  2012 as a members’ club “without walls” in London. They wanted to create a space that Club Members and their guests are able to socialise in true Spanish style, which means enjoying great food and a glass of wine or two. Since then the club has grown into a lot more, they not only offer small wine and meat pairing tastings once a month, they offer memberships where you can spend a few days over in their hotel near Salamanca in Spain, get great discounts on their products and socialise with like-minded people. Not only do they produce some pretty darn good wines, they now produce over 50 different types of cured meat from their own Iberian pigs, who inhabit the 500-hectare estate that you can go and visit with your membership.

The night we had chosen to head on down and get drinking, I mean learning, they were showcasing 7 Spanish wines and 7 delicious types of meat. All of the pairings on the evening have been chosen by the team at Viandas, the destination of the evening. Arriving at 6.45pm, I began thinking if all the ‘adults’ there waiting to wine taste would take us seriously. We look about 18 and with my ridiculous blue hair, not many people take me seriously anyway. I just always think that wine tasting is for proper adults and despite knowing a decent amount about wine, I’m not quite sure that I have hit adult status myself yet.

We were handed a rather refreshing glass of Marques de la Concordia Reserva de la Familia Vintage Rose Brut from 2013 and that certainly kicked the night off well. It tasted just like when you leave a strawberry in a glass of Cava and eat it once you’ve drunk the glass. It was really good and something that could end up getting me into trouble after I sunk a few glasses bottles at a summer BBQ.

Then the wine tasting actually began. It was a very relaxed affair; just topping up your glass, picking up the paired meats as you go along, and making friends. I was actually really impressed at how welcoming everyone was, other wine tasters approached us, chatted with us and they made us feel so welcome after my little freak out before joining in.

But yes, on to the pairings…

Another cracking glass of Cava so we were off to a winning start. This Cava is straw yellow in colour with a golden rim and those small bubbles we all love. On the nose, it is filled with fruits such as ripe apricots and vine peaches. It has some pretty intense, yet fresh with ageing notes and on your palate, it has dried nuts, toasted bread and citrus flavours. It’s a great on its own or with seafood and grilled fish or the pretty lush Paleta we had it paired with. The Paleta comes from the shoulder cut of the Iberian pigs reared on the open range in woodlands on a diet of acorns and the natural drying houses and cellars give the cuts refined aromas and unique sensory characteristics. So good!

This pale yellow wine has been made from Viura grapes which is fermented at 18 °C, the lower end of the white wine fermenting scale. It’s fairly citrusy on the nose, which normally puts me off, but this was a very tasty wine! It’s best served with fish and rice which does suit most white wines, it did also pair super well with the Salchichon. Again, this is acorn-fed pork that are cured for 5 months in a drying room. 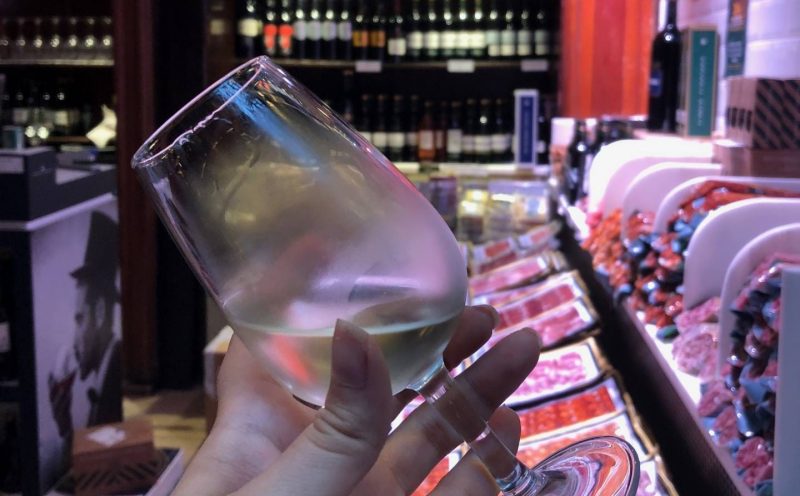 This 100% Verdejo wine comes from a 100-hectare vineyard that is around 740m above sea level meaning this is the perfect site for those grapes to thrive. They are also harvested at night! This wine was dead melony on the nose and was just so refreshing. It felt like a proper summer sun wine that was maybe a little too easy to drink but not one I’d drink all year round. This one also seemed a favourite of lots of the other guests too. This was paired with Lomito which means the ‘tenderloin’ so it was so tender, lightly seasoned with herbs and was rather low in fat for what it was!

So we are onto the red wines now, and we started with a 100% Tempranillo which is right up our street. We tend to drink Tempranillo wines when eating as they’re a little lighter. This Hacienda Abascal Crianza smelt incredible with plum and vanilla aromas. I just found myself keep sniffing it, in the least weird way possible. The pairing on this was by far my most favourite meat of the night, it was basically a mix of black pudding with chorizo which are two things I really love! It was also filled with onions giving the meat a very different texture to the rest we ate that night. I could eat A LOT of it! 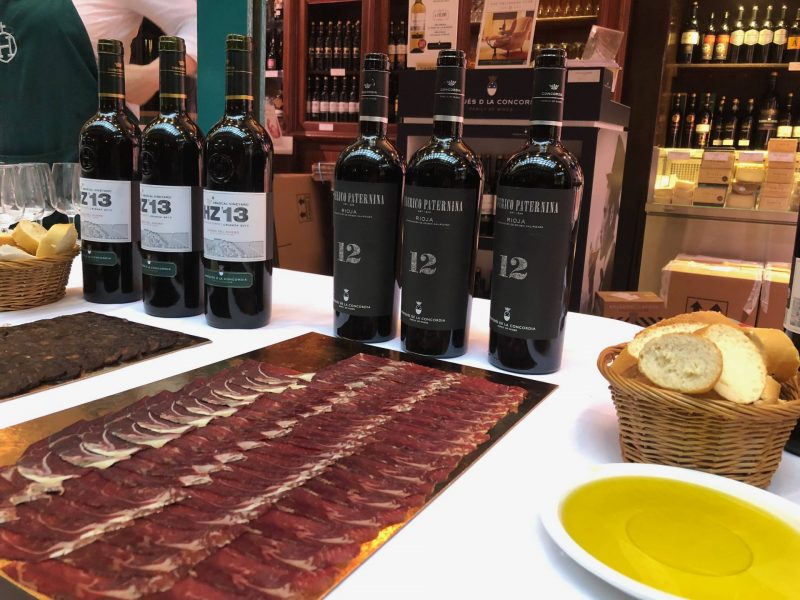 This wine is a little different from the others as it’s aged for 12 months in American oak barrels giving it a lovely cherry colour. On the nose, it was very rich with chocolate and spices which was pretty darn good. Having this wine with the Cecina Reserve was so good. They complimented each other perfectly as the meat was also rich and dark in colour too. The meat is air dried and smoked cured, and is actually beef rather than pork.

So this wine is pretty popular with the members and I can totally see why. This was a very dark red wine that was packed with intense blackberry and plum fruits, with hints of spice due to ageing in French oak. It is well balanced, well-structured and has a lingering finish that pairs perfectly with the Jamon Iberico Gran Reserva. There are very strict rules when producing this type of meat and it seems that they have totally nailed it. I don’t think I could have it in my fridge as it’s be gone within one sitting!

Our last wine was pretty darn good, but we are dead biased as we drink a lot of Rioja Gran Reservas. I totally blame our dads for that! It’s very dark in colour, with hints of ripe red fruits and vanilla on the nose. This is the perfect wine for a lazu Sunday afternoon roast dinner, or if you’re feeling something a little lighter then the Chorizo Gran Reserva will more than do the trick. Marinated with paprika, salt, garlic and oregano, what is there not to love about it?!

Mum and Dad were definitely right with how good the tasting was, so much so that we signed up to be Gold Members ourselves and can’t wait to learn and drink a little more over the next year!

Share:
PREVIOUS POST
"How to Spend a Wonderful 48hrs around King’s Cross and Euston, London *"
NEXT POST
"Eight Great Reasons to Invest in a Private Number Plate for Your Car *"
2 comments so far.