I’ve recently decided that I’m going to try and cut my meat and fish intake down by eating more vegetarian meals. I’m not going to be overly strict with it, but it’s making a huge change for someone like me who eats a hell of a lot of meat! I’ve been doing pretty well with it so far, only slipping up a few times when eating at people’s homes or when there’s been very little veggie options on menus when out that I’d actually want to eat; this usually involves a roast dinner!

It’s opened my eyes up to the world of vegetarianism and even veganism has come on so far since my last stint at a veggie over 15 years ago.  There are so many more incredible options out there now and I’m making lists of places I want to try to expand my food knowledge! The first on my list was vegan pizza joint Purezza, based in Camden that I had heard so much about!

The vibe in the restaurant was very chilled out, lots of chitter chatter and a dog bowl by the door that made me know I was about to eat at was for my kind of people! 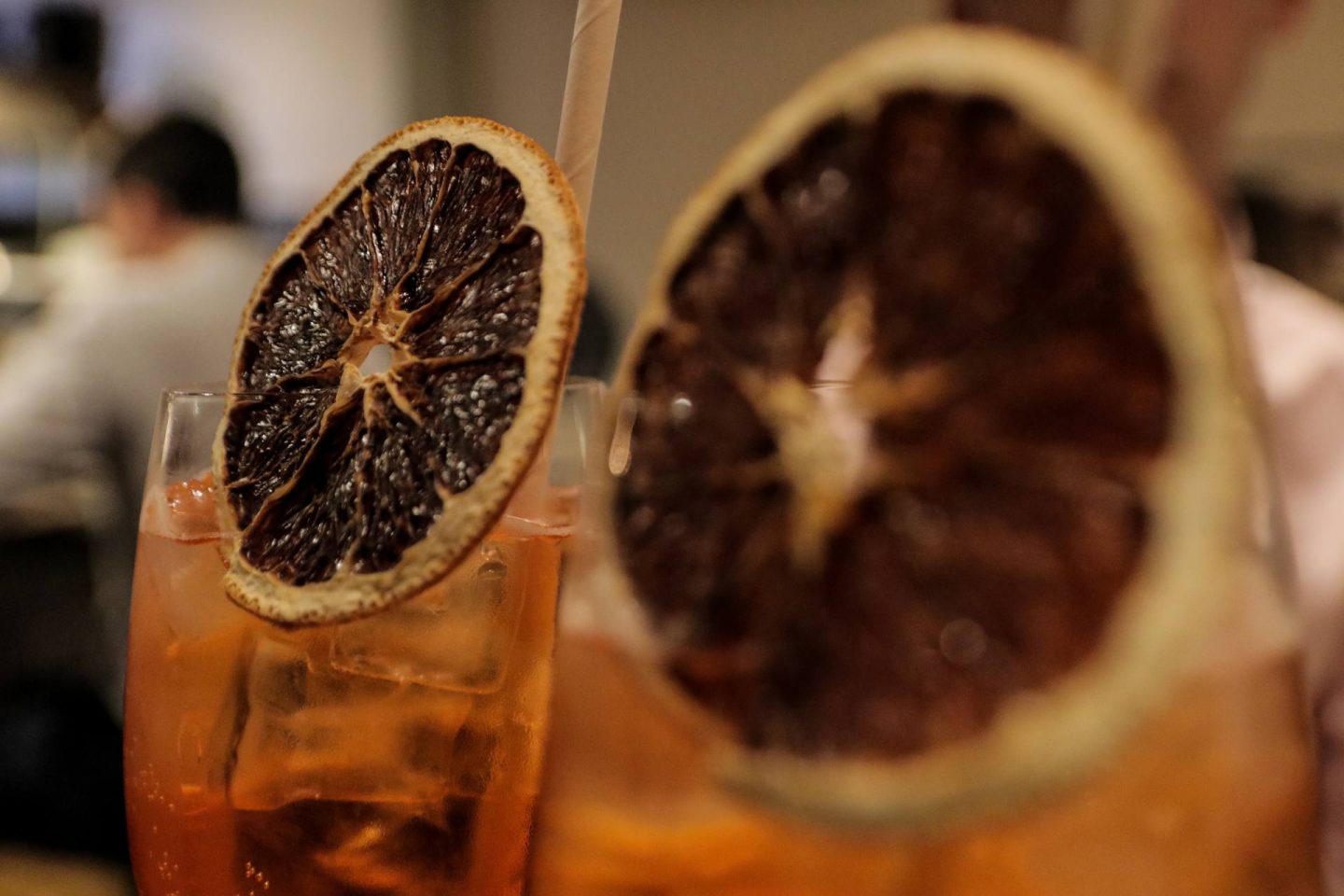 As we perused the menu we supped on the Purezza Spritz, which is their twist on the classic, with Aperol, pear cider, gin, organic prosecco and a dash of plum juice. It was fresh, fun and was rather welcomed on the warm evening we were there. 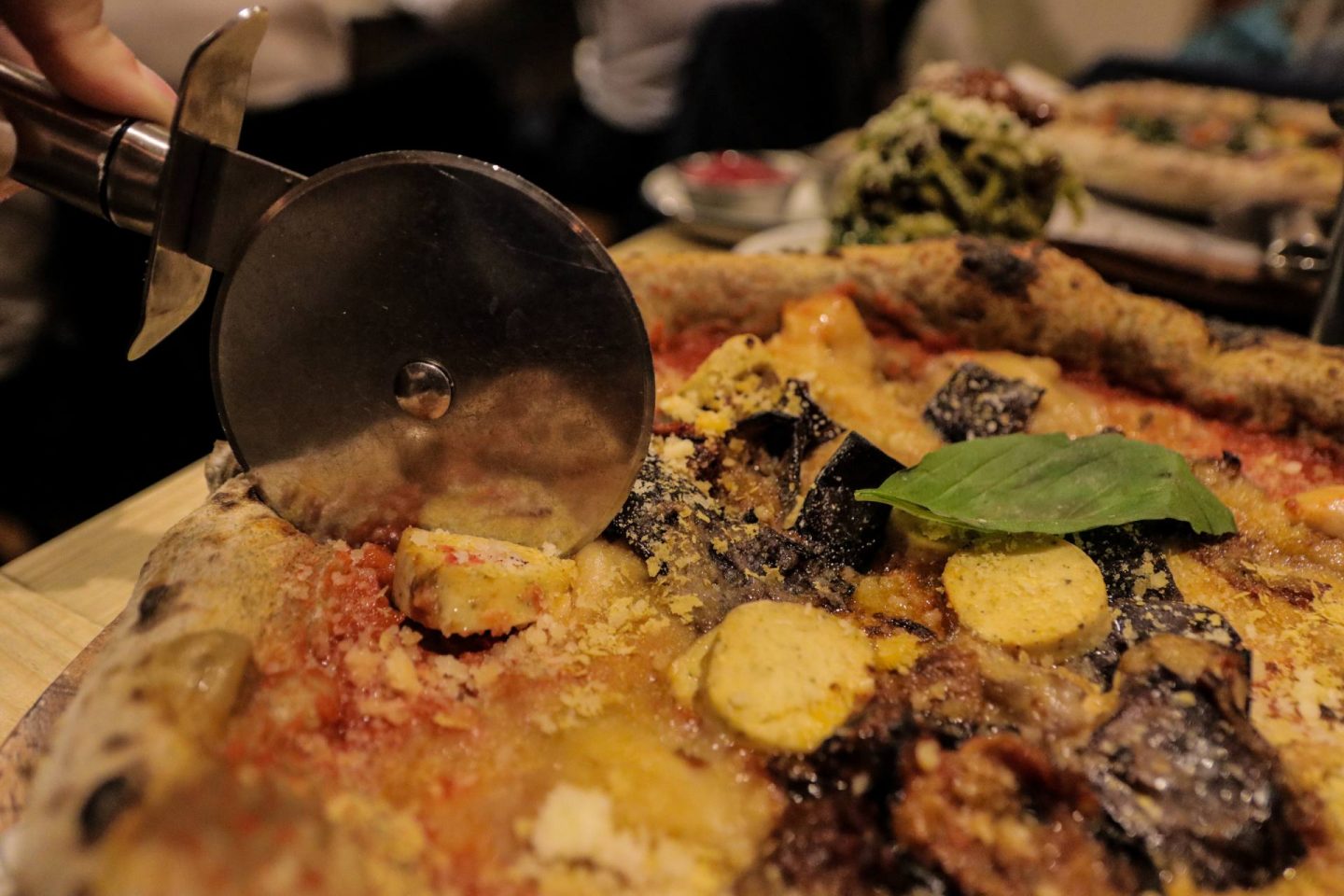 After must umming and ahhing, mind changing and having to stop looking at the menu as there were so many options I could have picked, I eventually went for the Parmigiana Party. This was topped with smoked mozzarella, fried aubergine parmigiana, sliced seitan sausages, topped with basil leaves and a dusting of nutritional yeast. I also tried the hemp base as it’s a more nutritional option, and tasted darn good too!

The cheese, we need to talk about the cheese! It was so much like eating ‘normal’ cheese that if you told me it was, I would have believed you! Purezza make all of their own cheese on site and they’ve recently purchased their own cheese factory as there is so much demand for people wanting to purchase their cheese, but it can’t be met within the restaurant that they are going to be able to sell it for take away purposes shortly. I’m gonna be waiting at the door the minute they open for this! 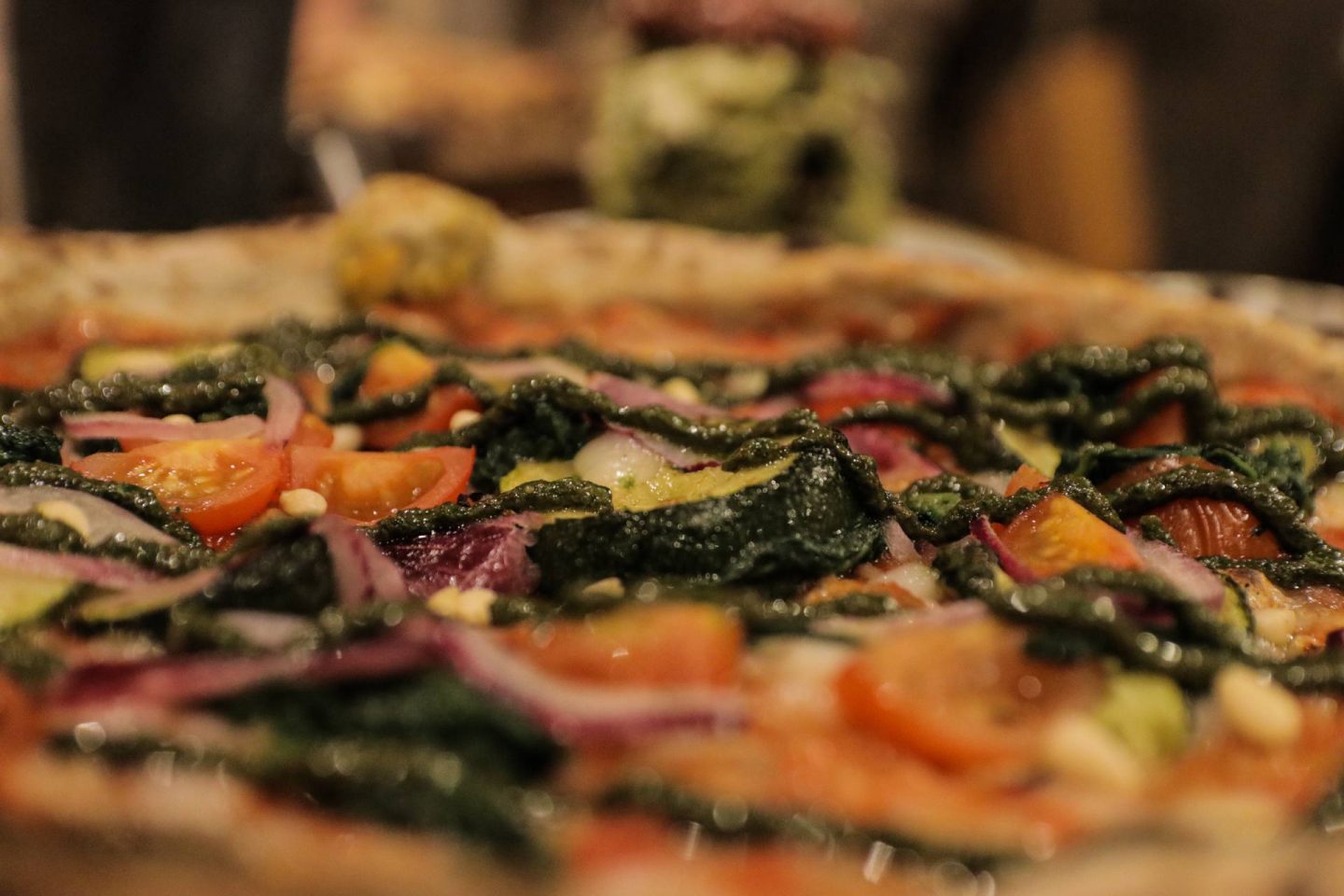 Mike decided on the Pesto Manifesto made with red onions and courgettes, a sprinkle of pine nuts, with spinach leaves and cherry tomatoes, finished with their freshly blended pesto. He devoured every morsel so I think he may have enjoyed it just a little! I’d take that as a huge compliment as this was the first fully vegan meal he’d ever eaten! 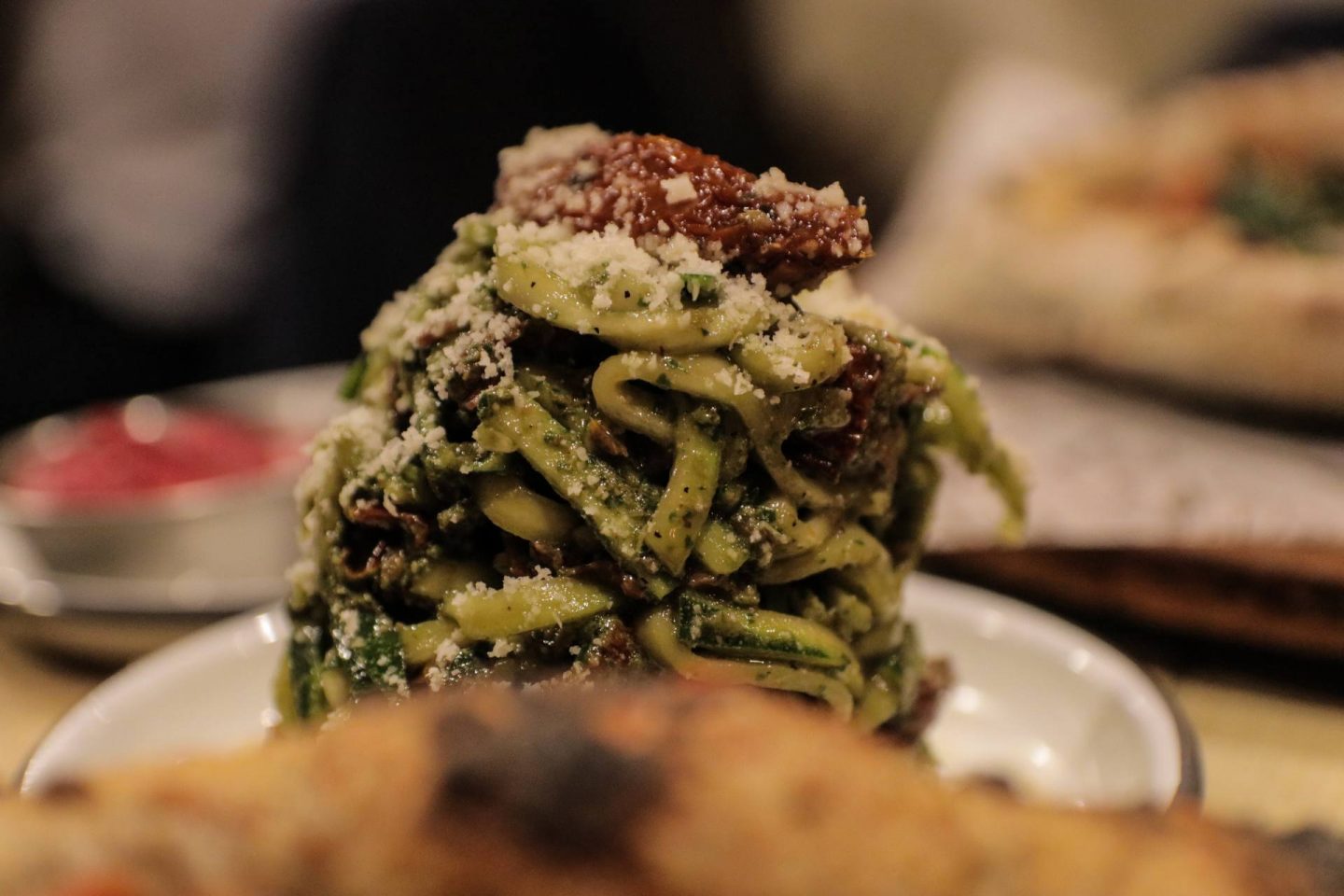 As sides we chose the raw spiralised courgettes mixed with a creamy pesto sauce and juicy sundried tomatoes as I’m quite the courgette fan and this was a really great way of having it. Something I’m 100% going to try at home! 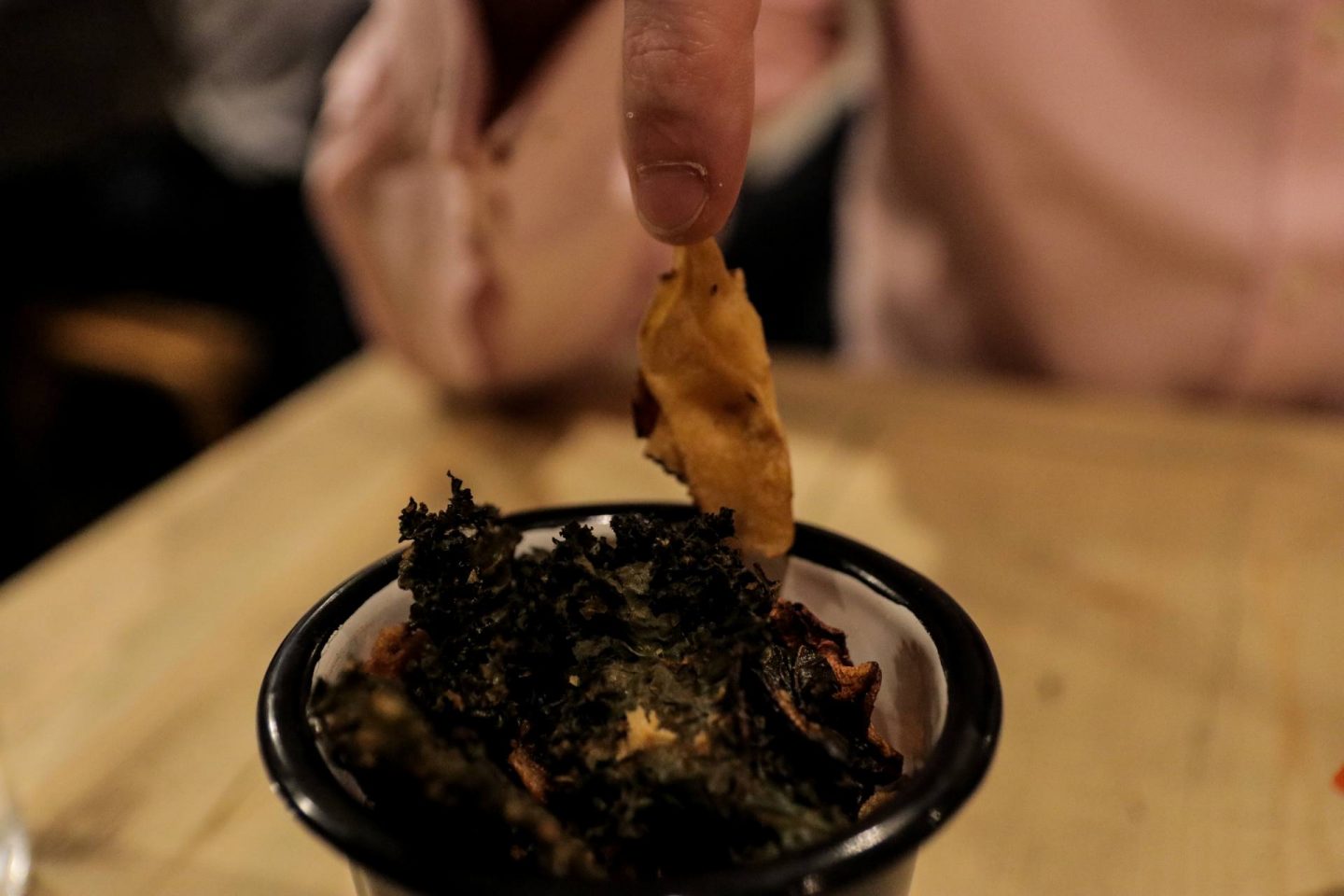 We also has a small portion of the Vegetable Crisps, which shows you can 100% take crisps beyond potatoes by using crunchy root vegetables with seasoned kale bites. They were really tasty and again, I will be trying to recreate at home as a healthier snack! 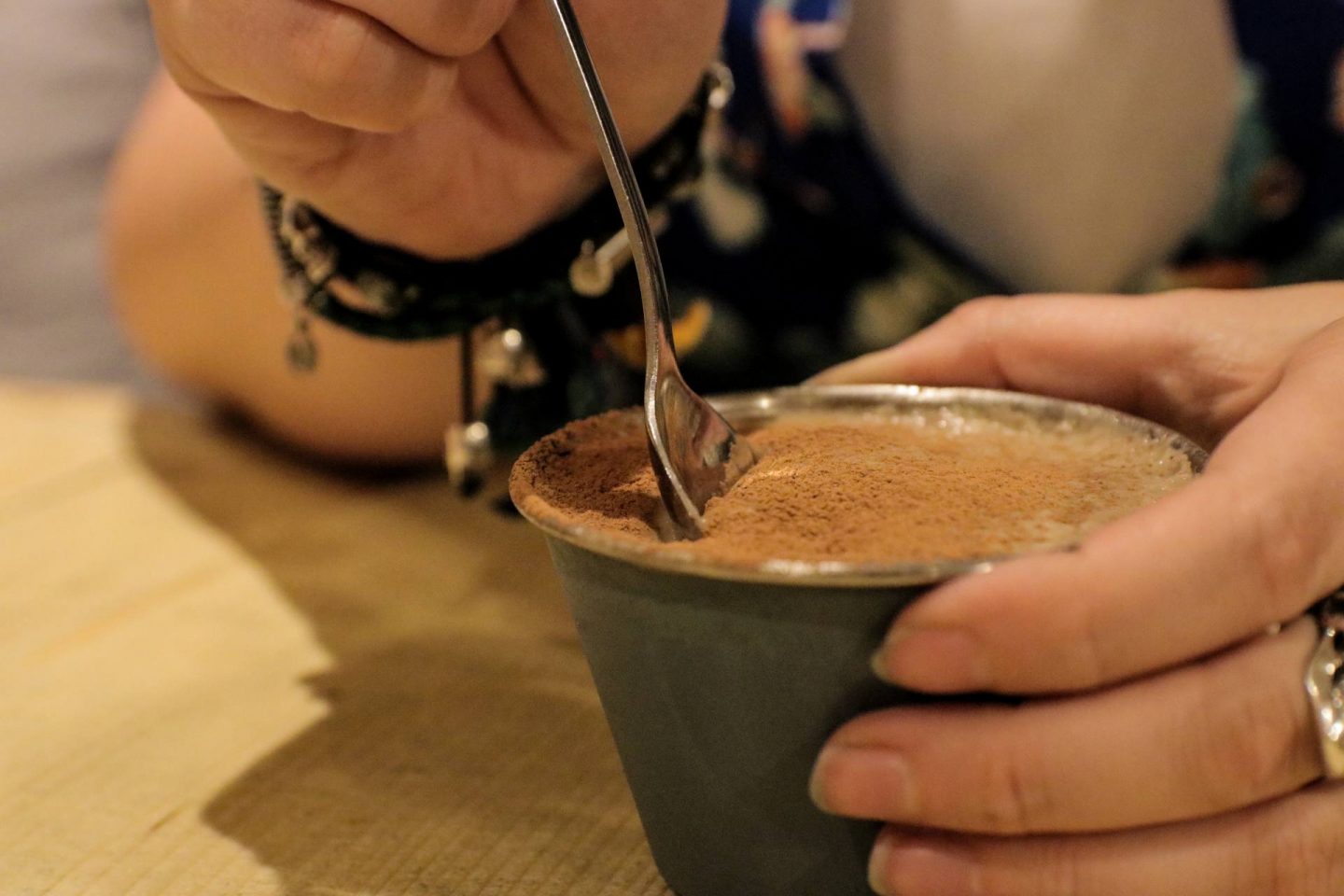 We were pretty darn full but for dessert we tried the Raw Tiramisu, which was made with a dates and almond base, covered with a creamy layer of cashews and cold brew coffee. It was something we had never tried before and didn’t really know what to expect but we enjoyed it none the less! 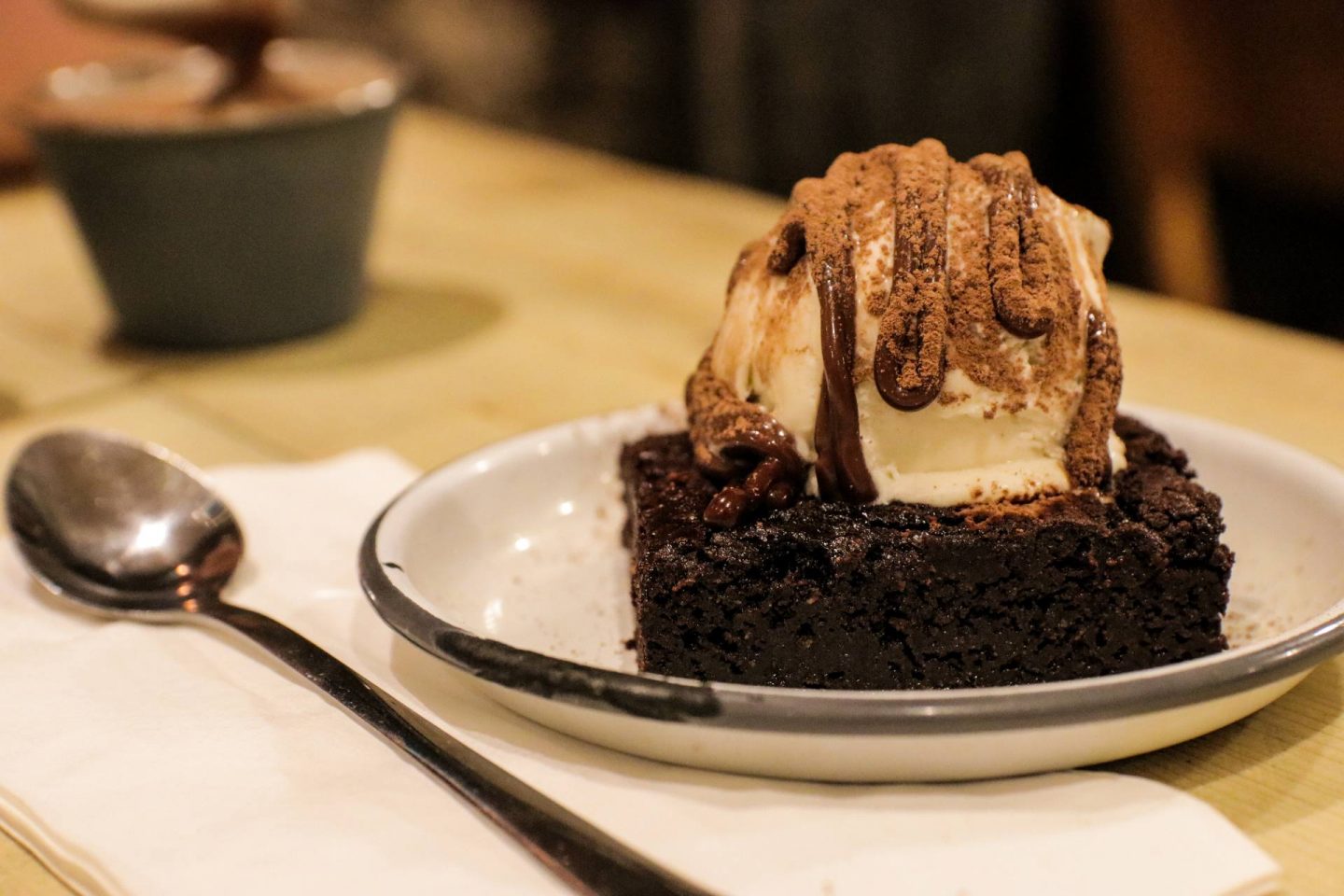 As ever there was a Brownie involved too, being made with rich chunky chocolate chip brownies with a delicate and spongy texture, served with a delicious dark chocolate sauce, I’d of had no idea that this was vegan as it didn’t taste much different to those that I’ve eaten made with egg!

This was a total win of a meal all round! We loved the food, the service was amazing and I’ve learnt that Mike can totally accompany me to more vegan restaurants for sure, as he enjoyed this so much and didn’t miss having meat on his plate! Great work Purezza!

Thanks to Love Pops Up London for organising.

Eating my Way Around East London with…

How Easy is it to be Vegetarian…