Long Overdue Cocktail Catch Up at Be At One, Spitalfields *

Sometimes a message will drop into your inbox and a friendship will kick off right where you left it, and then you realise it’s been almost eight years since you hung out properly, so that can only mean one thing right? A cocktail catch up! And there’s only one place that can happen; Be At One.

Rich and I met up at Spitalfields branch of Be at One, after not having seen each other in around 8 years, we needed somewhere casual, central and a good cocktail list. Crazy I know, but when life gets in the way these things happen, but after taking our window seats, we realised that something never change. 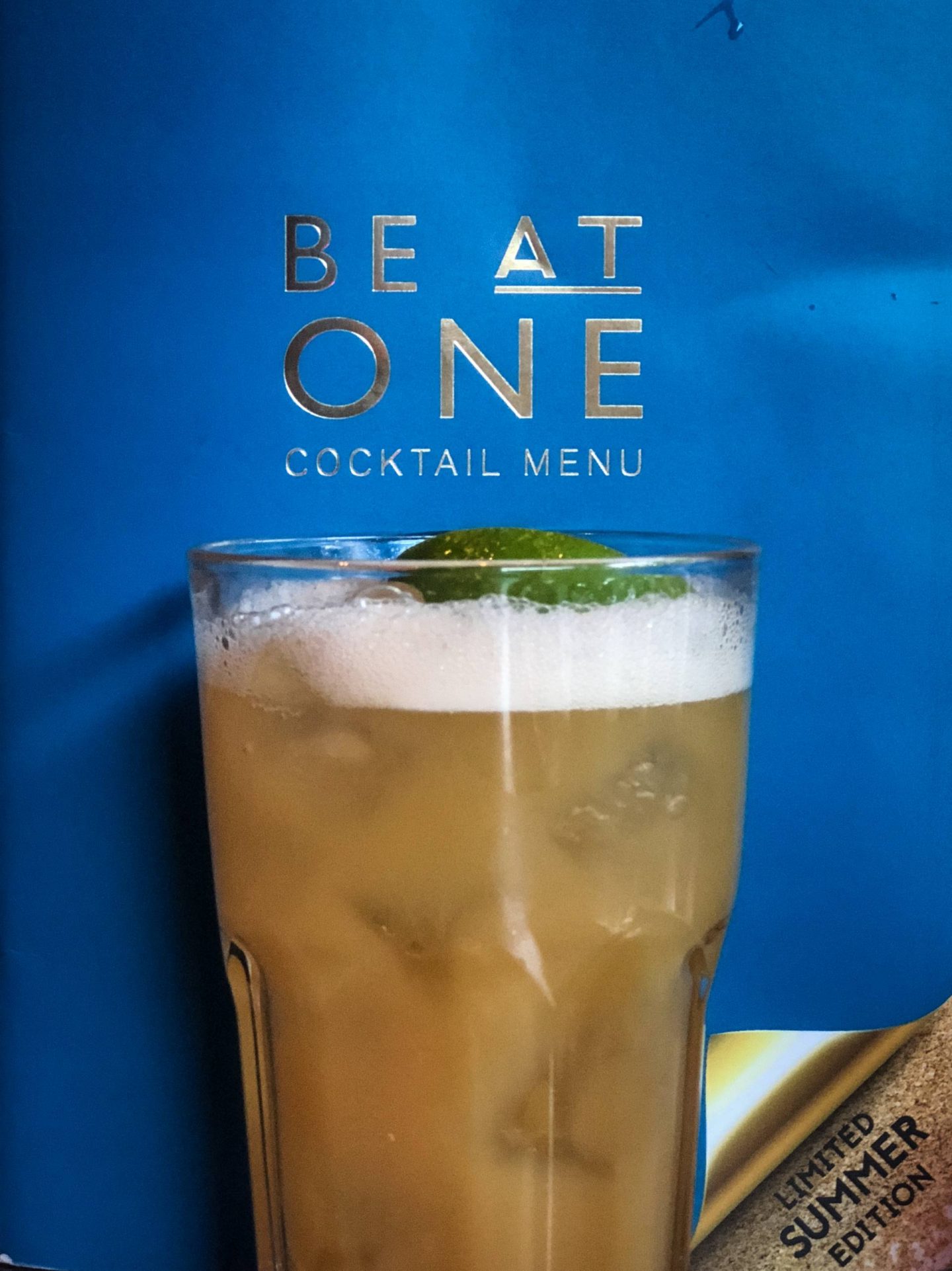 We picked up the Summer Edition cocktail menu and was quite overwhelmed by just how many we wanted to try, so you know what. We tried as many as we could starting with the Cuban Pussy made with Havana Club Especial rum, Cointreau, Chambord black raspberry liqueur, Cloudy apple juice, and Orange juice. What a way to start too, it was strong, it was punchy and it was very moreish!

Richard then moved on to the Negronita mixed with Olmeca Altos Reposado tequilla, Martini Rubino, Martini bitters and Grapefruit soda and I went in for a Strawberry and Rhubarb Daiquari as I felt it was more than needed as the sun was still shining outside. Daiquiri simply means rum, lime and sugar, which are three staples of Cuban life. This Strawberry & Rhubarb Daiquiri is mixed with Havana 3 yr old rum, Aperol, rhubarb, strawberry, passion fruit and lime. 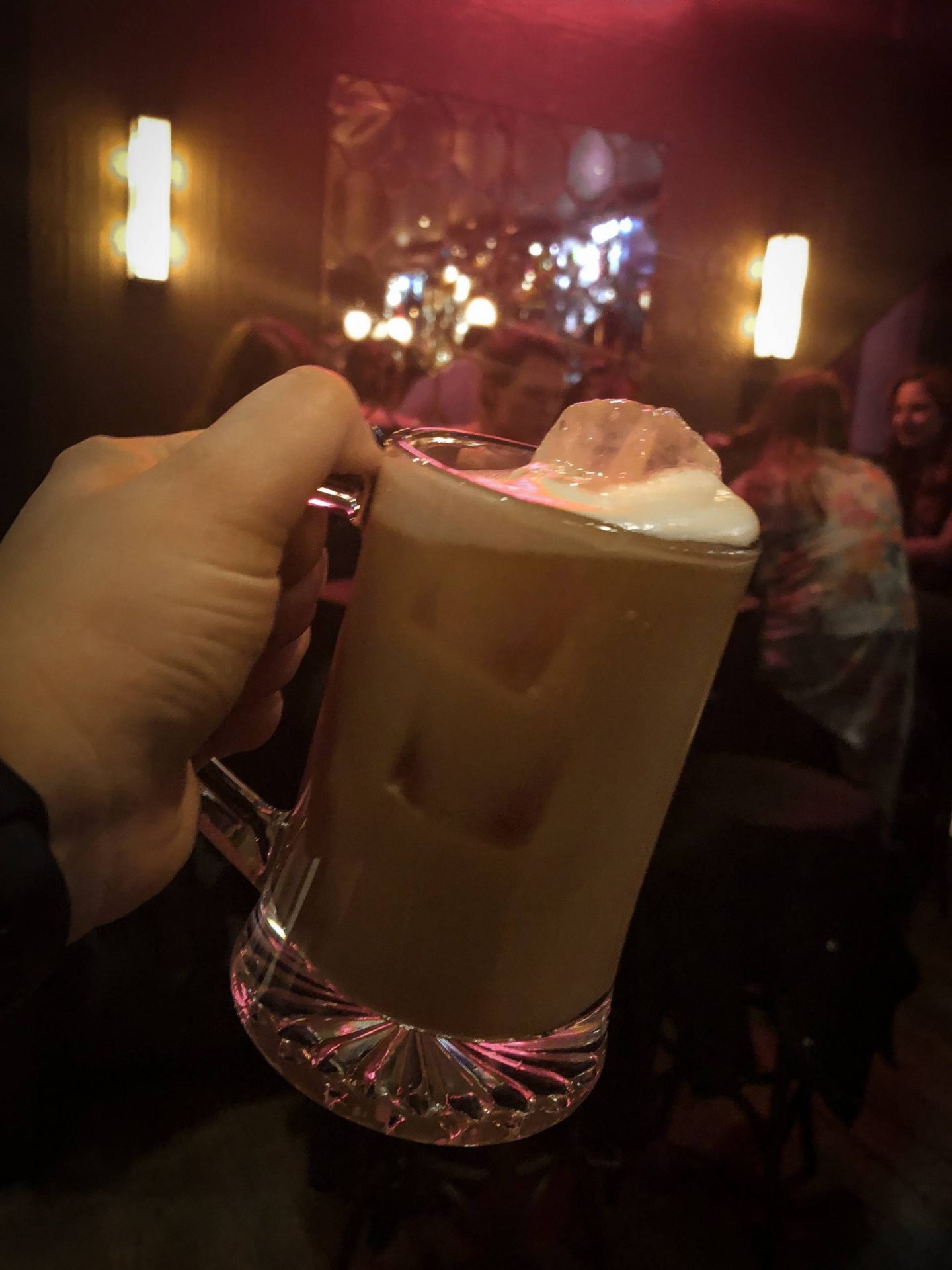 As we were about to order our next round of drinks, the lovely bar man asked if we were Harry Potter fans. So we had a good laugh at that fact that I’m not but I share my name with a Squib from the books, and we agreed to try the Back Flip which is based on Butter Beer and my god, it was so good! It reminded me a little of an alcoholic cream soda float which was a total win. 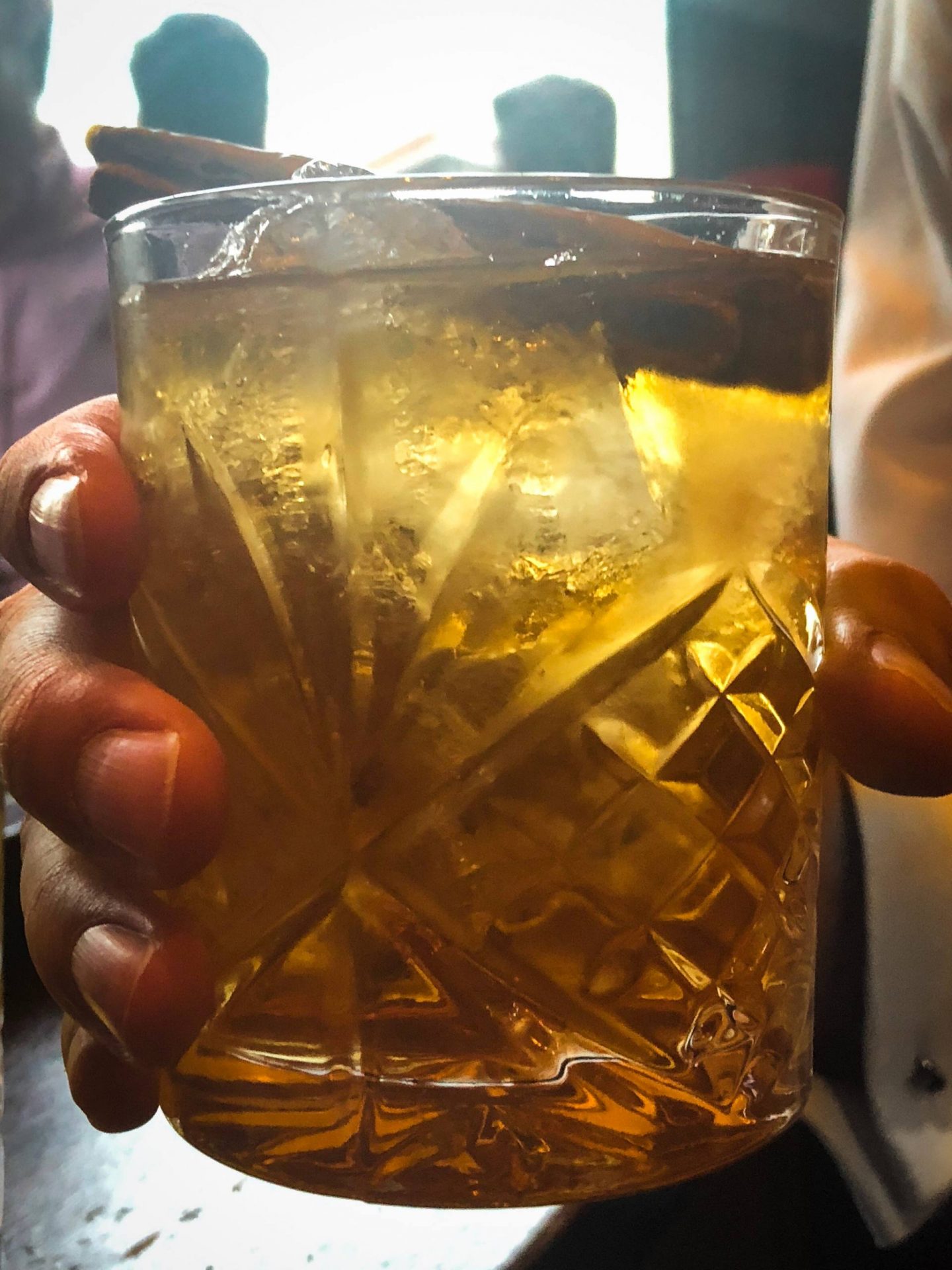 Our next round involved a very cool looking bevvy, complete with a cigar Twix that went down rather well after a few cocktials. The Cubans love dark rum and they love a good Old Fashioned, so stirring down some Havana 7yr old rum, plum sake and dry curacao gave this drink a really interesting twist. 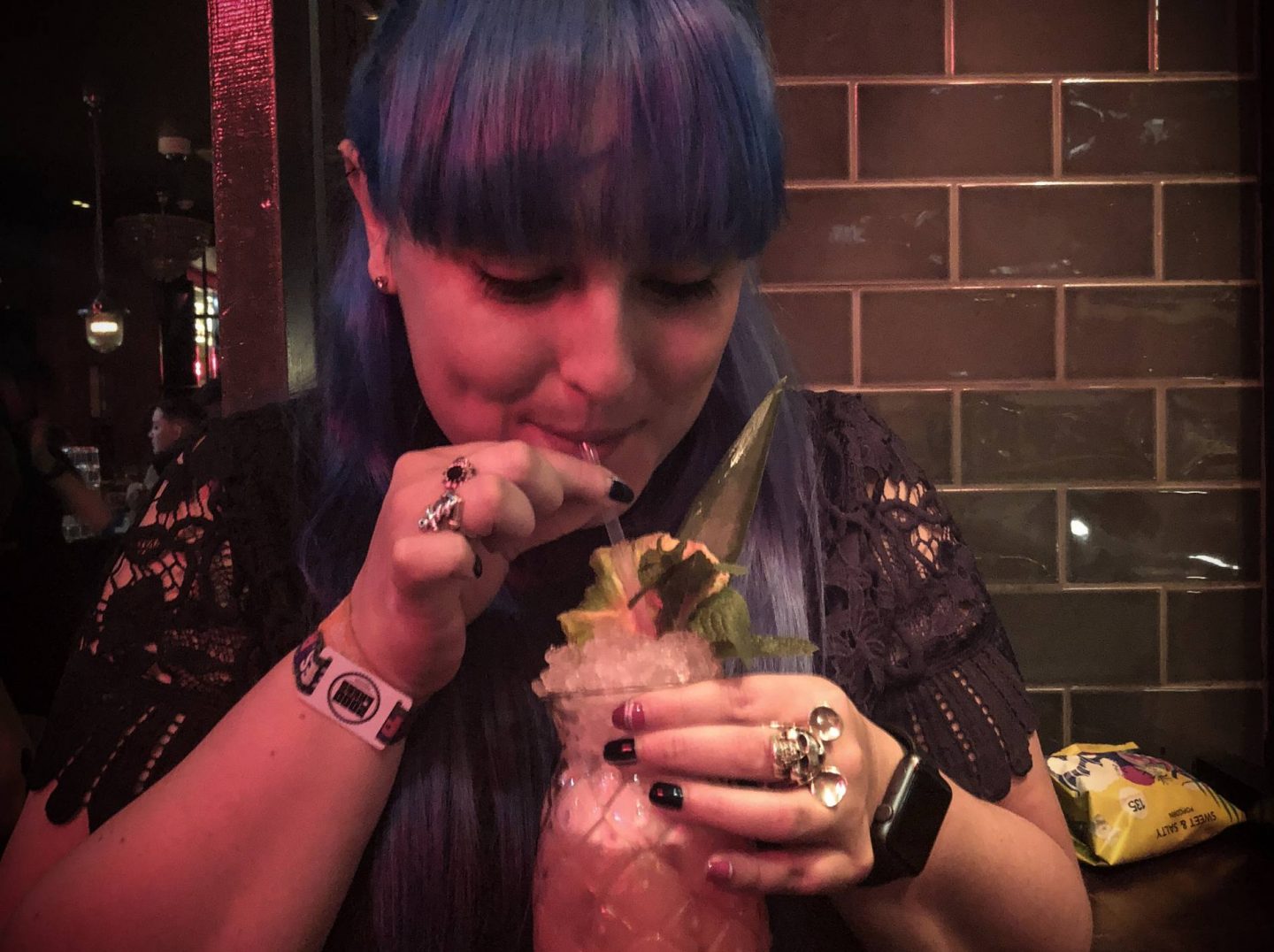 Carrying on with the rum theme; can you tell I like rum?! My next drink was a Jungle Bird made from Plantation Original Dark rum, Plantation 5yr old rum, Campari, Pomegranate, Pineapple, and Lime. This was so summery and I was so wishing I was sitting in Cuba drinking away, watching people dance and explore the stunning, colourful streets.

We couldn’t let Richard visit a cocktail bar and not have a Singapore Sling before he visits the original creators at Raffles in Singapore this month. A classic Sling is made with quite a mix of Beefeater Gin, Cointreau, Bénédictine, Cherry liqueur, Pomegranate, Pineapple, Lime and Angostura bitters.

I decided to take a step away from the rum and hit up the aptly named Shoreditch Sangria, made with Plymouth Sloe gin, Malbec wine, Pomegranate, Spiced Pear, Orange, Blackberries, and Angostura bitters. It’s a lot more sophisticated that your usual Sangria and having just got back from Spain, I welcomed this change with open arms and a very empty glass at the end of it.

Our final drink was the Banoffee Old Fashioned made with Bulleit bourbon, white chocolate liqueur, banana syrup and banoffee foam. And it was a great way to end the evening as it was rather light, filled with flavour and spot on sweetness.

As our drinks came to an end, we wrapped up the convo that hadn’t stopped all night as we had so much to catch up on and decided there was only one way to bring our evening to a close… 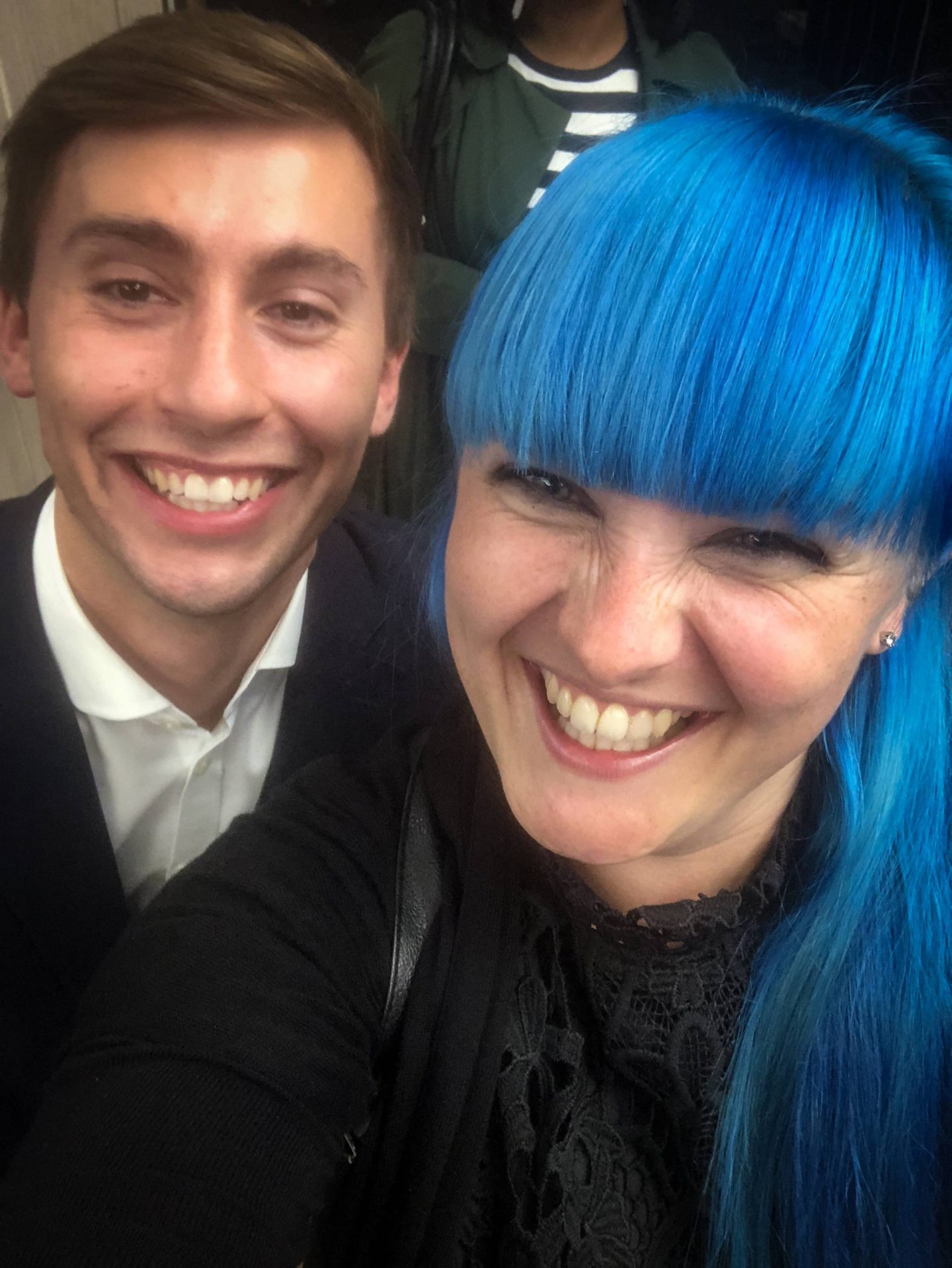 ….taking selfies in the queue for McDonald’s and then the running for our trains!

We had such a great evening with Be at One; the service was impeccable, every drink we tried was brilliant and believe me we tried enough of them to know and the venue had a great atmosphere with banging tunes playing.

We’ll see you for our next catch up Be at One, and we won’t be waiting eight years for that this time around!