Eating my Way Around East London with Eating Europe *

This venue has now closed.

What better way to spend the first Monday of the year than exploring the East End of London with the wonderful Flick from Eating Europe.  Eating Europe have welcomed over 25,000 guests on their fully immersive culture and food tours in London since they began back in 2013. One of their team members will take you exploring the diverse neighbourhoods around London, they’ll introduce you to the best food that has all been tried and tested by the very team themselves, they tell you stories that have shaped each of the dishes you try and the people who are making them for you.

But this tour isn’t just about the incredible food, it’s also about the crazy, unique history of East London. The area is filled with Jewish influence, Bangladeshi influence and Italian influence and it makes it the wonderfully multicultural hub that it has become today.

But onto the tour that I experienced… 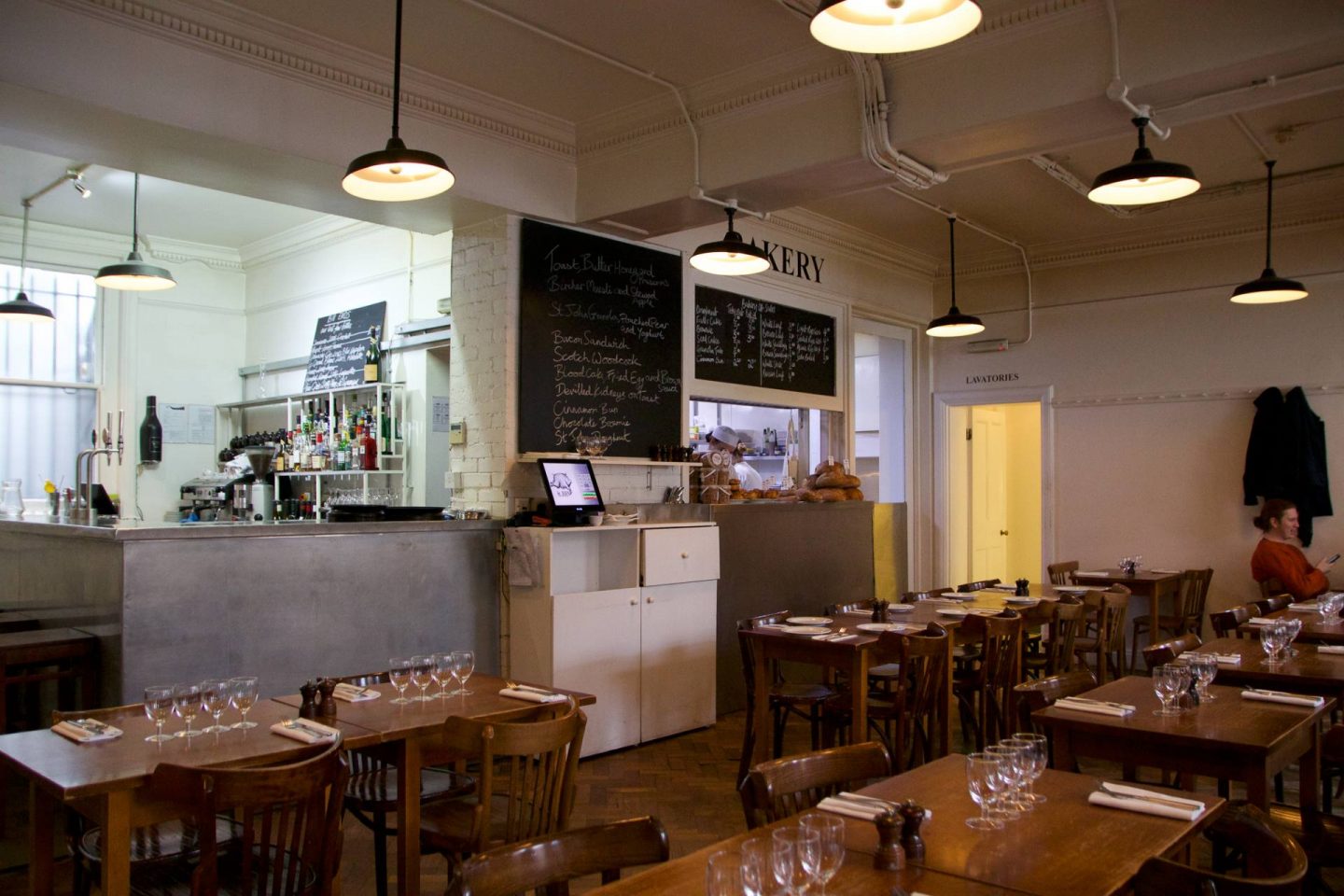 Our first stop was a mere minute or two from our meeting point close to Liverpool Street that took us into the whitewashed walls of St John’s Bread and Wine. This was originally meant to be a home for their incredible bakery but there was quite the need for a new restaurant in the area so this dining room, wine and bakery shop was born. 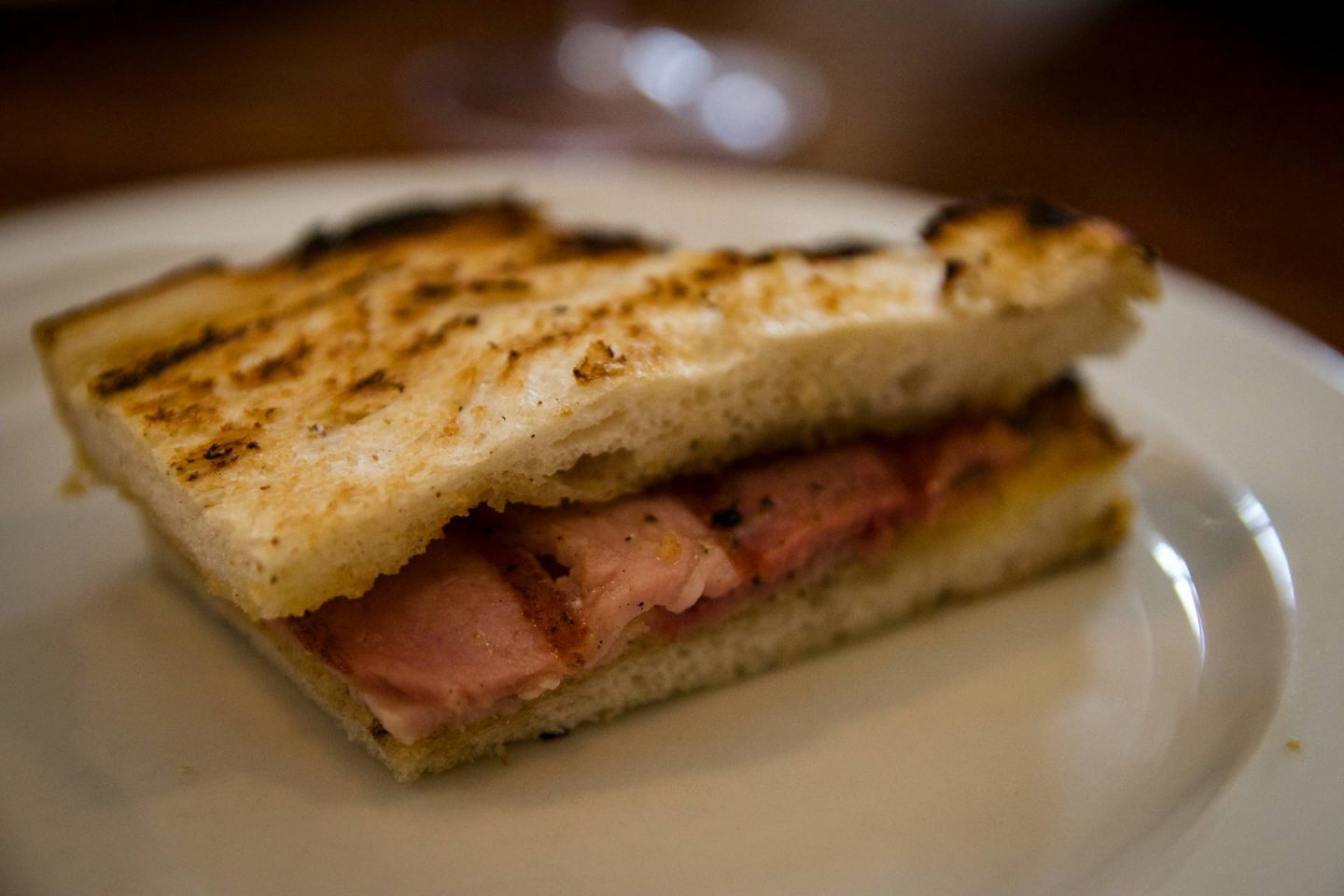 We stopped to try what has been deemed the best bacon sandwich in London and I can confirm this homemade bread and un-smoked meat both charred to perfection on an open fire with a liberal smear of butter and homemade ketchup on the side it is quite literally the dream. 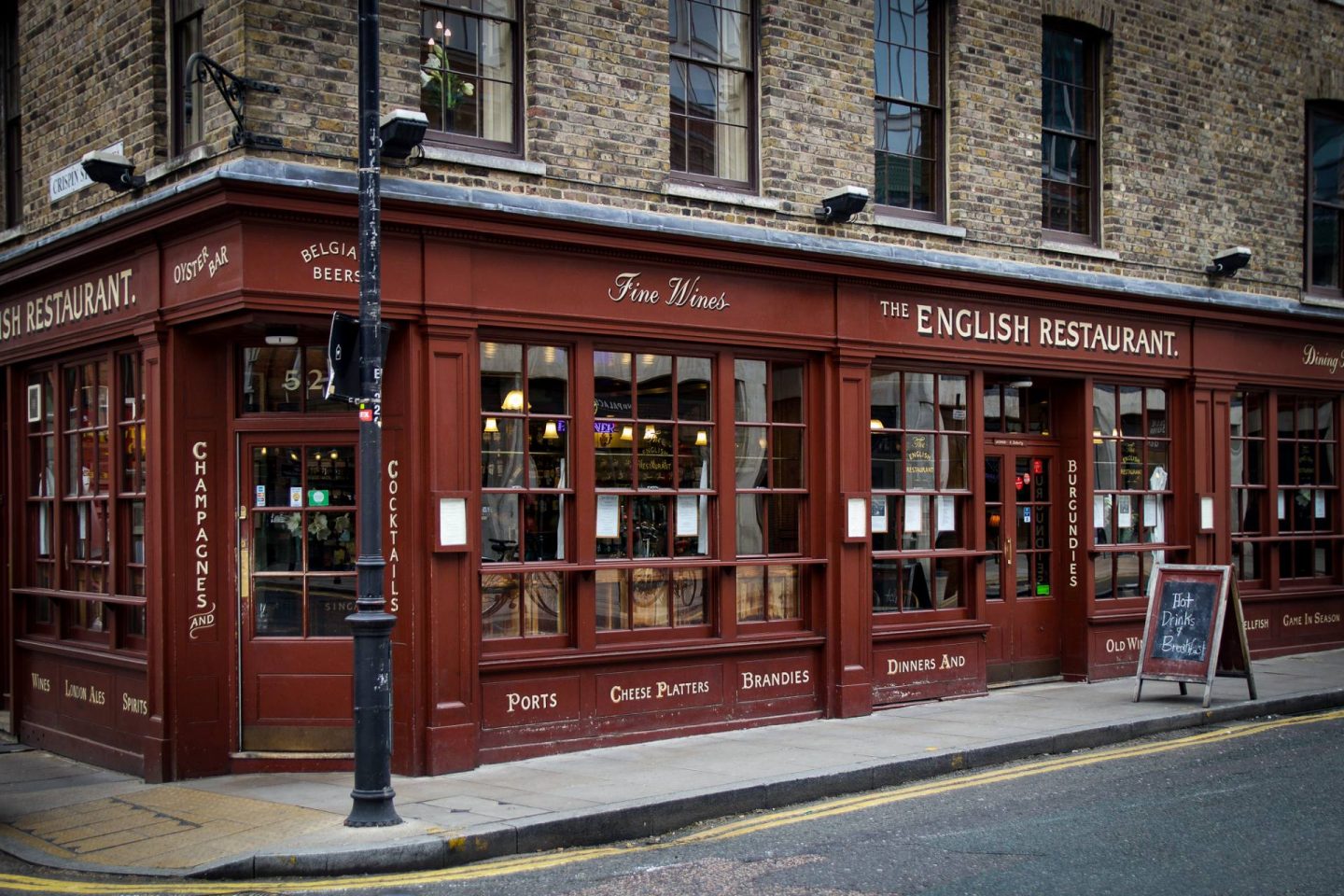 Our second stop was to the incredibly quaint, family-owned English Restaurant that has pews from the Christ Church, Georgian panelling and a bar that comes from a Victorian pub. It’s everything you’d expect from a restaurant with such a name. 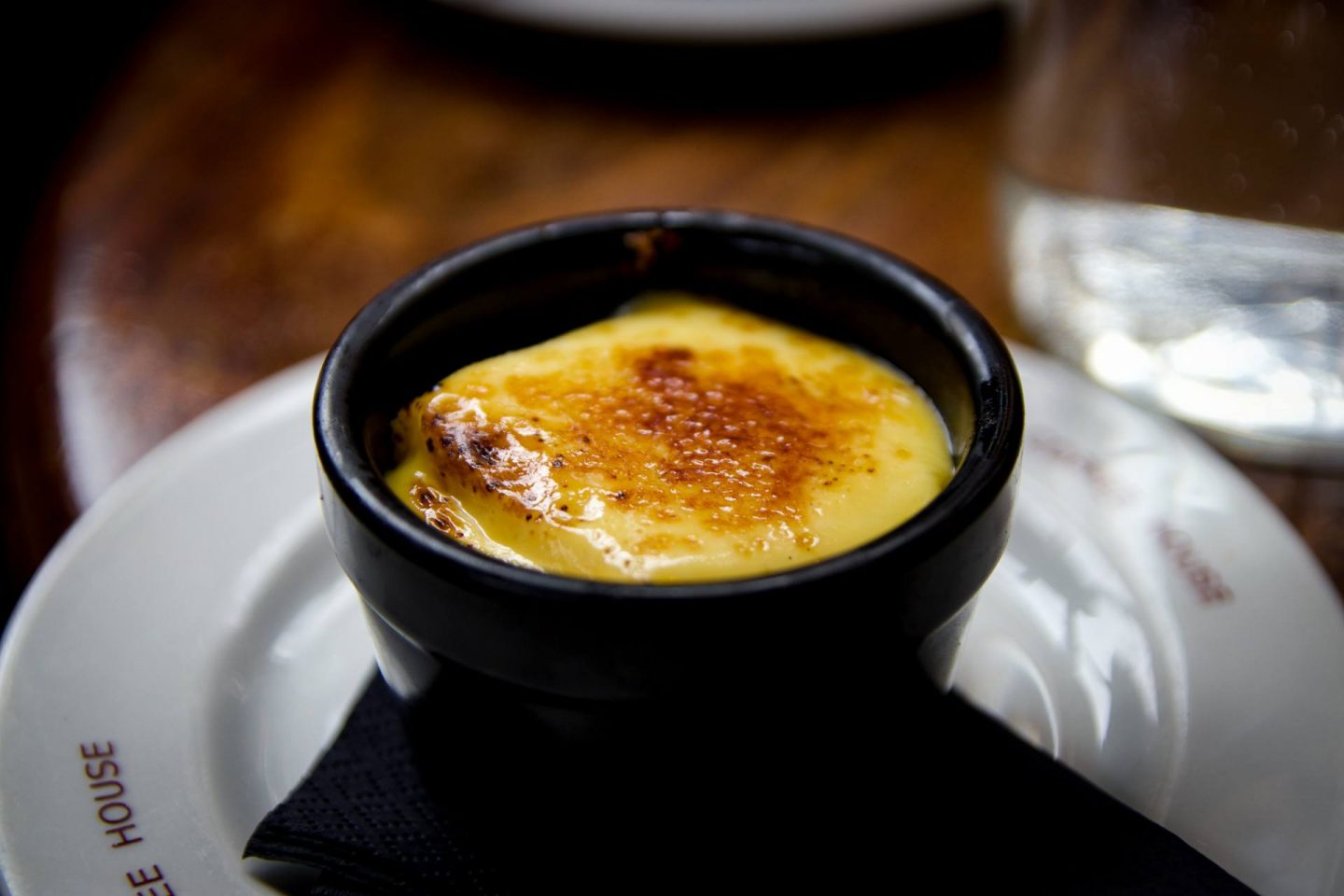 We were there to try the bread and butter pudding, something I’ve never really dabbled in as I wasn’t sure if it was something I was going to like. I was wrong, with a helping of custard and a recipe that has been used for many years, I was more than won over! 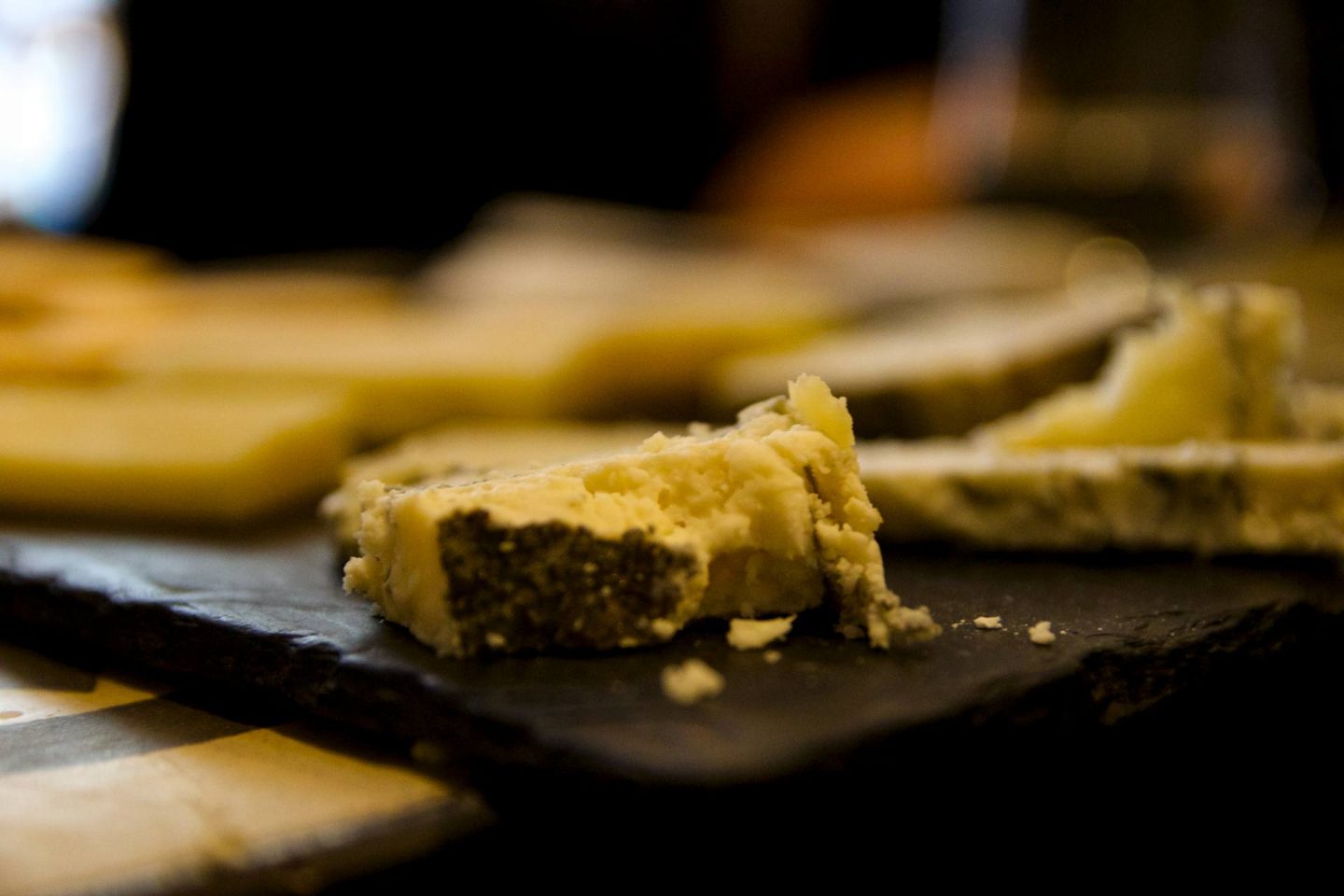 Our third stop was to somewhere I wasn’t aware of, but is now fully on my radar; Bedales of Spitalfields. It’s home to over 400 wines and is the perfect place for not only wine but a morning coffee, a quick lunch, and of course, after work drinks. We were there to try some amazing cheese from Neal’s Yard Dairy in the form of a cheddar, a blue and a red Leicester. All were divine and I may have gotten a takeaway pot as it was too good to leave any. 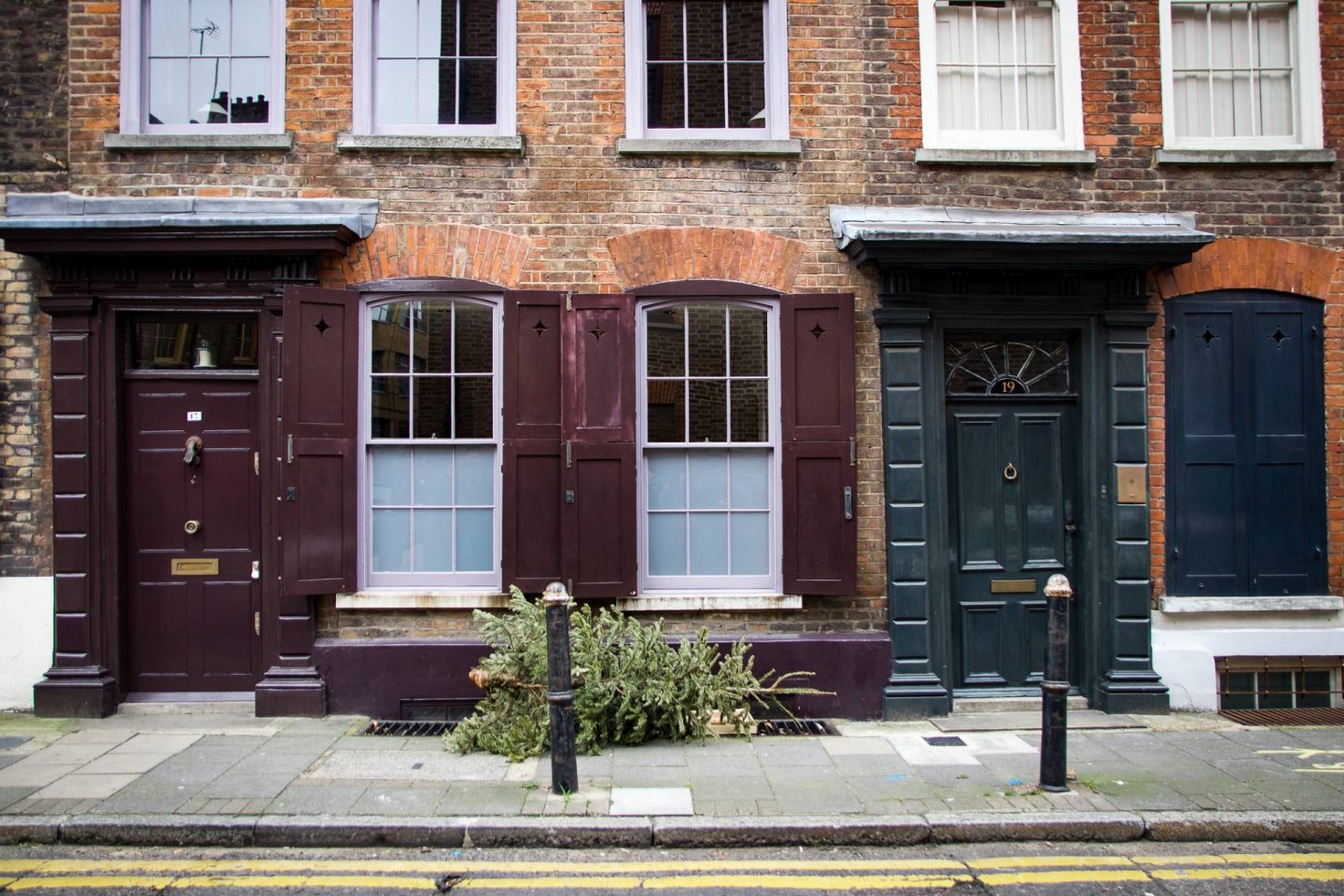 We then had a short history lesson about the wonderful soup kitchen that was run for the Jewish by the Jewish on Brune Street that ran all the way until the 1990’s, where these parts of East London had been used in films and tv shows, and how a very familiar face from tv pays a fortune to live on a street that was once where only the poor would live. 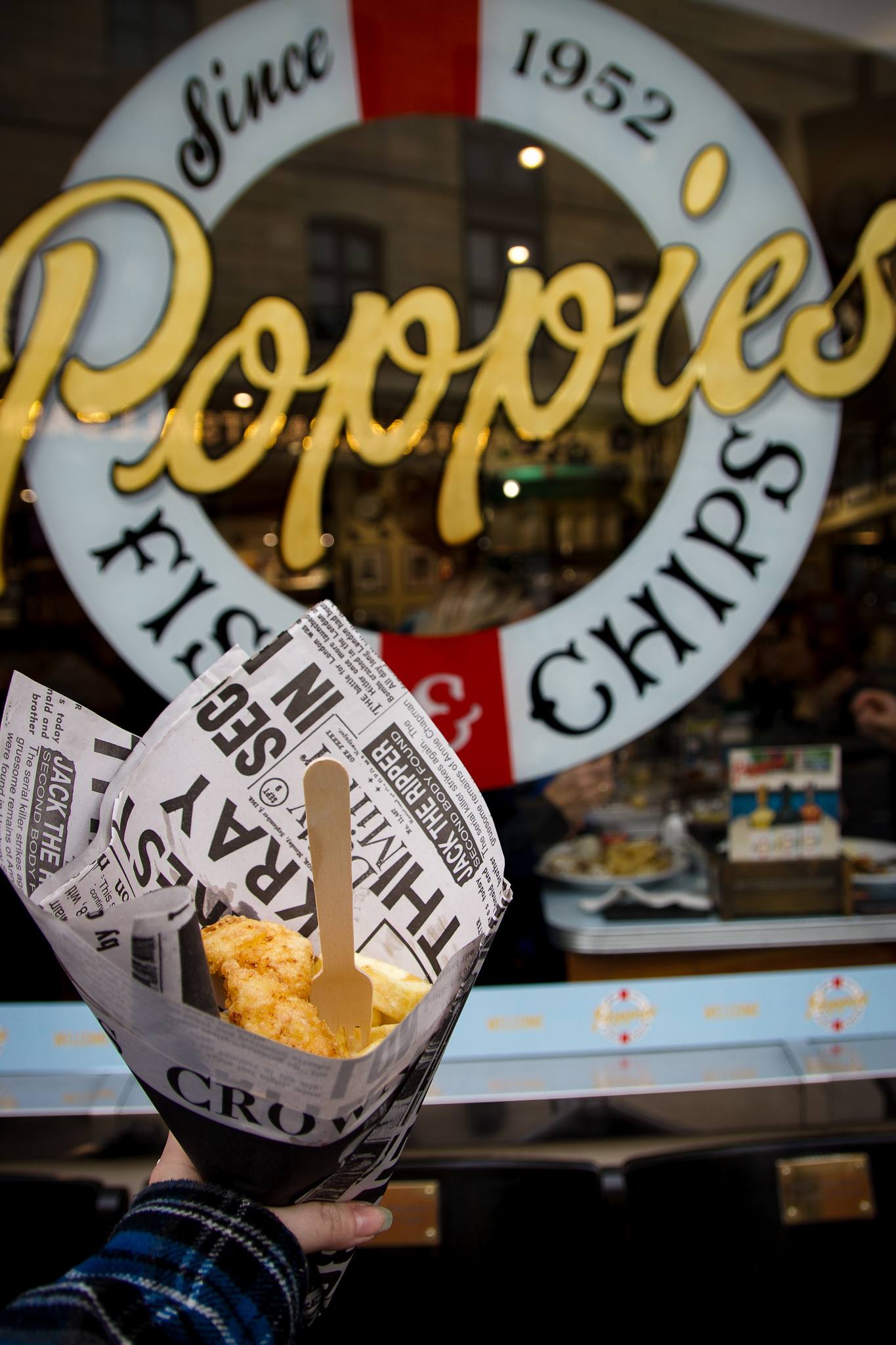 We couldn’t be touring the East End without a stop at what’s become a bit of tourist hot spot, which is why I’ve never stopped there before. I tend to keep to the independent places around town, but I was soon to be proven wrong and learn some fact about the owner that will have me going back.

Poppies is an award-winning fish & chip shop that is run by Pops, an Eastender that is so dedicated to the East End that he won’t work in the Camden or Soho branches! That kinda won me over a little, I’m not going to lie. But also, the amazingly light batter on the fish and the fluffy on the inside and crispy on the outside chips had something to do with it too. 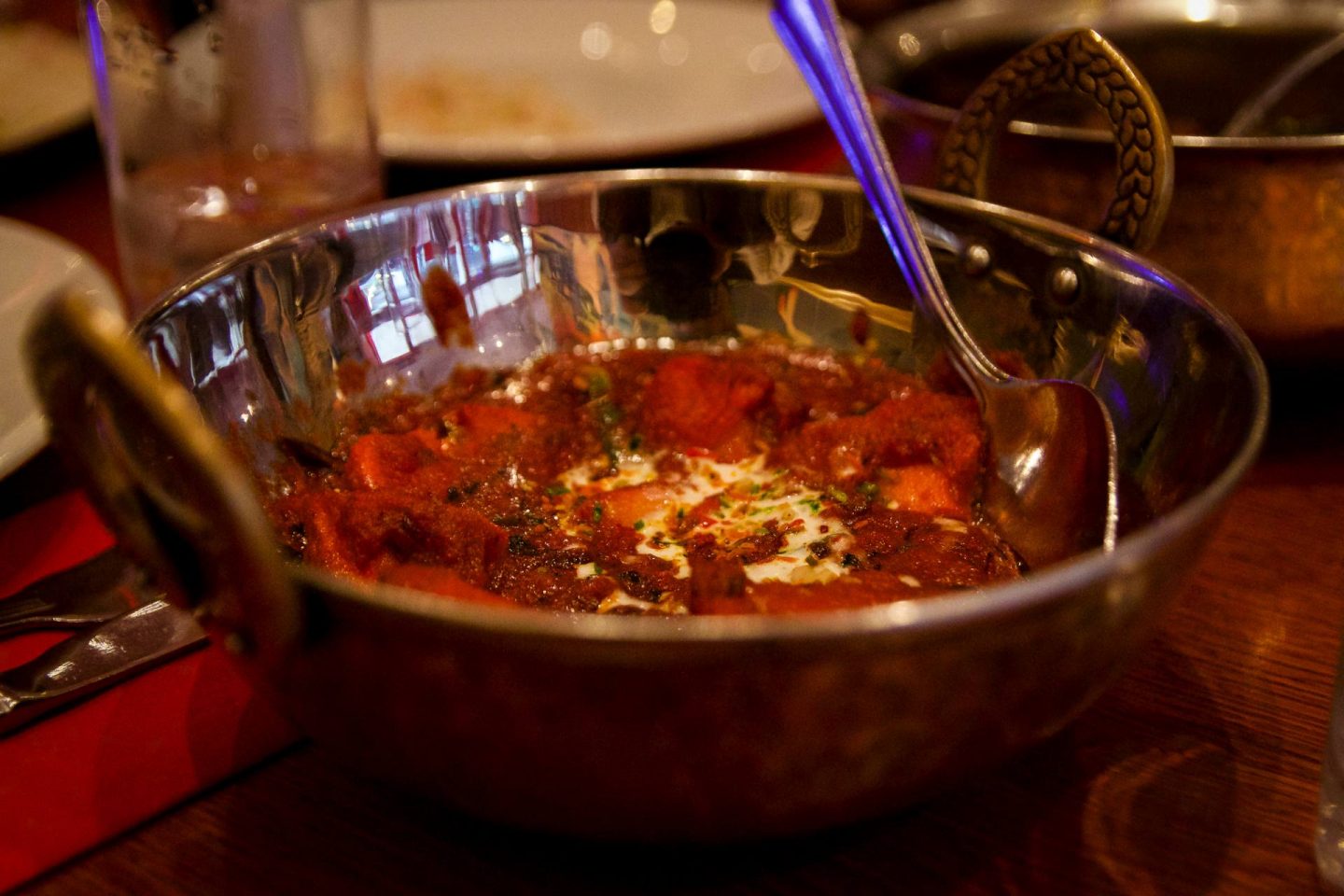 Our next stop, yes, we did a lot of eating, was Aladin’s on Brick Lane having been listed by the BBC as ‘One of the World’s Best Curry Houses’, winner of the “Taste Brick Lane Curry Awards” and crowned “Best Curry House in Brick Lane” by Celebrity Chef Ainsley Harriott with the Mayor of Tower Hamlets to name but a few; they had a lot to live up to. But boy oh boy did they! The three dishes we tried out; a vegetarian curry, a chicken tikka masala and the most melt in your mouth lamb curry that was more than worth of all of those awards. 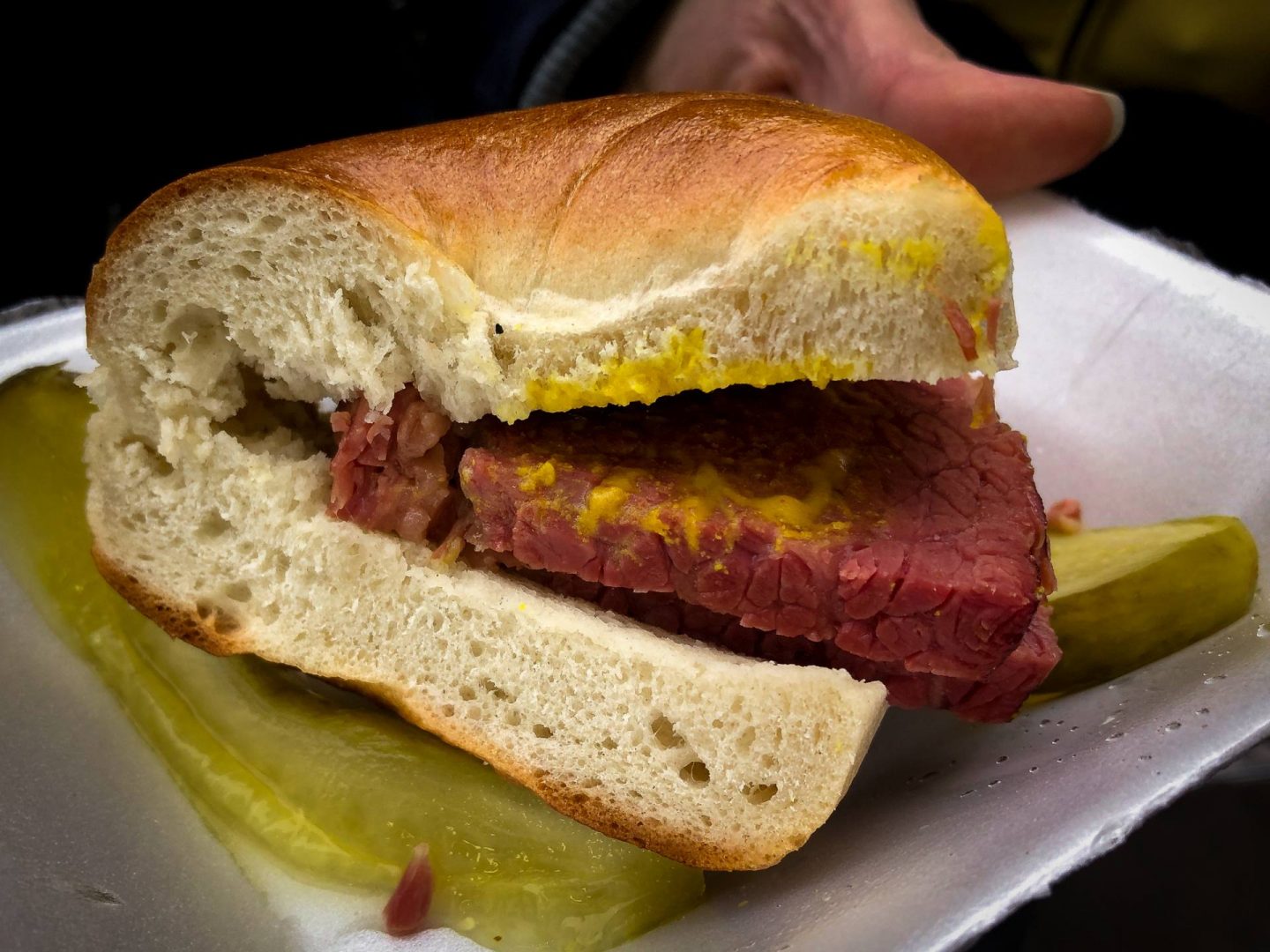 The famous salt beef beigel from the best Beigel Bake on Brick Lane, this is always a winner for me. I’ve never just walked in and been served right away no matter what time I’ve visited which goes to show I’m not the only one that thinks this place fully deserves to be the establishment it’s become. I’ve also got a big place in my heart for their salmon and cream cheese bagel too. 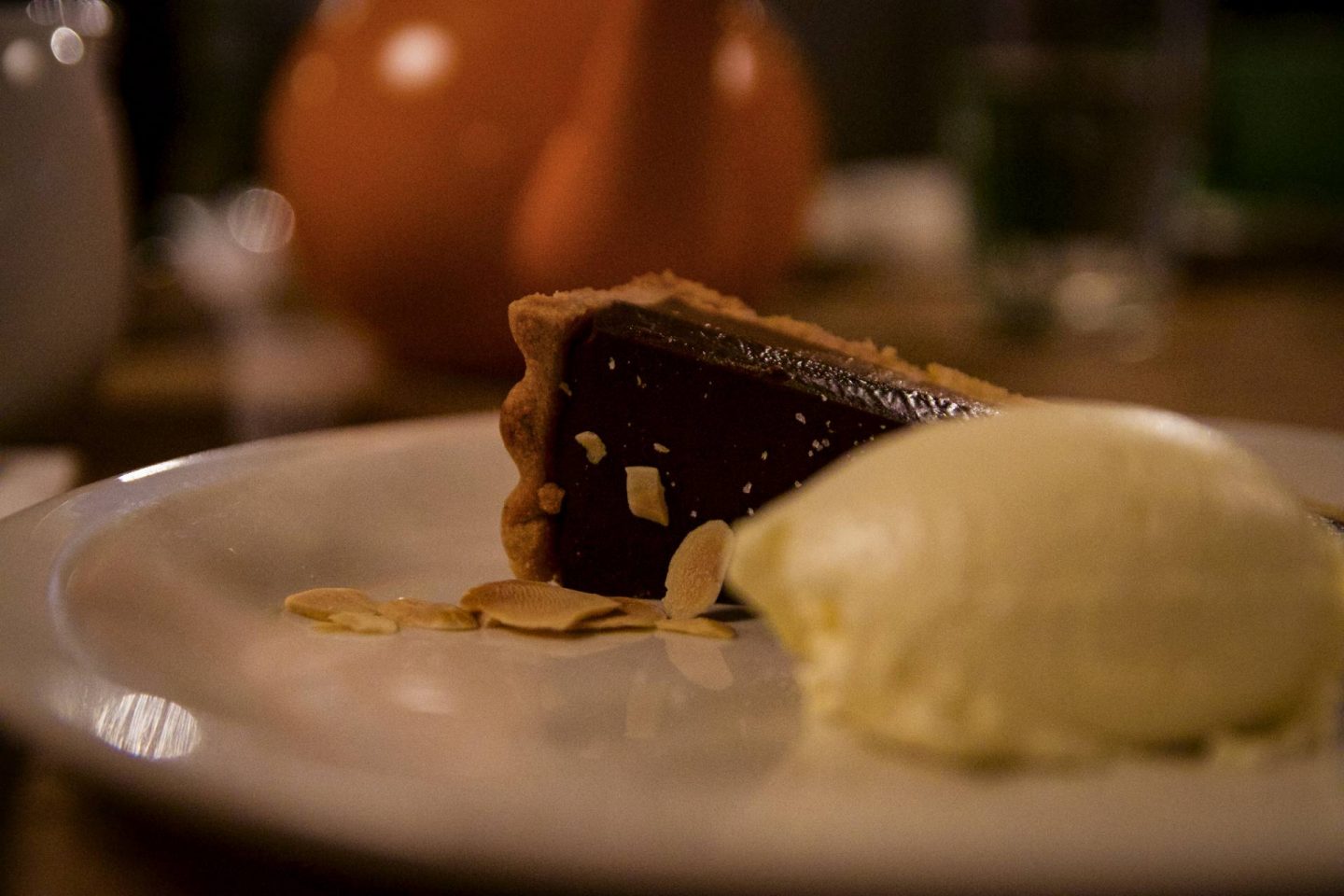 The very last stop was one that was a little unexpected; Pizza East, but not for the pizza. We had stopped there to try their Salted Chocolate Caramel Tart. This isn’t something that I would have associated with the East End but it was really good and it was nice to end the tour on such a sweet note with a cup of tea.

The tour was such a fun way to spend a day, our guide Flick made us all so at ease, in fact she felt like a best friend that loved to chat about history and eat good food, and who doesn’t want a mate like that!

I’d highly recommend taking a tour with Eating Europe as it’s such a great way to see a city and experience somewhere new.