Dining at The Olive Tree at the Queensberry Hotel, Bath

As you will have seen all of my praise for our recent stay at the Queensberry Hotel, then it’s only fair that their incredible restaurant, which it gained a Michelin Star in 2018, The Olive Tree, gets a look in too! Having been subject to a very luxurious refurbishment in 2015 the restaurant oozes sophistication with a very modern feel.

The staff welcome you as you stroll in from the upper floors and seat you just far enough away from your neighbours so you can’t hear their conversations, but not that far away you feel lost in the space. This appeals to me as I often feel I choose strange conversation topics and I like to not disturb others.

I chose a great bottle of the 2017 Muscadet de Sevre et Maine, Sur Lie du Cleray from the Loire Valley as we had decided to not have a Marlborough Sauvignon Blanc for once!

As advised by both the General Manager of the hotel and the restaurant manager, we chose to do ‘five’ and ‘seven’. These are the two tasting menus that are the brainchild of award-winning head chef, Chris Cleghorn, who honed his superior skills as the protégé of a trio of world-renowned Michelin Star chefs, Heston Blumenthal, Michael Caines, and Adam Simmonds. 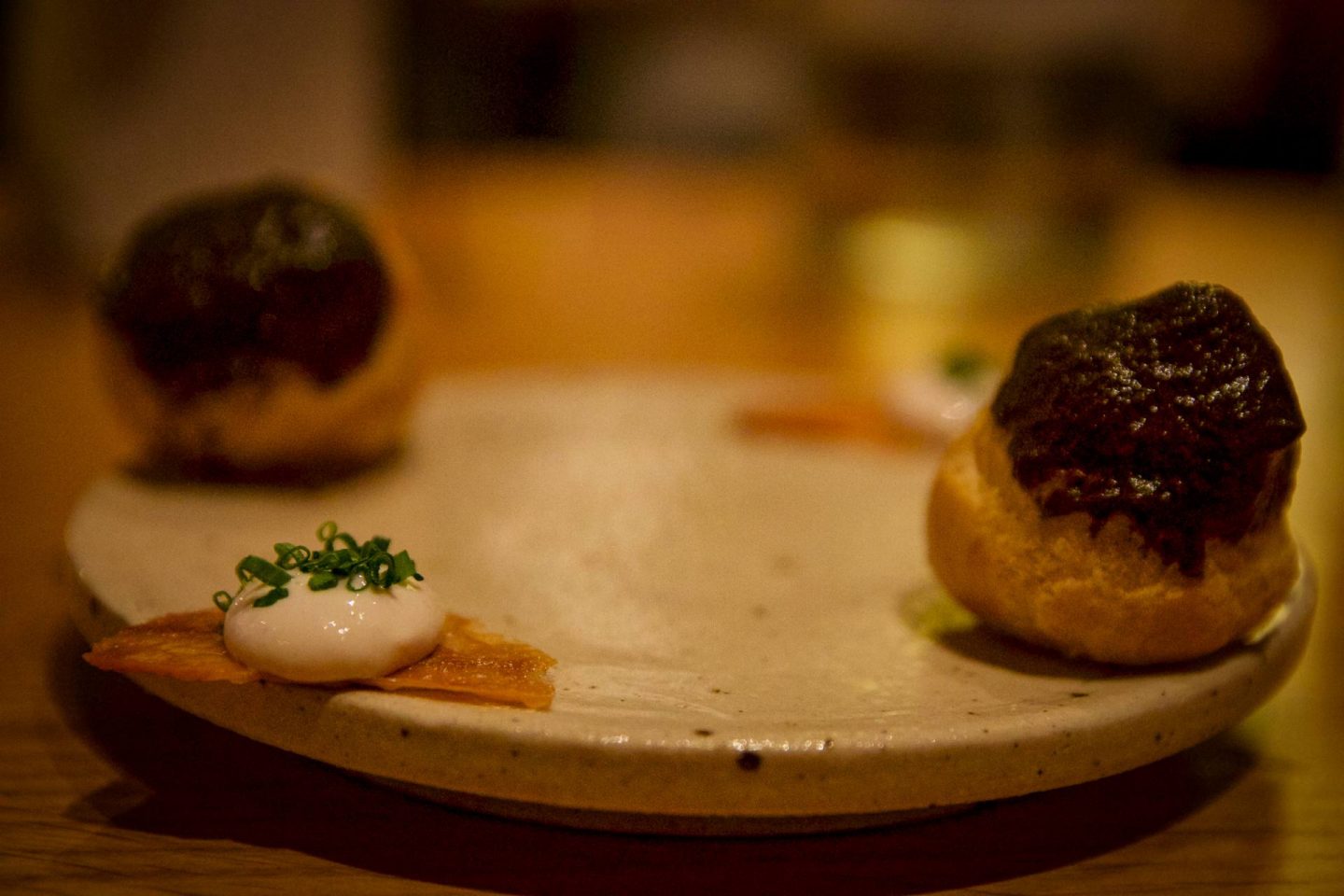 Both of our menus received an appetizer of ricotta and truffle style profiteroles with chicken skins that were divine and a great way to kick off the evening.

As we had so many, different divine courses I’m going to take you through both menus separately. 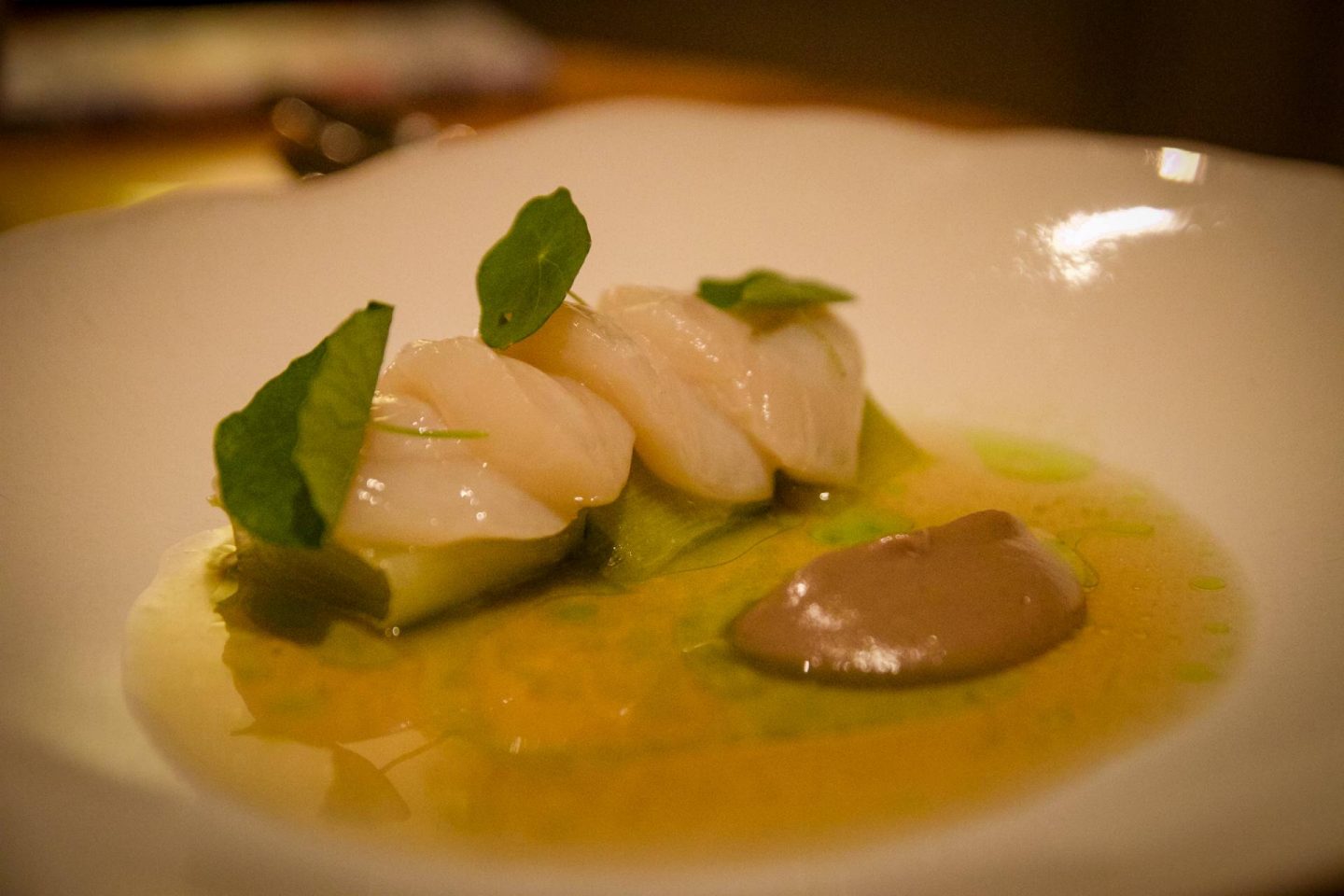 Raw Orkney scallop with leek, mushroom, seaweed tea and nasturtiums. Part of the reason I went for the ‘seven’ menu was the fact there were scallops involved and I was far from disappointed with how they were served and tasted. The seaweed tea being a particular highlight from this dish. 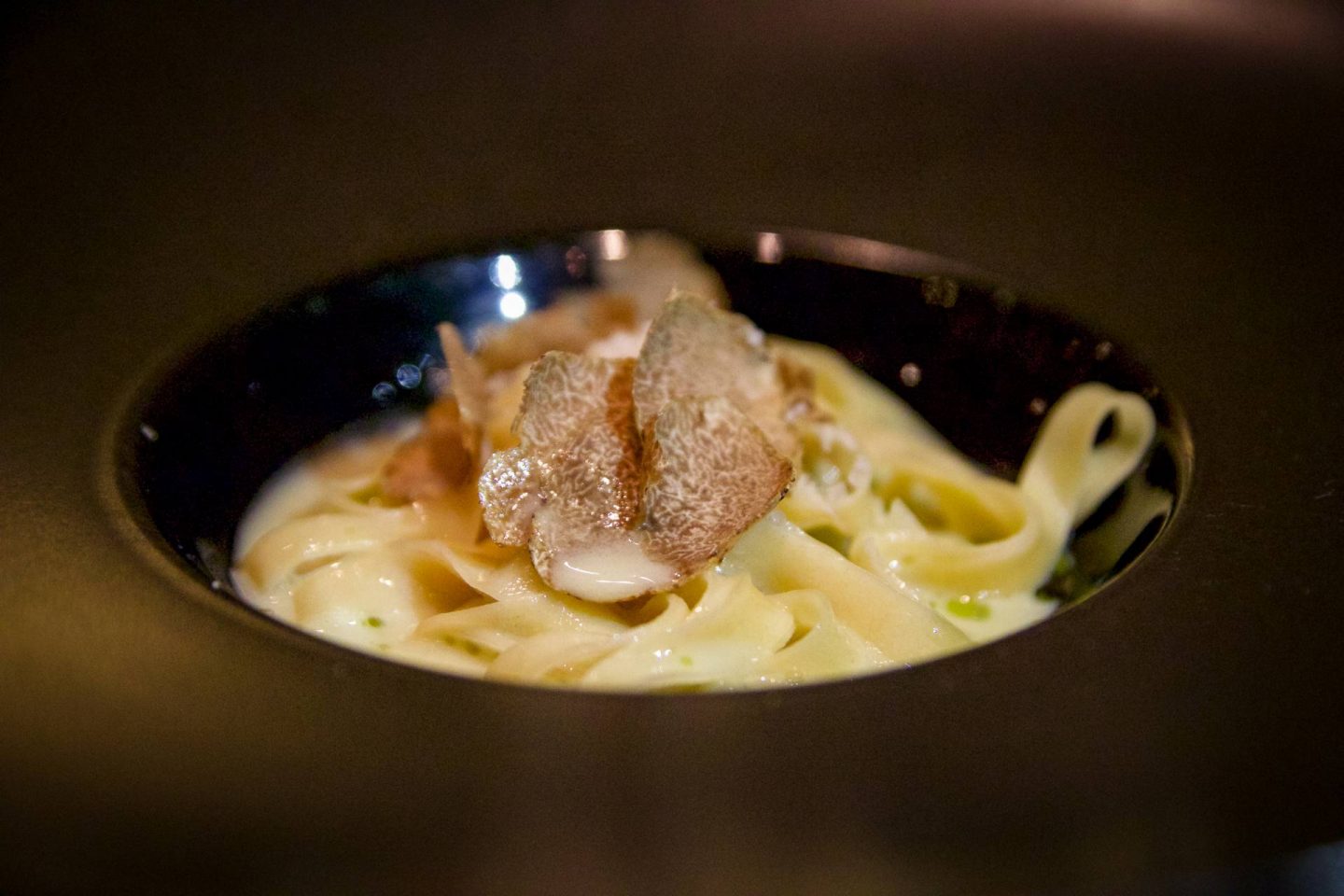 My second course was one I was least looking forward to as I can often be put off of foods by the strong smell of truffle, so I was rather happy when the tagliatelle, white truffle and 36 months aged parmesan arrived in front me, free of smell and looking delicious! It also tasted incredible and it was the course that surprised me the most! 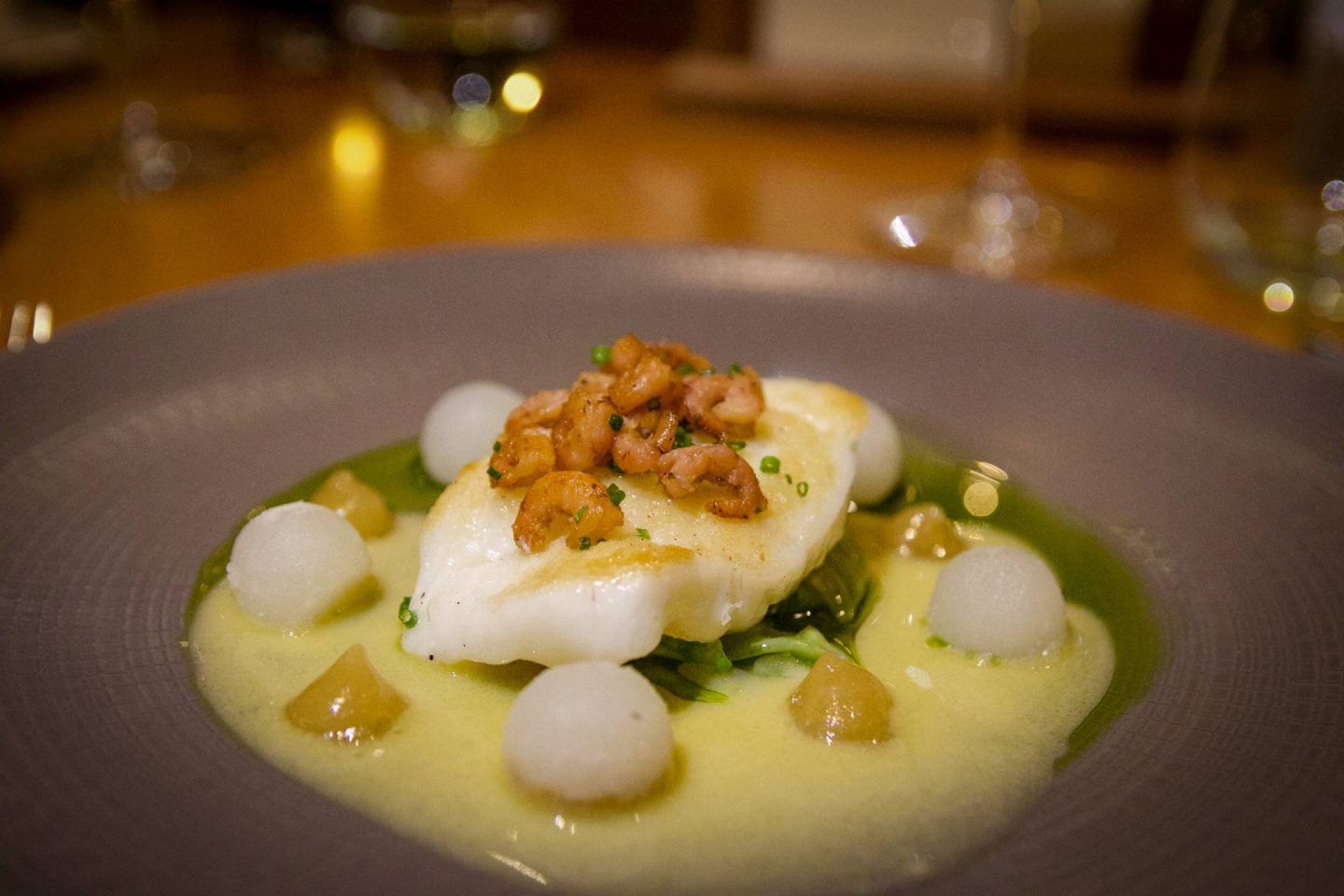 The last of my fish courses was the Brill, leek, black garlic, and nasturtium served with mussel cream. I love trying fish that I haven’t had before as it means I’m broadening my horizons in the fanciest of ways! I’d order this as a main meal for sure! 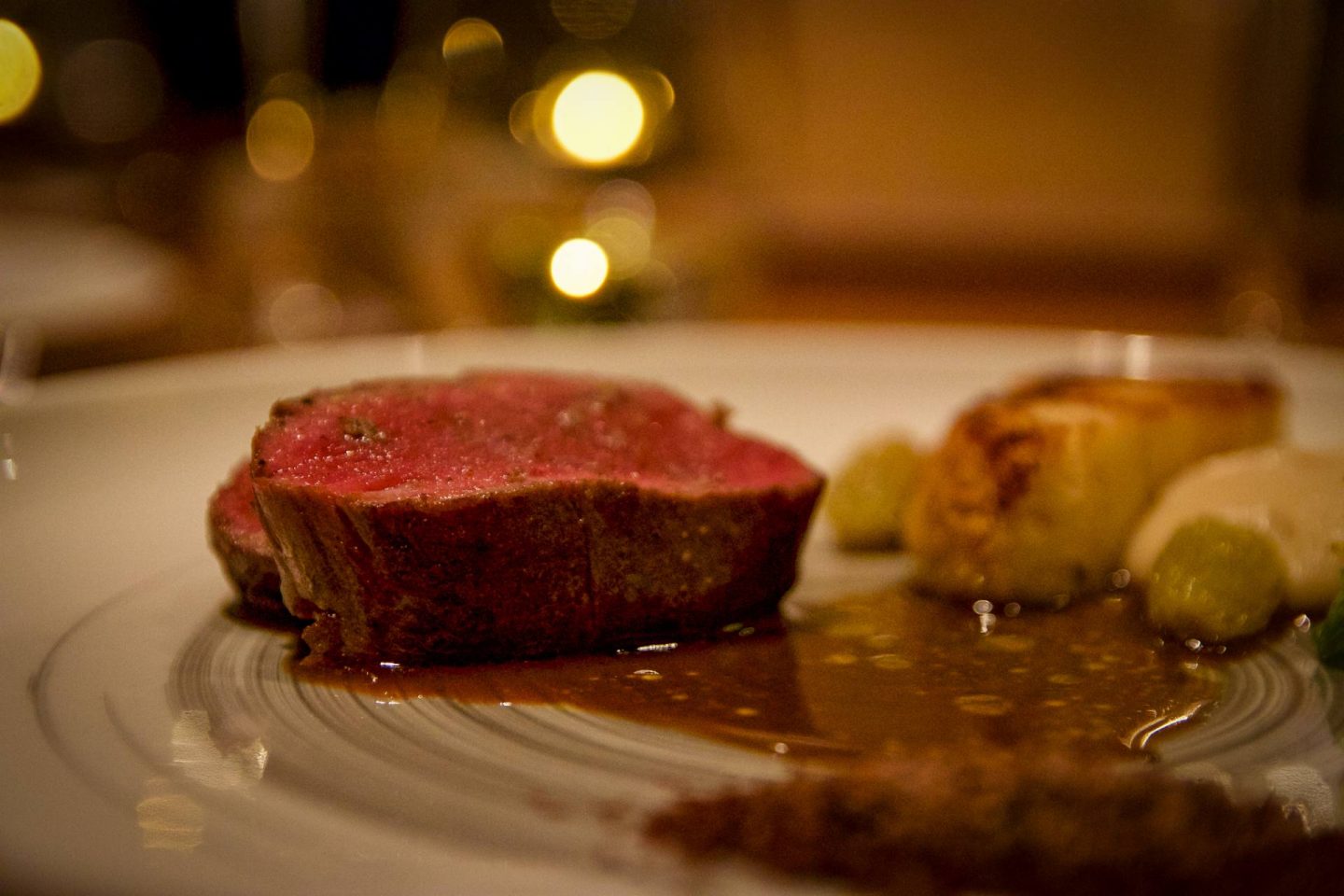 I think this could have been my favourite dish of the evening and it consisted of Fallow Deer, Jerusalem artichoke, kale, elderberries, and bitter chocolate. The deer was so tender that I didn’t really need to use a knife and all of the other flavours complimented it so well without overpowering. 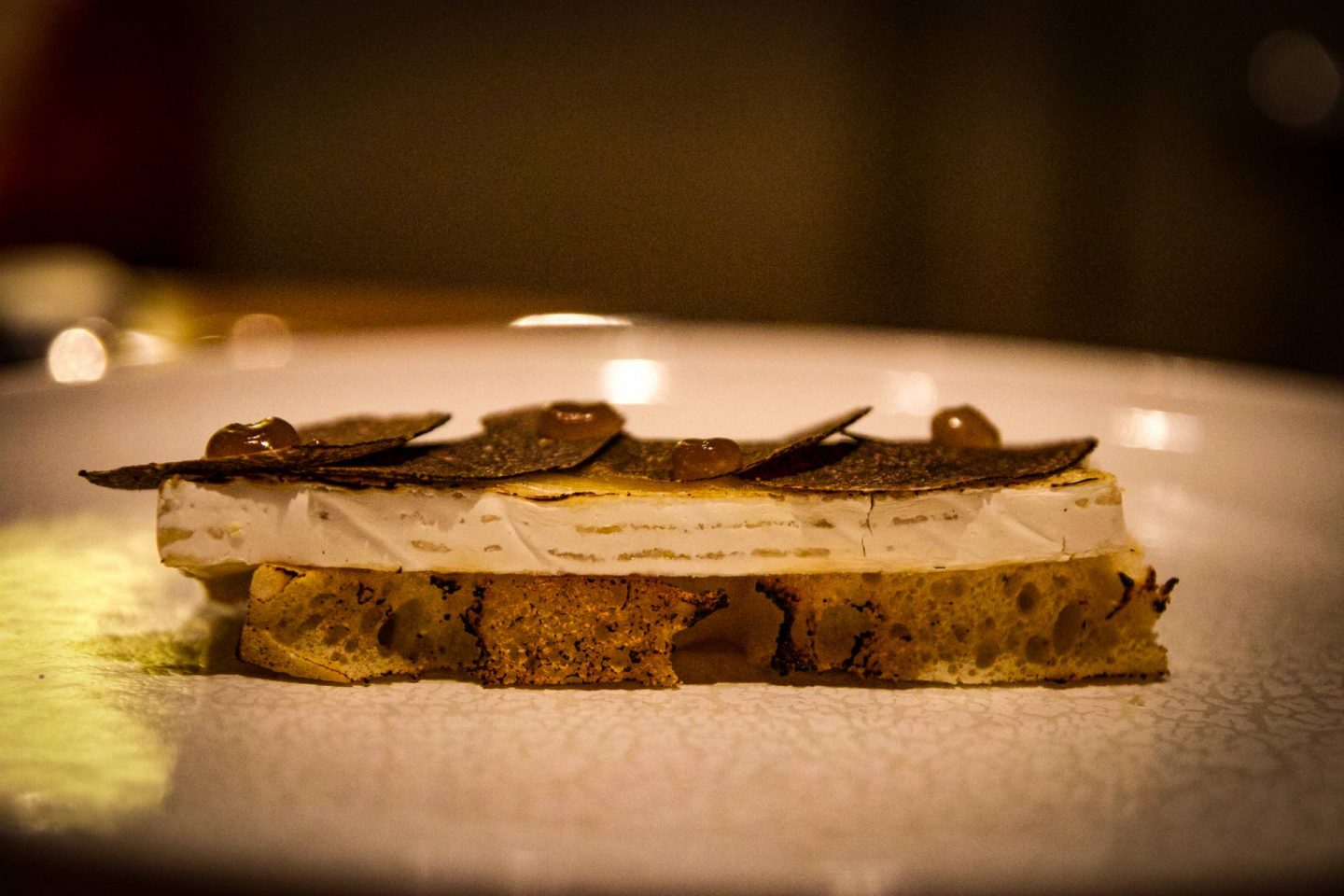 Obviously, with this being another truffle based dish I was a little worried it’d be too much and I wouldn’t be able to smell or taste the Bath Soft Cheese that is was paired with, but again, it was perfectly portioned and all went so well together. 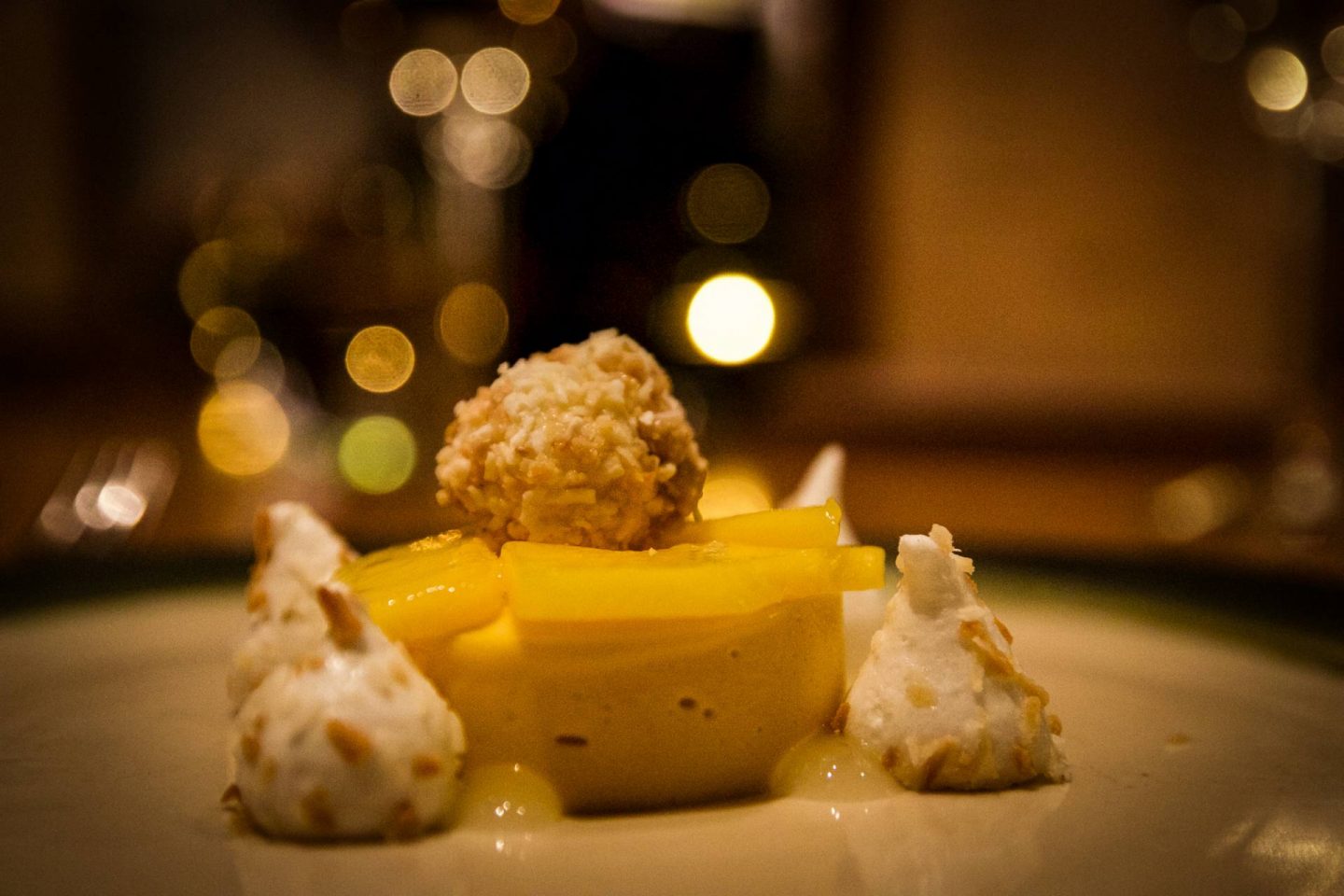 On the ‘Seven’ tasting menu I got spoilt with not only a cheese dish, but with two actual desserts as well; the first one being mango with yuzu and coconut. These flavours transported me to sunnier climes as they were so tropical and refreshing! 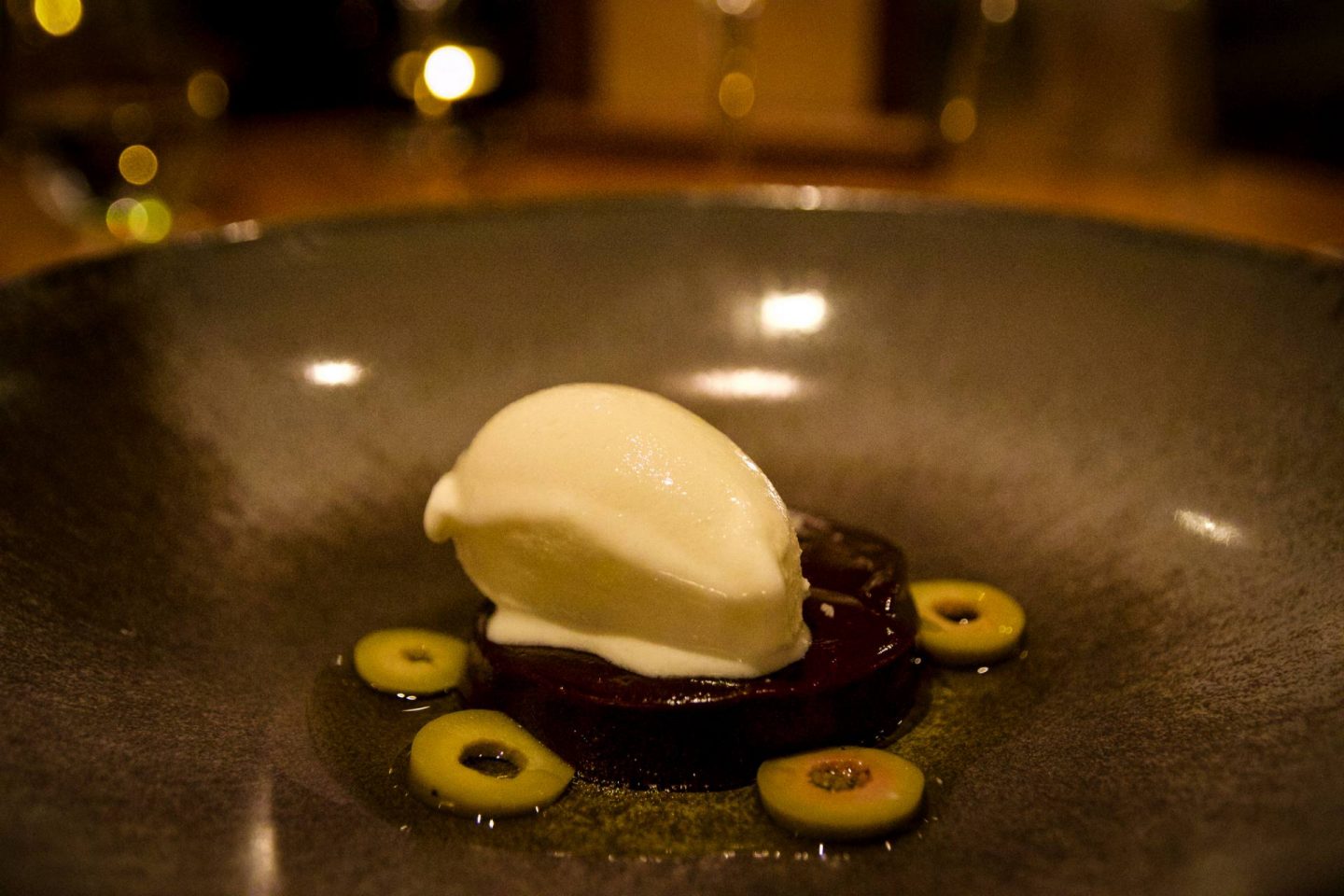 The last of my seven divine courses has to be the most peculiar of them all being made up from a dark chocolate mousse topped with yoghurt sorbet with a side of olives and drenched in olive oil. Yes, you read that right, olive oil and dark chocolate, it almost sounds healthy right?! In fact, it was so good I don’t even care about the calories in it! 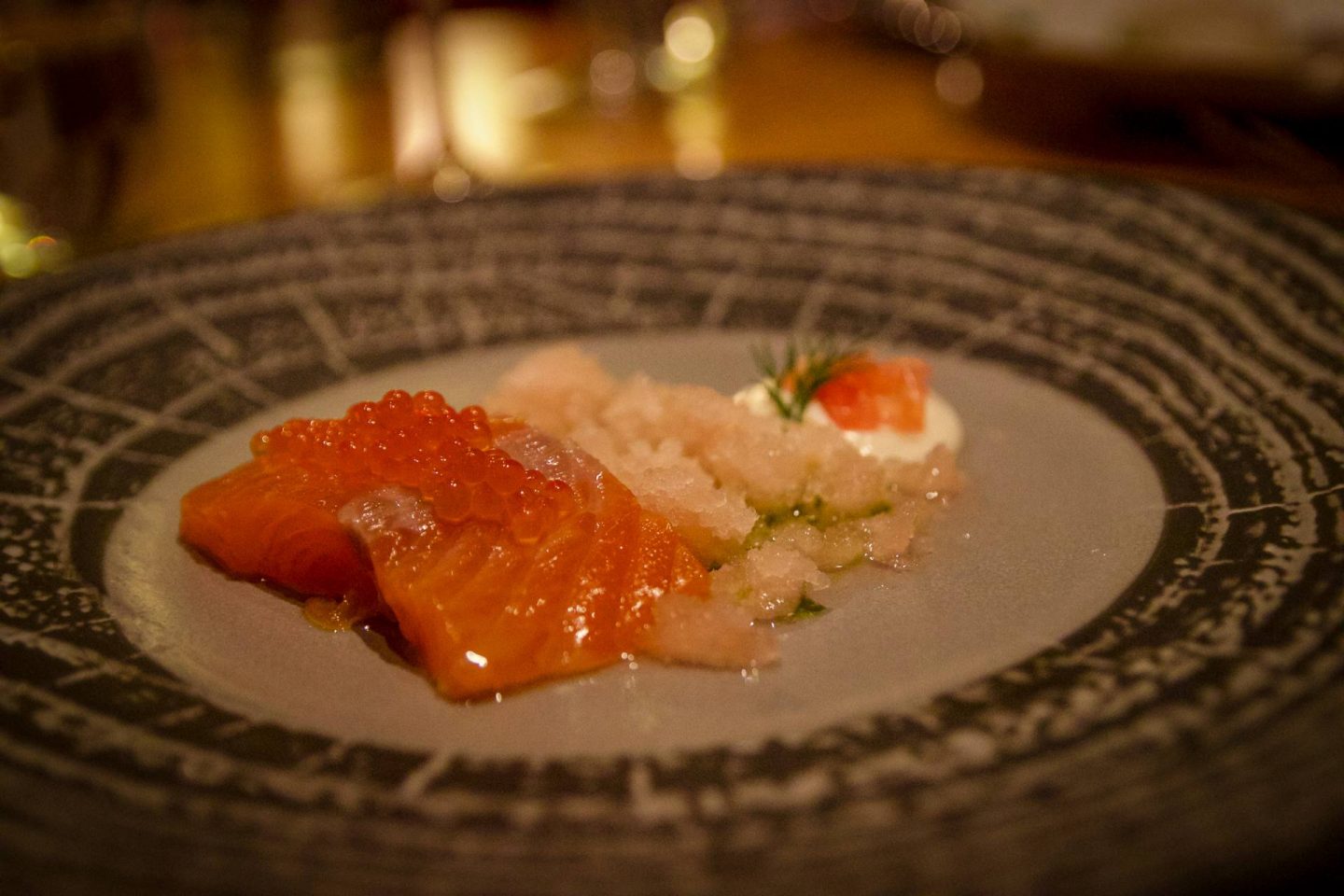 Mike’s first course was the stunningly presented Cured Chalk Stream Trout sided with iced pink grapefruit and horseradish. With so many new flavours to try, he really enjoyed this as his starting course and was actually his favourite overall! 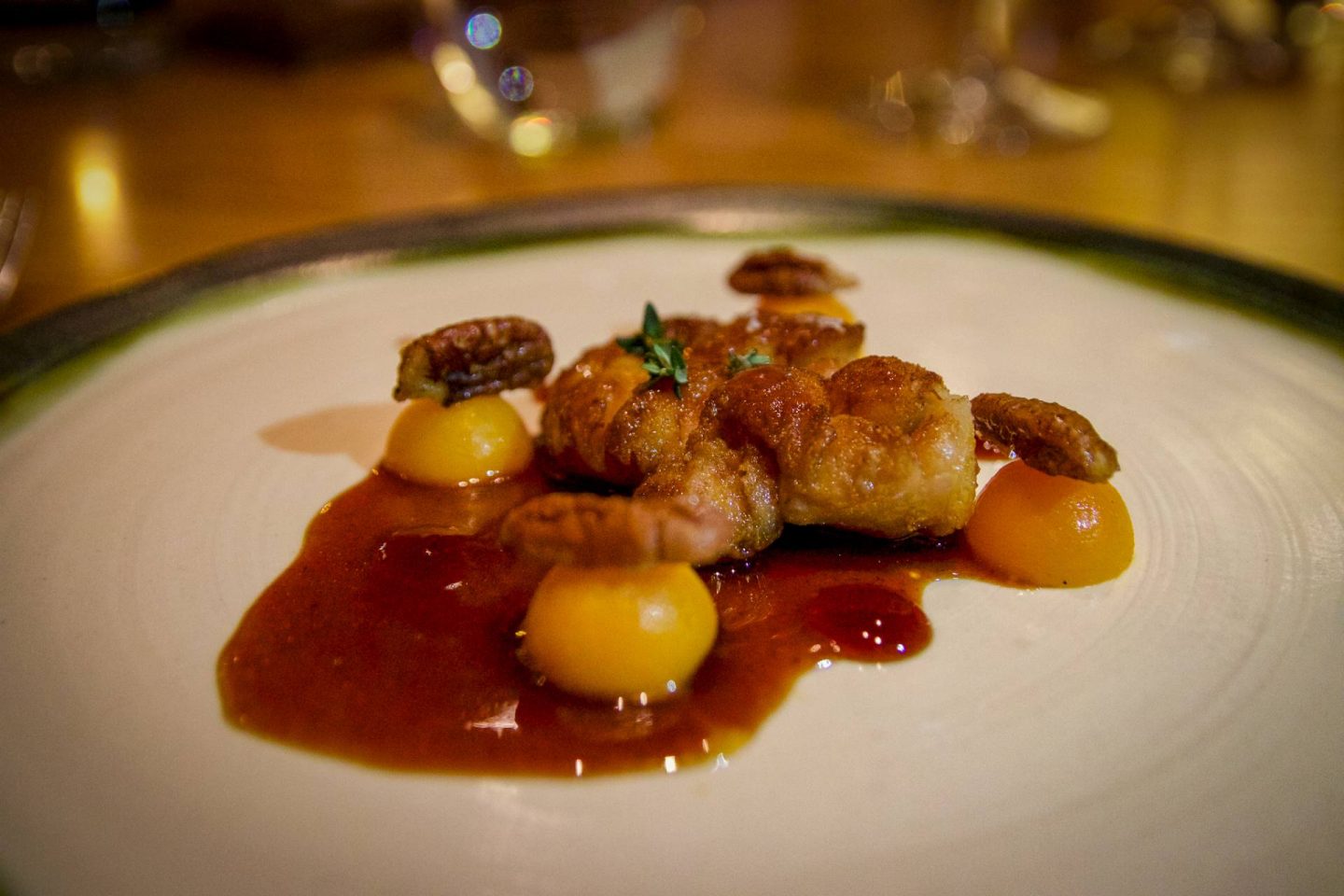 This was my favourite course from the ‘Five’ menu as we obviously had to try each others! This was the Veal Sweet Bread with butternut squash, soy and pecan nuts. All of the flavours just melted in your month and with my love of soy being as much as it is, this was a sure winner for me. 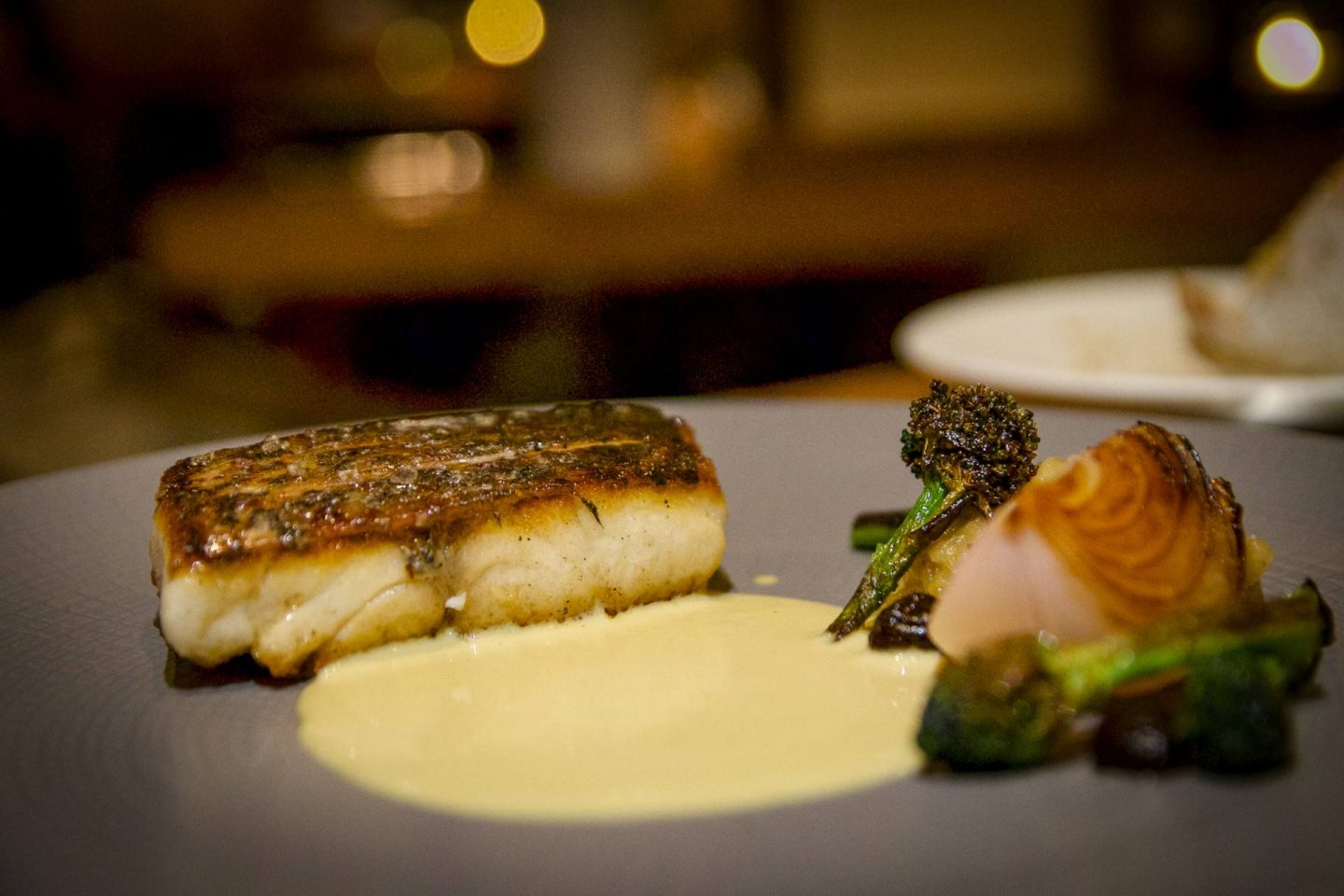 Mike’s final fish course was the Stone Bass served with purple sprouting broccoli, onions and black garlic topped off with a mussel sauce. Again, these were lots of flavours we enjoy but would never have plated together, but they worked so well. 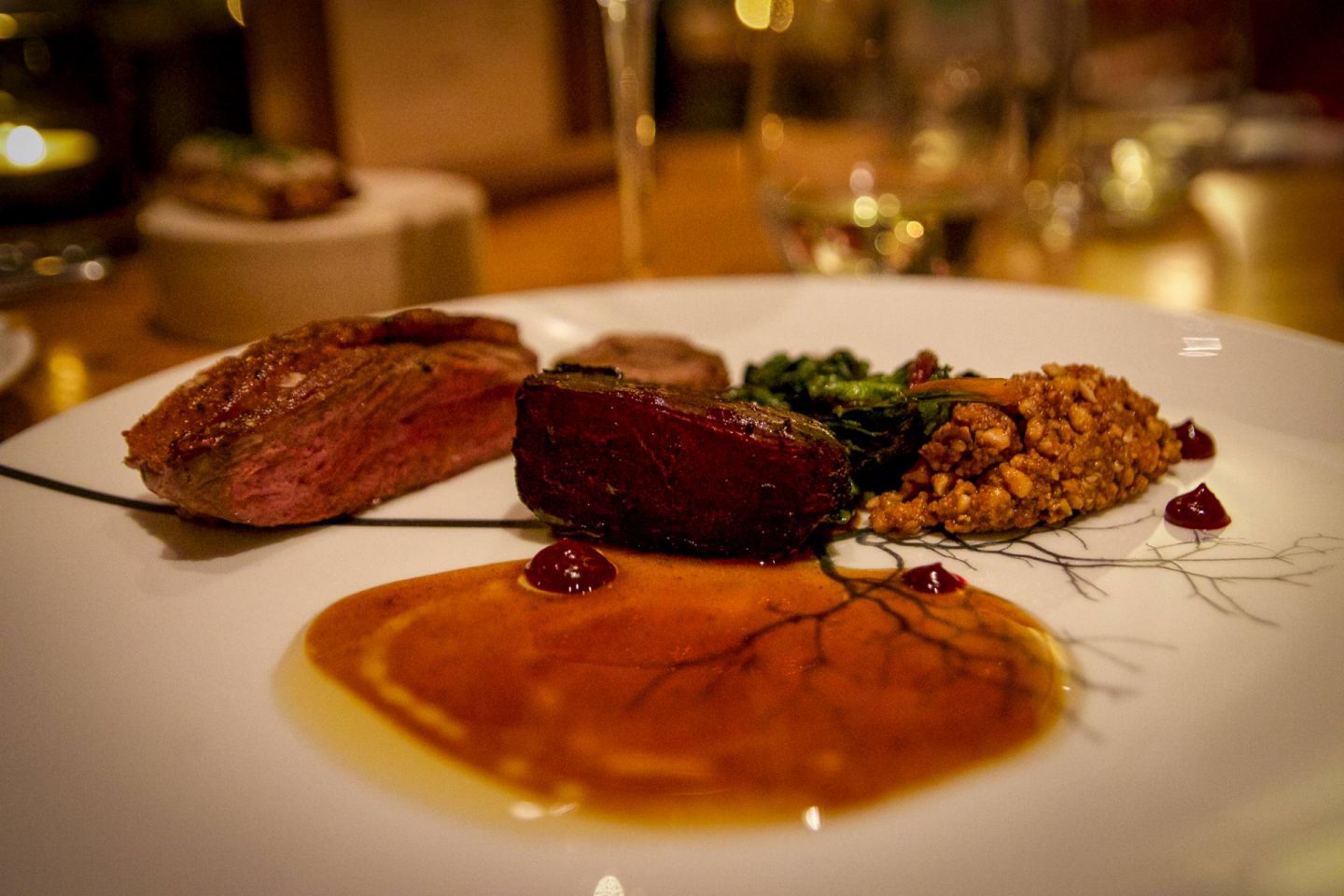 I was actually shocked that this wasn’t Mike’s favourite course as there were so many great elements to it! Woolley Park Farm duck served three ways, bbq beetroot, chard, hazelnut and blackcurrant. There was so much going on with this course but it all fitted together so well;  no matter what style of duck you picked up, it went with the other elements of the plate perfectly. 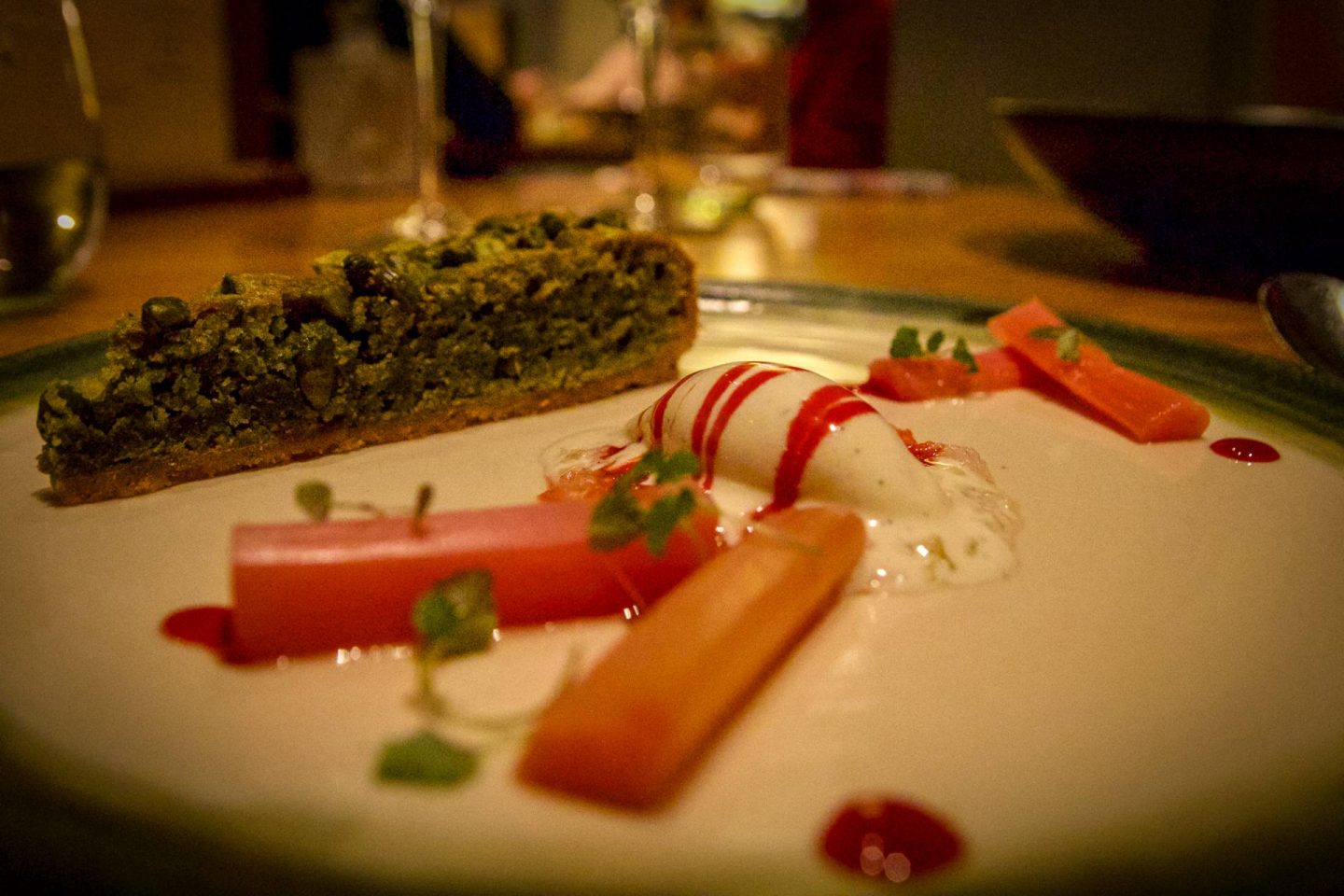 As Mike was on the ‘Five’ menu, he only got on dessert in the shape of Pistachio Frangipane tart served with rhubarb, lemon balm and a scoop of vanilla ice cream.

He enjoyed every single dish, as did I. I would happily make the drive back to Bath to just eat in this restaurant again!

Our service was impeccable; we never poured our own wine or water, we were told every detail about what was on the plate in front of us and we were allowed to eat and drink at out own pace as they tables were only booked for one sitting.

With saying how good the service was after the meal on the phone to my parents, there was a knock on our bedroom door; it was the restaurant manager with our plate of Petit Fours that we had left before receiving as we thought we were all done! 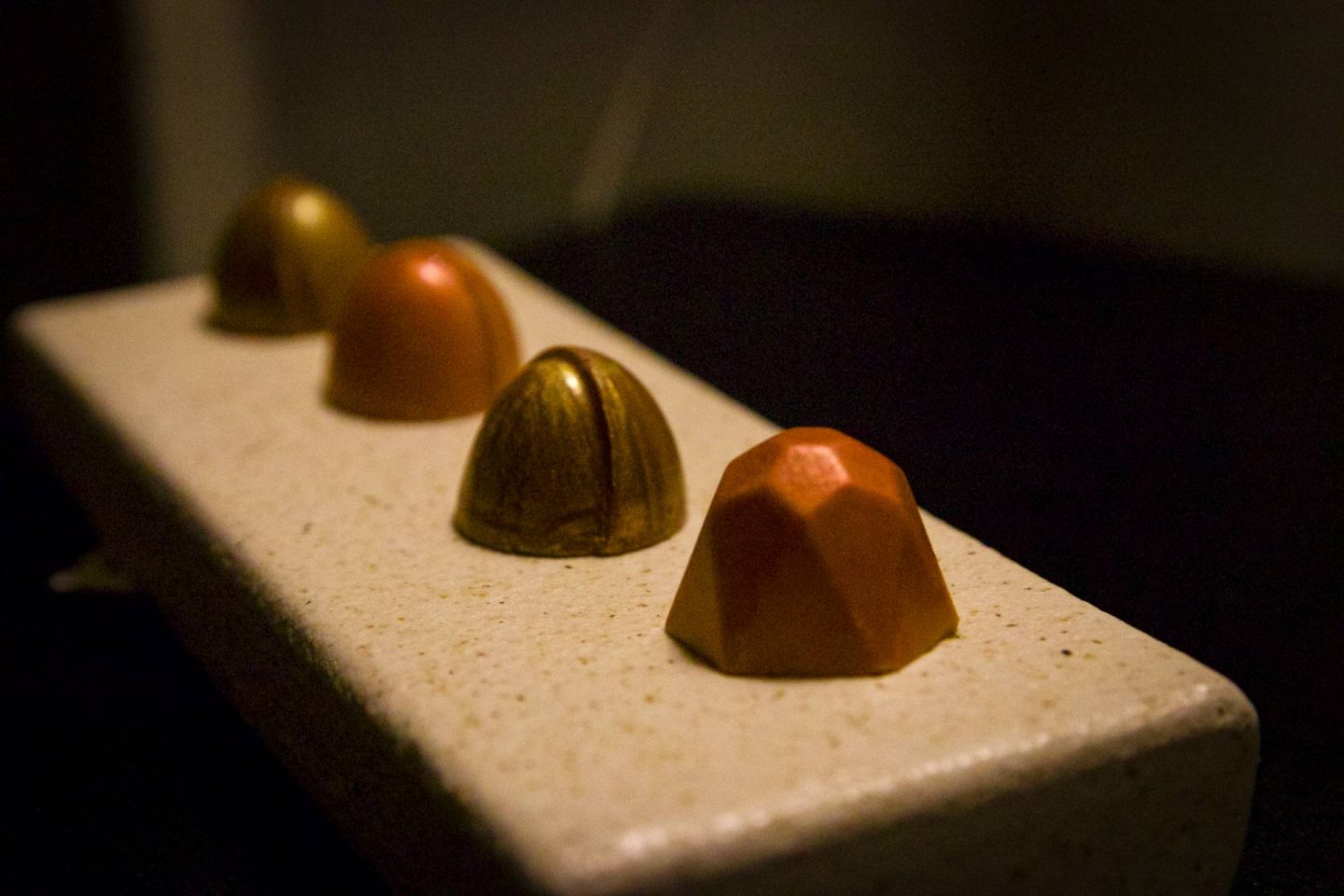 Of course, these were as good as the rest of the meal and quite the sweet treat to have sat on our freshly turned down bed with the telly on before drifting off to sleep.

I can whole heartedly say, that this truly was a special meal with every expectation we had met and and quite firmly booted out of the park! We just wish this was a little closer to home, but I’d happily trip back to Bath to dine there.

One response to “Dining at The Olive Tree at the Queensberry Hotel, Bath”