I was very kindly invited to have the dinner and wine pairing menu on Bustronome in return for a review through Love Pop Ups London.  However, as always, all opinions are entirely my own.

You all know I’m 100% down for anything quirky in London and I’ve found another awesome way to spend an evening; Bustronome. There are plenty of options on board from lunch, afternoon tea and dinner with various wine pairing menus whilst you take in the sights of London from the glass top bus. 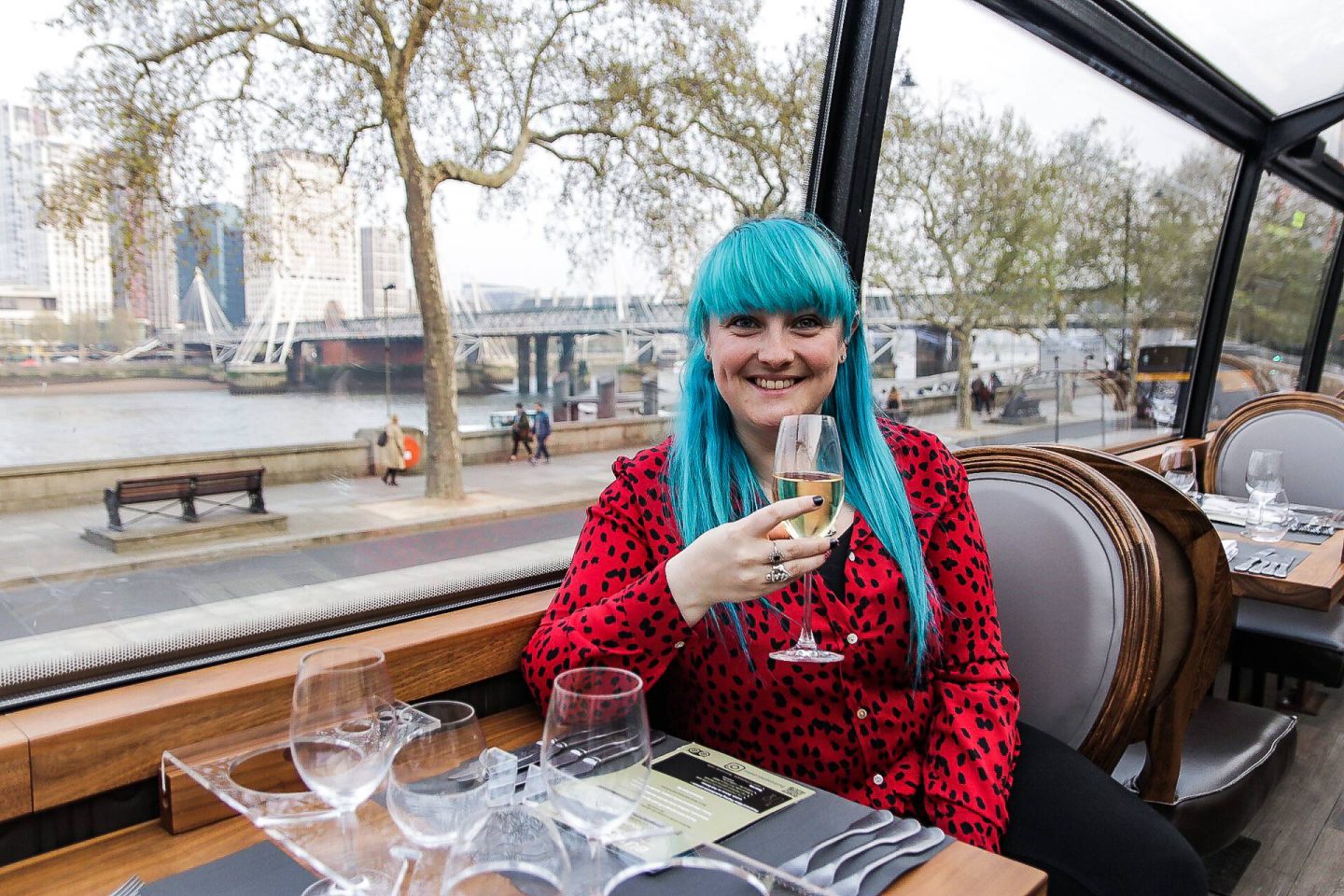 The menu they serve is ever changing as they invite a variety of great chefs to develop inspiring seasonal menus making the Bustronome culinary world unique. These menus offer 4 tasting dishes for lunch or 6 dishes for dinner. 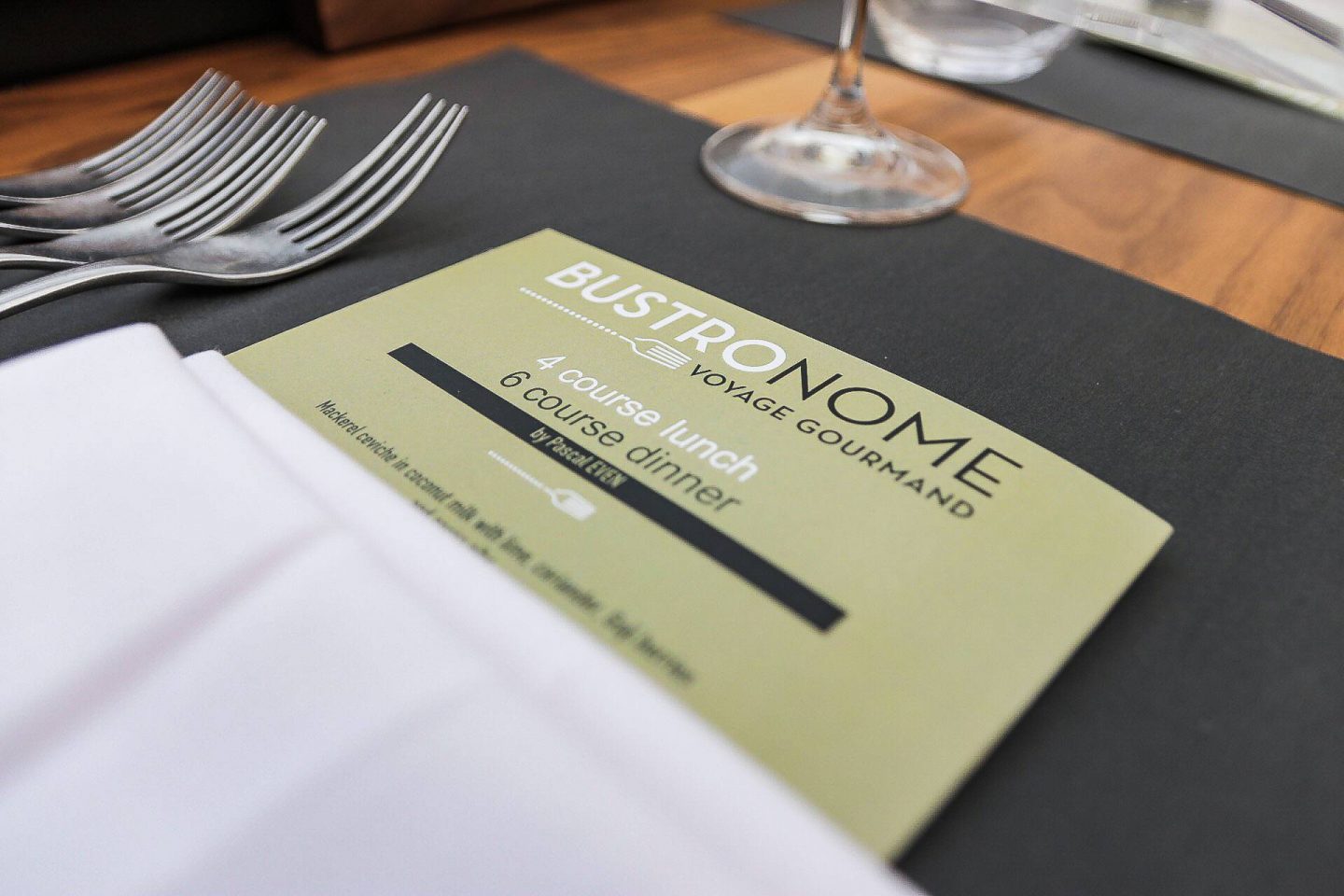 We were lucky enough to be seated at the front of the bus which made for a great view of all of the incredible sites we drove past on out tour that lasted just under three hours. 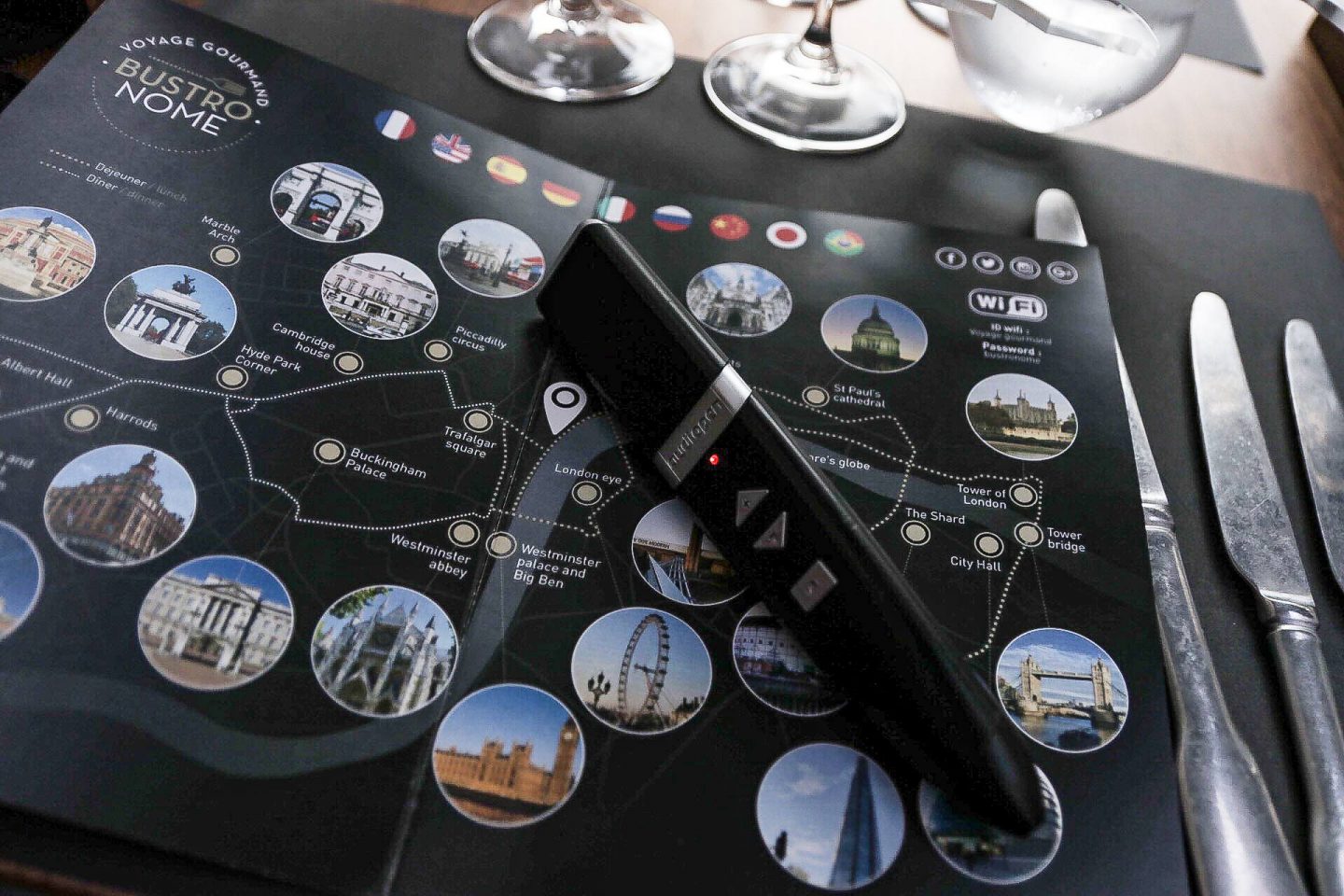 On your table, you get an audiopen along with a map that allows you to scan the location that the bus is driving by to get a full audio description. This was really handy as there were times when we wanted to listen as there were a few places on the map we hadn’t heard of but didn’t want to listen all the time when we were chatting and eating. 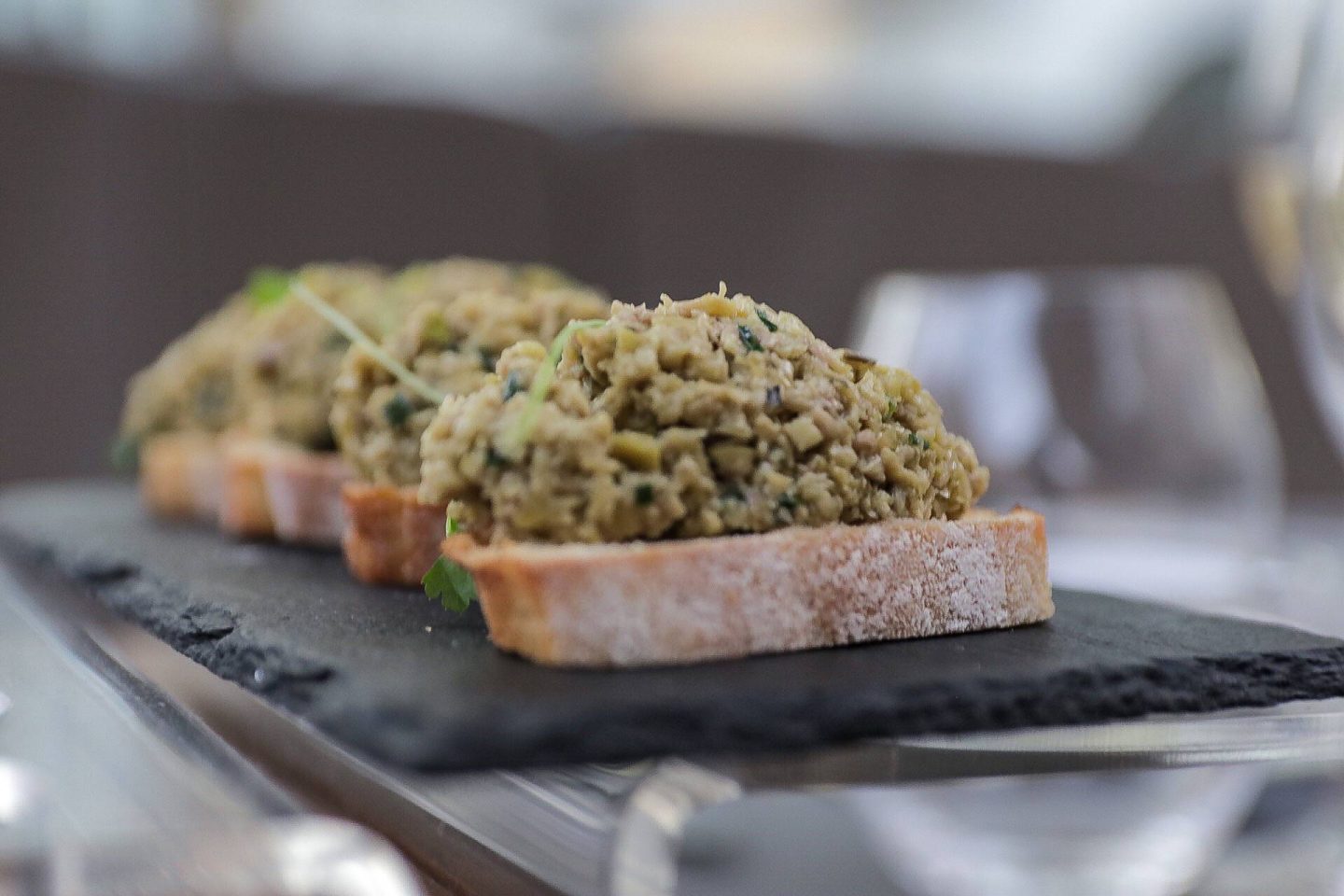 Our opening plate was an olive style bruschetta that was filled with flavour and a pleasant way to kick off our meal. They went down a right treat as were excitedly snapping away as the bus set off. 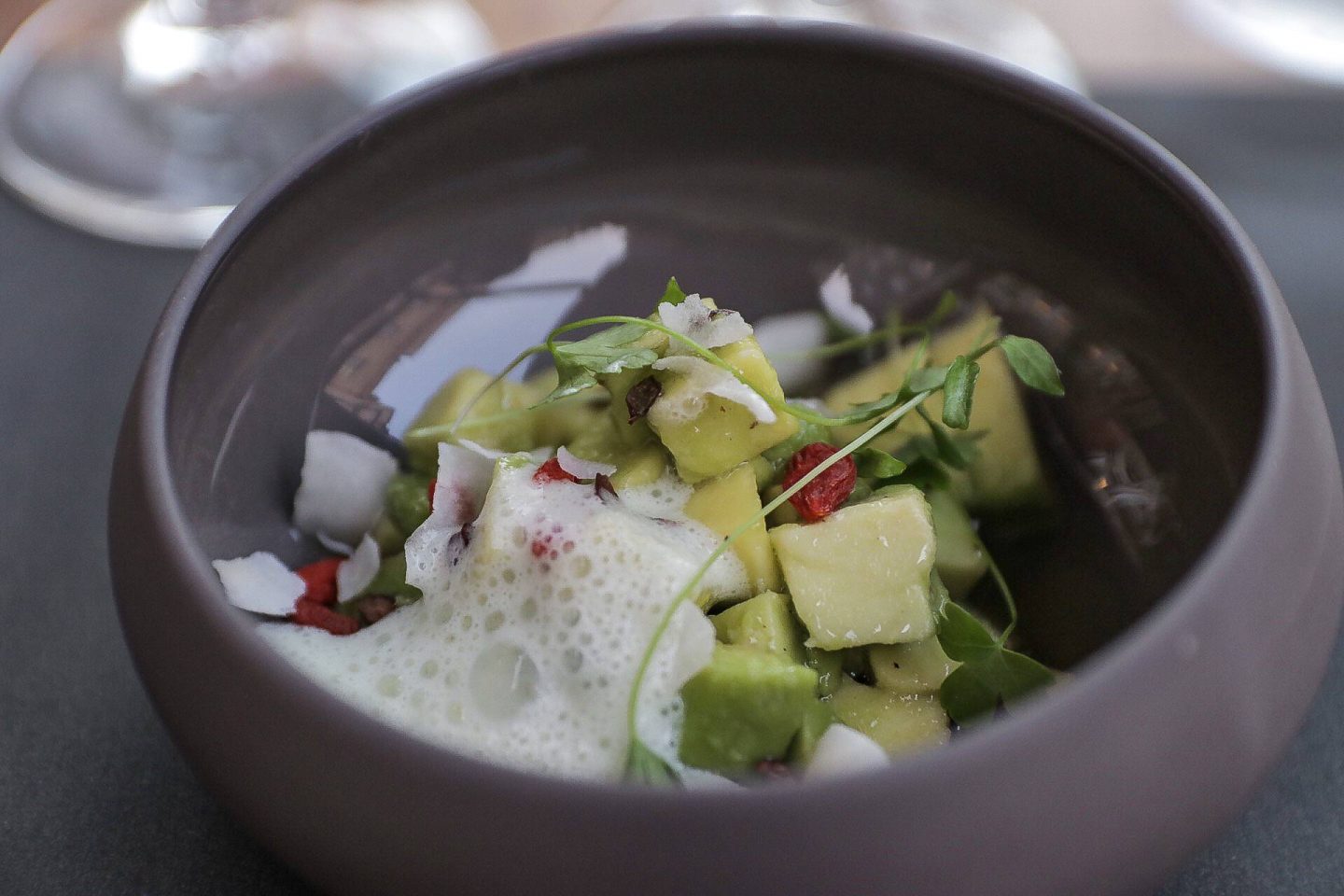 As I had ordered the vegetarian menu my courses were a little different to the others. My first course was an avocado ceviche with coconut milk, lime, coriander, Goji berries and cocoa nibs and the usual menu has mackerel.

This was so refreshing and all of the flavours complimented each other really well. I’m now a big Goji berry fan. 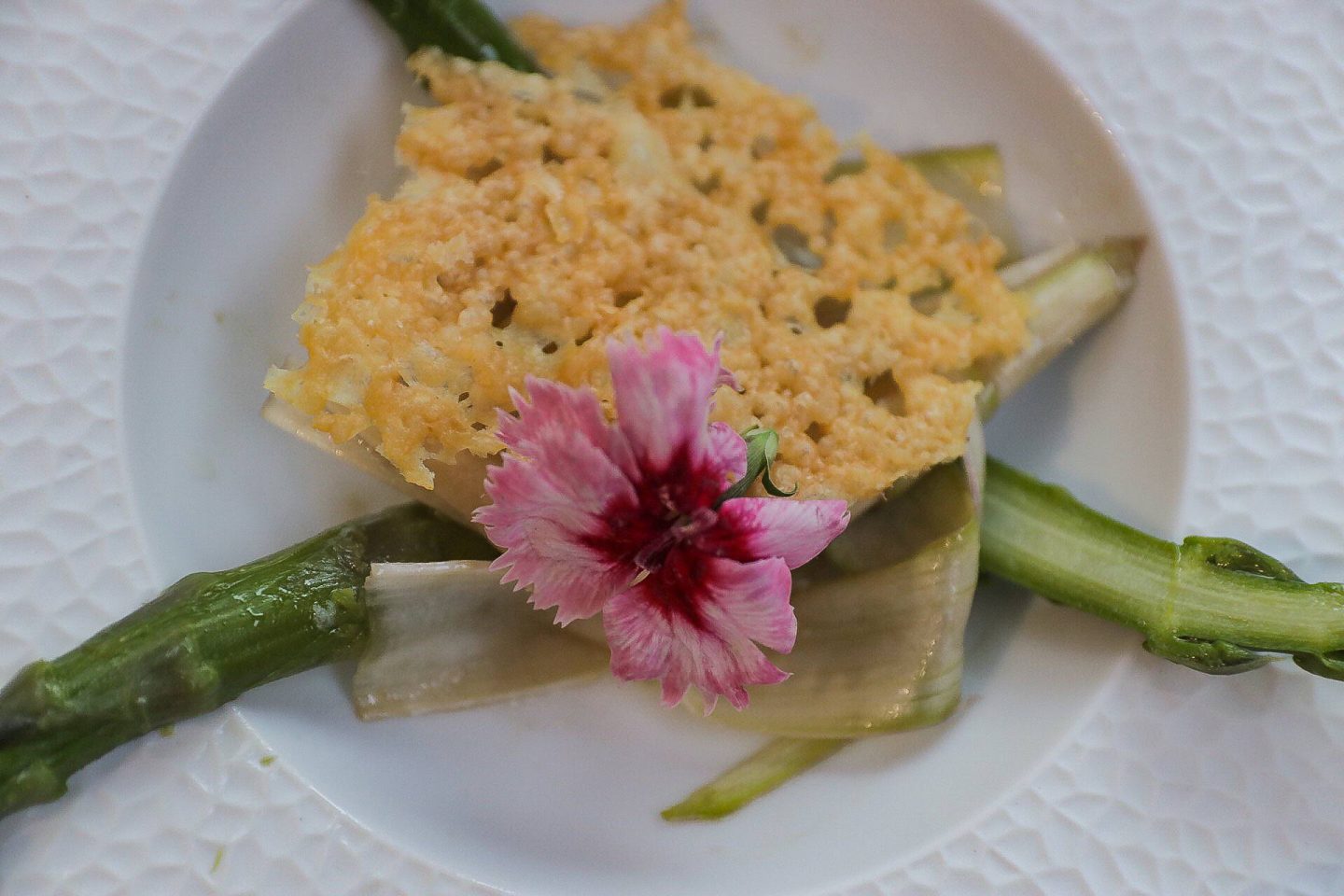 The second course was raw and cooked asparagus salad with poached quails egg and parmesan crisp, although my dish did come without the quail’s egg. I’ve never had raw asparagus before so that was something really interesting to try as I really enjoyed it. The parmesan crisp was just so cheesy too. 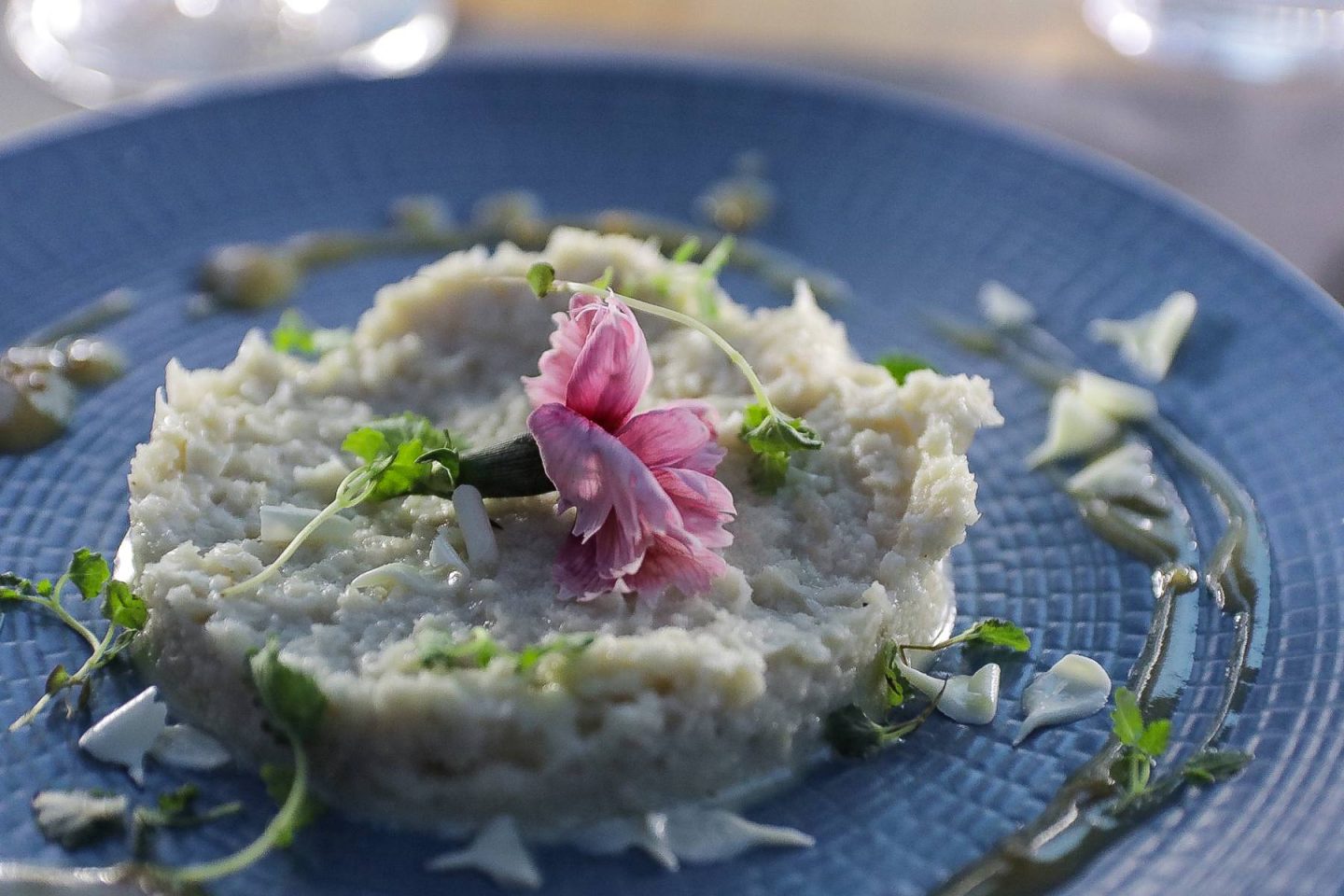 For me, this course was the most disappointing, despite the seed salad, cauliflower risotto served with white chocolate and verjuice being really tasty I feel the veggie option was a little bit of a letdown compared to meat eaters menu. 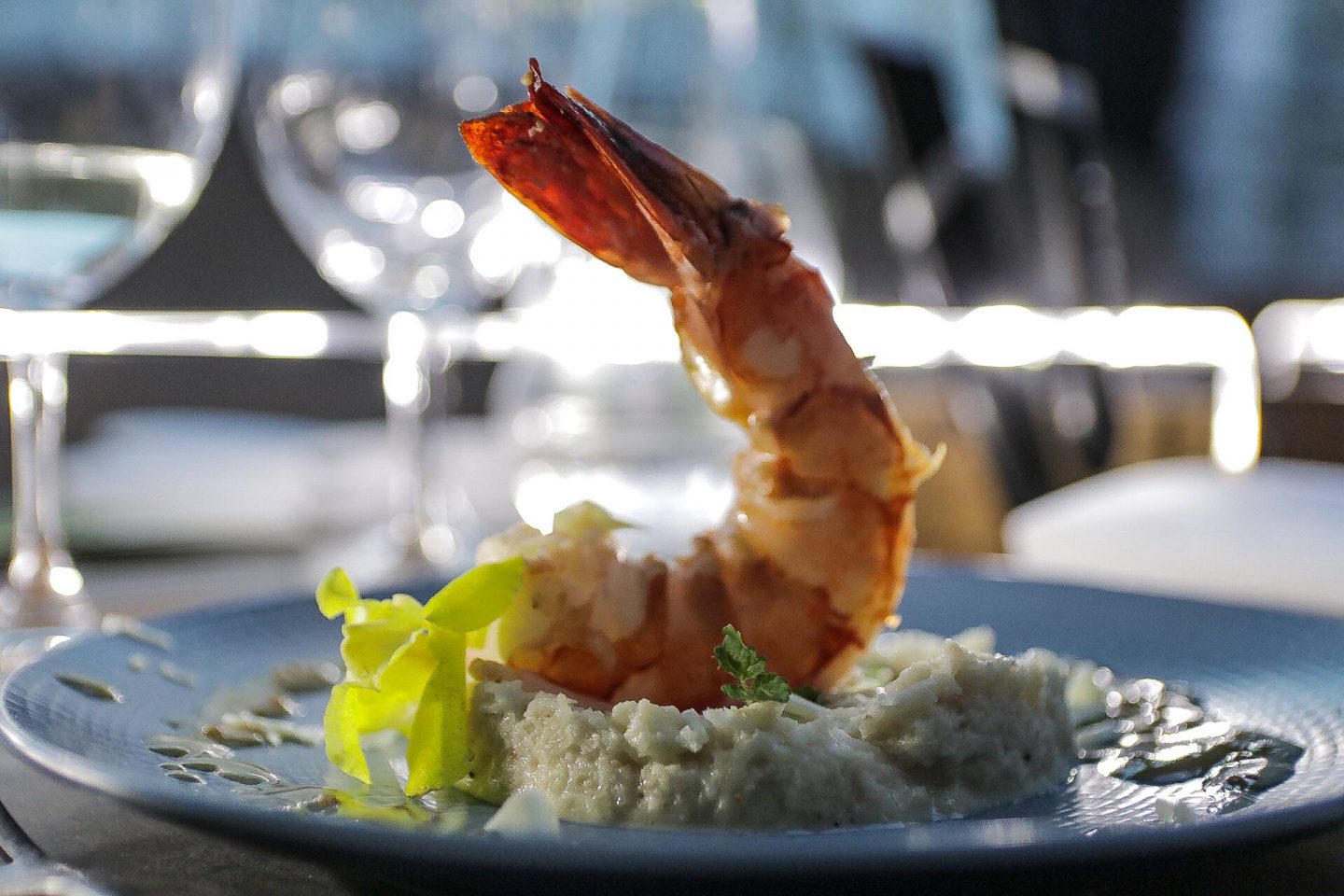 Their dish came complete with a jumbo prawn and I had such food envy. I do think that the veggie option needed something to replace the prawn to give the dish a little more texture and flavour. 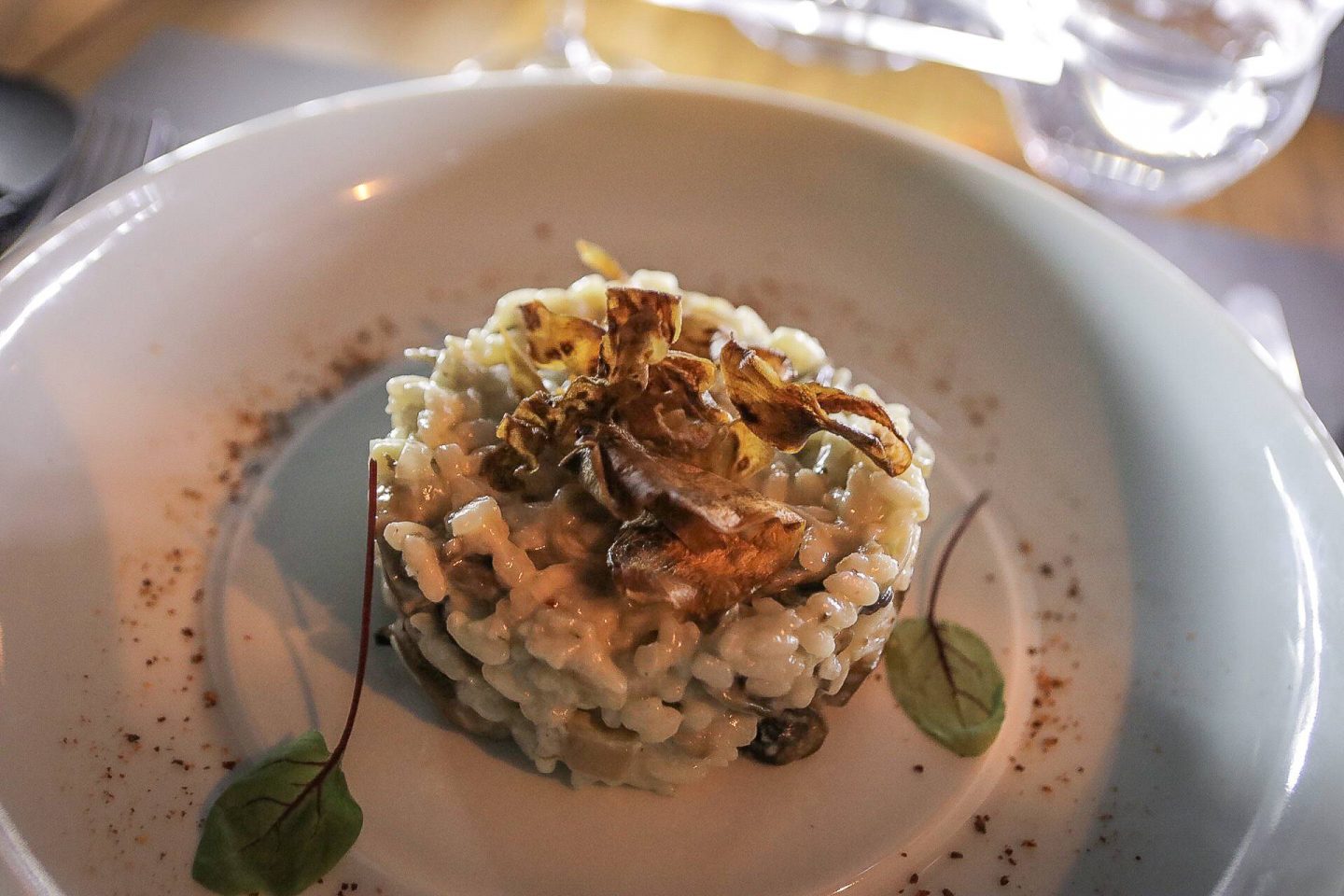 The veggie main course was Mushroom risotto and it was so good. I’ve recently really gotten into mushrooms so I hadn’t had this dish before and it’s something I would 100% order again if I see it on any menus.

The meaty menu’s main course was venison, celery pont neuf and dry cranberry with chocolate sauce which looked incredible and my fellow dinners mopped their plates clean of the sauce. Who knew chocolate and venison could go so well?! 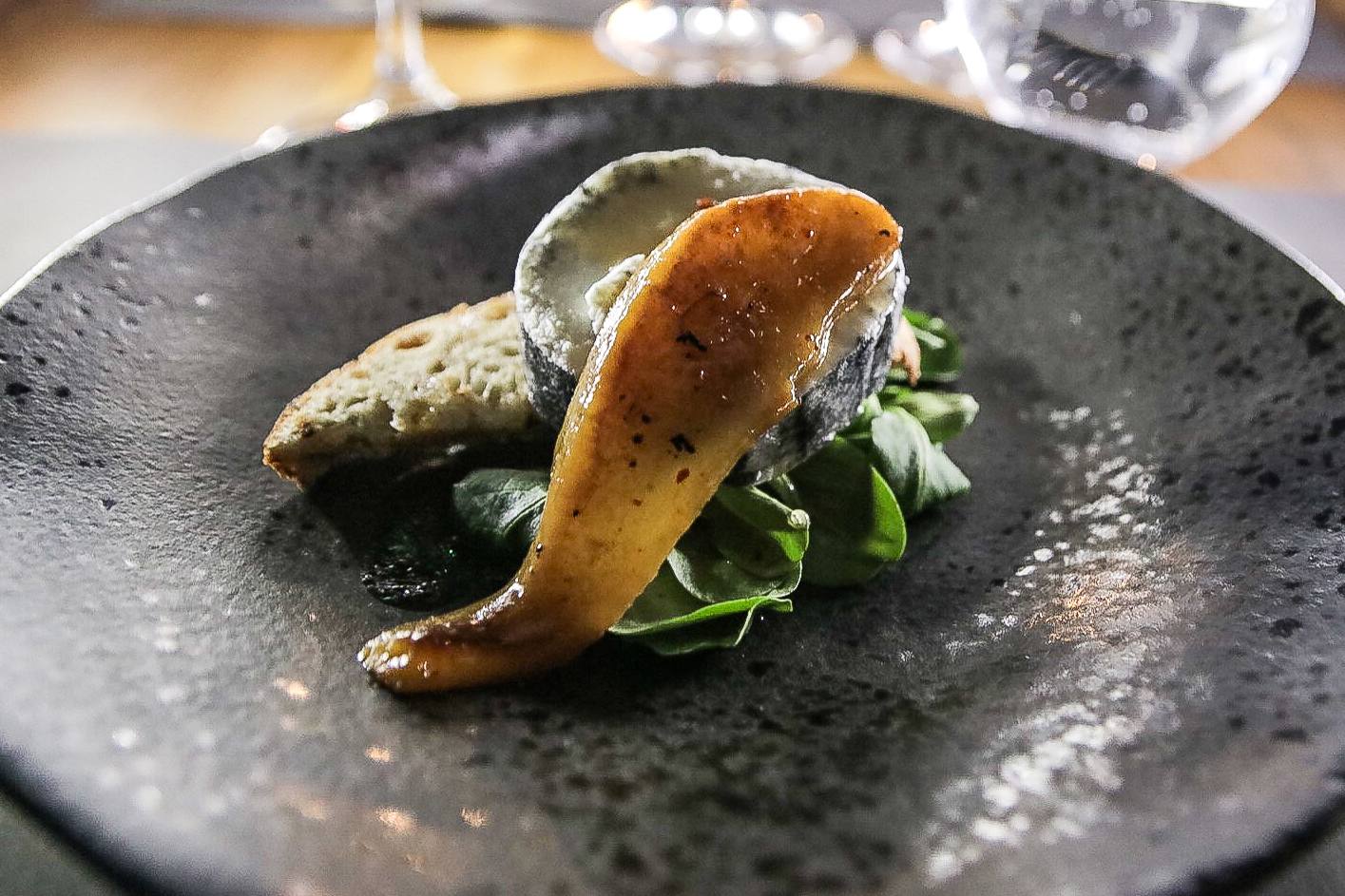 The first of the dessert course was a goat’s cheese dish with honey and pear. This was a flavour and texture sensation; the softness of the pear, the bitterness of the cheese and the sweetness of the honey literally exploded in my mouth with every bite I took. 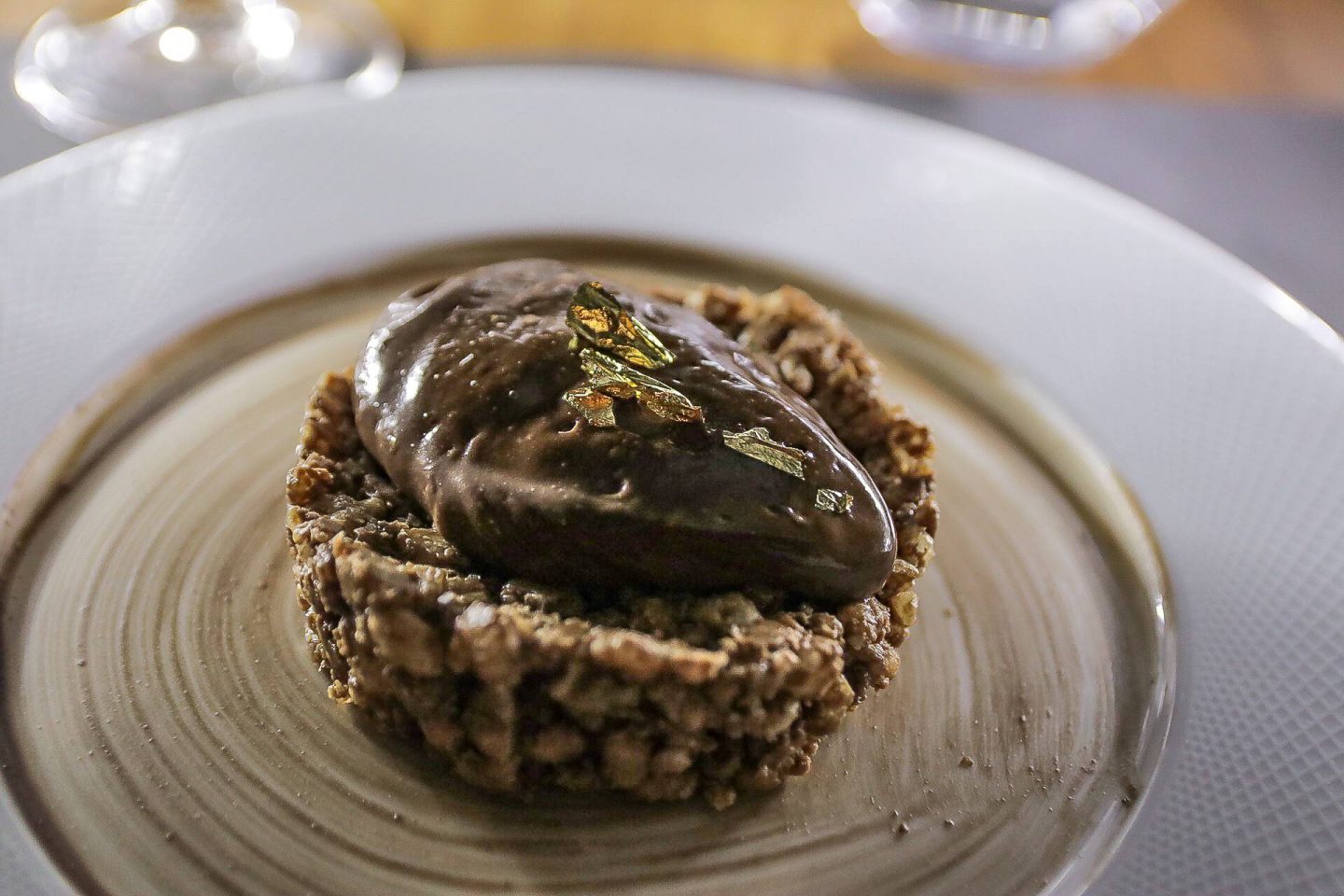 Our final course was the Bustronome Easter Egg which was so good! This actually my favourite course, which is unlike me to pick a dessert to top my list. I would quite like the recipe to be able to attempt to make this at home!

In between each course, we took so many photos of the sights, learnt so many facts about London and had impeccable service.

Overall, I had a really great evening, our wine was kept well topped up, we saw some amazing sights, but I do feel for the money that the veggie menu needs a little something extra to make up for the lack of prawn and the main being a much cheaper dish than the venison.