I was very kindly invited to Eleven98 in return for a review through Love Pop Ups London.  However, as always, all opinions are entirely my own.

We all know I’m dead passionate about where I live, and I love meeting others that are just as passionate as where they are from too. But would you believe it, I’ve found someone that is actually more passionate about it than I am?! Meet Aidan, the owner of Eleven98, a Hackney sourced supper club that is either hosted at Hackney Coffee Co. or if you’re lucky enough, Chef’s Table at his lovely home, obviously in Hackney.

So what is Eleven98?

In short, all the food and even the supplied drink comes from within Hackney.

Aidan sources source their fresh fruits and vegetables from urban agricultural growers based in the borough, there’s not bottled water used, they have overhauled and completely renovated a local growing space and he even forages from the hedgerows, towpaths and marshlands of Hackney as they have proven to provide a bounty of wonderous foods. He also gets all of the meat and fish used within in the menus are sourced exclusively from small, reputable independent purveyors around the borough, and that all other ingredients are from many of Hackney’s organic, wholefood shops. 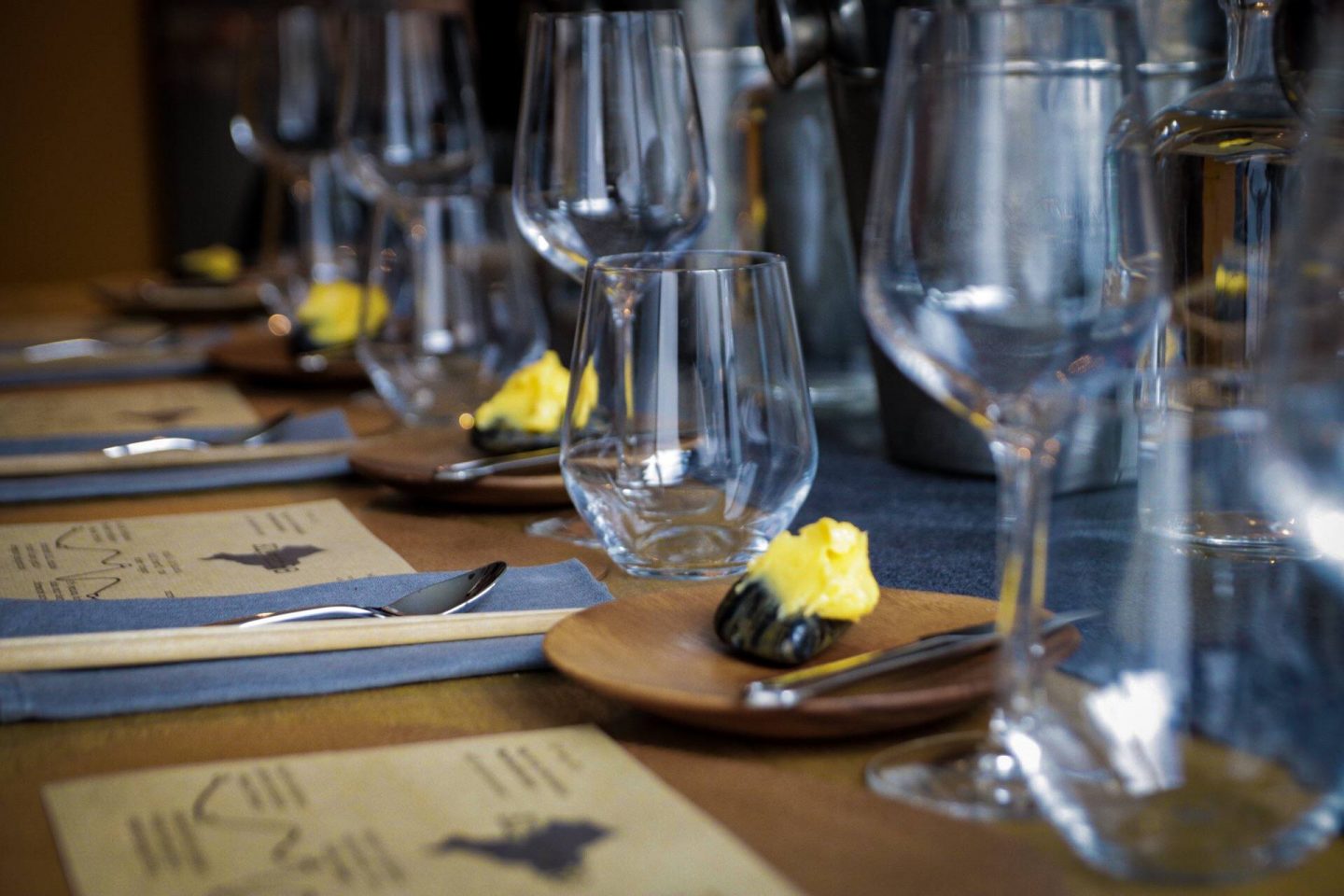 What did we Drink?

With your supper club ticket, you get a welcome cocktail and outs was the “Respect your Elders” made with Our/London vodka, foraged elderflower cordial, and Gala apple. The elderflower was actually foraged from Victoria Park which isn’t somewhere I’d have ever thought of going foraging!

I’m not usually one for elderflower but paired with the Gala apple, I really enjoyed it. The elderflower sherbert was a great touch too. 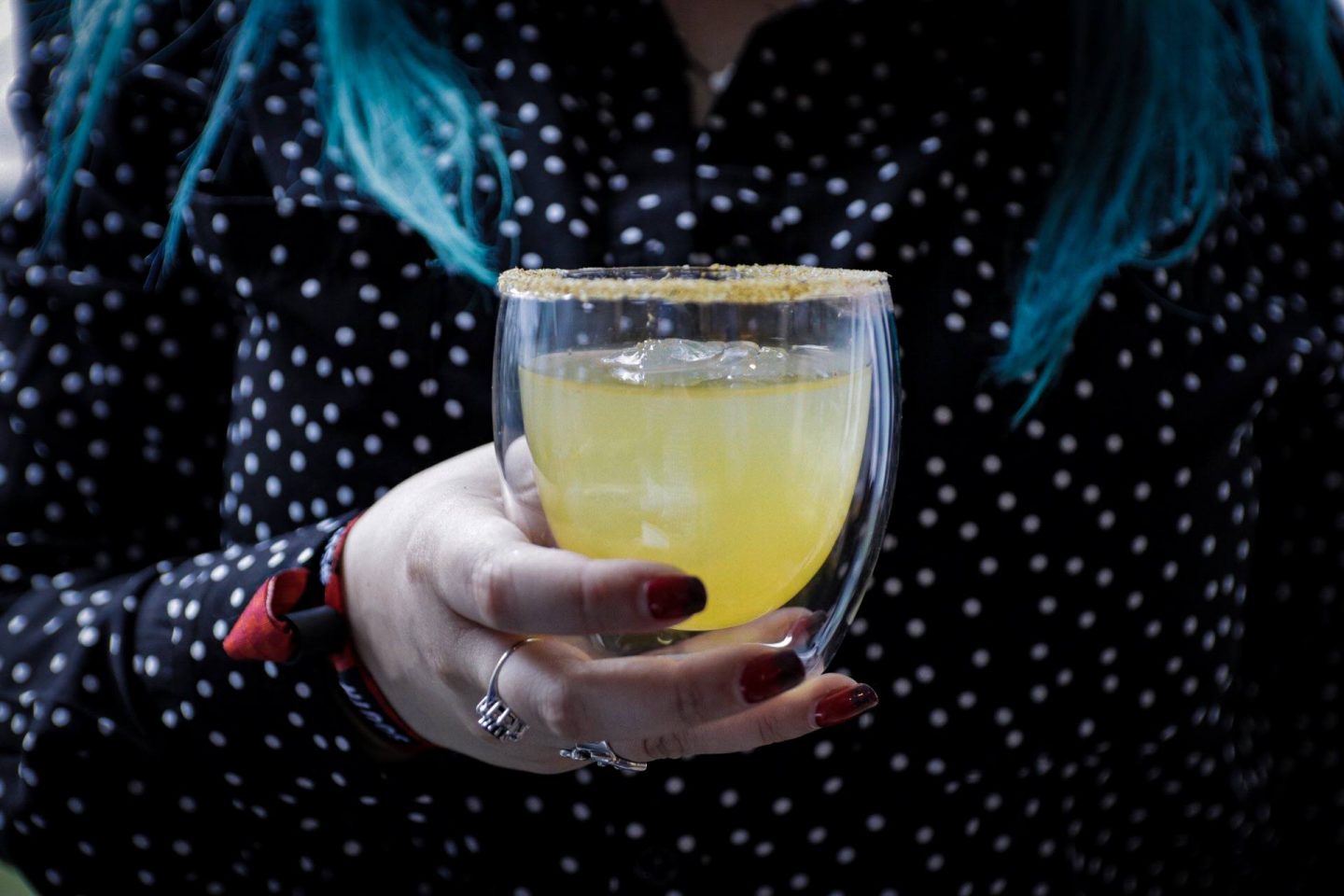 What did we Eat?

The first course we had was a little surprise as it was a brand new addition that wasn’t actually on the menu. It was an incredible melting hake croquette that had been seasoned with celery salt and served with a celery leaf emulsion, pickled celery and a julienne of young celery leaf all from celery grown by Adian in his garden.

Our first official course was chilled Ajoblanco, pickled radishes and fennel fronds. Ajoblanco is a cold soup that’s pretty well known in Granada. The texture added by the pickled radishes was awesome and got me thinking about when my Grandad used to grow them in his garden, it was so good being able to such fresh fruit and veg.

The next course could actually have been my favourite down to the textures, the new flavours I got to try and it wasn’t anything like what I had expected it to be like. It was made up from Stamford Hill rainbow chard, black garlic and oregano pangrattato (breadcrumbs). Black garlic has such a more fulfilling taste than the usual garlic you buy in the supermarket which I didn’t even know existed. 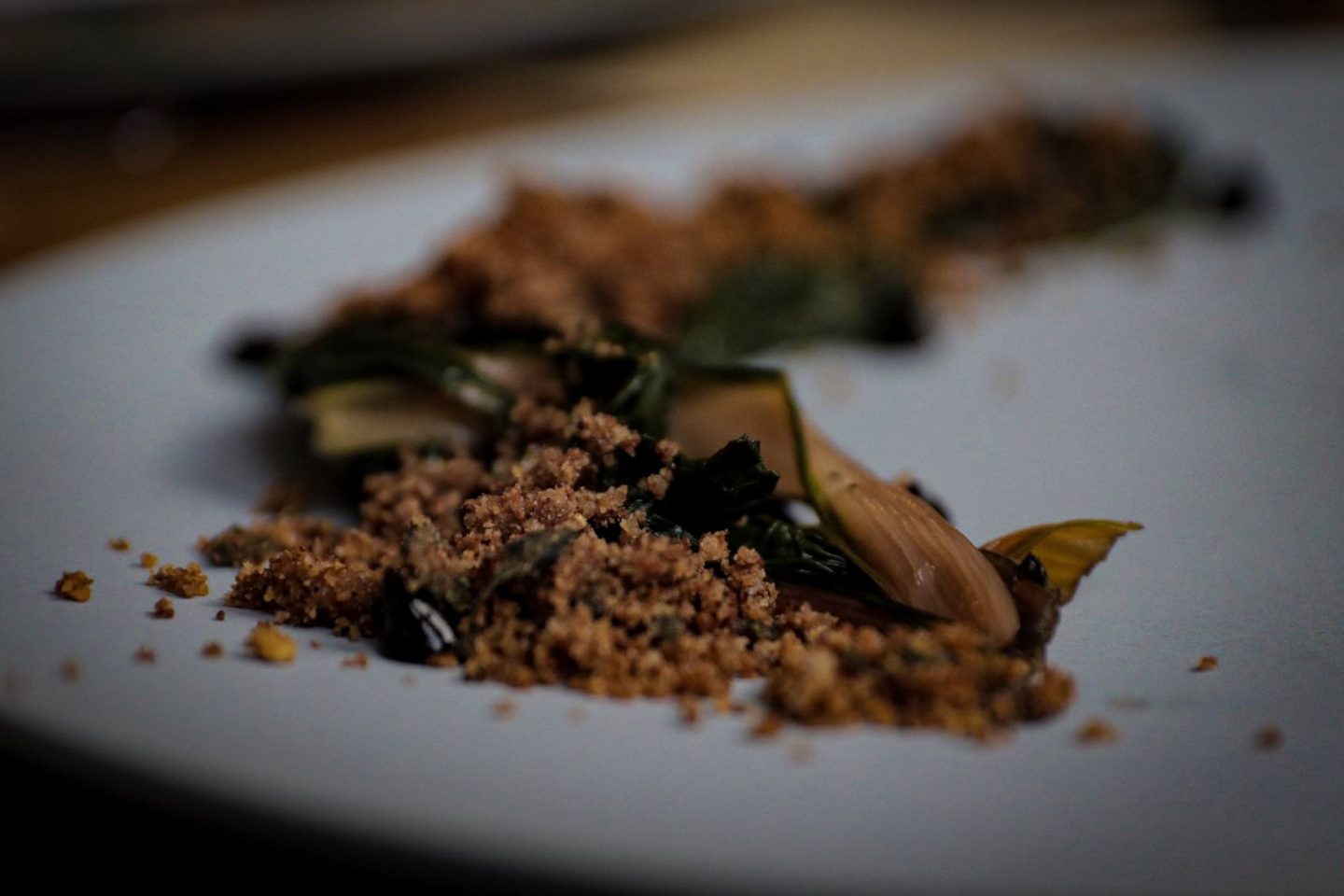 Our only seafood dish of the evening was squid a la plancha, served with wild chervil and raw cider vinegar which was so tasty. I’m not one for eating squid that isn’t wrapped in batter as Calamari so it was quite a big deal for me eating it like this. Mike devoured his quicker that what I did which is rare occurrence so take that as a really good sign!

The big highlight for me, of the night, was the 52°c venison popped into a water bath when we arrived that was served with burnt miso, sour cherry and fermented cardoons. I wasn’t entirely sure how all the bold flavours on the plate would come to together, but my god, did they?! I didn’t want this plate of goodness to come to an end, in fact, I was quite close to licking the plate clean when it did! 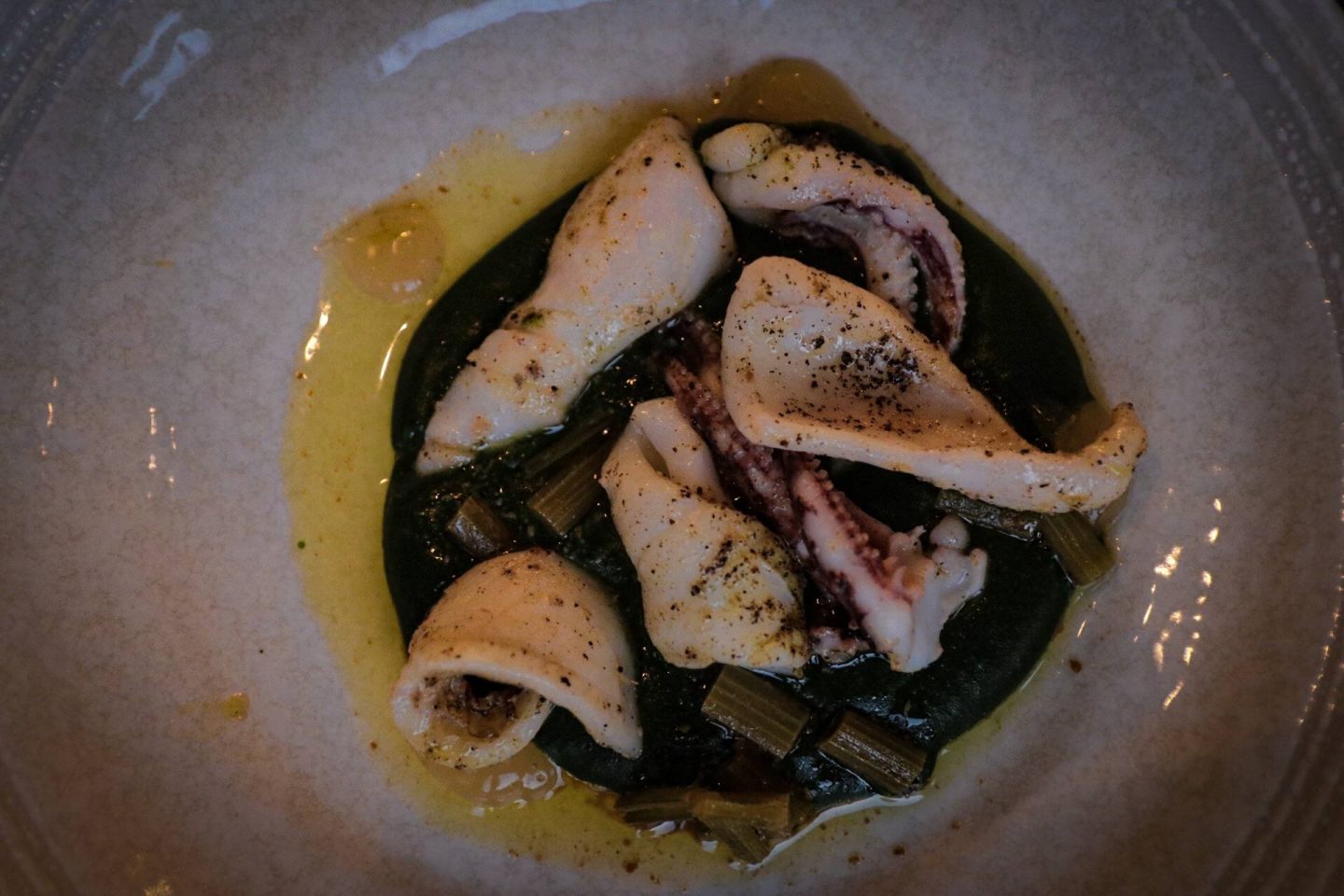 As a sort of palette cleanser, we were served a sorrel (a type of herb) and sour cream mix which was also so very tasty. I was beginning to think that Aidan could do no wrong in the kitchen.

And I was right, the dessert made with Stoke Newington rhubarb from a local growing community, mixed with buttermilk, tonka bean to give a vanilla taste and almond was bloody good too. I’d forgotten how much I love rhubarb as I don’t usually have fruit in desserts in case they are served hot which I don’t like, but the crunch gave this dish so much depth. 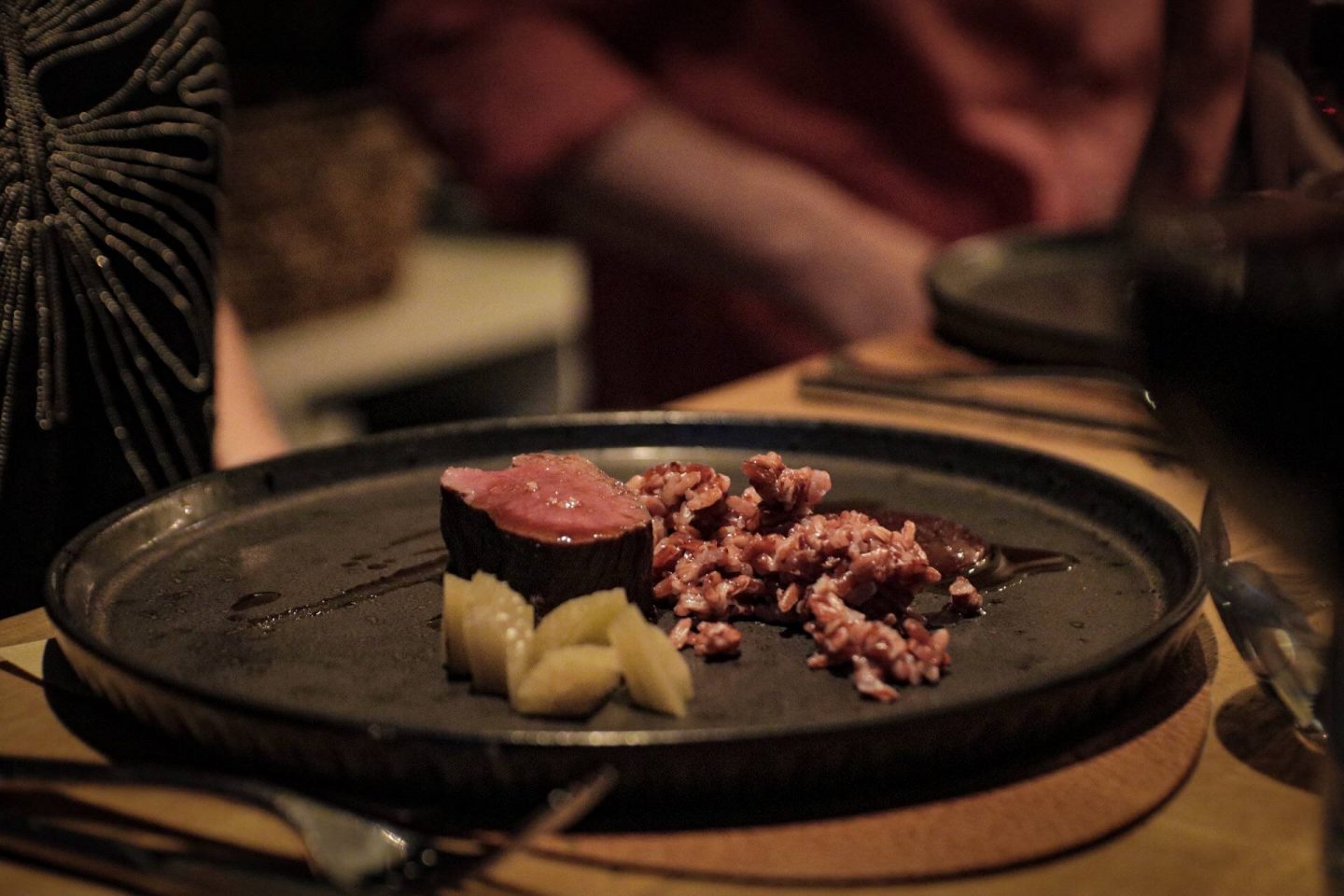 Our meal came to an end with a plate of homemade truffles that were actually filled with truffle; quite a rarity these days. These went down such a treat with the table and we were all sad the night was over.

I couldn’t believe just how much I had come to learn in such a short space of time. 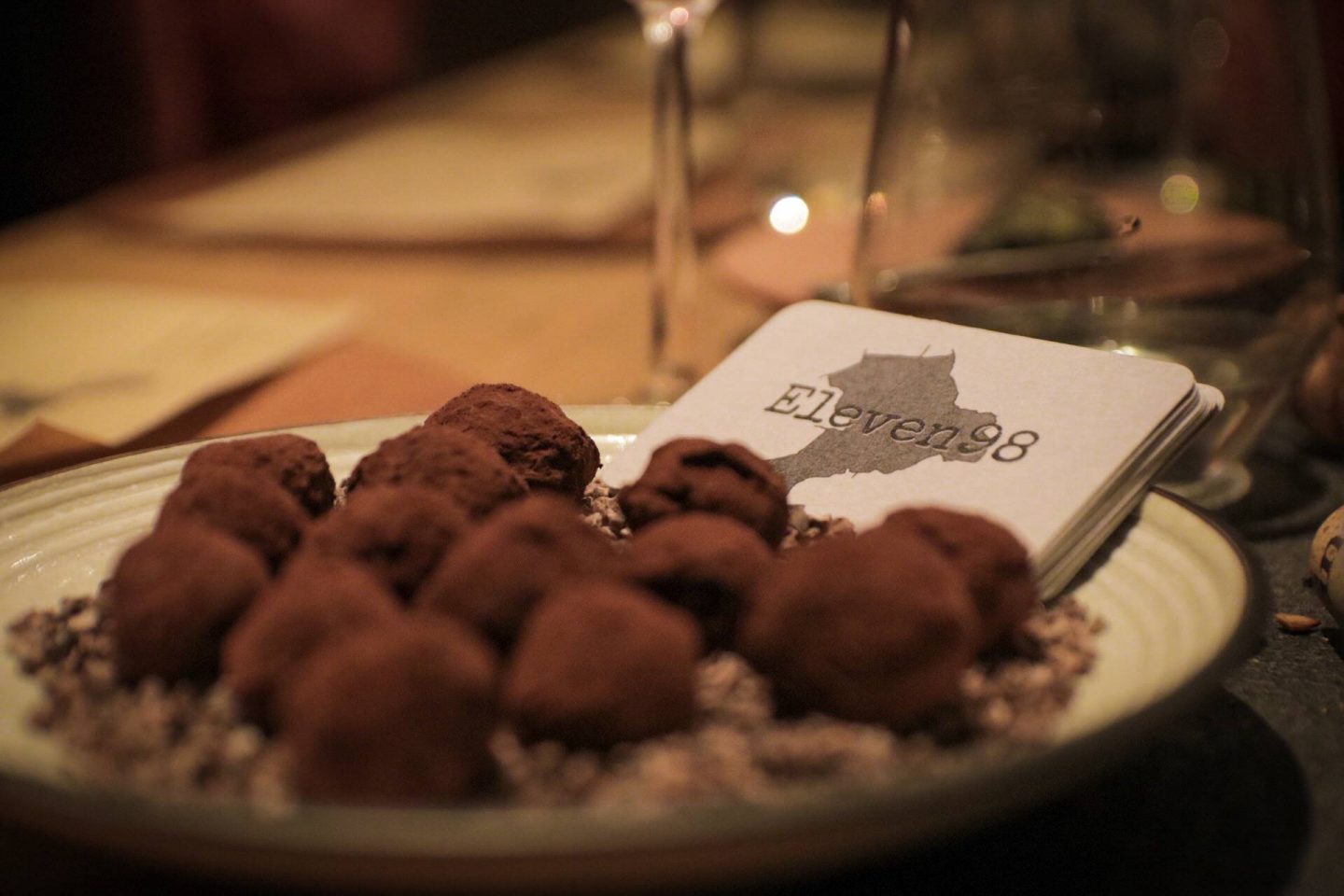 I left feeling so very inspired and since leaving the Eleven98 supper club I have made an effort to buy more locally sourced food. It didn’t get off to the best start as both my local farms shops were shut on a Monday but I’ve learnt that now. I’ve also looked into growing food on the balcony such as strawberries or tomatoes as we get through quite a lot of them. We’ve also discussed holding a dinner for friends with foods only sourced from Essex, we did toy with just our local area and that proved a little tough for a first attempt.

Thank you, Adian, for a wonderful meal, for educating us and for inspiring us.

Share:
PREVIOUS POST
"How Lingerie has Transformed over the Years with #DecadesOfLingerie"
NEXT POST
"The Best Places in Europe for a Summer Proposal"
1 comments so far.

One response to “Sustainable Chef’s Table Dining with Eleven98, Hackney”