I was very kindly invited to review 1947 in return for a review. However, as always, all opinions are entirely my own.

We all know how much I love Indian food, I’m not that discreet about it so I love it when I get invited down to feast away, especially when the restaurant is deemed to be the next big thing in Indian dining in London!

1947 like to pride themselves on being able to understand the power of shared dining experiences to bring together cultures and generations which gives the restaurant a fantastic atmosphere, an incredible menu and the bones to become my new favourite place to find wholesome Indian foods in London! 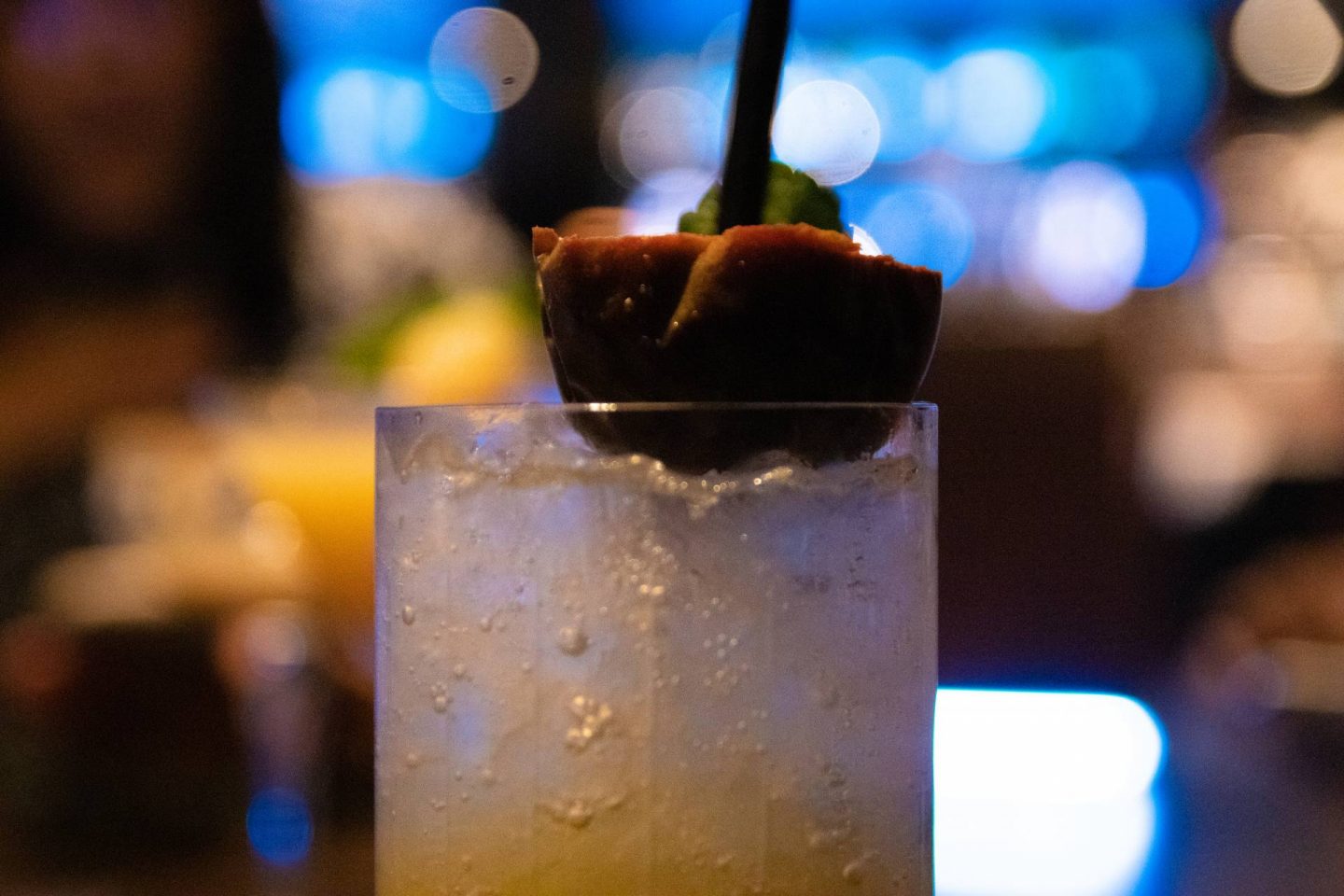 We kicked off our evening by selecting a drink from the artfully created cocktail list with classics and variations of classics, designed and concocted by their in-house experts. I opted for the Rum Fashioned made with Mount Gay Rum, Brown Sugar and Angostura Bitters which was so good I may have had a good few of them!

Chef Krishna Negi, who is widely renowned for working at Tangawizi & Michelin-starred Vineet Bhatiahas, has created a menu that showcases an array of flavours, styles and techniques that will leave every guest feeling full, happy and fulfilled. The menu is split into Nano Plates, Small Plates, Sharing Boards, Biryani & Rice, Sides, Bread & Desserts.

As we were there to sample the new menu, we trusted our wonderful waiter to pick dishes he thought we’d enjoy. There were so many, that this is a pretty photo heavy post, and there are some non-veggie dishes that I’m going to share but rest assured, the menu has so many veggie options that you could happily come here and not eat any meats as I did. 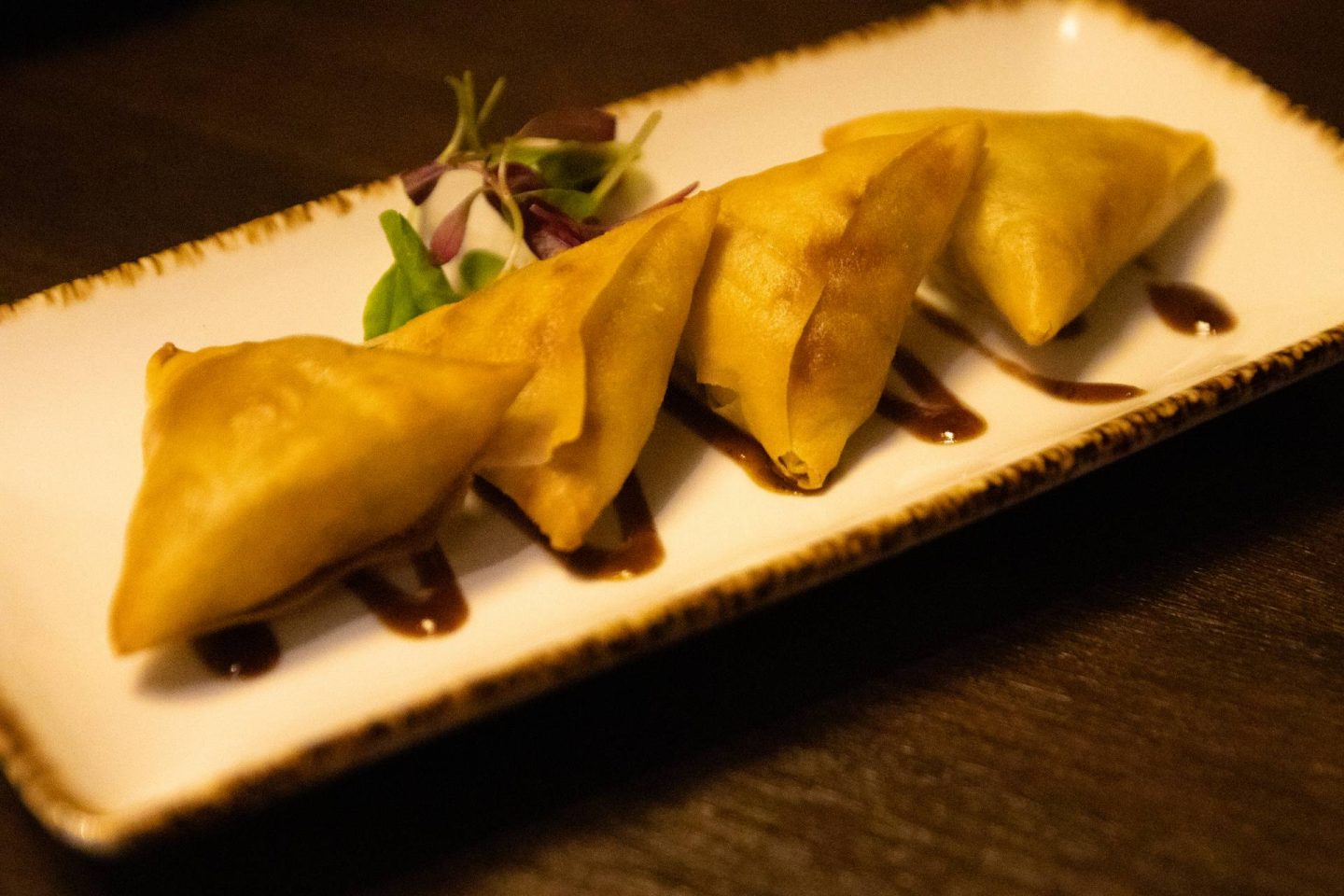 The first of the dishes I tried were the 1947 Avocado Bombay Bhel which were delightful rice puffs that were crispy and the way the avocado and pomegranate complemented the Bhel was just lush and the Asparagus, Corn & Coconut Samosa where super cute bite-sized samosas crammed with flavour! 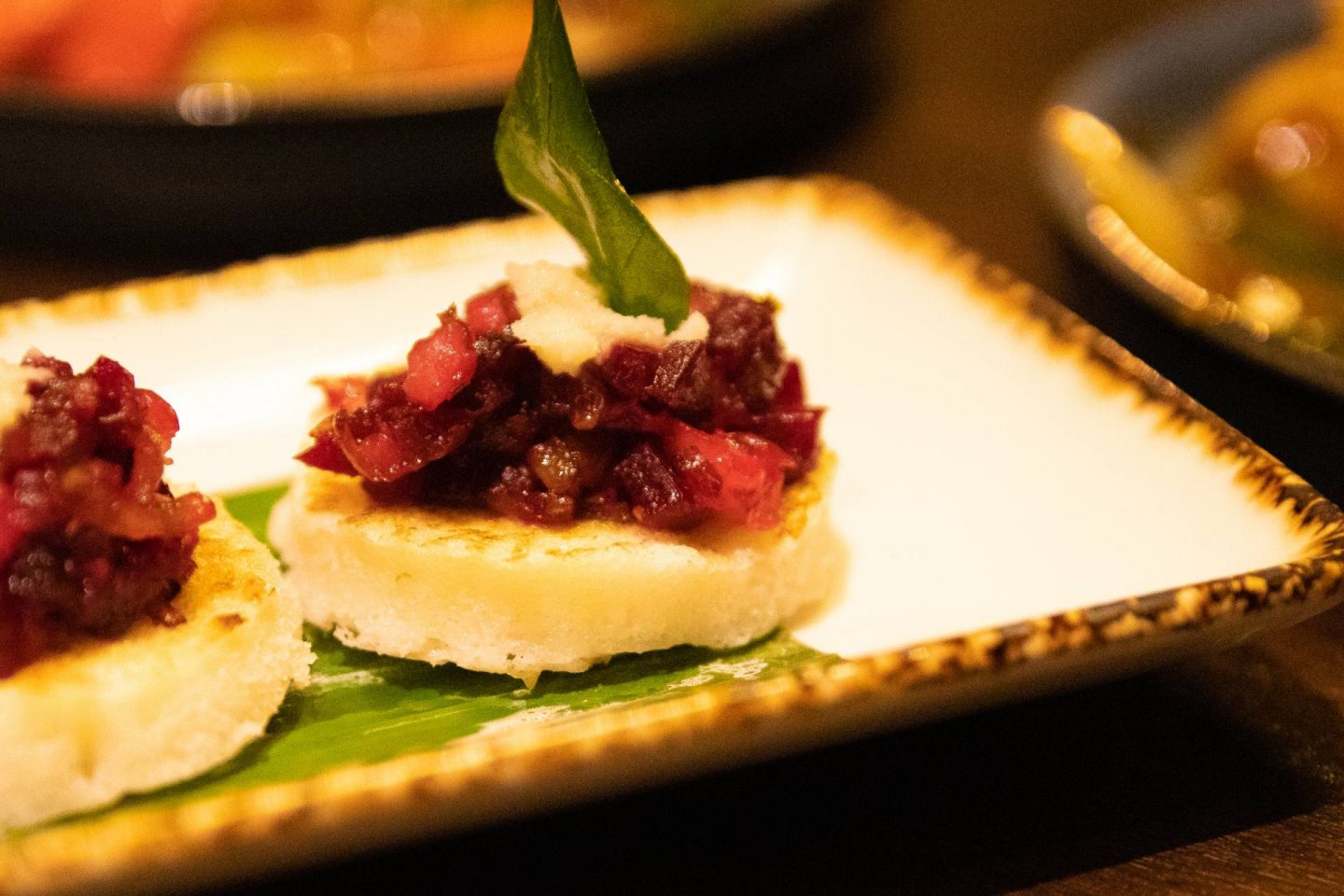 Another divine veggie small plate was the Mini Beetroot Masala topped white lentil and rice flour pancakes that were  tempered with mustard seeds and curry leaves. These would be a great little dish to order whilst sitting and having a few cocktails as they were so easy to eat. 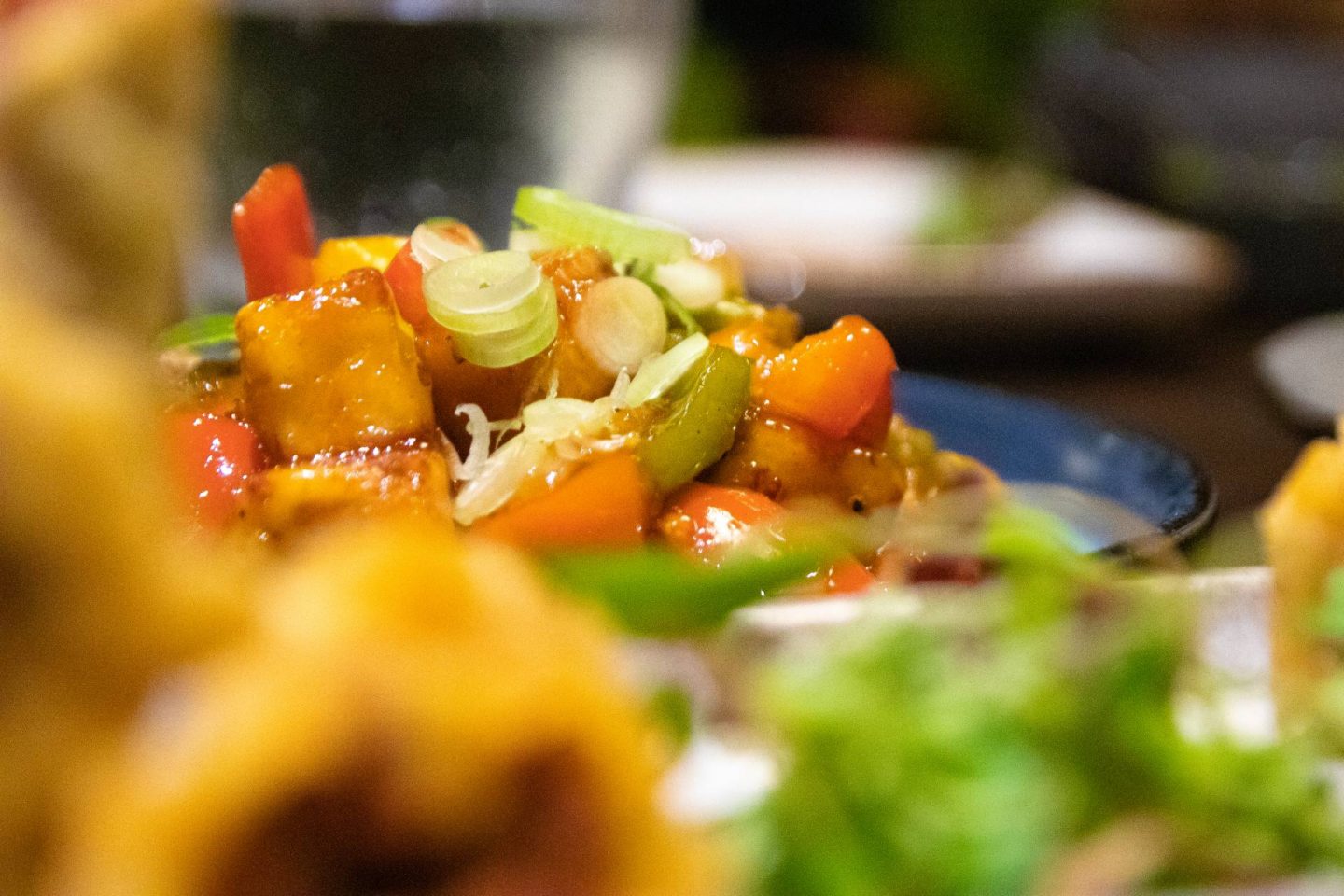 So one of my weaknesses is Paneer cheese so when I saw the Chilli Paneer on the menu, you can be sure I requested some of that! The Cubes of paneer were tossed with bell peppers and chilli garlic sauce which is something I could have eaten a good few portions off. Maybe next time, I’ll just order a few of those with rice and Naan as it was a welcomed change from Saag Panner! 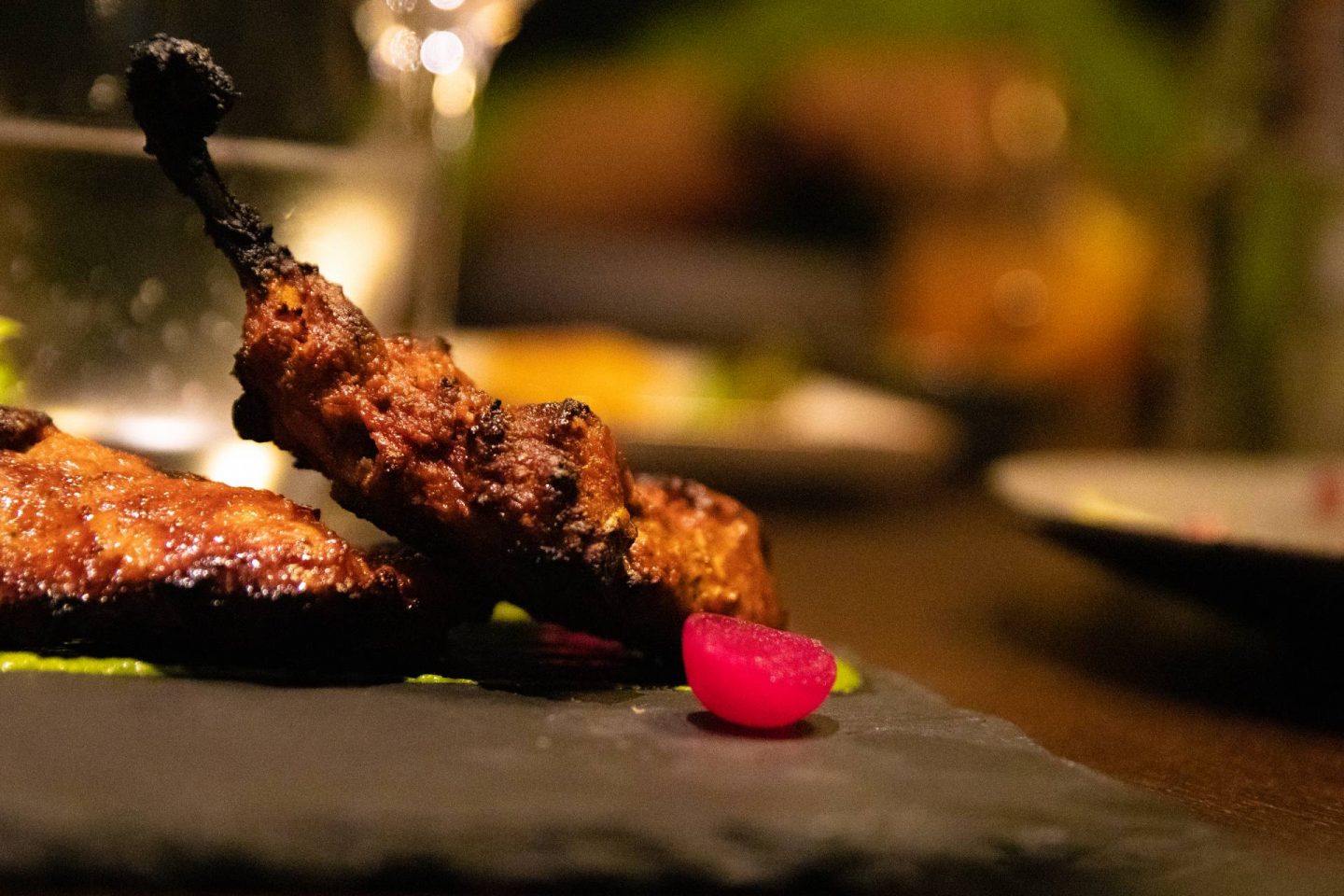 For the meaty options, there were Grilled Lamb Chops marinated in Kashmiri chilli and selected homemade spices served with green herb chutney and the signature Maharaja Prawns. There were plenty more too!

We then dived into the main courses which I’d made sure I’d saved some room for! 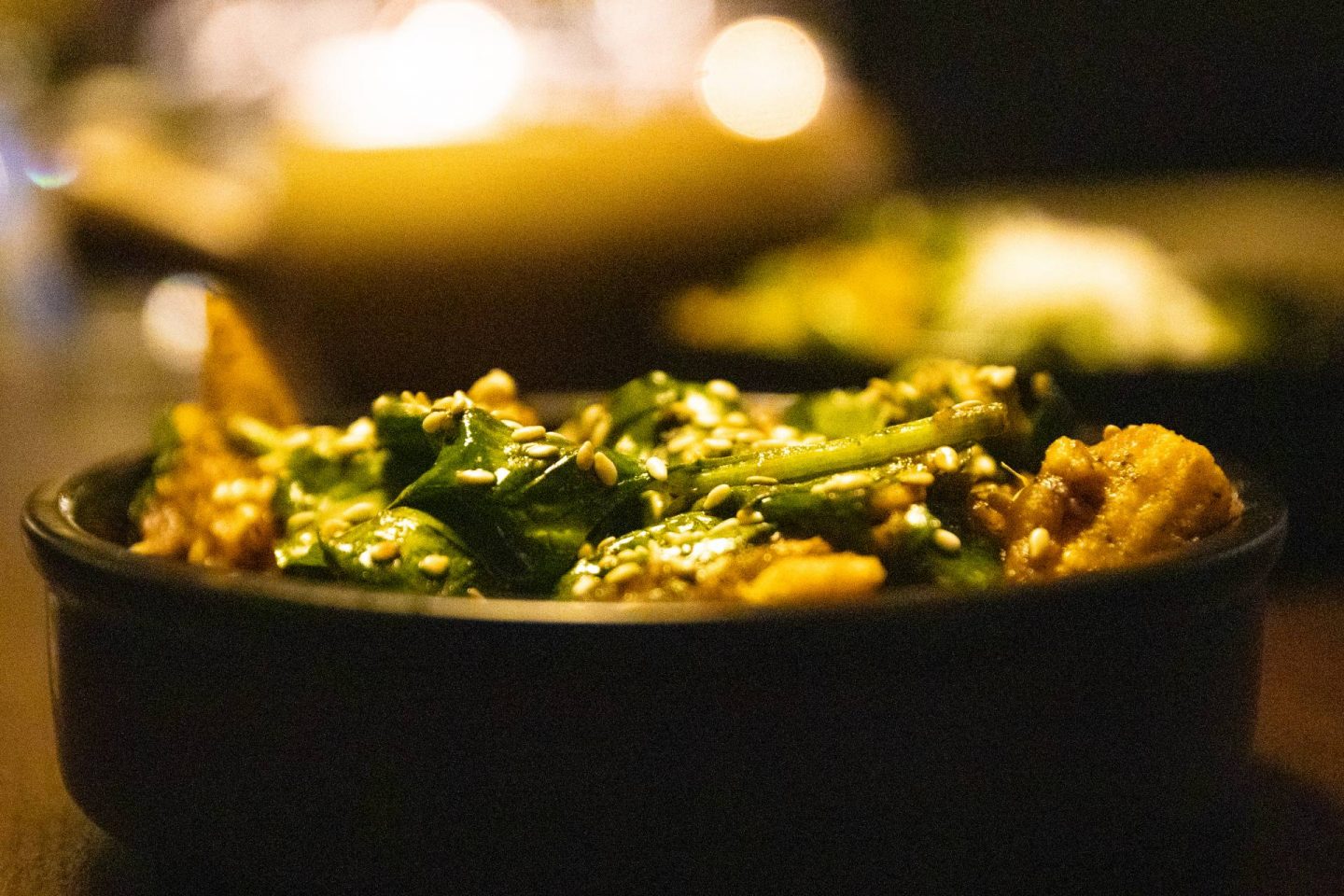 There were so many incredible veggie options that donned our table including the Baby Corn Methi Palak which was baby corn stir-fried with sun-dried fenugreek leaves and fresh baby spinach which was unreal. We also had a very tasty Paneer Butter Masala that was paneer slow-cooked in a buttery tomato sauce flavoured with Sun-dried fenugreek leaves which would 100% be getting ordered again.

Some of the veggie sides dishes were Daal which I’ve never really had before so it was great to be able to try new flavours. We had the Dall Tadka made with yellow split lentils tempered with cumin and garlic and the Daal Makhani, which was my favourite of the two, which was black lentils soaked overnight which are then gently cooked on a slow fire, and finished with butter & cream. These were perfect for scooping up with the wonderful selection of Naans and Roti we had been served.

We also had such a range of meat-based dishes on the table including 1947’s version of a ‘Hug in a Mug’; a cup of Butter Chicken! This was chicken tikka simmered in a buttery tomato sauce flavoured with sun-dried fenugreek leaves that went down so well on our table. There was also a Chicken Dum Biryani and so many more that I couldn’t even keep up with it all. 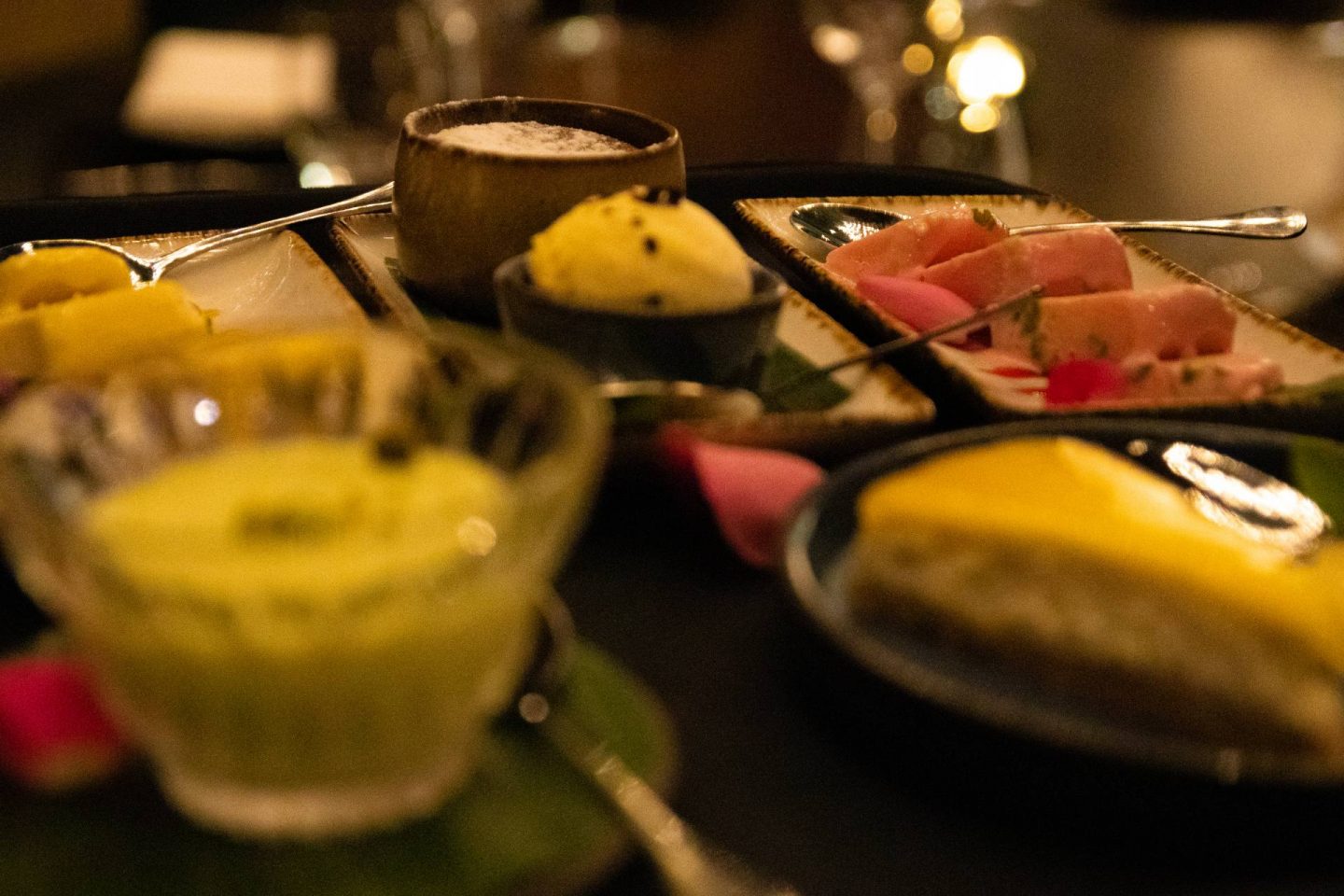 Despite being full to the brim we obviously had to try the array of desserts that soon graced our table including a Chocolate Fondant with Vanilla Ice Cream, Rose, Mango and Salted Caramel Kulfi which is always my go-to dessert, Homemade Lemon Cheesecake and the famous pistachio, cardamom and coconut flavoured rice pudding known as Phirini!

Our service at 1947 was second to none and the atmosphere has set the standard for my future midweek restaurant visits! I can’t fault anything about our evening; I left having tried incredible new foods, making new friends and a fair few banging cocktails.

Can I have a table every week please, 1947?! I don’t think I’d get bored of eating there any time soon! And on your way out, don’t forget to grab a snap with the giant-sized hand-crafted roses that paper artist, Karen Navalta, designed and crafted from recycled cardboard that is NOT to be missed!

Where are the Best Places to Relax…

Share:
PREVIOUS POST
"Are You Getting Stressed With Wedding Planning? Here’s What To Do *"
NEXT POST
"Top Tips for Painting your Home and Renovations *"
0 comments so far.