I was very kindly invited to review the Roof East in return for a review.  However, as always, all opinions are entirely my own.

As you all know, I BLOODY LOVE Halloween and this year I finally got to celebrate in true style this year which made me very happy. We were invited down to Roof East on the 7th and 8th floors of Stratford Shopping Centre which is the original shopping centre in Stratford, not Westfield! It’s a few minutes from Stratford station and Westfields.

Upon arrival, I did my very best to avoid all of the roaming zombies but I didn’t do too well. I well and truly got bitten. 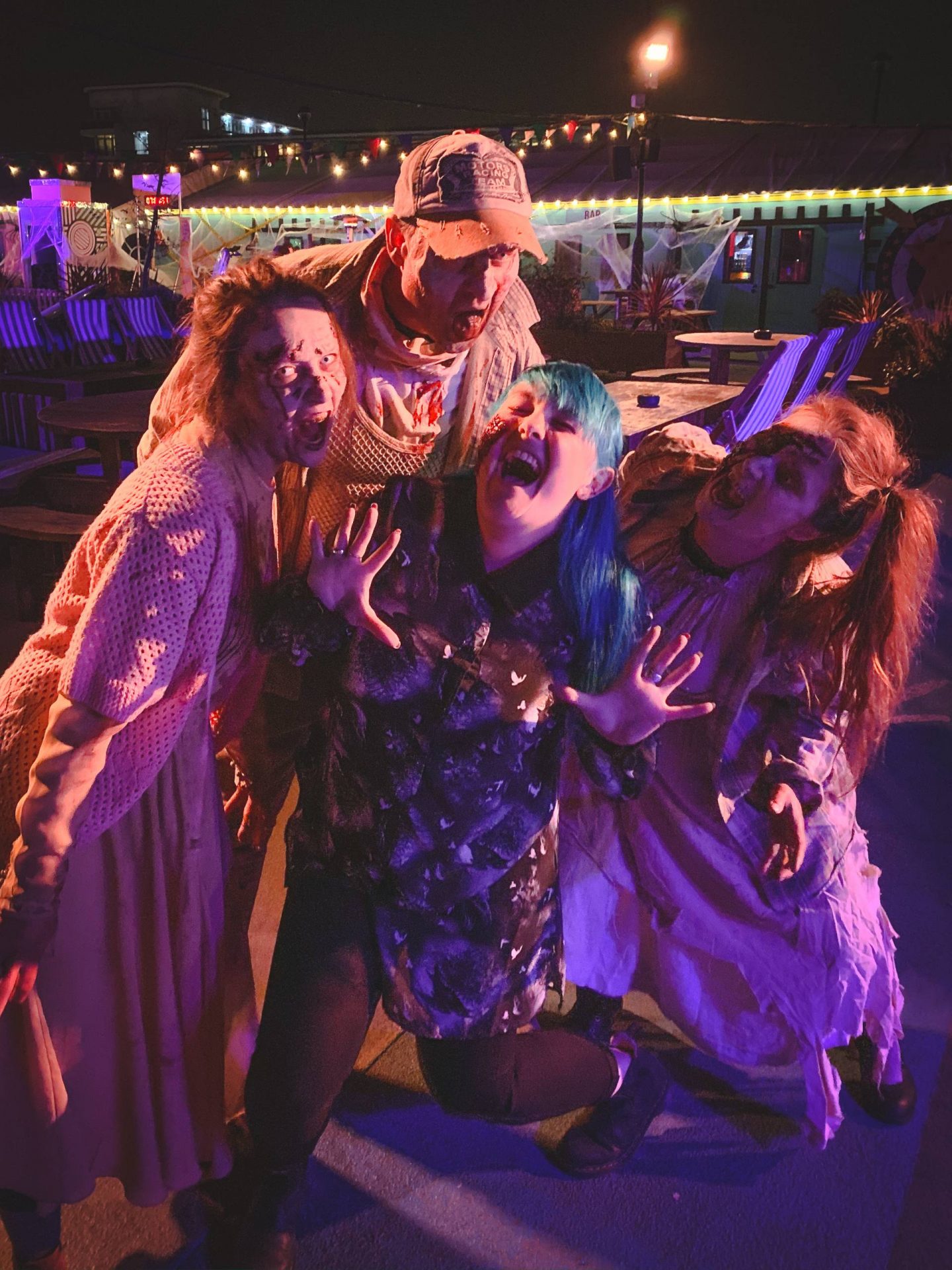 Ok, I joke…. I had my make up done by the hugely talented team from Iconic Entertainments. I explained that I wanted to have a bite/zombie attack wound on my face as I had an idea for a photograph that I wanted to create which you will have seen as the feature image on this post… and on my Instagram! 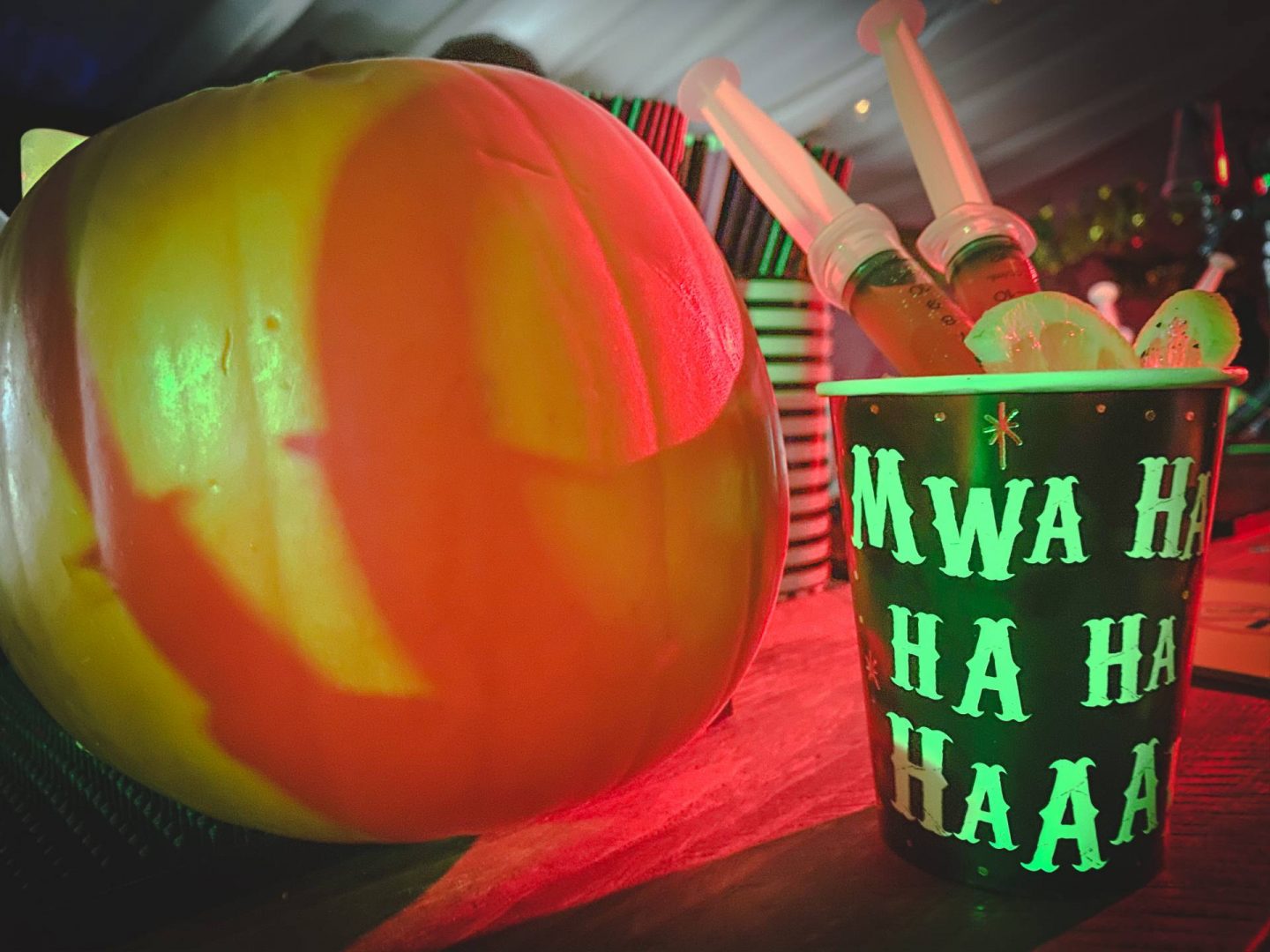 After being made up, we had to have a spooky cocktail, didn’t we!

We both had the Dragon Blood cocktail which was two gin filled syringes with spiced chilli and tabasco that gave it such a kick it actually warmed my insides which was perfect for a cool, Halloween evening. There were other spooky cocktails on the menu too, including Devil’s Eyes which was a blend of sweet organic cherry tomatoes infused with Espolon Tequila and the ‘Panchos Payaso Punch’ which was a blend of Espolon Tequila, juicy prickly pears fizzed with fiery ginger. 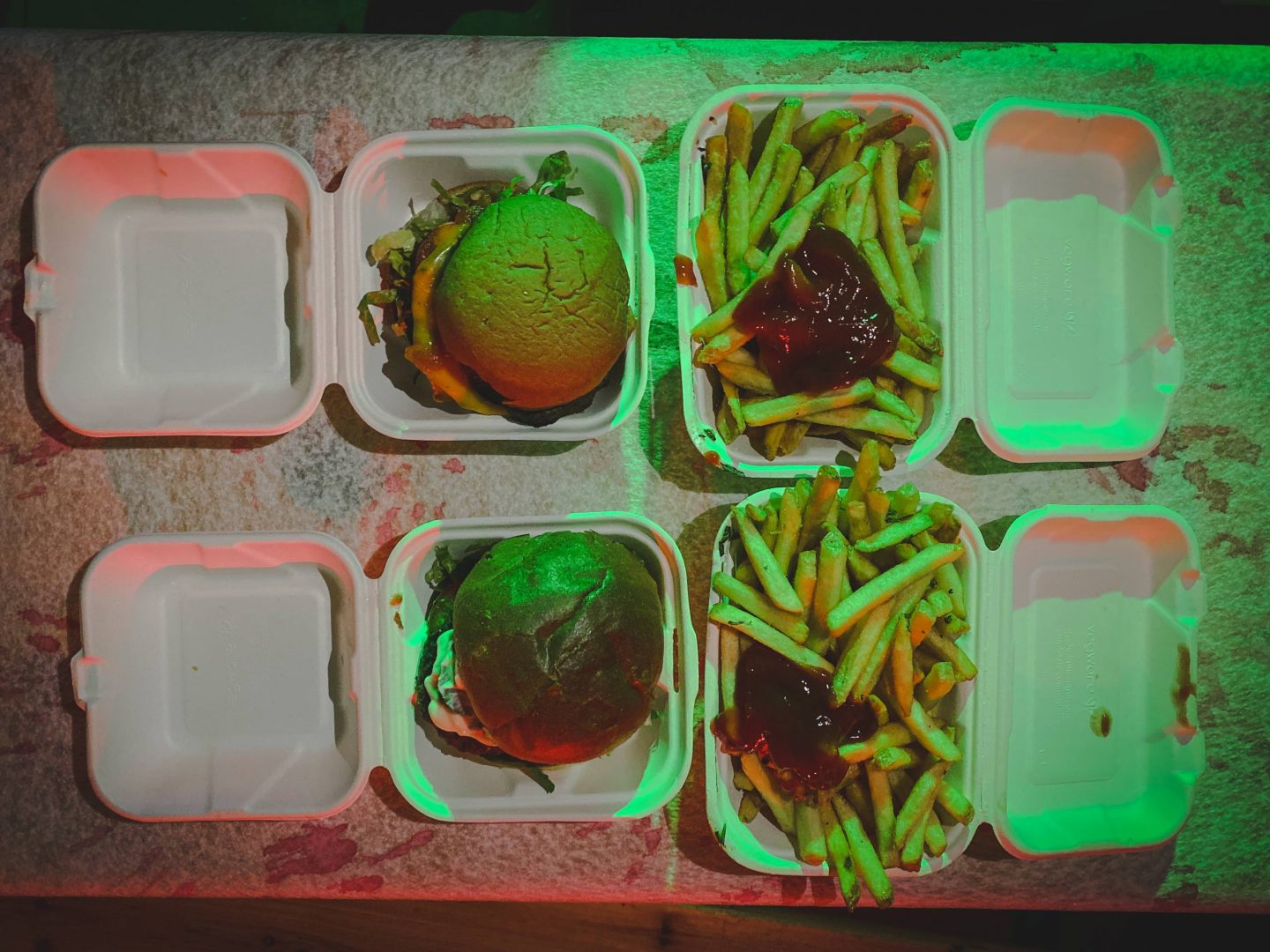 Before we continued drinking, we obviously needed to line our stomachs so we headed over to Jimmy’s Lodge Pop Up which was serving Ski Lodge style dishes. I had a banging Mushroom Burger with vegan cheese, pear and walnut chutney, vegan wholegrain mustard mayonnaise and salad which I’d happily eas again. Mike had the Lodge Raclette Burger which was 4oz British beef patty, Raclette cheese, truffle & confit garlic mayonnaise, pickles and caramelised onion chutney which Mike couldn’t get enough of! We both had a side portion of skin on chips but we could have easily shared one as we had so much food! 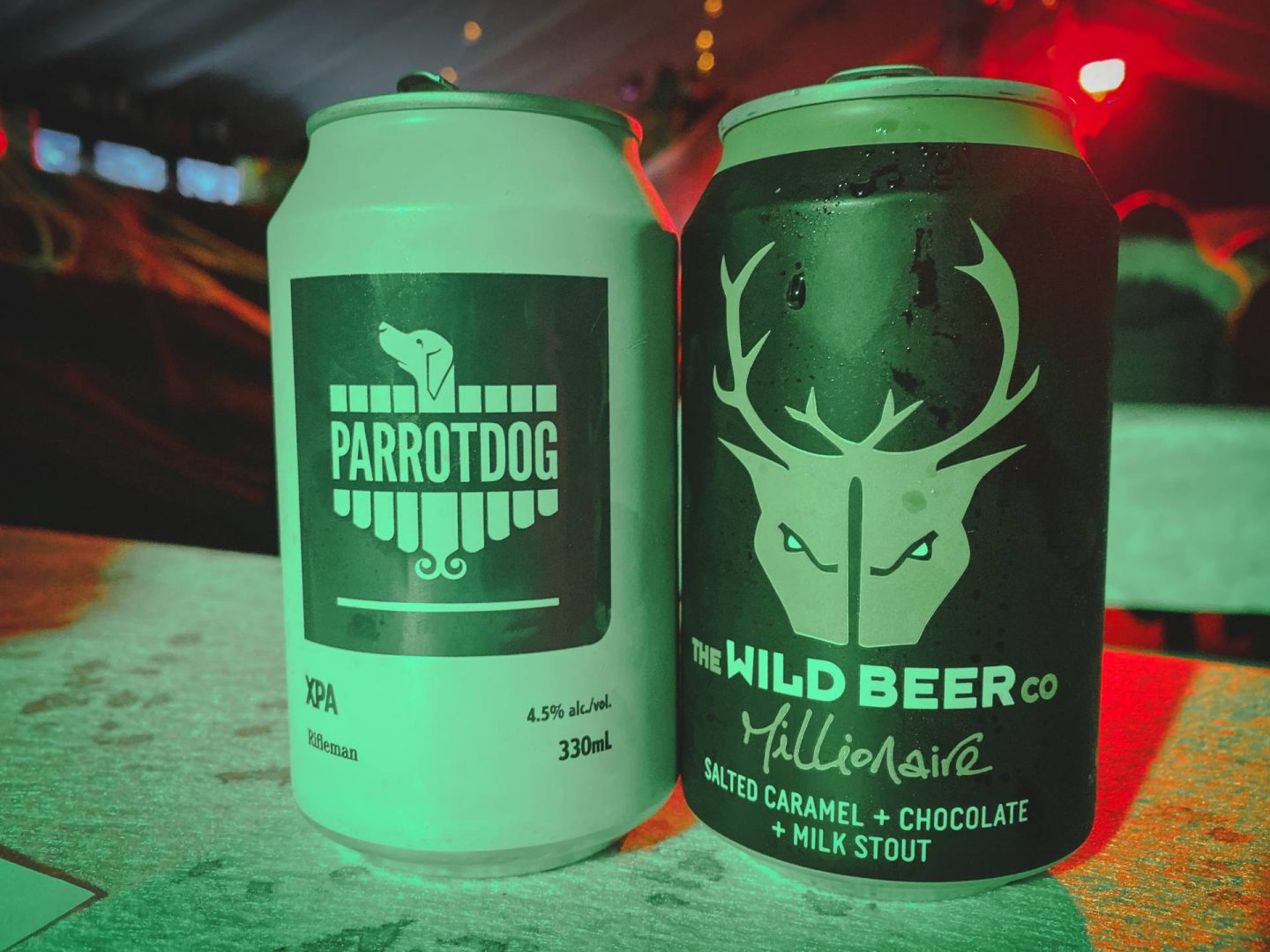 We had set up shop in the Hops Bar as we are both heavily into our Craft Beers and the selection here was one of the best I’d seen in a long time. We drunk from some of our favourite breweries and found new ones we loved too. 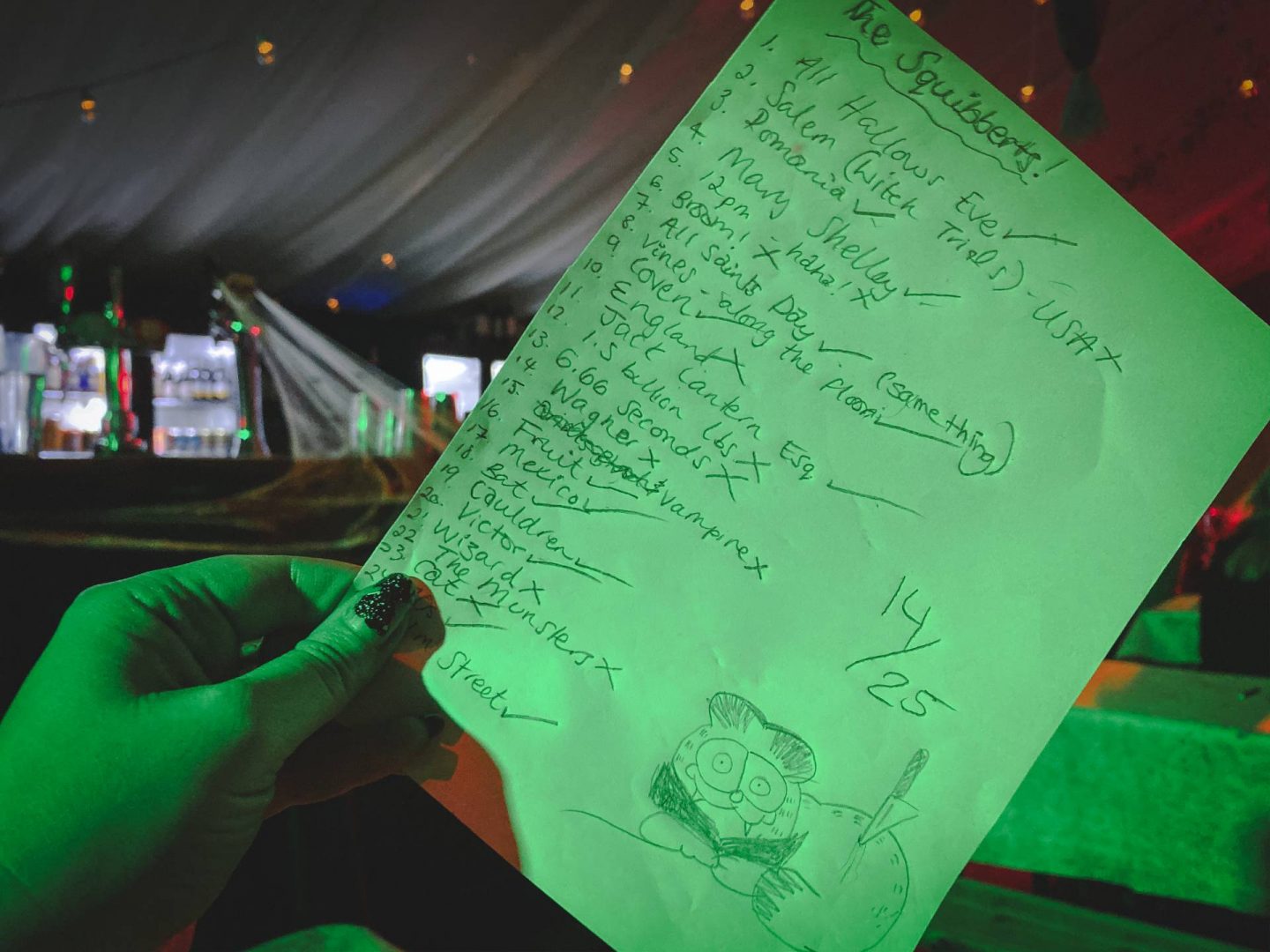 Much to our surprise, the bar we were sat in had two quizzes planned so we decided to stay and play.

Boy, were we glad we did! We won the first quiz that was Halloween based which won’t come as a shock to those that know me well, but I was genuinely impressed with Mike’s spooky knowledge! As we won free drinks we ordered another round of craft beers and stayed put for the general knowledge quiz… which we also won after a quickfire draw breaker round. I’m thinking we need to start quizzing professionally as we are clearly wasting our evenings away not being at local pub quizzes! 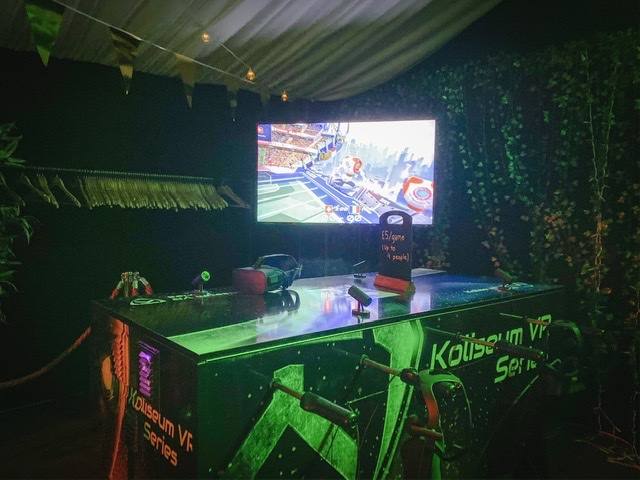 We were due to play on the House of Foos VR experience, but due to having had my spooky zombie make up done I decided it was best not to as I would have gotten fake blood all over the VR headsets and I don’t think that’s very fair to the other users! We’ve said we will return to play London’s first VR foosball experience which is run by SFG Club; House of Foos is a VR mix of traditional football and table foosball that will really give your date night a new competitive feel, plus it’s only £5 for up to 4 players so it’s a bargain too!

We had such a great night at Roof East that we have planned our return trip to challenge our VR Foosball skills, eat more great burgers and drink ever more craft beer. I think you should to that same too!

A Class in How to Make Russian…

Hen Party Ideas For All Tastes and…

Ever Wondered Where Your Food Really Originated…

One response to “A Frighteningly Good Date Night at Roof East, London”