Tasting my Way Through Borough Market with Mimo, London

I was very kindly invited to review the Borough Market Tour from Mimo with Love Pop Ups London in return for a review.  However, as always, all opinions are entirely my own.

This may come as a shock to you, but despite being an almost Londoner for all of my life, I’ve never been to Borough Market. The thoughts of the crowds always put me off and I really would have no idea where to start where there is just so much on offer. So, Mimo slid in and offered for Sara to take myself and Joanne on a Borough Market Tasting Tour to try their personal favourites and what a great way to do it! 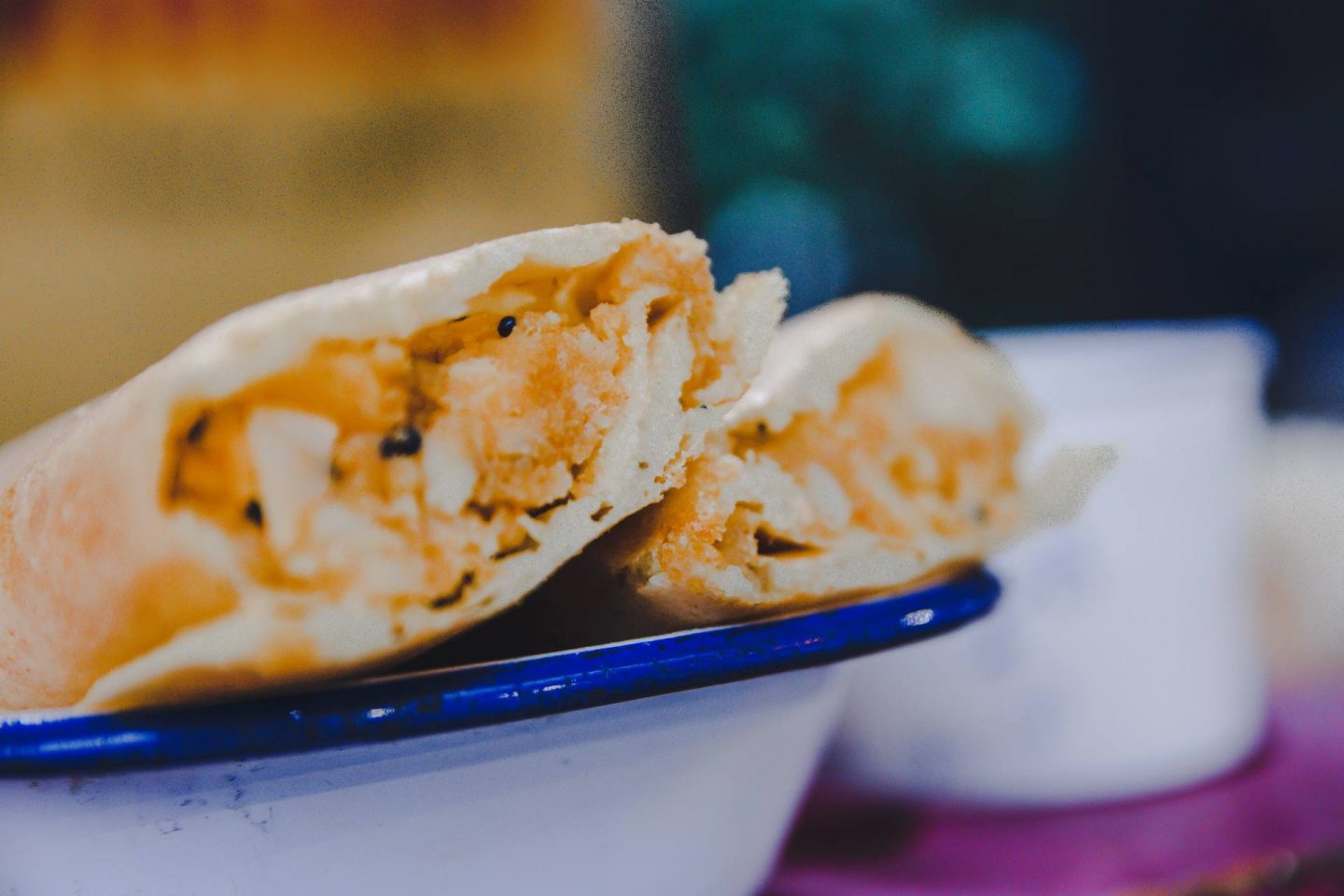 We kicked off our tour with a divine veggie Dosa from Horn Ok for the veggies and a Scotch Egg from Scotch Tails and whilst we chowed down we learnt the history of the market which has been a market for at least 1,000 years in one form or another, but it wasn’t until 1756 that it was moved to its present location.

Once we had empty plates, which didn’t take long as the food was all so scrummy, we moved on to our next stall. 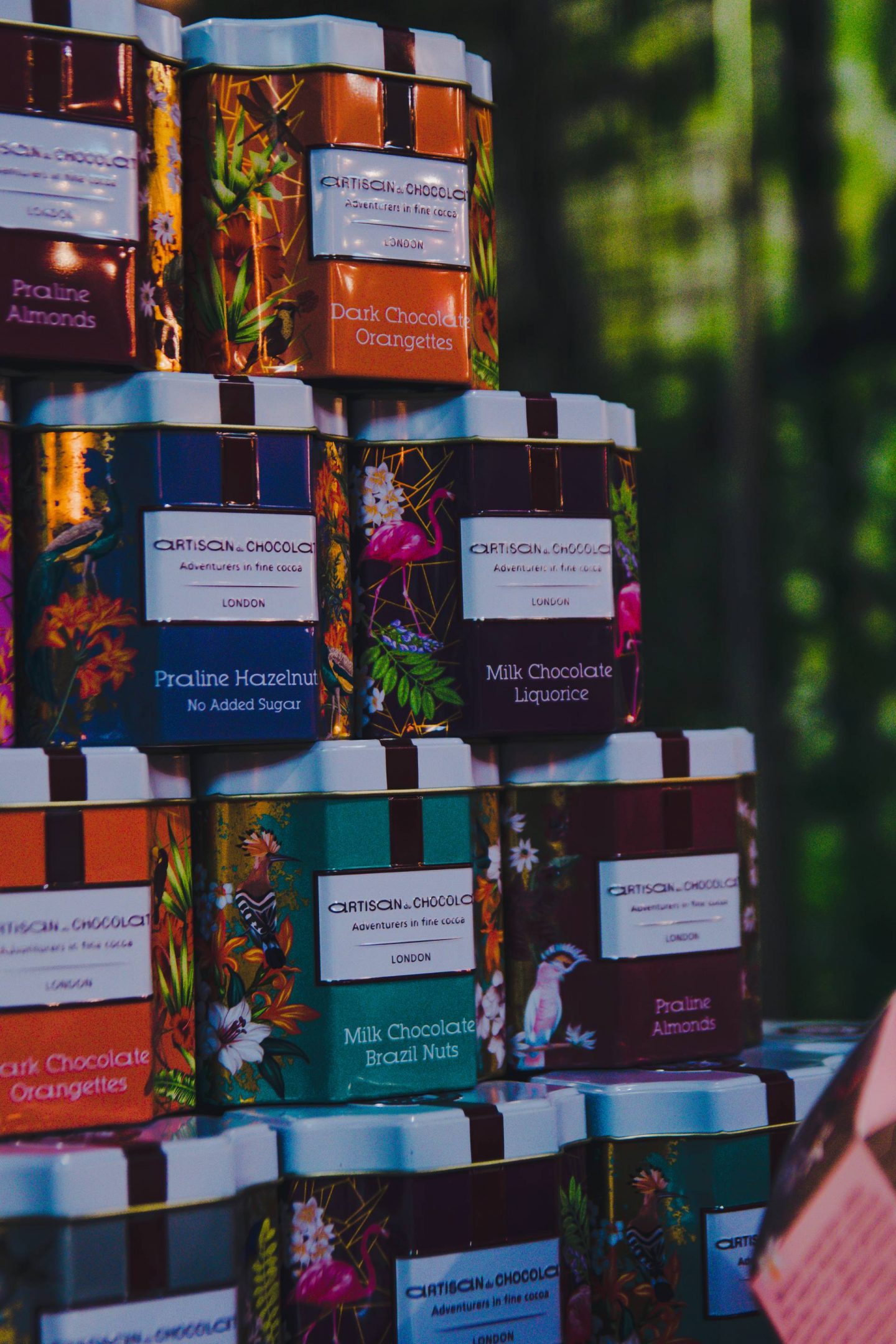 This was the Artisan du Chocolat who process their chocolate from ground beans, before conching and refining it in their kitchens in Ashford in Kent. They are well known for their Salted Caramels and oh lordy, I can totally see why; they were divine. The boxes you can purchase are also stunning which make these the perfect gift. I’ve got them in mind for Christmas Hampers as they would suit that so well. 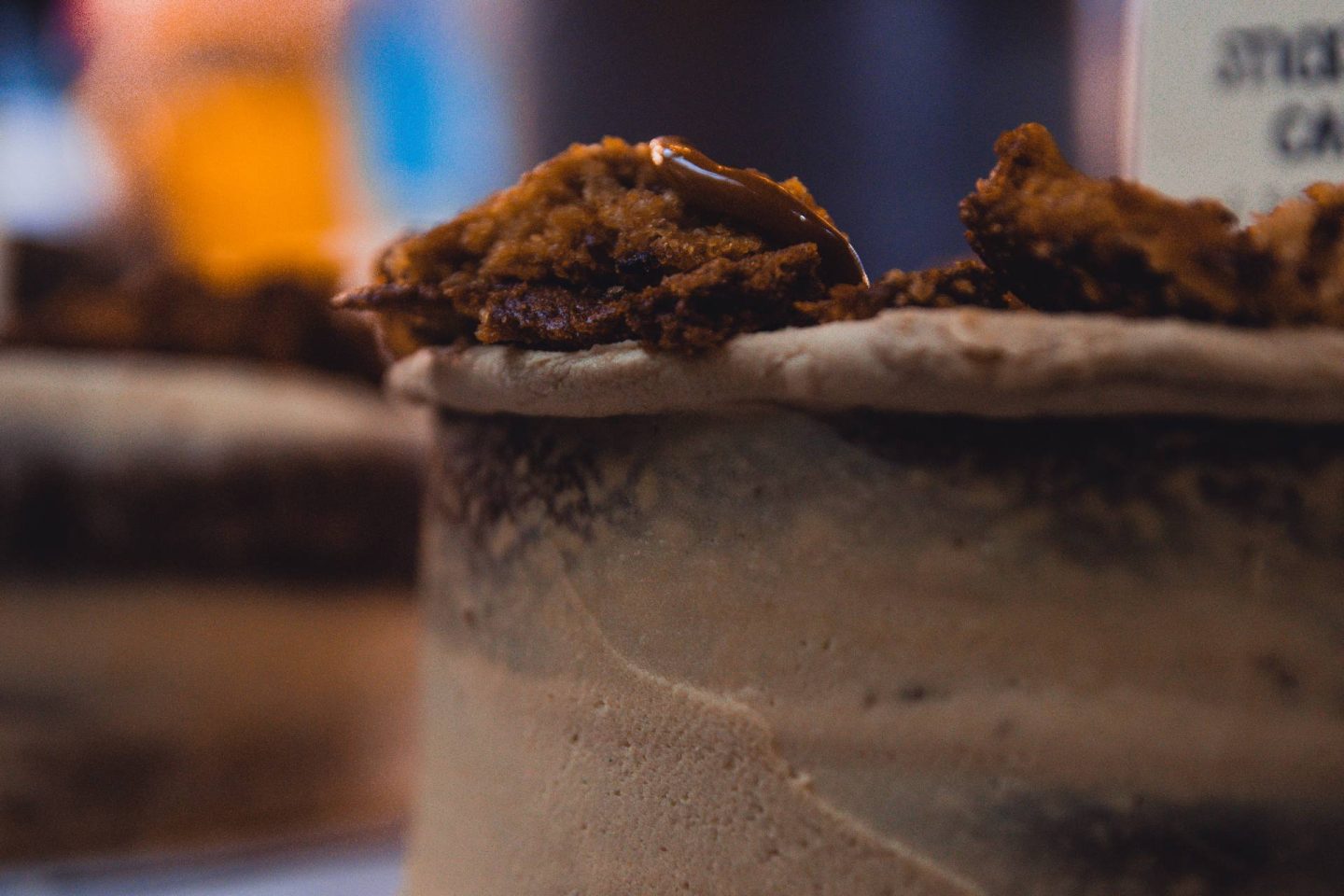 Keeping on the trail for the sweet tooth, we next visited the Luminary Bakery who provide women from disadvantaged backgrounds the opportunity to gain employable skills and build a network of support which is something I’m super willing to get behind. All of the ingredients are also ethically sourced which makes them even better in my eyes.

Not only are the Luminary Bakery doing great things for these women, but the cakes also taste delicious too. 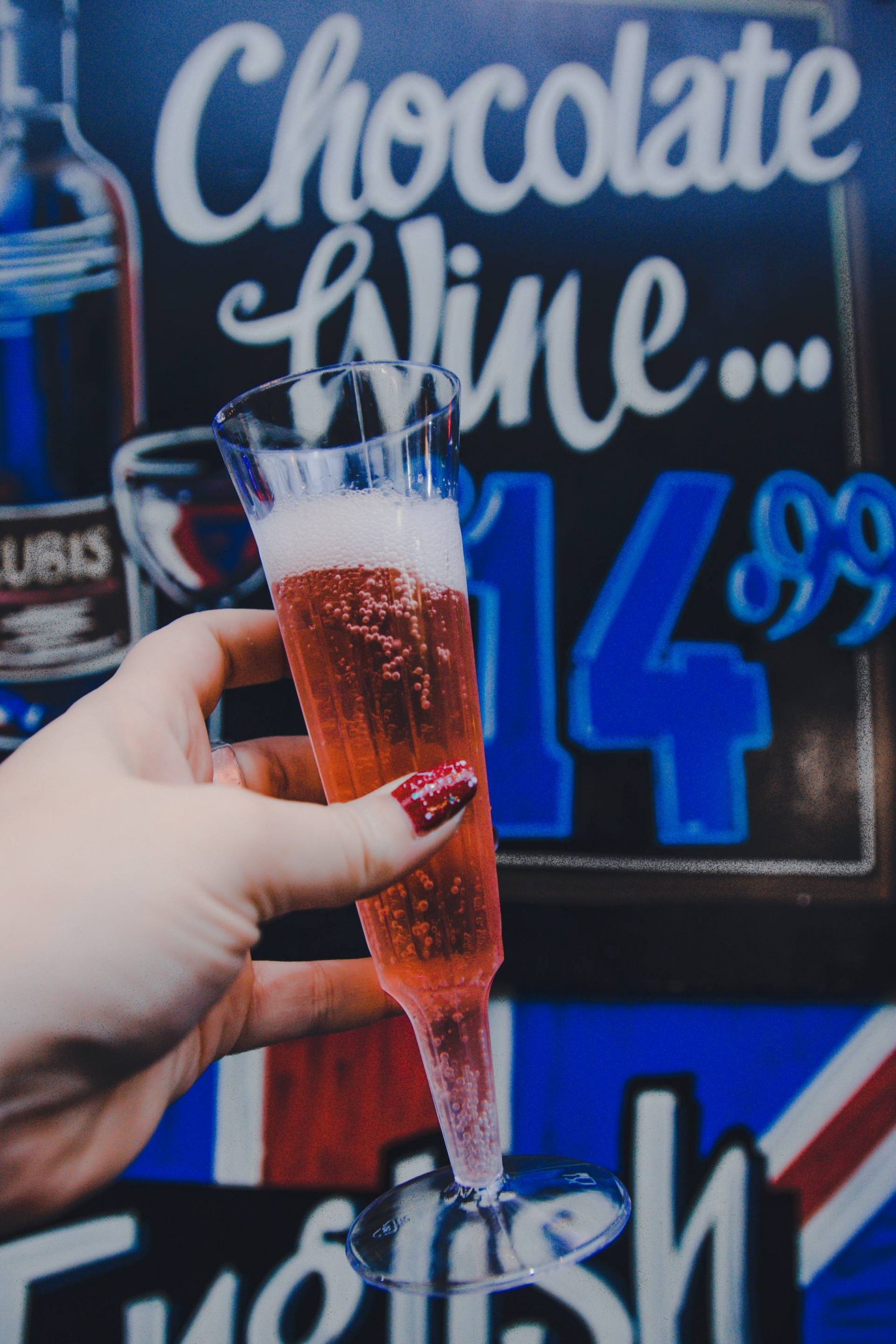 It was then time to grab a bevvy because that’s what you do at 11am on a Thursday, right?! The Cartwright Brothers Vintners supplied this in the form of a bottle of English Pink Sparkling Wine which went down a right treat. If like me, you’re really into trying English produce then the Cartwright Brothers have a growing range of English wines, spirits, mead and fruit wines! But if you just love a good wine then they’re still super great for that too! 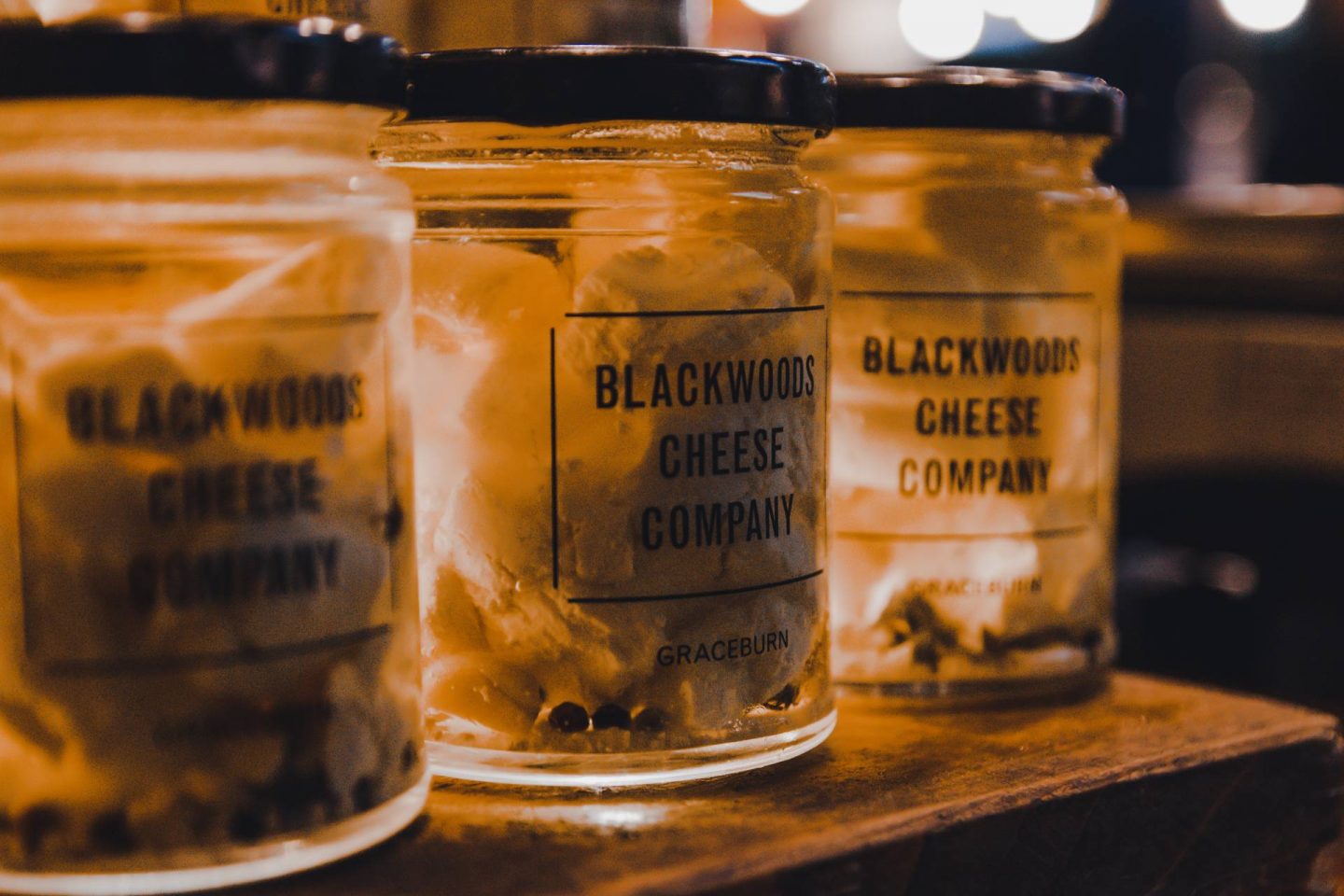 No food tour would be complete without a stop at a cheese stall, so we were over the moon when we got to stop at four! Yes, you read that right, we stopped at FOUR cheese stalls and I couldn’t have been happier.

The first was the Blackwoods Cheese Company who have been creating soft raw cow’s milk cheeses in their small dairy in Brockley, south-east London for the past six years. Pictured above is their most well-known cheese, Graceburn, which is jarred in a blend of extra virgin olive and rapeseed oils rather than brine which may sound super crazy but it really works! It’s so different, yet so scrummy! Another great one for Christmas Hampers I do think.

We also made a stop at Bianca Mora bringing the finest Italian produce to London! They are well known for their balsamic vinegar which can be purchased at different ages, their hand-carved leg of the Mora Romagnola pig, which spends its life feeding on acorns and chestnuts and their parmesan. I tried both the balsamic which I’m going to be making a purchase of as soon as I’ve got through the collection I have at home and the parmesan that’s made from two types of cows milk and they were pretty divine too. Cheese and balsamic are pretty much my weakness in life. 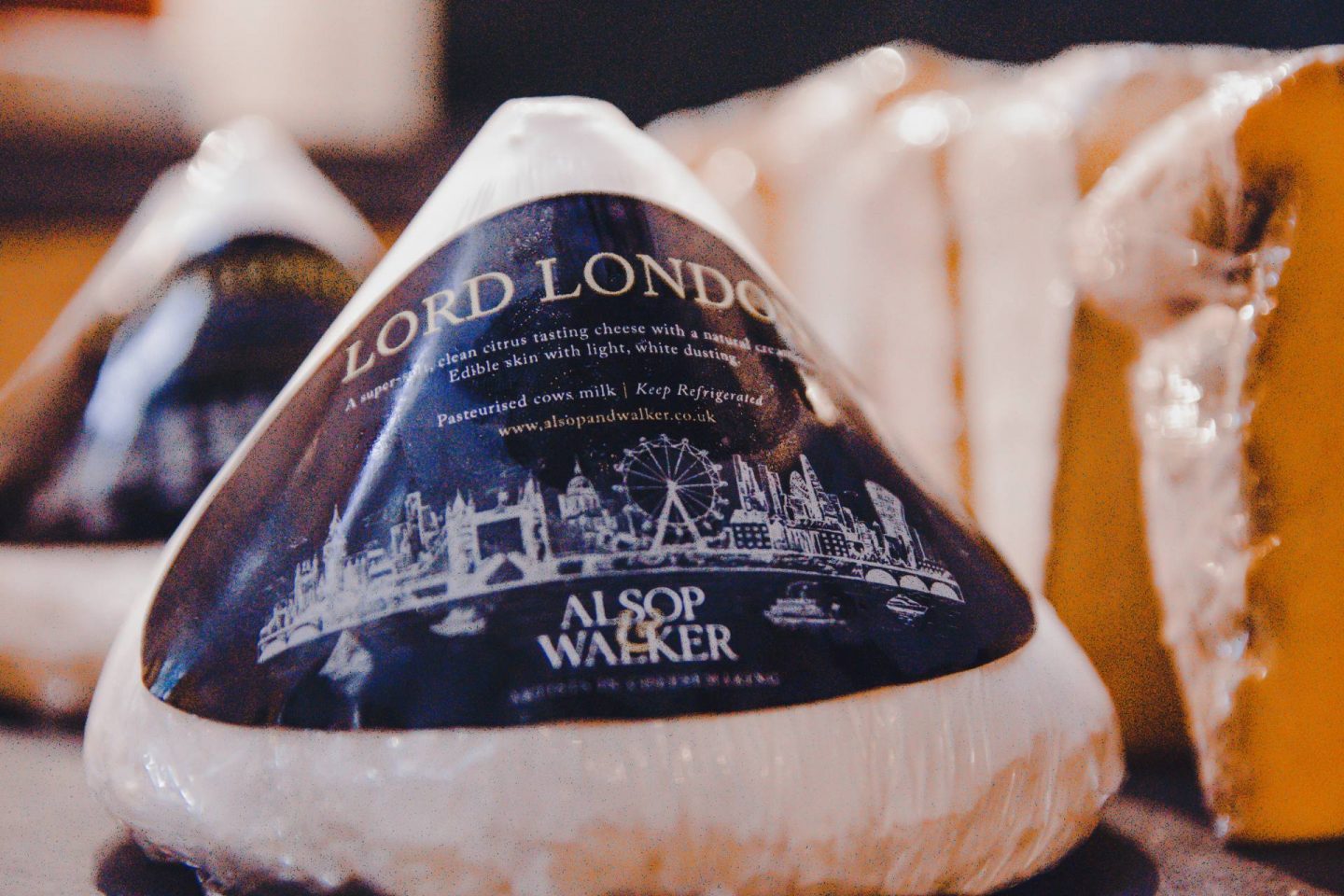 The next cheese stop was Alsop & Walker where I made my first cheesy purchase! We tried all of the cheese they have on offer and I actually found it pretty tough to pick just one to buy but I didn’t want to bankrupt myself over cheese, which is something I could easily do! I opted for the ‘Lord London’ which is a semi-soft, cow’s milk cheese kind of like a Camembert which was invented in honour of the London 2012 Olympics and also received a silver medal at the World Cheese Awards. It was even requested by Kate Middleton for the breakfast table at a royal wedding!

Our last cheese stop was the Bath Cheese Co who are a third-generation family-run farm who use milk from their own herd of cows. Again, we tried all of the cheese they had on offer and I had to be strict with myself; I only purchased the Merry Wyfe, which is an award-winning washed-rind cheese made with their Wyfe of Bath curds which are pressed and then washed in cider every other day for four weeks! Yes, cheese and cider combined!! 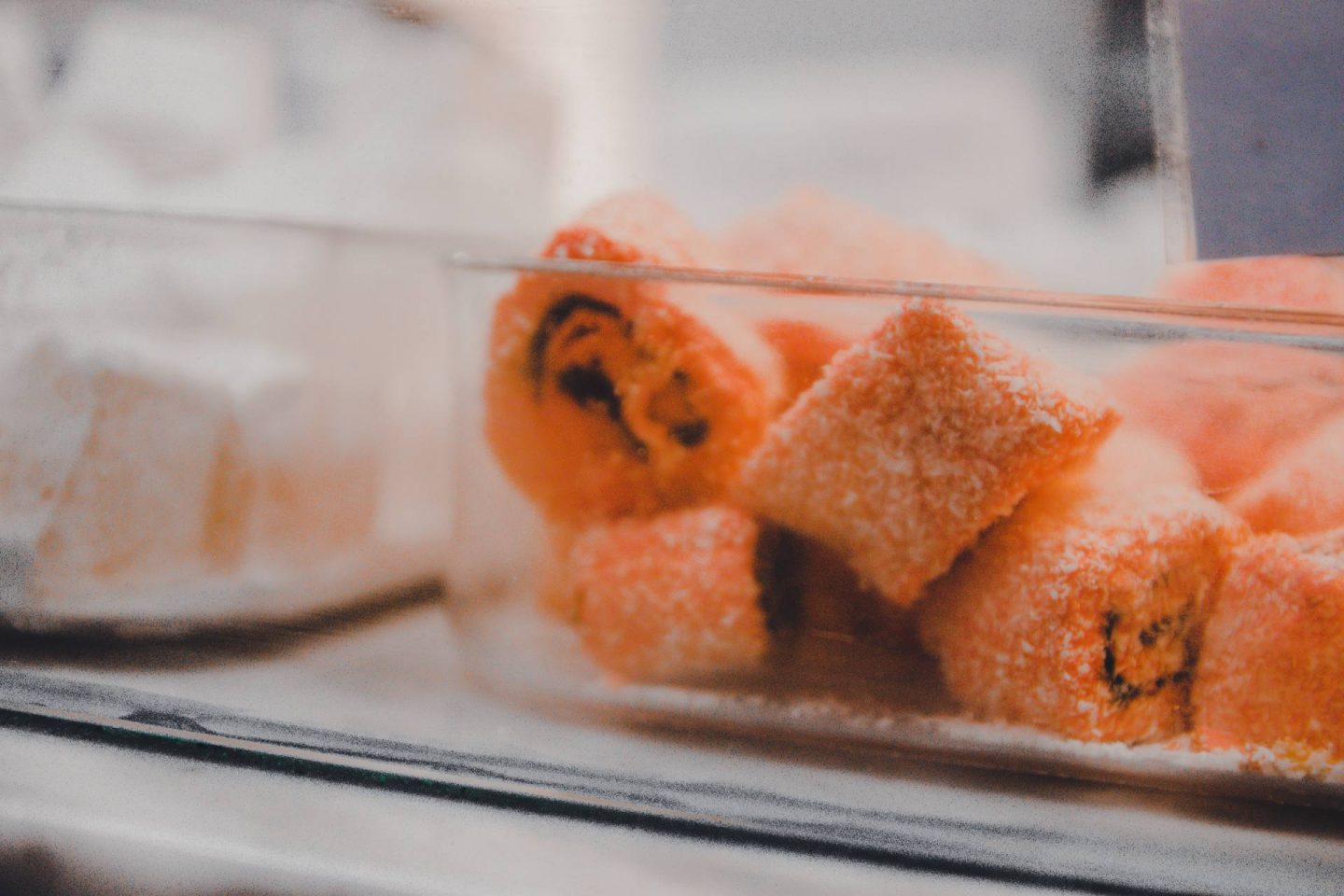 We did also visit a hell of a lot of other stalls including Bread Ahead for some tasty olive bread, Chegworth Valley for warm apple juice that kept us toasty on a rainy day, the non-veggies had prawns and scallops from Shellseekers, some huge olives from Borough Olives, Turkish Delight from the Turkish Deli and Nibs etc. to learn about their super eco-friendly granola. I was suitably filled to the brim.

Normally at the end of the tour, the group which can be up to 10 people return back to the Mimo kitchen just on the outskirts of the market itself to sample the produce bought on the tour the market and it’s then paired with wine, however on the day we took the tour there was a private function so we ate on our walk which I didn’t mind at all but I was a little disappointed to not have a wine pairing as I’m all about learning about wines!

Despite that, I had a great time and have learnt so much more London history that I’d highly recommend a tour like this if you have no idea where to start like I did.

Seeing The Best Of London On Your…

The Rise of Food Blogs