You may have seen, if you follow me on Instagram, that Mike whisked me away to Norway for just short of a week for a surprise 30th birthday treat. I had lots of lovely DMs about what we were doing and I promised that I would do a little blog series to share around and over three months later, here we go!

We spent the first two days in Oslo, and here’s what we got up to, where we ate and where we slept…

If you arrive at Oslo airport by an international flight as you will if you are coming from the UK, follow the Flytoget Airport Shuttle signs to find the large board with a clock on that counts down to the next departure. The Flytoget costs NOK 106 for a single adult which is around £8.50 and it will take you 20 minutes to reach Oslo town centre.

You can also get a taxi from the airport to the centre but this will cost you up to £50 so it’s rather costly!

The cheapest option but not by much is the regional train, which will take you 23 minutes and cost NOK 100, so around £8. This ticket will last you 2 and a half hours so keep hold of it if you are planning to go anywhere else during that time. If you plan on using their public transport a lot, then a 24hr pass is only £8.75.

If you are looking to do museums than you can pick up an Oslo Pass for NOK 445 per person for 24hrs (around £35)which will give you free public transport and free entrance to museums. 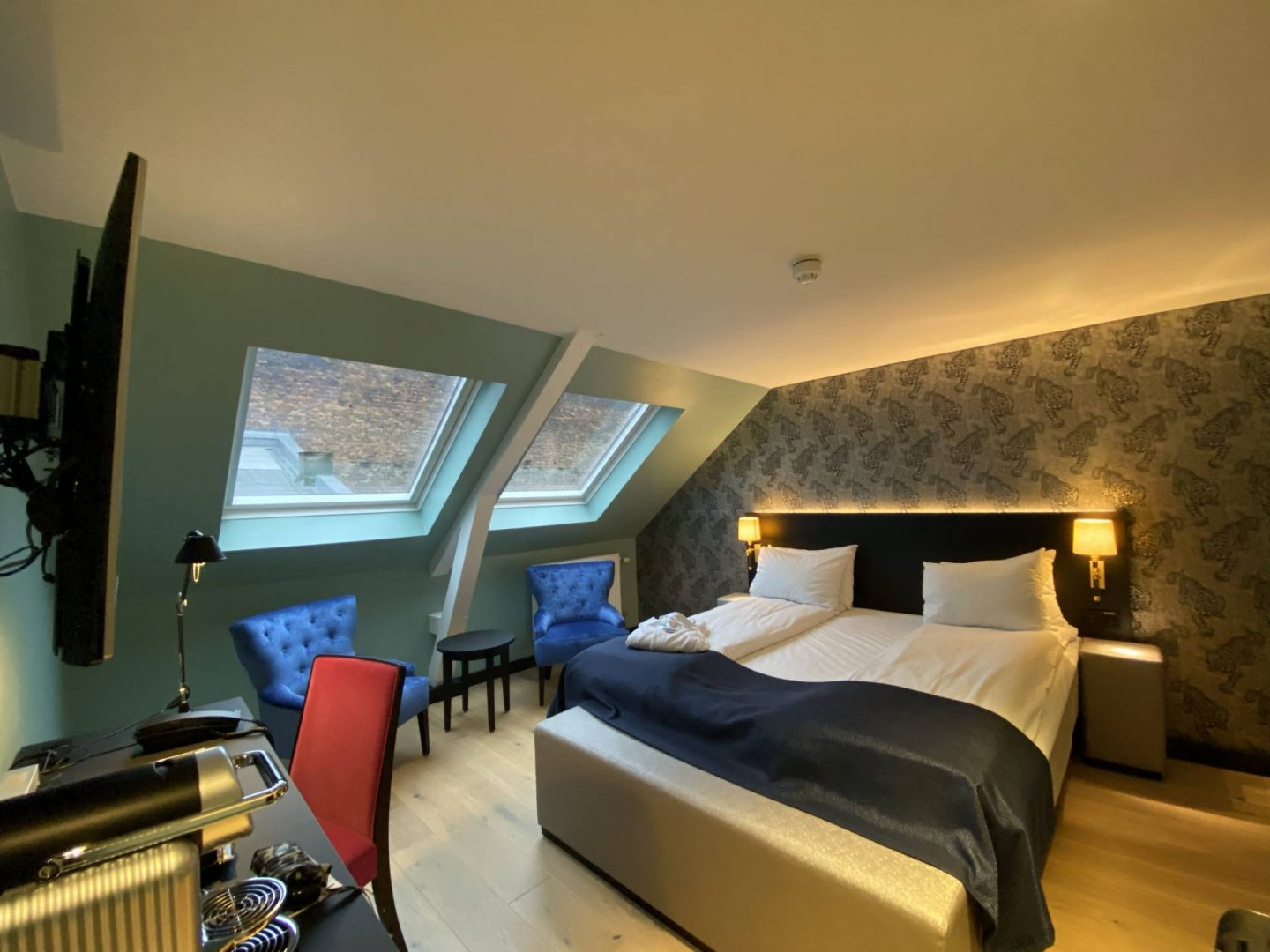 We stayed at the Thon Hotel Terminus which was right by the main station in Olso town centre which was great for dropping off our suitcases and heading straight into town.

From the outside the Thon Hotel gives off a slight Ibis style vibe, but oh lordy, it’s lush inside. The wallpaper, all picked by the owner’s wife, is out fo this world and I’ve legit got some bookmarked for when we move. 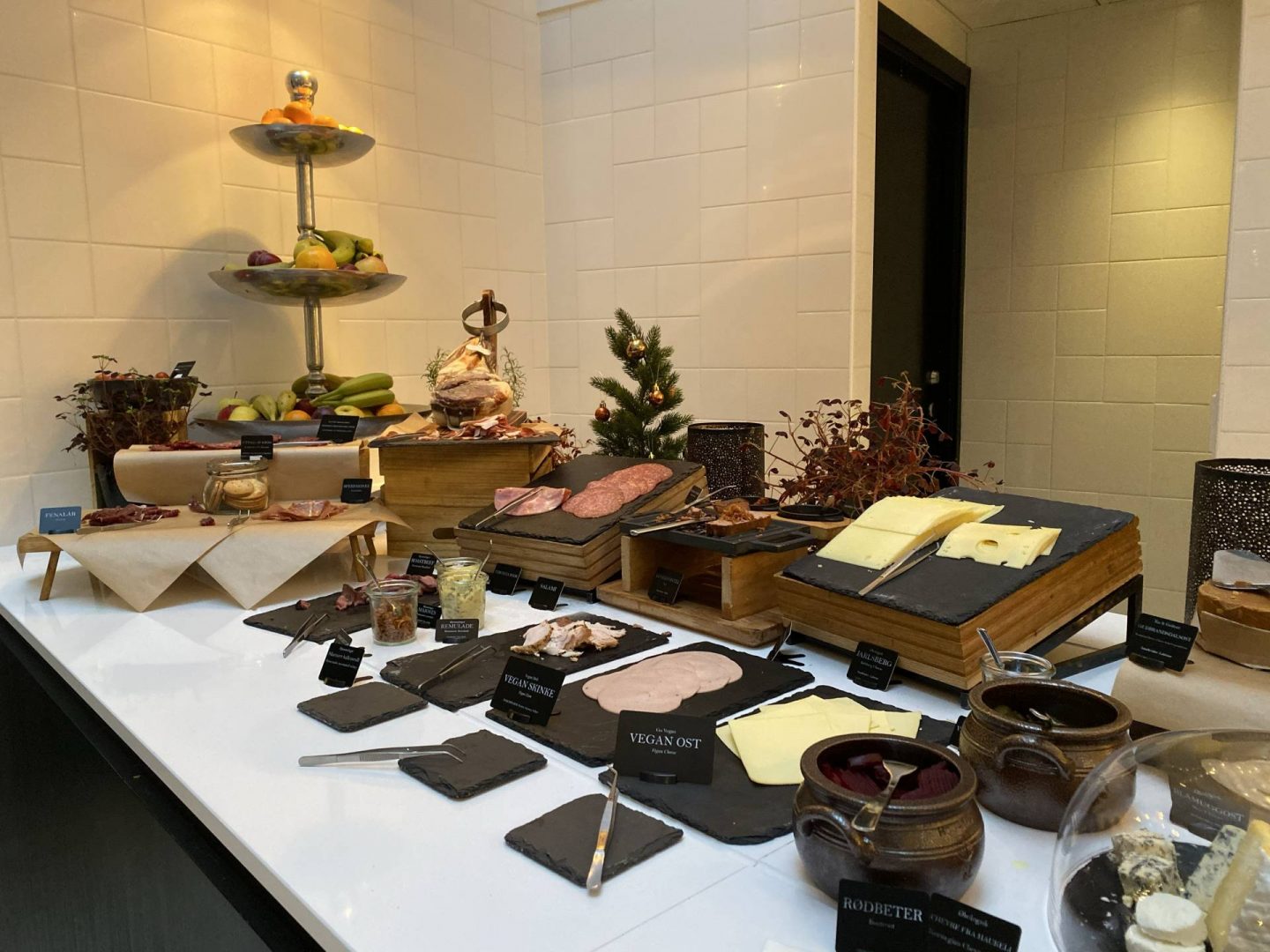 The breakfast was included in our room rate and this was one of the best breakfast we’ve had both in food options and the incredible staff that went above and beyond to make breakfast the best meal of the day. They even had vegan cheese and ham available within the continental selection plus plenty of veggie offerings on the hot food table. I even tried the famous Norwegian sweet cheese with pancakes and jam which was amazing as the cheese almost caramel-like, highly recommend.

There’s a lot of great things to do in Oslo, so much so that we didn’t actually get to do all of what was on our list! 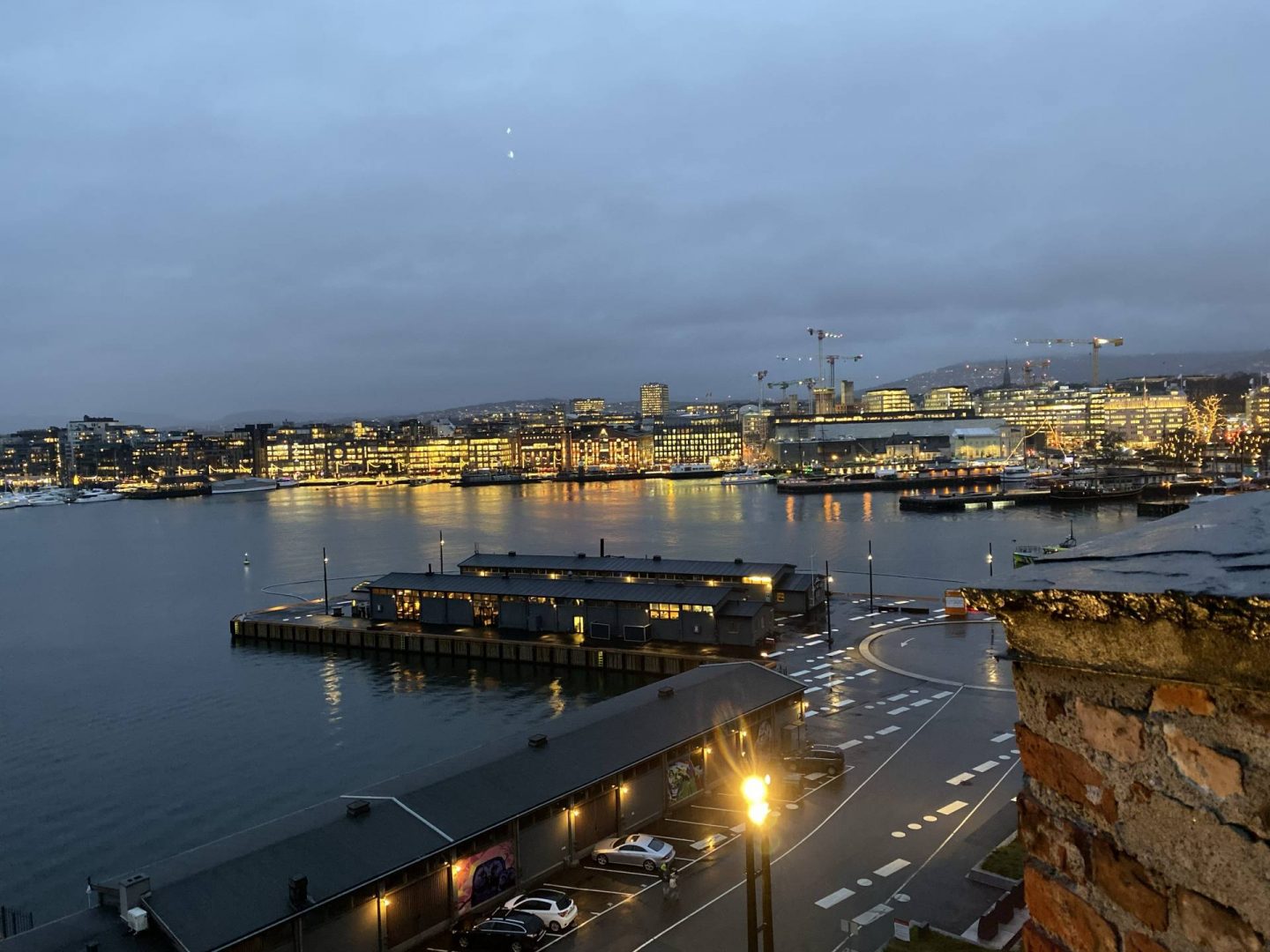 The Akershus Fortress was partially closed for our visit but the views over the Aker Brygge was stunning. It was also empty so it felt rather bizarre having an entire Fortress to ourselves.

We then took a stroll around the water to head over to the Aker Brygge. 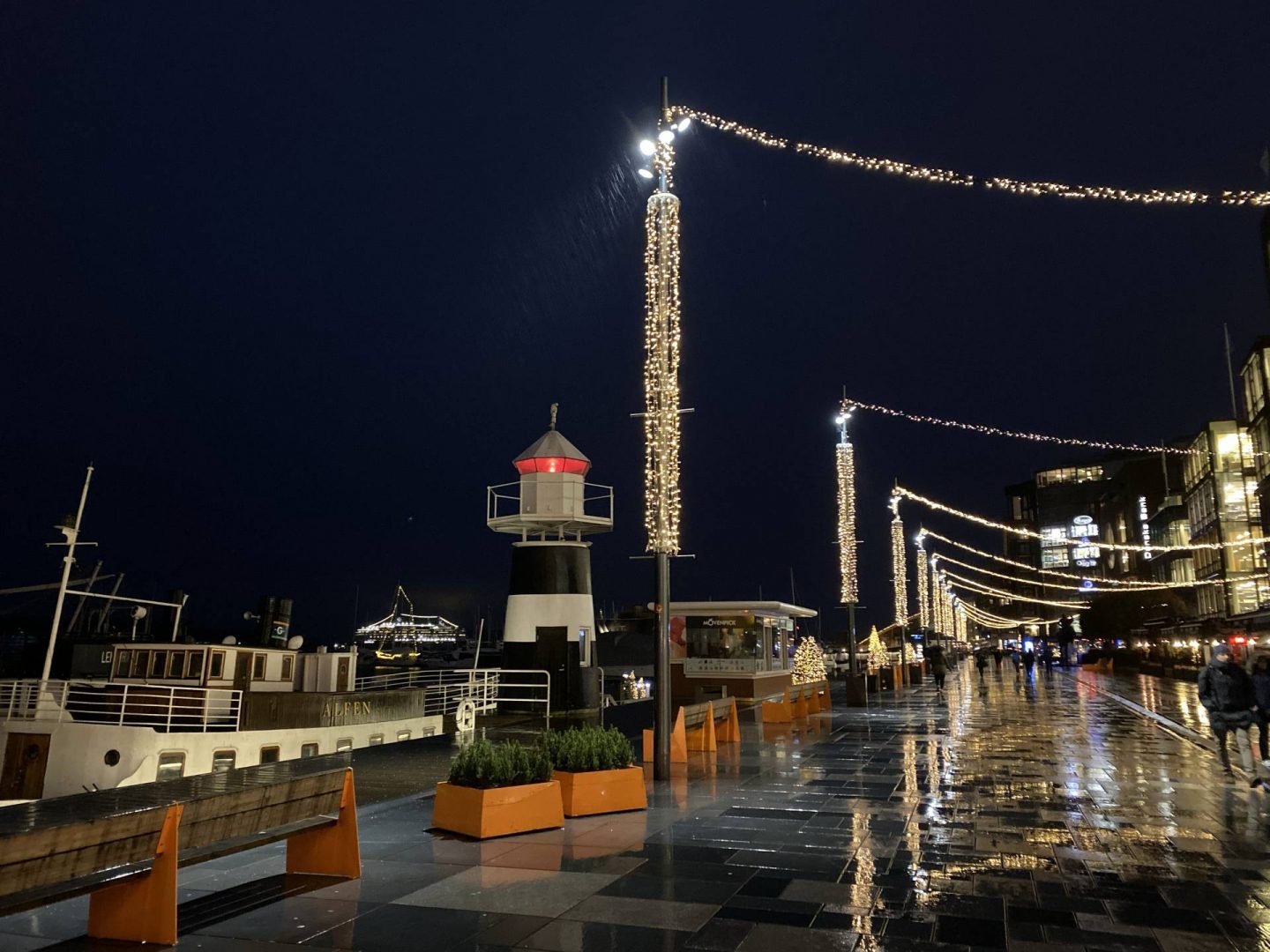 This was such a nice stroll, despite the rain and quite a nice way to see parts of the town whilst not rushing around as we had lots planned for the next day. It was also all lit up for Christmas and despite being a massive Scrooge, it looked super pretty.

Our second full day was spent hopping around as many museums as we could as we are quite the history nerds. We jumped on the bus and began at the Norwegian Museum of Cultural History.

This had to be one of my favourite museums of the trip, as it was an open-air space that is home to 160 historic buildings. We spent a good few hours wandering around the houses and buildings learning so much about Norway. Such an interesting history we never even touched on at school.

Our next stop was the Viking Ship Museum which shuts at 16:00, so don’t go too late as you do spend a lot of time standing and staring in awe! 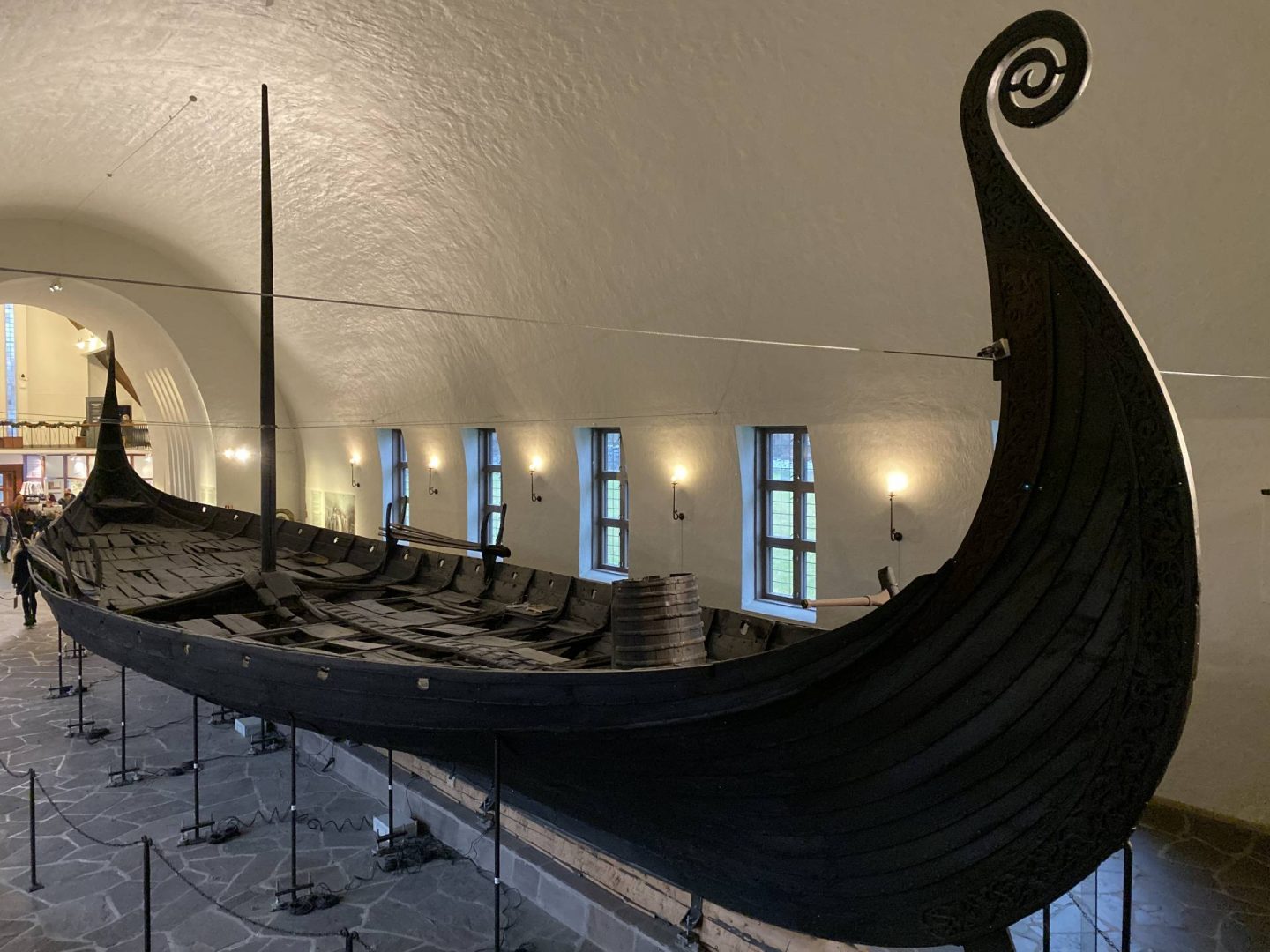 Entrance is 100 NOK each (around £7.50) and it’s beyond worth it. There are three REAL VIKING SHIPS; I lost my mind with excitement! There are also artefacts that have been found in and around the ships and these are mindblowing.

Our last stop of the day was the Fram Museum as this shuts at 5pm so we didn’t have to rush so much. 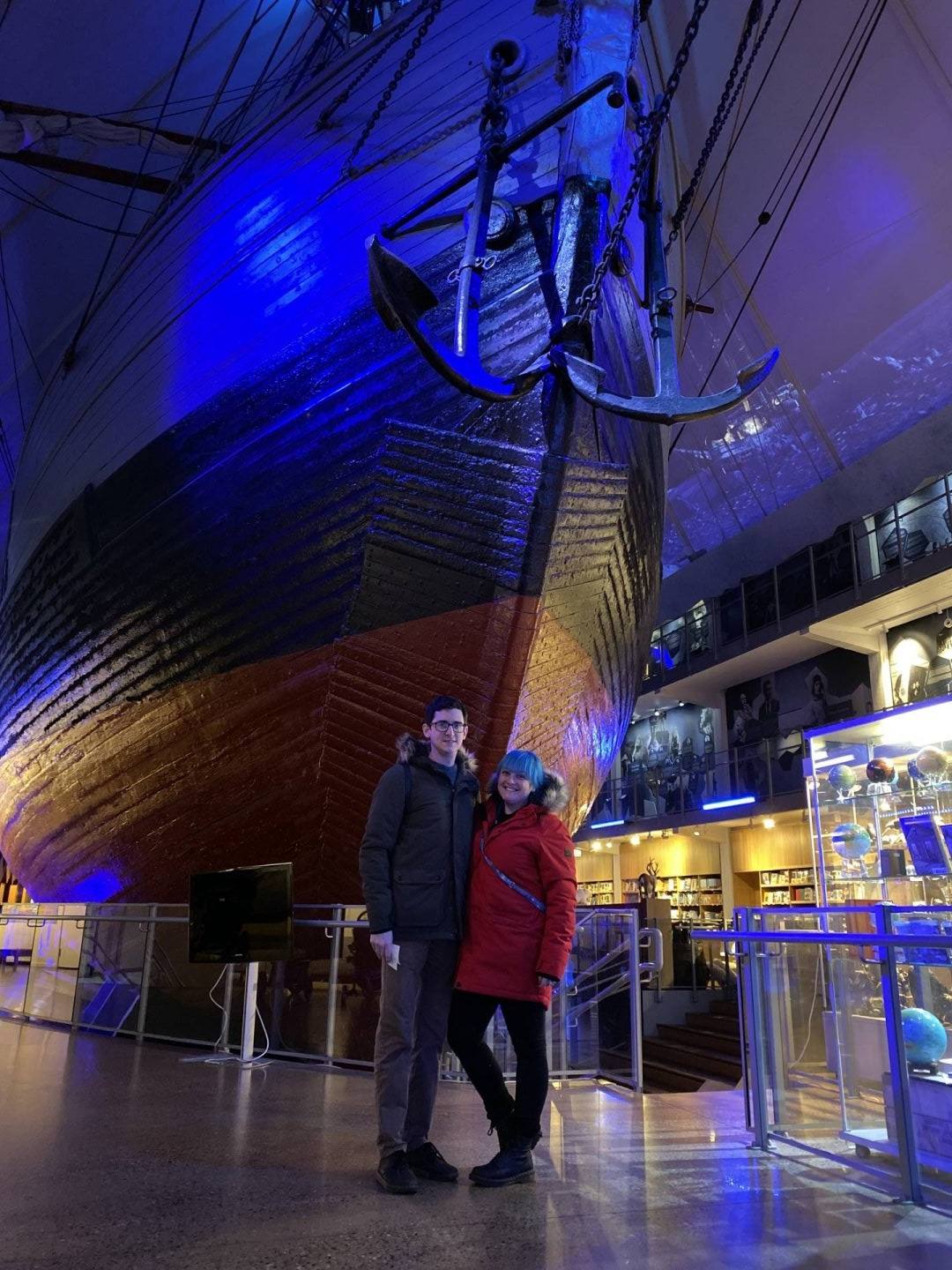 Entrance 120 NOK each (just over £9) and is all about the Polar Expeditions. I, again, didn’t know much about the first few Polar trips so it was really interesting to learn so much in such a short space of time. It was pretty darn cool being able to step on board the Polar Ship Fram to see who it looked during its expedition.

Other things to do that came highly recommended was the Frogner Park which shuts at 23:00 but we had lots of rains so we stopped to drink beer instead and the Nobel Peace Centre shuts at 18:00 with a free guided tour on Saturday & Sunday at 2pm included in the price of a ticket.

For a cheeky little beer stop, I recommend Rorbua on the Aker Brygge. 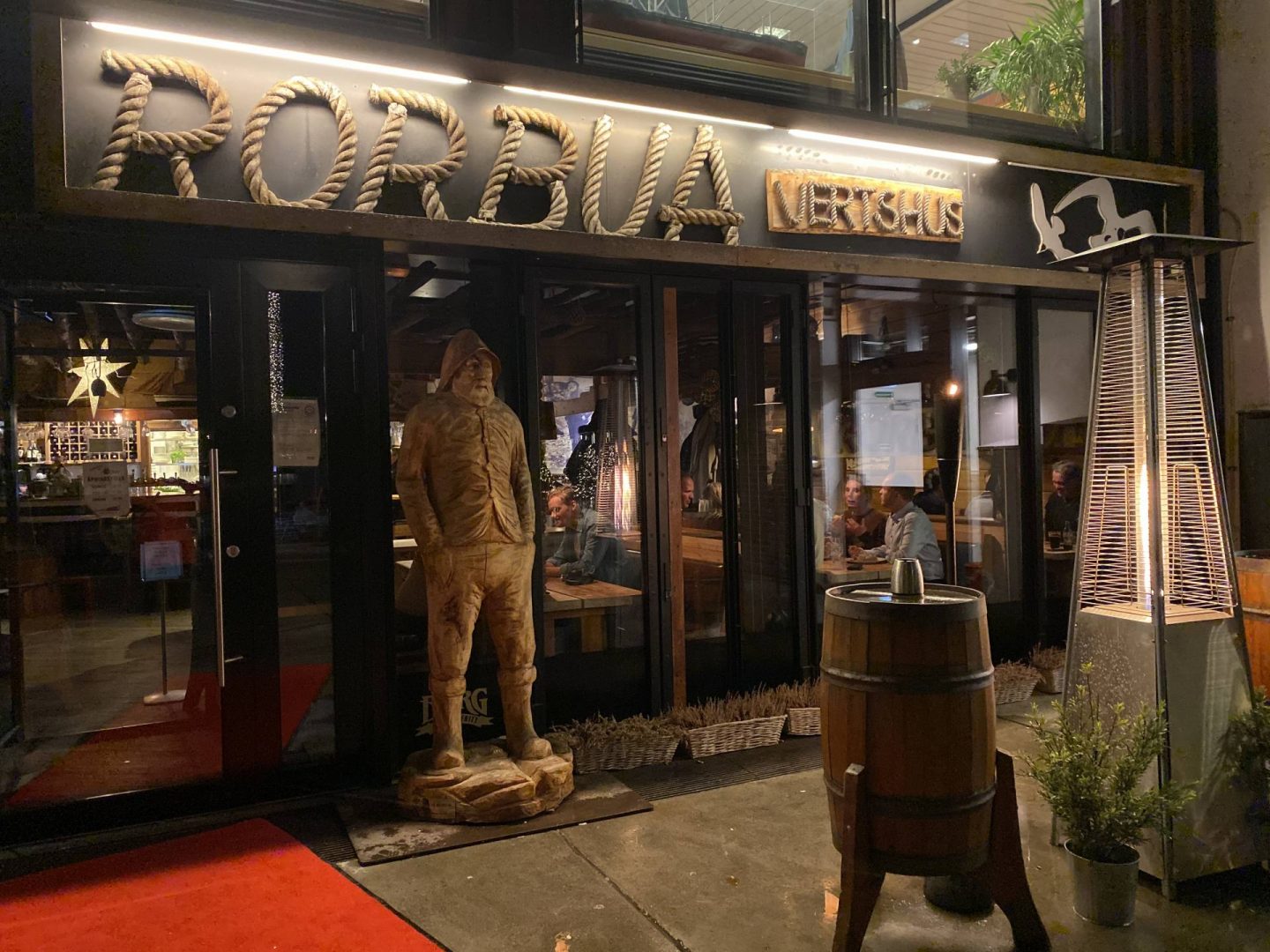 It felt really quite authentic with a lot of wood, a high bar and lots of big tables. The service was quick and chatty with a good amount of local beer on tap.

We sent for pre-dinner drinks at Tilt Bar which was 100% our vibe! 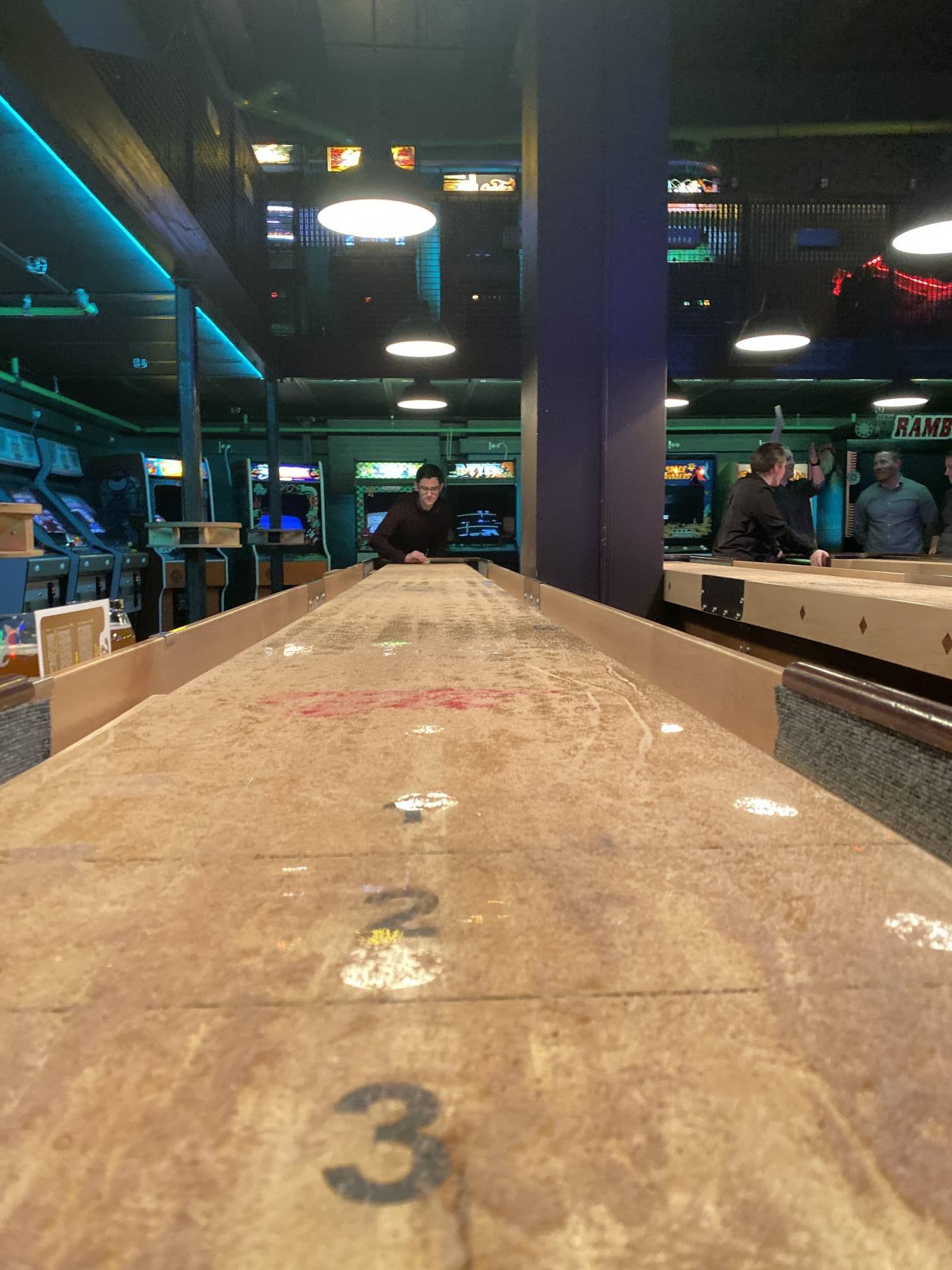 The ground floor is a very cool craft beer bar with so many beers on tap and then the deeper down you get, the more games you lay your eyes upon. We spent a good hour or two sipping great beers and playing shuffleboard, which I hate to admit, I’m awful at. I could have happily have spent a whole evening there gaming away.

Our dinner stop was the Døgnvill Burger Bar with a beer in their adjacent bar to start whilst we waited for a table. 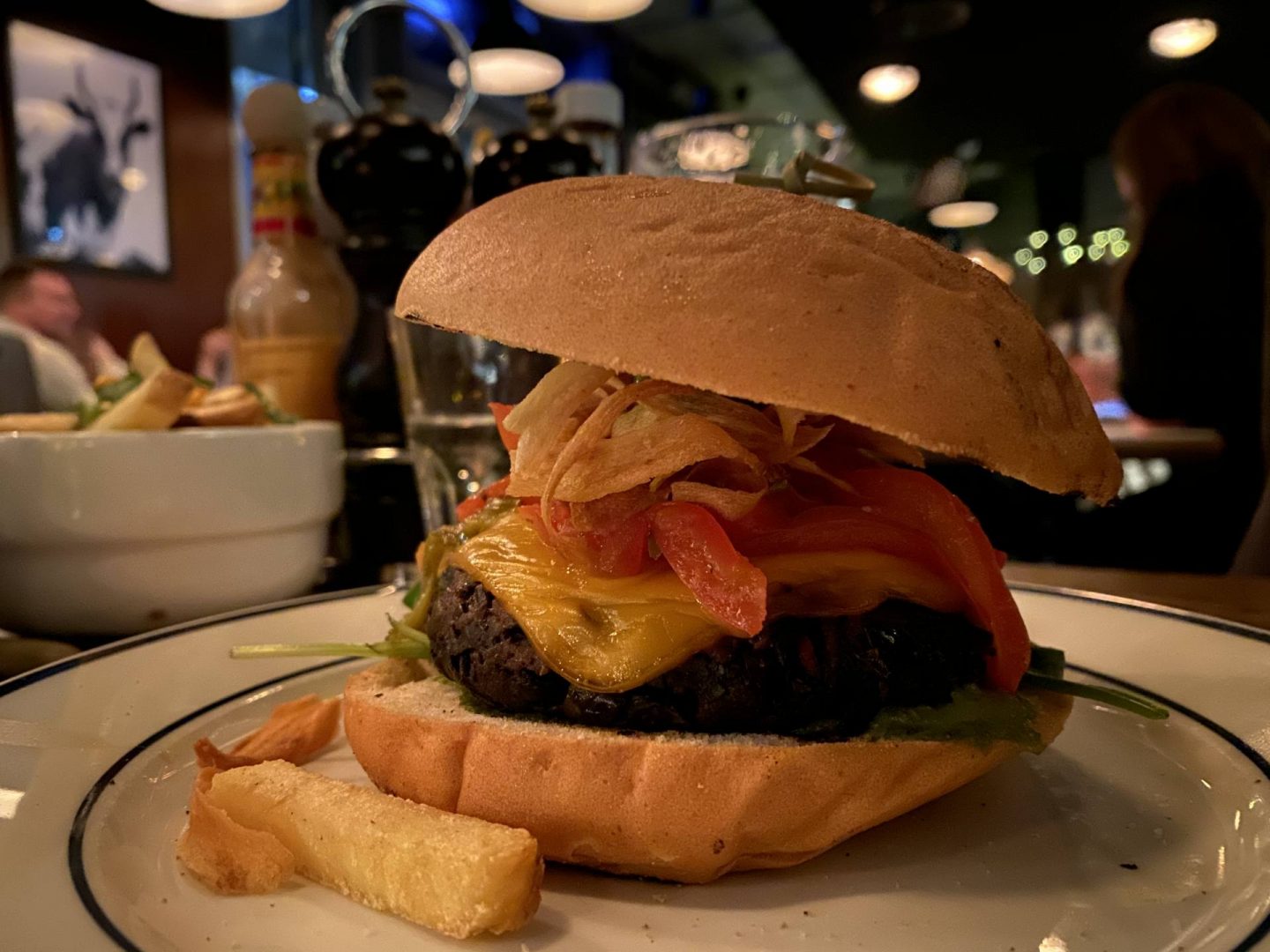 You know this girl can’t say no to a good veggie burger and a beer so this was the perfect pairing. I’d highly recommend the Vegan Viking filled with a burger made of smoked eggplant, beans, bell peppers, portobello mushrooms and garlic topped with tomato, fried green chilli, vegan cheese, parsley chips and spinach, along with a spinach, peanut butter and chipotle sauce; pretty banging if you ask me.

On our second night we had managed to book a pre-dinner cocktail or two at HIMKOK Storgata Destilleri; one of the top 20 bars in the world. 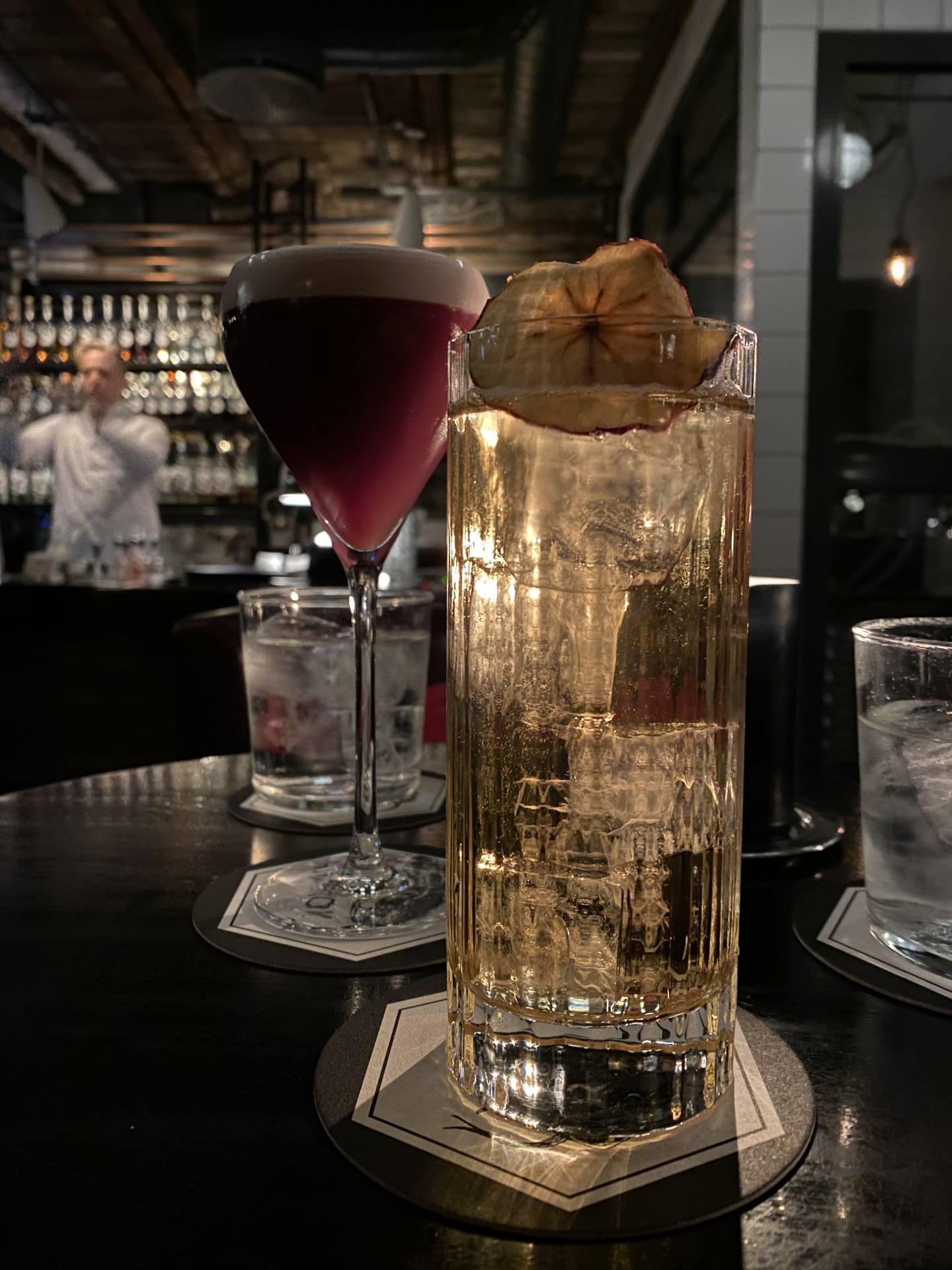 Following a science style vibe, there were cocktails that were like no other we have tasted before where 80% of the spirits are homemade. There are other bars in the building too that focus on cider and even a barbershop but do try to book as we saw many disappointed people trying to get tables. 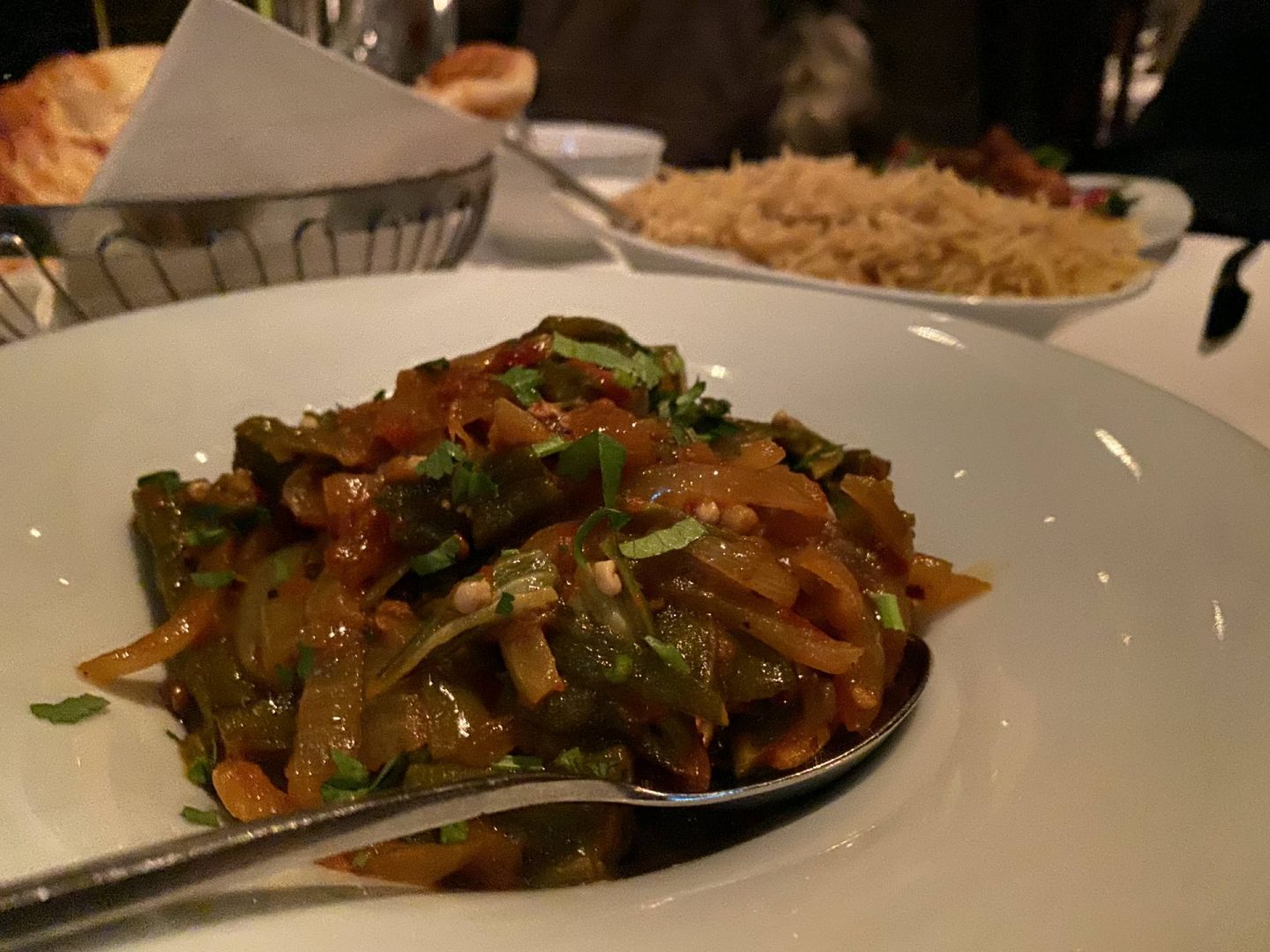 We had so many good flavours here and Pakistani food is incredible for vegetarians! I had the Okra prepared with onion, tomatoes and green chilli known as a Bhindi-Do-Piyaza which I’d eat time and time again. The service was second to none and when the owner found out I was there as part of my 30th Birthday celebrations she bought us out a huge exotic fruit platter with a sparkler! If I was a local, I’d visit here once a week if I could!

All of our food and drink options catered for vegetarians and most catered to a vegan diet.

We loved Olso, but it was time to move on to Flåm via a very special journey!

How To Plan The Ultimate Staycation *