Where to Find the Best Vegan Food in Korea *

*This is a collaboration with the Korean Tourism Organization.

When it comes to travel, I always like to check out food options before I arrive as I always worry that I will struggle with finding veggie or vegan food as I know some places can be less accommodating to the vast amount of options I’ve gotten used to living and working in and around London. Different cultures can have such an array of thoughts on being veggie and vegan and it can often be an issue trying to find a nutritious meal as a lot of places will just offer a veggie or vegan burger or even worse, just an avocado salad! Luckily, as there are plenty more people that are switching to plant-based diets it is stating to make vegan and vegetarian meals more available, which is a great relief when travelling to new places. 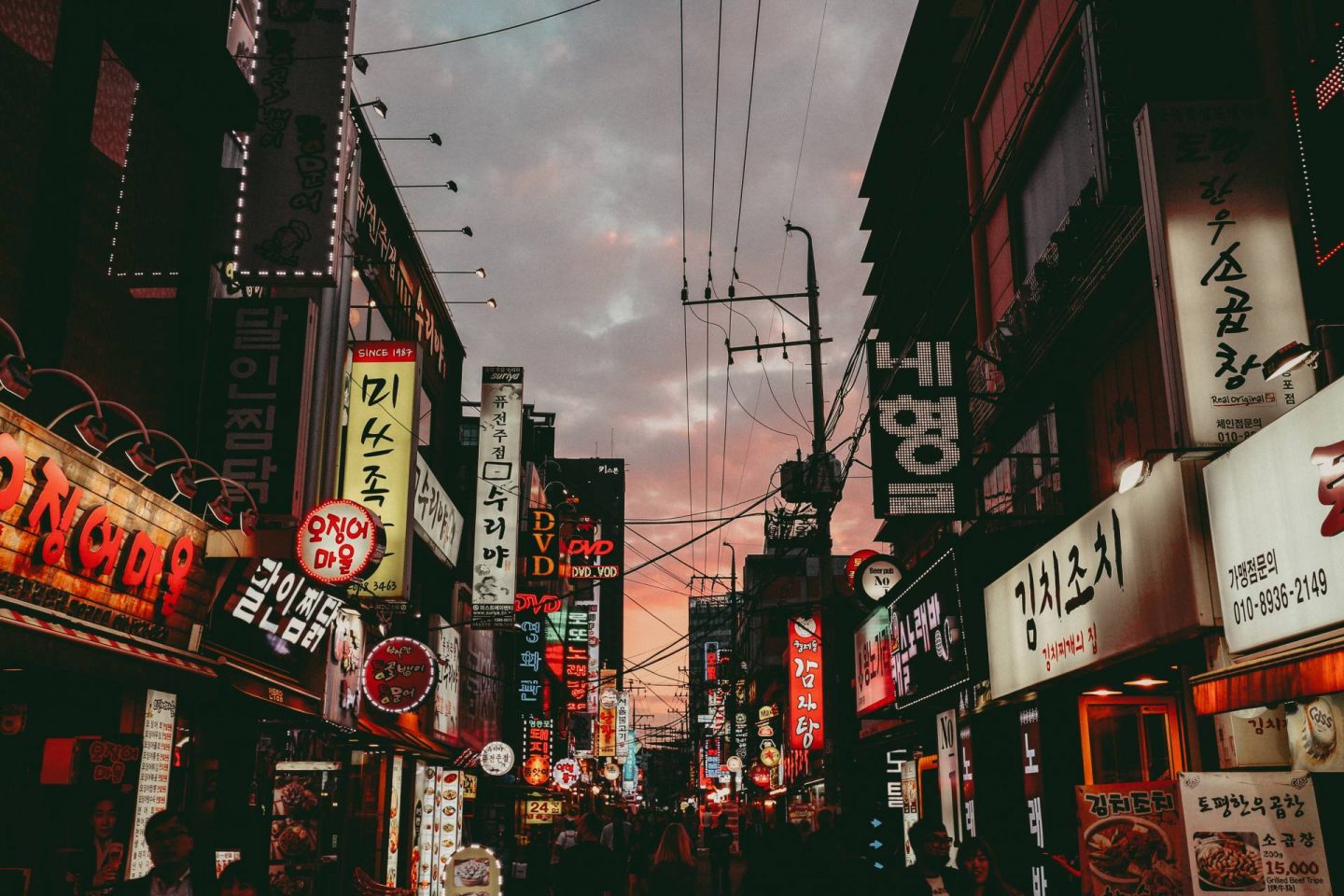 I’ve always enjoyed Korean food, and am excited to share more about it, aside from the typical Korean BBQ that we have all heard of, they are very accommodating of my dietary needs which are probably a little fussier than most! I eat no meat, no fish, no milk and no eggs so I’m pretty demanding, but stricter requirements like veganism is what really does tick my boxes when I’m on the road exploring new cultures and foods. This then led me into writing this very extensive post on how you can also grow to love Korean foods if you’re a vegan or a vegetarian also with compromising your beliefs!

In fact, my boyfriend’s brother makes an incredible vegan version of a Korean burger that he loved so I will be trying to recreate that at home so I can enjoy the food of Korea at home as well as when we travel too.

Here are a few of the most popular options that you’re likely to be able to find all over Korea: 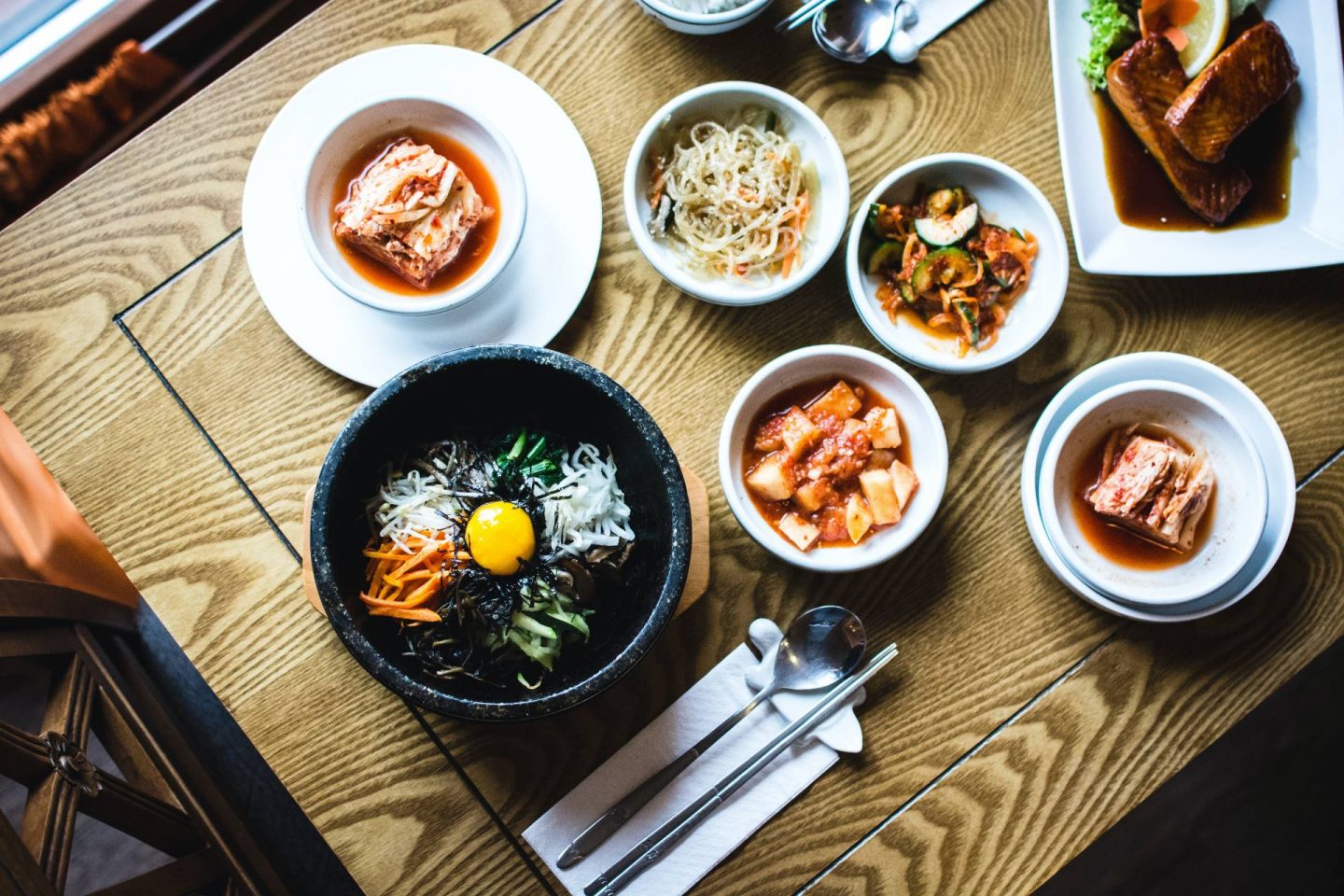 In South Korea, the areas of Jeonju, Jinju, and Tongyeong are really well known for their variation of bibimbap, a classic mixed rice dish. The name bibimbap literally “bibim” mixing various ingredients with “bap” meaning the rice! Bibimbap is usually a warm white rice bowl then you have a selection of toppings from namul which is sautéed and seasoned vegetables or kimchi which is traditional fermented vegetables and gochujang and chilli pepper paste or soy sauce, or doenjang, a fermented soybean paste; there’s lots of wonderful options! It can often be topped with egg or meats but I have some help for that a little further down the page!

Tip: Just remember to ask them to remove the egg or beef on top to make this dish perfectly vegan.

Fact: In 2011, bibimbap was listed at number 40 on the World’s 50 most delicious foods in CNN Travel’s reader poll!

This is one of the most popular street food dishes in Korea, so it’s a must-try when you’re there! They are stir-fried rice cakes, but not the type of rice cakes we buy in a packed from the snack aisle in the supermarket. The gungjung tteokbokki are filled with history, the newer spicy tteokbokki has a relatively short history after it became popular at the end of the Korean War and the chewy rice cake in the spicy gungjang sauce instantly became popular as an affordable comfort snack.

Tip: They are made vegan friendly but do check what is in the sauce as this can change from place to place.

Yet another popular Korean street food, also known as Hoddeok, these filled pancakes are vegan without even trying! The dough is made from flour, water, and yeast and are usually filled with chopped nuts or seeds, sugar, and cinnamon, then they are fried until crispy on the outside and softly caramelised on the inside.

Tip: Hotteok is most popularly eaten during the winter season.

Fact: You can buy these from street stalls, but the mix is also available in supermarkets.

If you love a mix of sweet and savoury, then you need to try the Japchae, a stir-fried glass noodle dish with vegetables. Despite this usually being a side dish, it can be also be ordered as a main dish which is a total win as glass noodles are delicious!

Tip: If you would like you Japchae to be served on a bed of rice then order the japchae-bap.

Fact: Japchae was once a Royal dish and is now often served on special occasions.

Where to Find Vegan Friendly Korean Dishes in Seoul, Korea

Before embarking on a trip I always pick a good few restaurants with menu’s that are suitable for my dietary needs, so here’s a great few that offer vegan dishes or are totally plant-based which is even better!

This is one of the top-rated restaurants in Seoul for vegan food according to my fav food app, Happy Cow! I mean, there’s a review stating that one gentleman went three times during his nine-days stay in Seoul and if that’s not a reason to visit then I don’t know what is!

Known for being a traditional Korean restaurant and very good value for money with joyful staff.

Plant is 100% vegan as all ingredients are plant-based.

The food here is less traditionally Korean and has more of a European feel to the menu as they offer salads, wraps, sandwiches, veggie burgers, lentil bowls, and pasta as opposed to rice and noodle dishes. If, like me, you love to take a foodie photo for the ‘gram then their colourful dishes will not disappoint at all. The Biryani Garden Bowl, the meatball sandwich or the Tempeh Rainbow Wrap should be top of your list to try.

This restaurant is a vegetarian restaurant but the owner is happy to make vegan opinions when requested.

Each meal is freshly prepared and is filled with flavour. The dishes are known to very large, great value for money and you do often have to wait for a table during their busier hours, which I take a really good sign. The fried dumplings, cold noodles and tofu stew all come highly recommended.

Just be warned, they are closed of a Saturday.

Oh Se Gae Hyang is owned by a week-known Korean company called Vegifood and had a mix of Korean and Chinese foods. All food served here is vegan and they also use no garlic or green onions in their cooking.

As a vegan, it’s a great way to get an impression of Korean food as all of their food is very traditional dishes but with full vegan ingredients. A lot of reviews state the service isn’t the best, but the food is worth it!

If you are looking for somewhere where the staff speak a little English to get you into the way Korean vegan works, then this should be top of your list.

The lunch menu offering comes with a variety of plates and has very high reviews of being good quality, reasonably priced and in a really nice setting. The menu is predominately temple-style food which comes from the Buddhist temples of Korea so will be different to a lot of the street food style offerings.

Balwoo Gongyang is another temple-style restaurant offering a set menu although extra dishes can be ordered. They are the proud owners of a Michelin Star so this one to visit for a little more upmarket dining. Each table is seated within it’s own private space so this is a really intimate style of eating.

They are known for using the freshest of ingredients which really adds to the flavours within the dishes and for the calibre of food they offer the menu’s seem really good value; around £20 for lunch and under £35 for dinner.

Despite Loving Hut being an international chain of vegan restaurants inspired by Supreme Master Ching Hai, this is still a great vegan option whilst in Seoul. Each Loving Hut offers a different menu and this one includes vegan pizza, soy burgers, fried dumplings, tomato pasta, fried soy ‘chicken’, soy ‘cutlet’, fried rice as well as a selection of Korean stews.

The service is highly spoken of as is their store where you’re about to buy vegan ‘meats’ and instant noodles to take away.

I can’t create a list without ending on a sweet treat; the Haemil Bakery offers bread, cakes and even pizzas! The owner is always on-site and is more than happy to chat away to customers about his breads.

Tips for Being Vegan in Korea 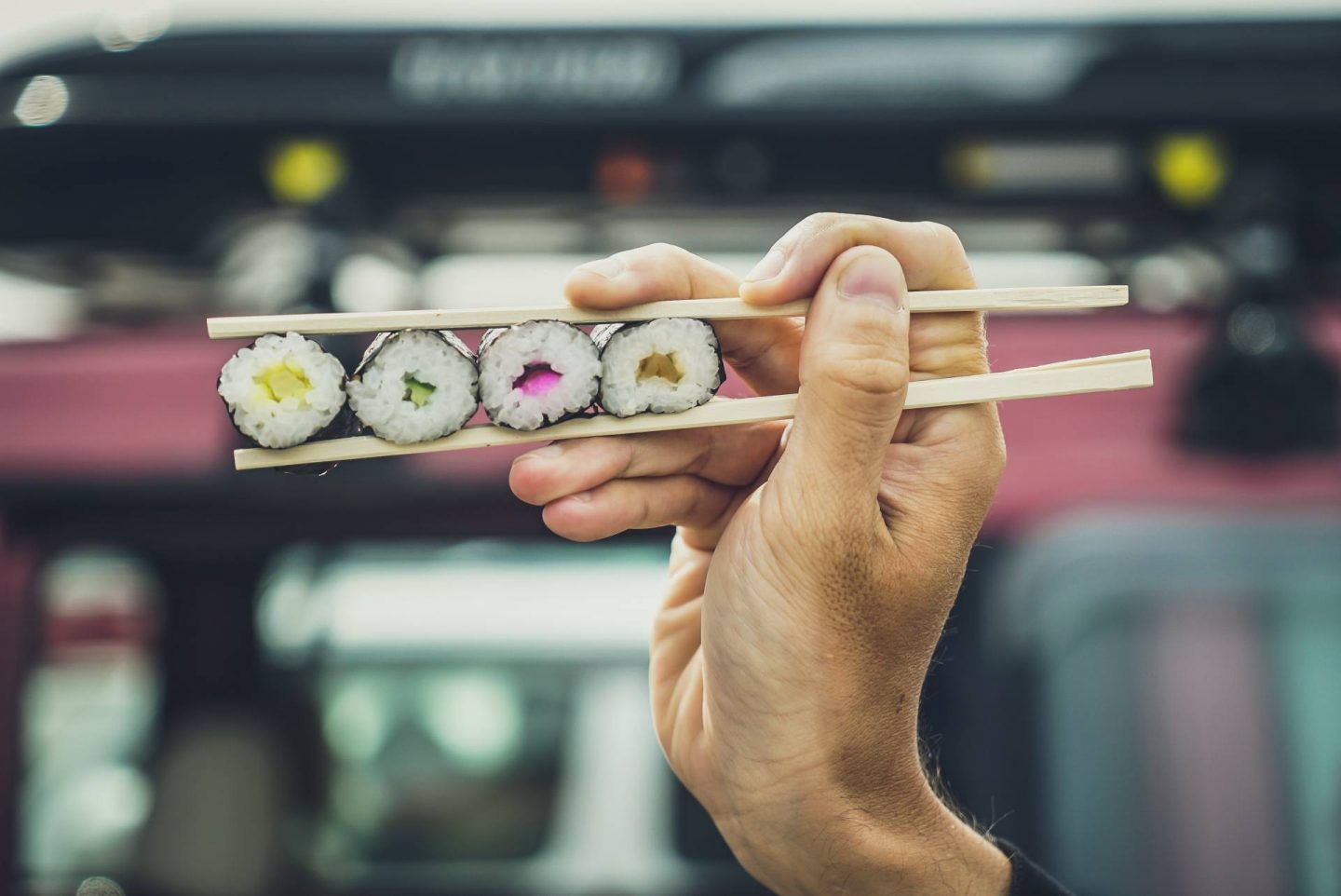 Be Strict with what you Can and Can’t Eat

With veganism growing in Korea, you need to make sure the waiters taking your orders understands what it that you’re asking for. You want them to be aware that you don’t want eggs, meat or fish.

As above, make sure you keep these phrases to hand so you get what you actually want and maybe practice them a few times before you need to use them so you’ve got it nailed!

From the dishes I spoke of above, find one that you really enjoy and make this your go-to so you always have something to look for when you visit any new restaurant and maybe aren’t sure of what you can order unless you’re in a totally vegan restaurant of course.

Always Check the Side Dishes

One of the go-to dishes I mentioned above, the Japchae is a well-known side dish and this a totally vegan option. If the restaurant you visit doesn’t have a main course that’s vegan friendly then a side of Japchae could always be requested as a main course. The same can be said of any side dishes that are vegan, it’s a fail-safe option!

Kimbap, Korean Sushi, is the best for a Quick Snack

Kimbap, also known as gimbap, is made from cooked rice and other ingredients that are rolled in him which are dried sheets of seaweed and is bite-size. It’s usually vegan and can be picked up from convenience stores, supermarkets, and sushi stores. It will often be wrapped in foil so it’s a great snack for if you’re on the go or need something to pop in your bag for a picnic!

There are so many great meal options and restaurants that offer vegan food that I’ve not mentioned so Korea really does have way more on offer than you may think as veganism has really taken the country by storm.

Things to think about When Planning a…

Things to Do in Blackpool…