Exploring Modern Cider; A Cider Tasting at The Hop Inn

Growing up, I always thought that cider was best drunk during the summer months at a music festival but since becoming a regular at The Hop Inn, I have learnt that not all cider is drunk warm! Plus, there’s far more to it than the mainstream names you could all list off.

Joining my good pal, Natalie, we embarked on a modern cider journey through a tasting at our favourite place to be on a Monday night; The Hop Inn, Hornchurch. Come along for the ride…. 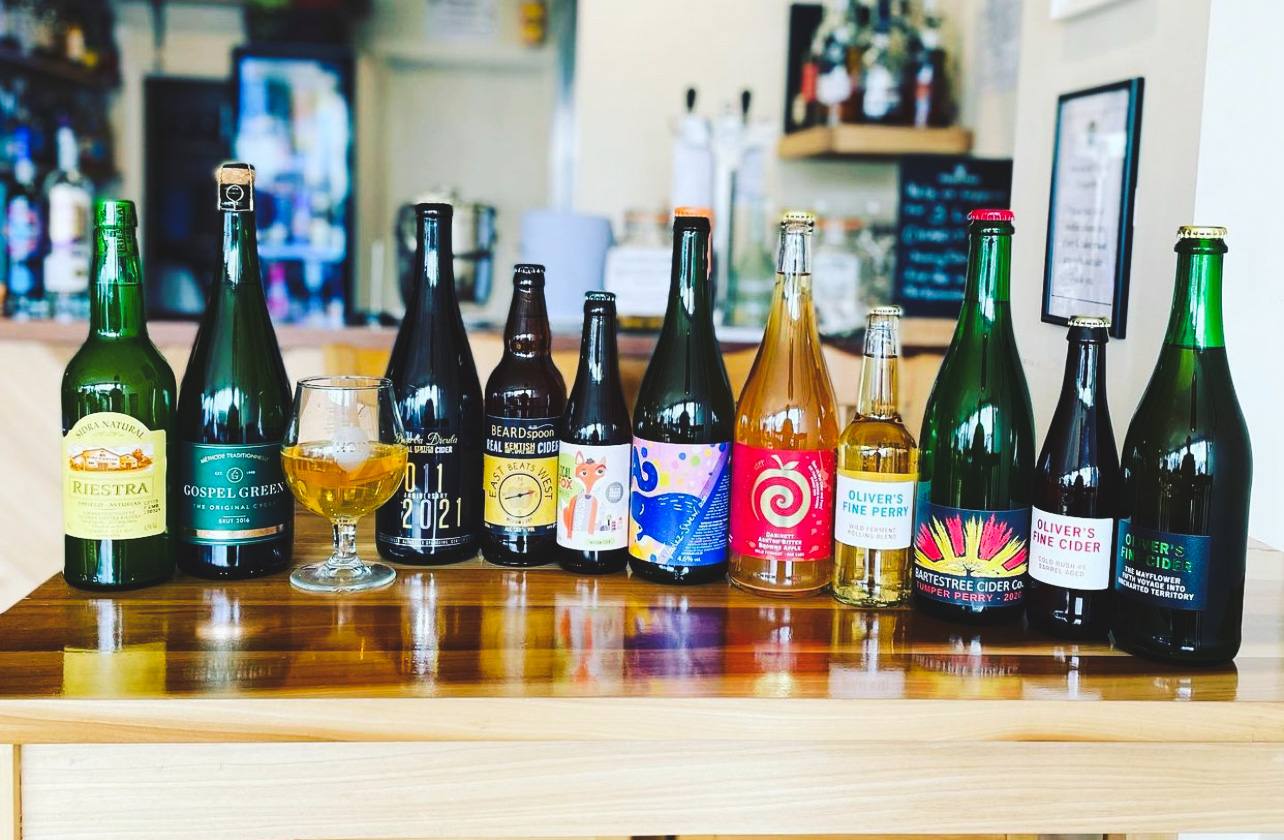 This was a totally new style of cider for me – the Sidra from Spain. Best served with a traditional long pour after being shaken to awake the flavours! I did try my hand at the long pour, and yes, I did manage to get most of it on the floor!

This Sidra was fairly acidic but delicious none the less!

If you know me, you’ll know I’m already a fan of Gospel Green! With a stunning golden colour and made in the style of traditional champagne, this is one sparking cider that really does rise to every occasion. The Brut Champagne Cider was originally created in 1990 so it’s almost as old as I am, and it’s still made in the same way today.

Gospel Green only use the finest cooking and desert apples from the Blackmoor Estate in Hampshire and they’re all hand picked to minimise damage.

This wonderful cider is naturally yeasty, and just so very easy to drink. I’ve ordered it a few times since the tasting which shows I was a genuine fan! KC Tribute is a special blend of 3 strong apple flavours in recognition of Ashford’s long-gone Cider maker Ashford Valley Cyders and I’m sure they’d be chuffed if they ever got to try.

BEARDspoon produce their cider not for profit but for the enjoyment of others and to spread the word about Real Cider which is rather wholesome. We could tell the love that went into every bottle as the lovely two man BEARDspoon team were there at the event talking passionately about what they do.

Another from the lovely lads of BEARDspoon was Barba Dicula, their 10th Anniversary special!

A blend of Russet, Red Devil, Bramley & Michelin and created using the same method as Champagne, then topped up with a 7 month matured sweet chestnut barrel blend; this is a simply divine bottle of cider! Almost too good for sharing!

Four Classic Kentish cooking and eating apples have been blended with two Sussex grown traditional West Country Cider Apples to create a more complex and earthy cider that is just smooth and easy to drink! The flavours were very clean and with the small amount of white granulated sugar they use in the creation, it’s every so slightly sweet.

I actually voted this as one of my highest scores of the evening, so if you can ever get your hands on a bottle, I’d highly recommend.

You can’t really get much more wholesome than Local Fox when it comes to cider; being part of The Orchard Project, who are the only national charity dedicated to the creation, restoration and celebration of community orchards, means that this cider gives back. The Orchard Project plants new orchards and keep check on veteran orchards for any care they need, and by doing this, they encourage community, build homes for insects and educate the locals; what a win!

Local Fox cider is made from 100% rescued fruit, otherwise destined for compost. They press the apples in small batches, using the traditional rack-and-cloth method, with the juice naturally fermenting over winter. All of the profits are channelled back into buying tools and providing training for community orchards!

If witty branding is your thing, then this is 100% a brand you need to get on board with; just look at the name! Artistraw are also pretty darn wholesome; with their drinks being natural, unfiltered, unpasteurised, and wild fermented with pure juice cider.

Pressed back in November 2022, the Voulez-Shrew (AHA) is popping with tropical fruit flavours from mango to lychee and it’s legit so summery! Packed with 4 varieties of apples, this is a bold and juicy cider that packs a punch.

When most people think of cider, I’m guessing they’ll think of Somerset and ‘proper farmer cider’ – pretty much Hecks’ SV Browns Apple in one! And what makes it even better is that the Hecks family have been making traditional farmhouse cider for six generations, since 1841!

The SV Browns Apple was pretty peachy in colour and, for me, certainly tasted a lot better than it smells (I am a funny one for smells!). This is a single variety cider and it’s quite sweet and smooth to start with, but then the dryness kicks in to give it a beautiful finish.

This Dabinett from Ross on Wye is also a single variety cider made with Browns Apples, yet it tasted so different to the Hecks with hints of spice and almost a woody after taste.

Winners of the 2019 BBC Food & Farming Awards ‘Best Drinks Producer’, the Johnson family, have been pressing cider at Broome Farm since the 1930s. They keep all of their methods as they always have been, paying a testament to their previous generations.

If you’re looking for a wealth of summery flavours such as rhubarb and gooseberry, hints of melon and elderflower, then you may want to get your hands on some of the Wild Ferment; Rolling Blend from Oliver’s. It’s been rumoured that this is a great example of what Perry should really taste like.

Being called ‘Rolling Blend’ gives this cider a chance to change over seasons as Tom (Mr. Oliver himself) seeks to blend the best fermented pears juices that he can get his hands on at the time to get perfect flavours.

Another peary good delight we were treated to that fine Monday evening was the SV Tumper Perry from Bartestree made entirely from hand-picked pears, of the critically-rare Tumper variety. Told you it was a treat!

This one caught me unawares as there was, for me, very little on the nose, but the flavours powered through as you drunk the cloudy, slighty acidic perry. There was also a slightly sherberty finish which a nice surprise too.

Moving away from perry, and heading back over to Oliver’s for some cider, we were graced with the only one from this list of 13 ciders that I’d drunk previously; the Gold Rush #9 Barrel Aged cider. Which, as you can likely tell from the name, is the ninth version of this barrel aged series.

With a deep burnished orange amber colour, but then almost rosè in the light, with a slight carbonation, this cider won my favourite of the night (marginally!). It’s rich & spicy and just delicious.

This one is actually a great accompaniment to food, which is something I would never have thought about cider in general before this event.

Our final taster of the evening went down a storm and is 100% something you need to try if you like something a little different.

The Fifth Voyage into Uncharted Territory is a fruity apple cider with a very slight spice. It’s rather full bodied, as far as ciders go, which comes of a mixed result from the barrel ageing and the partially fermented ice cider. What a great cider to end the night on!

Share:
PREVIOUS POST
"Signature Pieces for Your Fashion Collection: What to Invest In *"
NEXT POST
"The 2022 World Beer Cup Winners and Fun Facts"
0 comments so far.