I was very kindly invited to create Russian Dumplings in return for a review through Love Pop Ups London.  However, as always, all opinions are entirely my own.

I’m a big fan of Airbnb; I enjoying how living in someone’s home can you make you feel like you’re so much more involved in the countries culture and how it can often cost lest that staying in a generic hotel. Well, Airbnb have recently taken that one step further and introduced Experiences. These are activities designed and led by inspiring locals meaning you can go beyond typical tours or classes by immersing yourself in each host’s unique world. You don’t have to have a room listed on there to offer an Experience either.

When I was invited along to ‘Make Russian Dumplings with a Chef’ in the form of Alla’s Yummy Food in South London, I was ready to take on my first Airbnb Experience. Signing up on Airbnb, as you would booking a place to stay, you’re given the exact location after booking. We were heading to Stockwell, a part of London I had never been to and I did get rather lost following Google Maps trying to find the location but that’s quite typical of me! 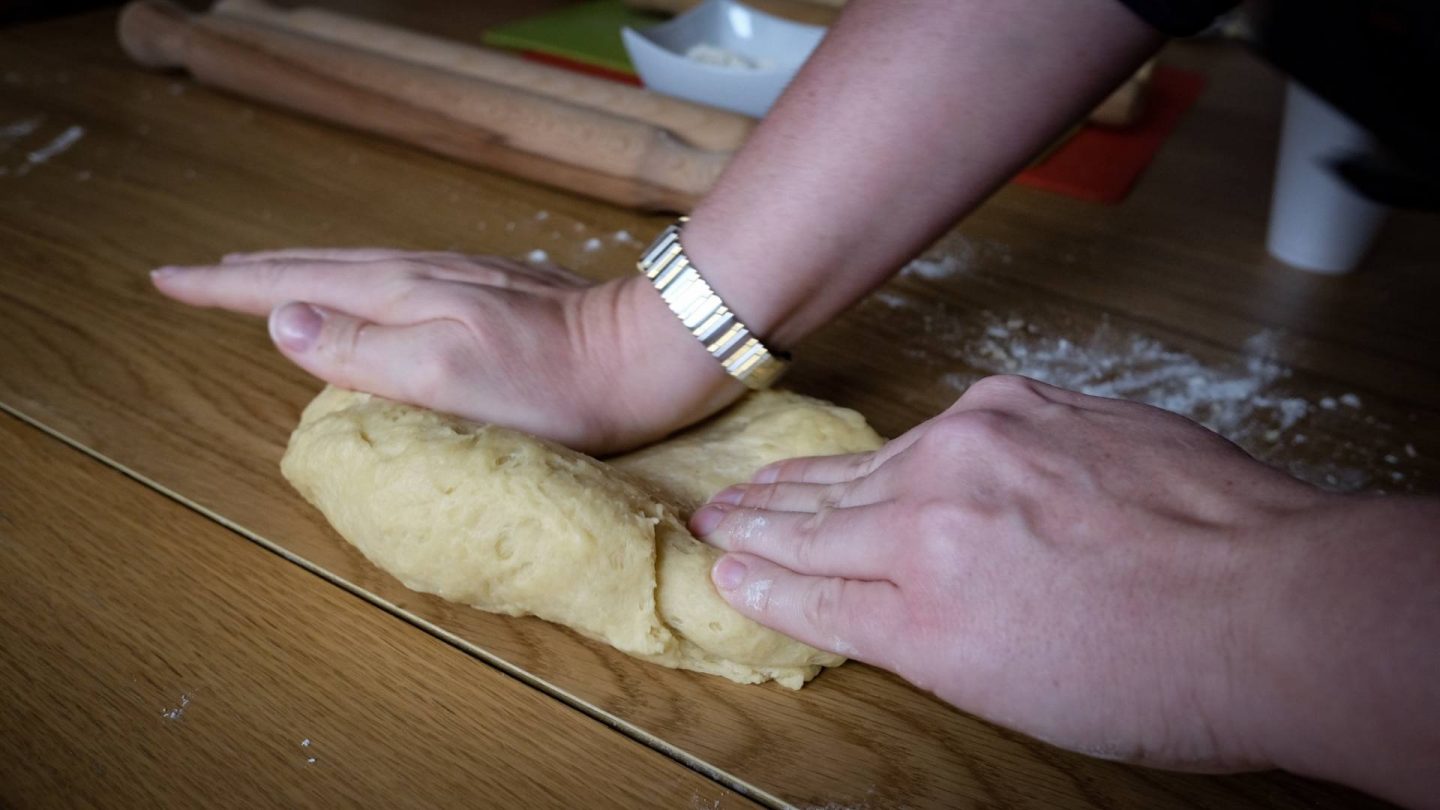 Upon arrival, we were warmly welcomed by Alla and her lovely French Bulldog, Milo. We grabbed a drink and chatted amongst ourselves until we were ready to kick off our cookery class. I’ve eaten plenty of dumplings in my time but never Russian ones so it was exciting to be actually making them as my first tasting!

I paired up with Katie, and we claimed a work station. To make our dough, our plain flour and salt was measured into a bowl in front of us as was the melted butter and water. We combined the egg with the other liquids and then stirred into the flour mix. When we were happy with the consistency we got our hands in and ensure everything was mixed nicely.

We then kneed out the dough between us for almost 10 minutes which was tough work! If you have a Kitchen Aid, or the like, you can actually kneed the dough in there which is a lot easier! 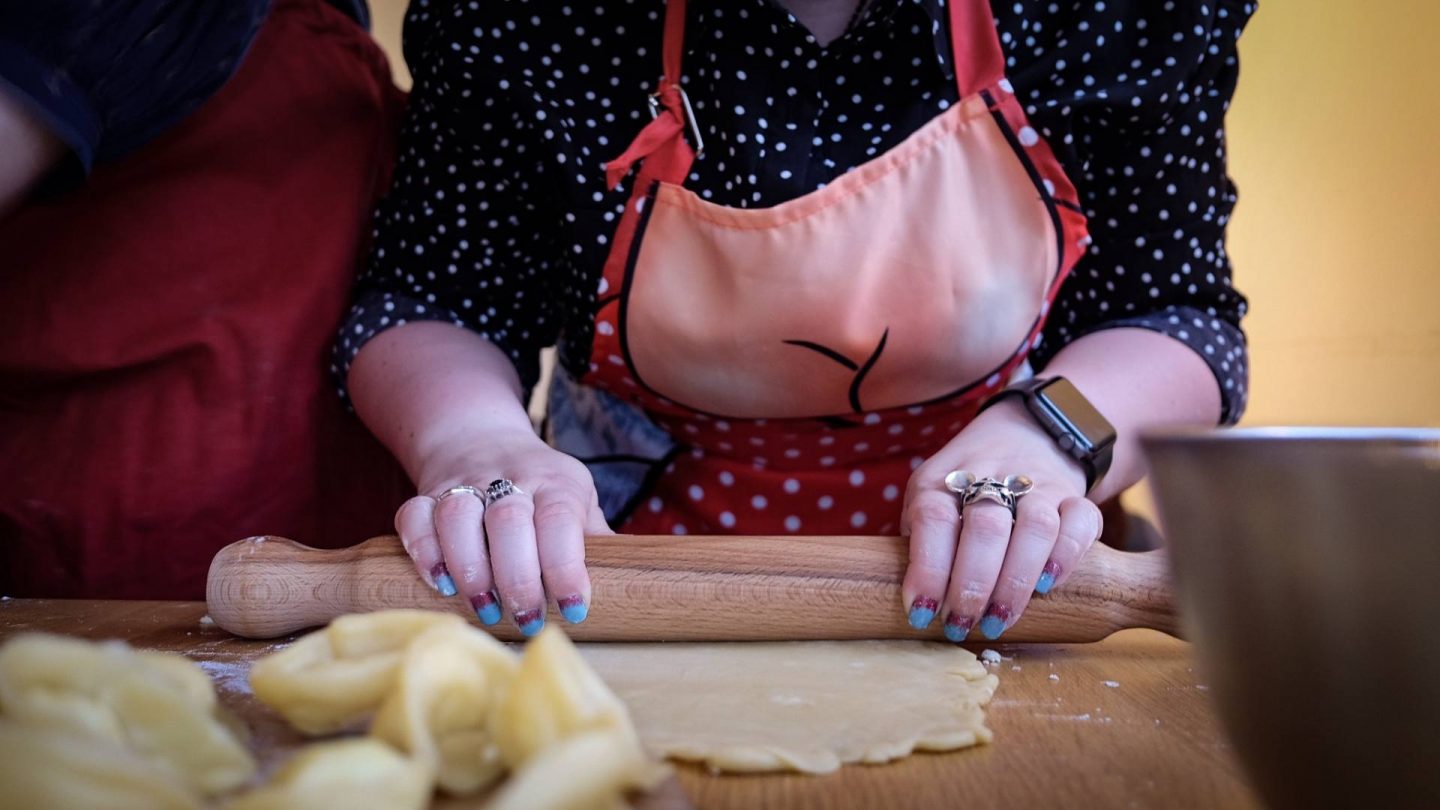 After leaving our dough to rest, we then split the dough up and rolled the dough out. I’m rubbish at this kind of thing, but it was a great laugh!

After rolling the dough out, we cut it into small circles and were ready to load up with our fillings. Our host, Alla, had picked pork and cheese which I was really interested in trying. I’m not a huge pork eater but I love cheese so I instantly expected to be won over by the cheese ones! We learnt how the fillings were mixed and the correct way to fill our dumplings so we were then left to our own devices. 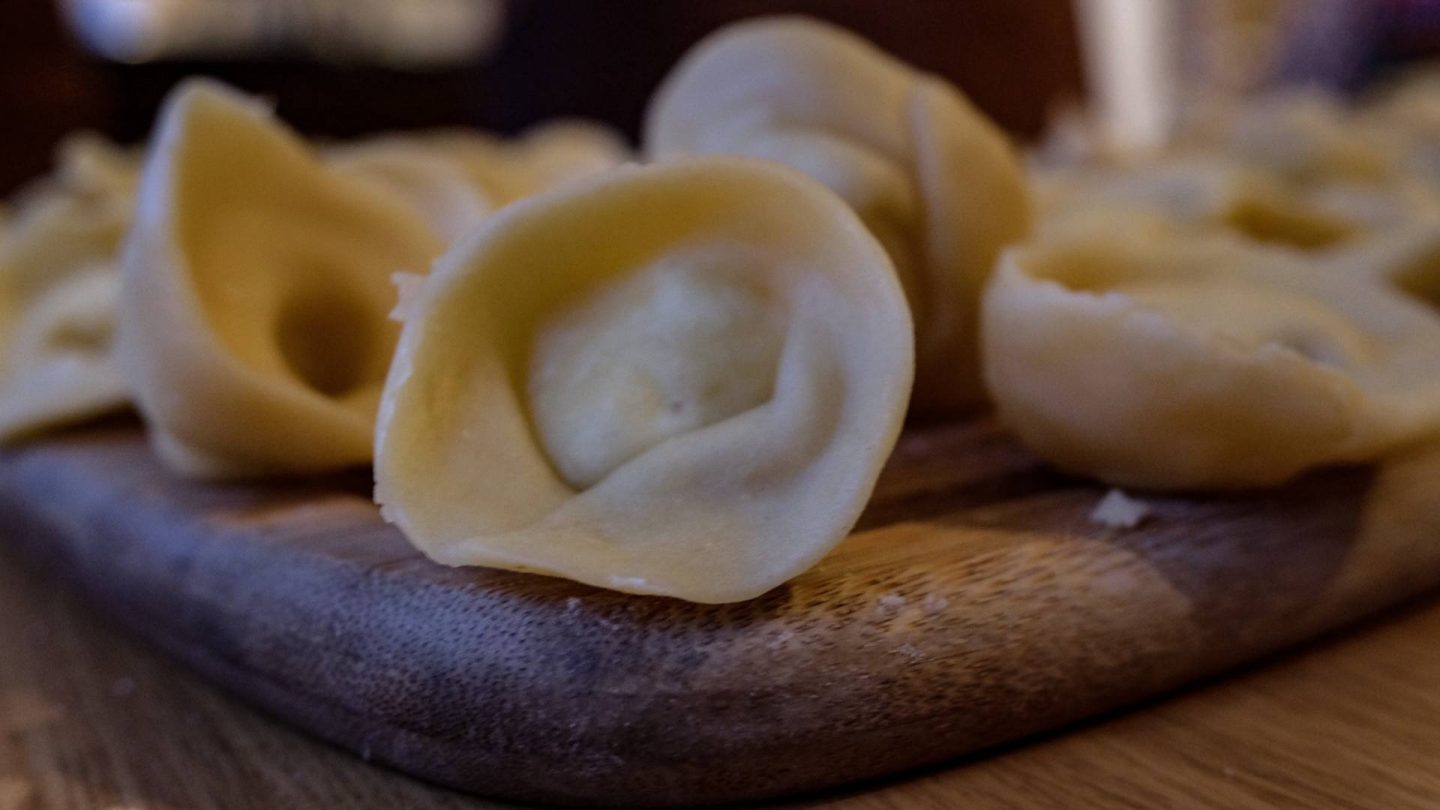 Katie made up our meat dumplings and I filled our cheese dumplings. We got better and better as we went on and got a lot quicker too! I was so proud of how well we did with them! I mean, they weren’t professional by any means, but for a first attempt, we did bloody good! 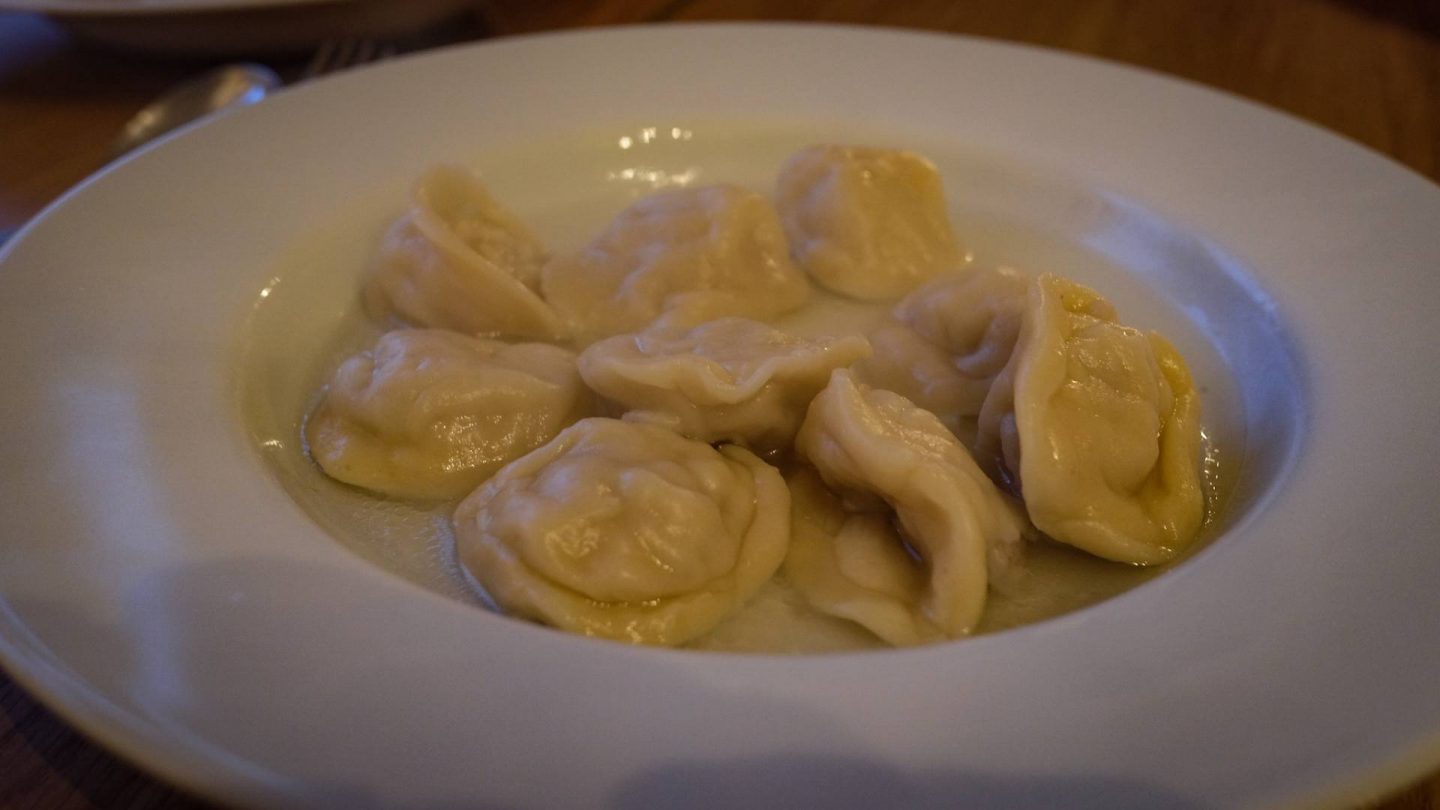 Once we had used up our dough and the fillings were all gone, we cleaned ourselves up and set up for dinner. Alla boiled our pork dumplings in broth and they were served with the broth too. These were so flavoursome and reminded me slightly of ravioli with the meat filling. The broth was really good too.

Some of the others in the group had a sprinkle of dill over the top which is a traditional way to serve them. On the Experience page on Airbnb, there are photos of these also being served with Sour Cream which would have a different way to try them as I’ve never had pork with sour cream! 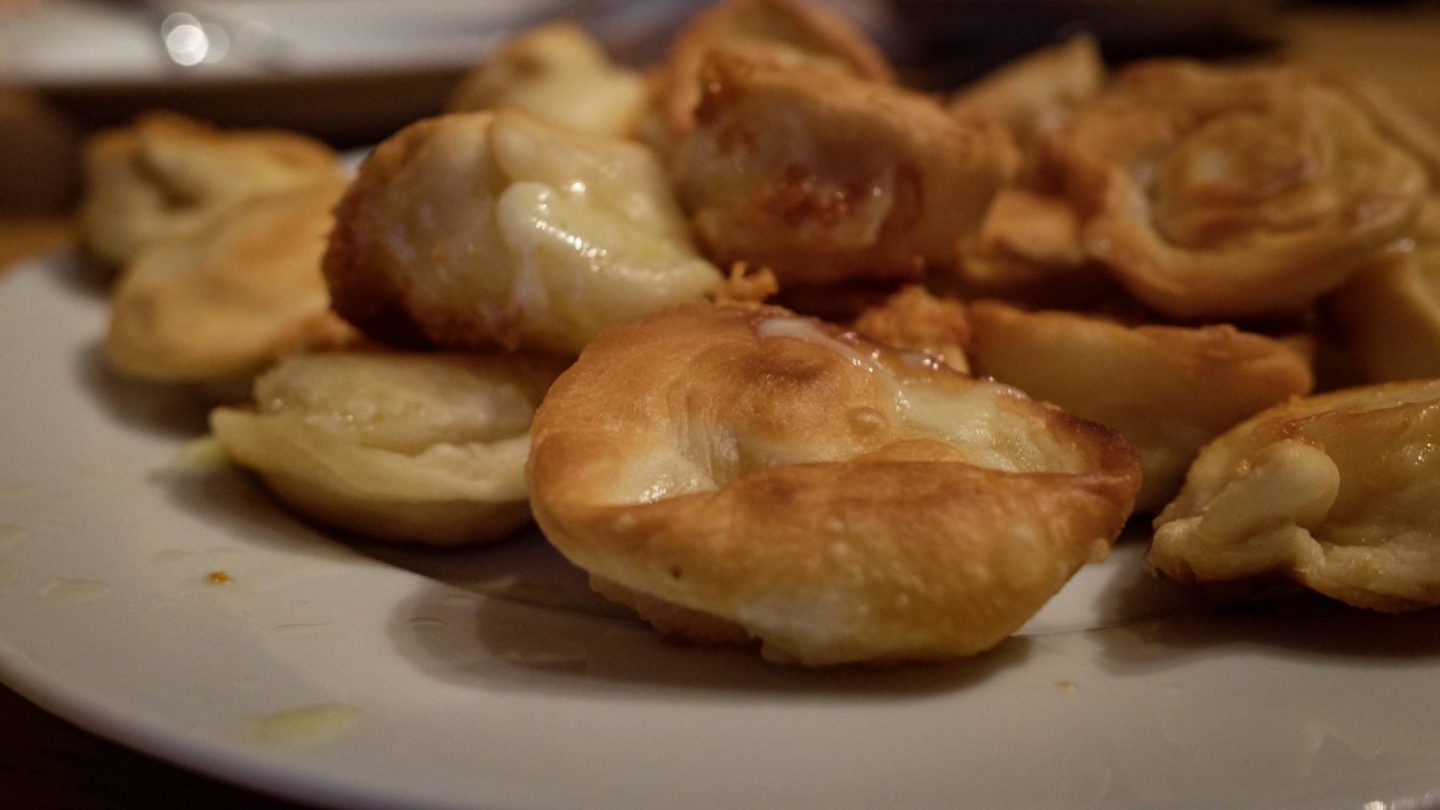 The cheese dumplings were deep fried and reminded me of stuffed dough balls. It was crazy how, despite being made from the same dough, that they tasted so different and had such different consistencies. These were very moreish and would be a great item to add to a sharing platter.

We had such a fun evening, filled with lots of laughter and learning now skills but I do wish we were given the leftovers to cook ourselves at home so I could have shown off my new skills to Mike!