How Easy is it to be Vegetarian at Bar + Block, Wimbledon?!

I was very kindly invited to review Bar + Block with in return for a review. However, as always, all opinions are entirely my own.

As you may have seen I’ve recently really cut down on my meat intake and we eat fully vegetarian at home. Whenever we go out now I do tend to eat veggie; I even managed fully vegan when we’ve been at music festivals this summer! This doesn’t mean I’ve got Mike to convert with me though, he does eat veggie with me at home, but I’m certainly not going to deny him a good steak once in a while as I know it’s something he really enjoys.

So when I was invited down to try the menu at Bar + Block in Wimbledon I knew it was a great chance for Mike to get a banging steak and for me to see what other options were available for me; I was pleasantly surprised, that’s for sure! 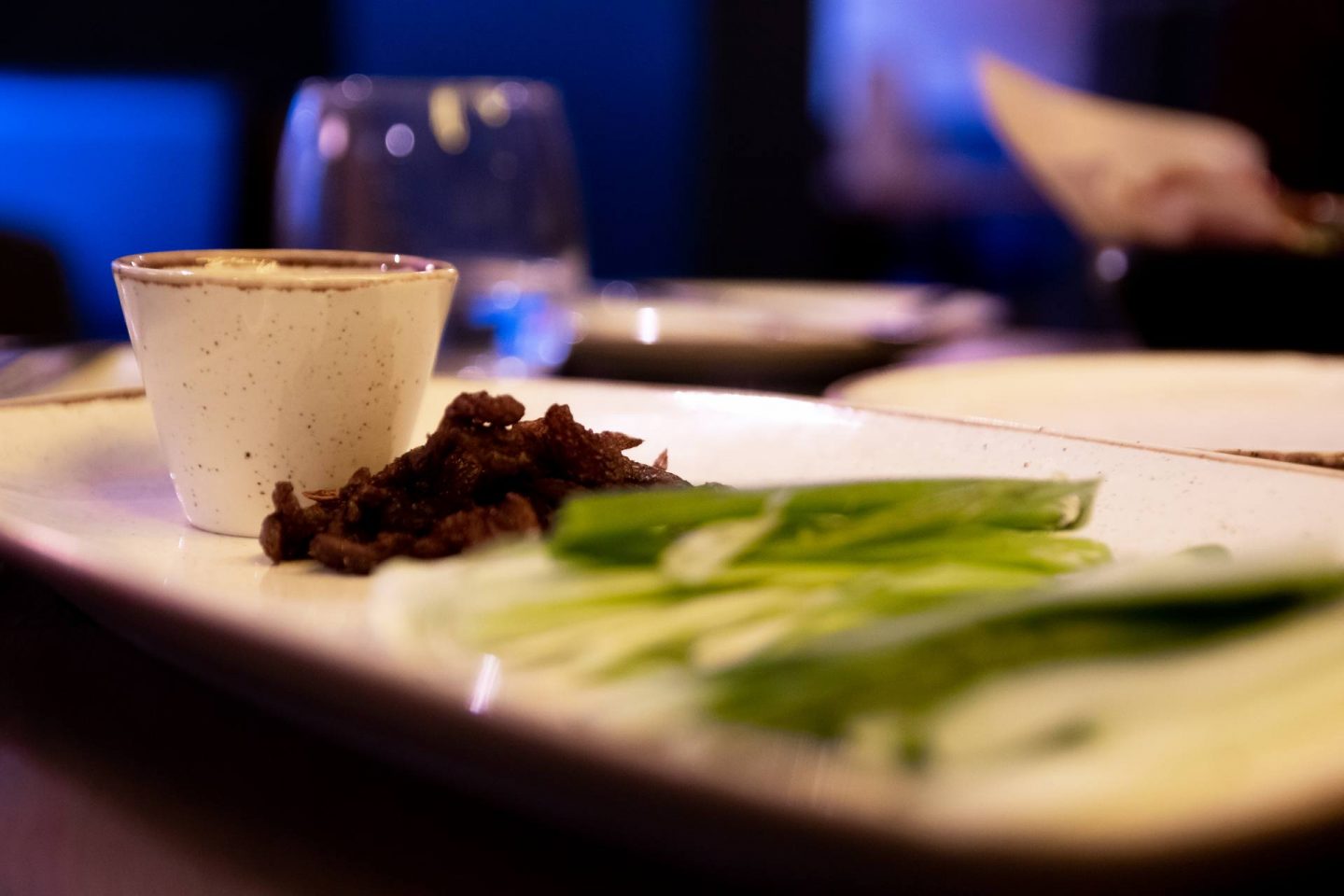 I kicked off the meal with one of the new dishes on the menu which is actually a vegan option, the Aromatic Crispy Mushroom Pancakes. They are Bar + Block vegetarian twist on crispy duck pancakes served with crispy aromatic oyster mushrooms and your usual side of cucumber, spring onion, hoisin sauce and Chinese pancakes.

These were really good and I’d never thought about swapping the duck for mushrooms. It’s something we can recreate so easy at home and we most certainly will be as I enjoyed it so much! 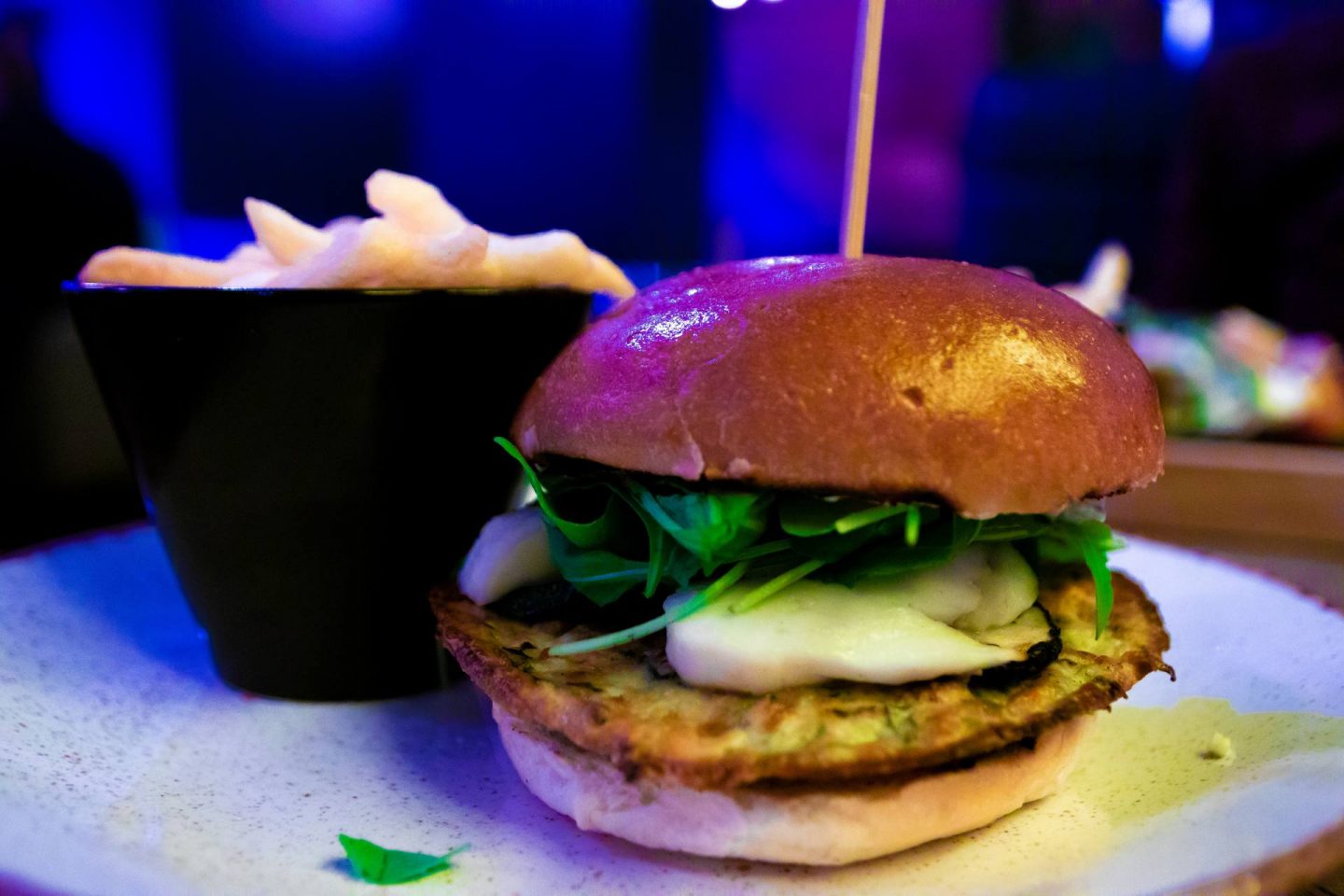 For mains, I couldn’t decide whether to have the Halloumi & Courgette Burger or the vegan Thai Green Curry. I eventually decided on the veggie burger which was chargrilled courgettes, grilled halloumi, on top of a Feta, chilli and courgette fritter, with rocket and tzatziki.

This was a really great veggie burger! I’ve got so used to the veggie option in most places being a ‘meat-like patty’ so it was a really welcome change to have a burger made from actual vegetables! I loved the addition of the tzatziki rather than having ketchup, mustard or burger sauce. All of the flavours worked so well together and I’d order this again for sure. 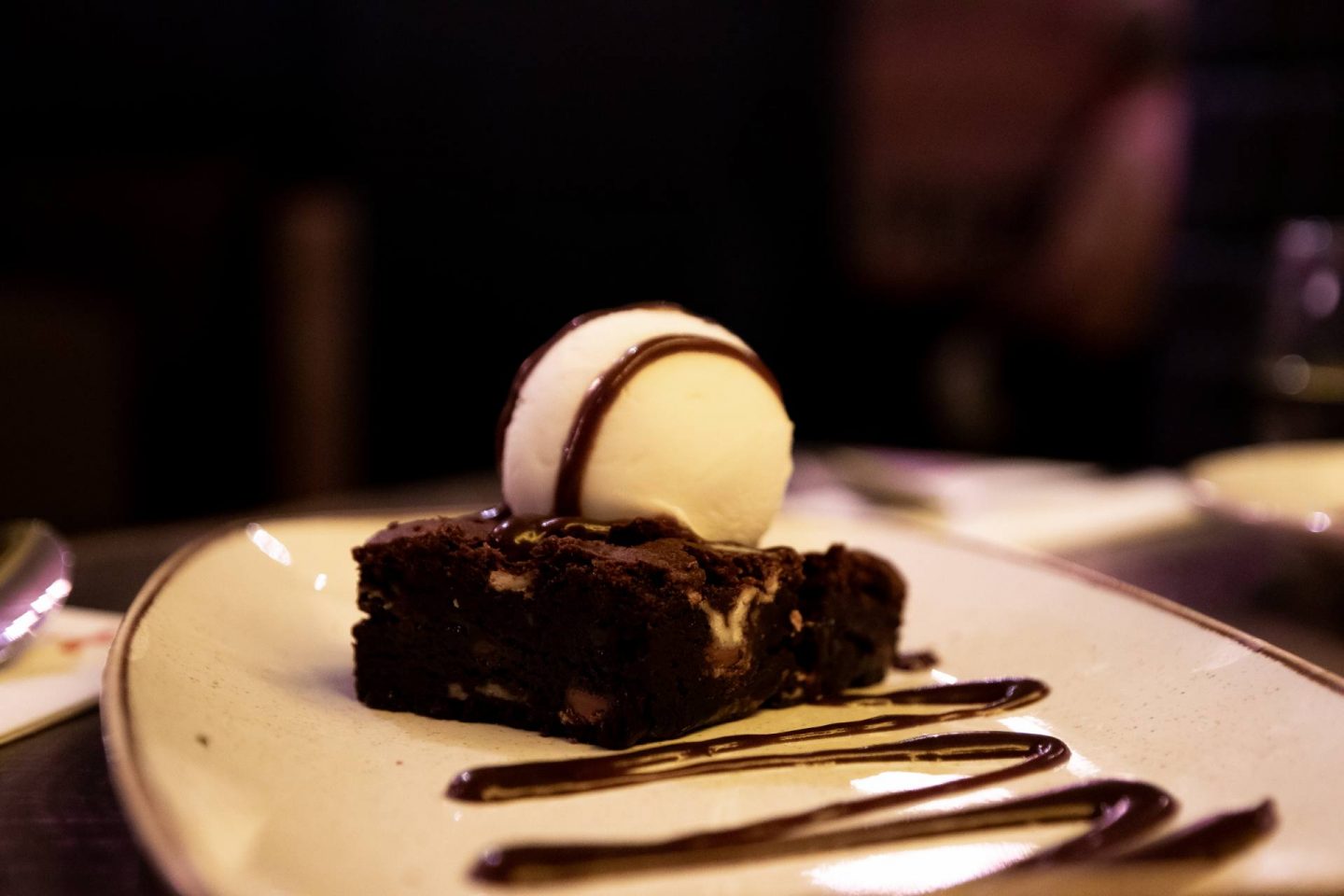 The Triple Chocolate Brownie that’s served warm with chunks of chocolate throughout and topped with chocolate toffee sauce and vanilla ice cream is also vegan so that was obviously what I had for dessert! You all know I love a chocolate brownie and this one was gooey in the middle and crunchy on the outside! 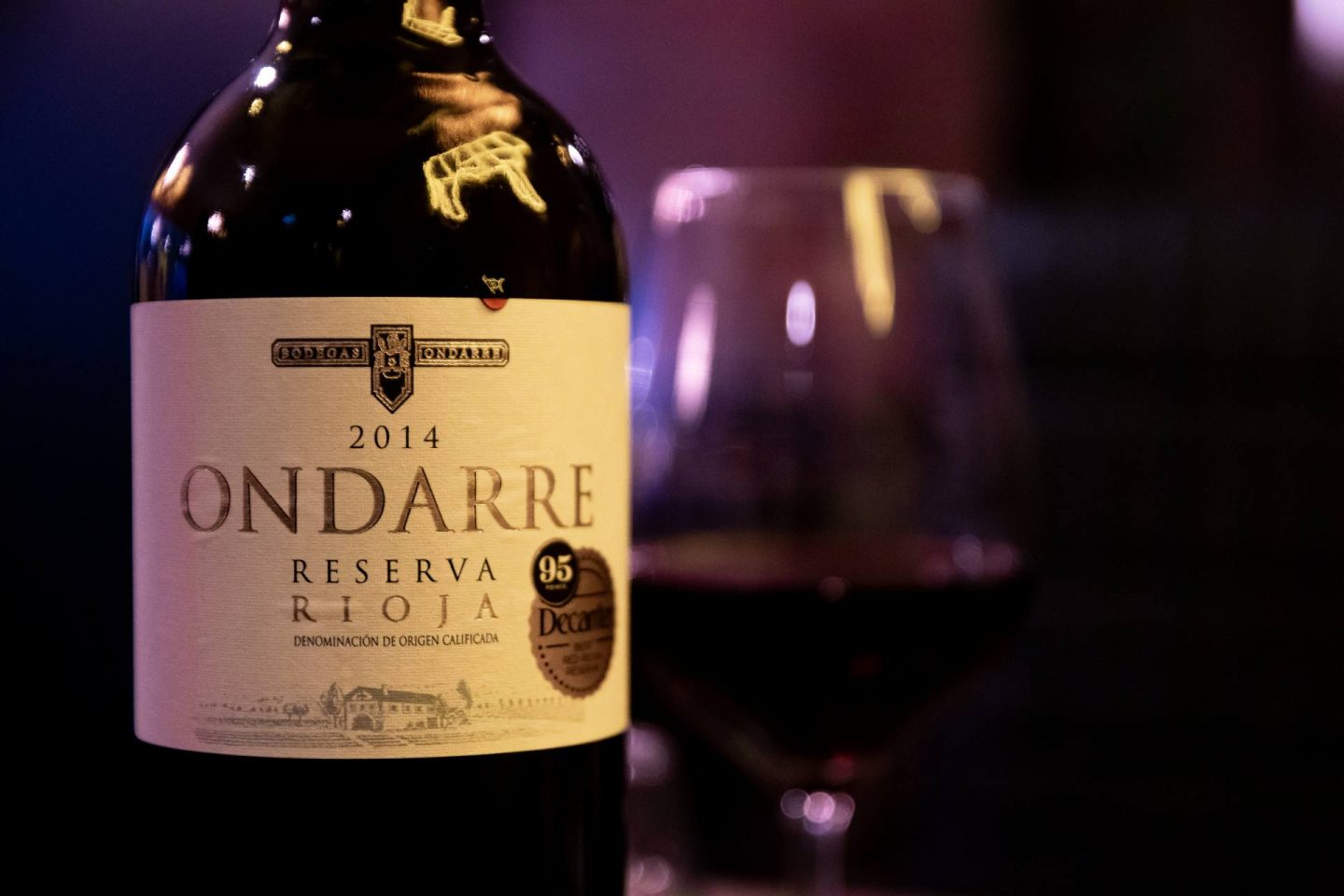 We teamed our meals with the Ondarre Reserva Rioja Spain which is an award-winning traditional Rioja with vanilla and spice with ripe, wild strawberries. It really complimented my veggie options so well, as well as Mike’s meaty options!

If you’re not into meat, then I’d maybe head to this page, then carry on reading as there’s a rather large chunk of steak ahead!

Mike kicked off his meal with one of the house favourites the Salt & Pepper Squid Crispy which was salt and pepper squid mixed with chilli and garlic served with lemon and garlic mayo with a wedge of lemon. This is one of his favourite starters and he demolished every last morsel! 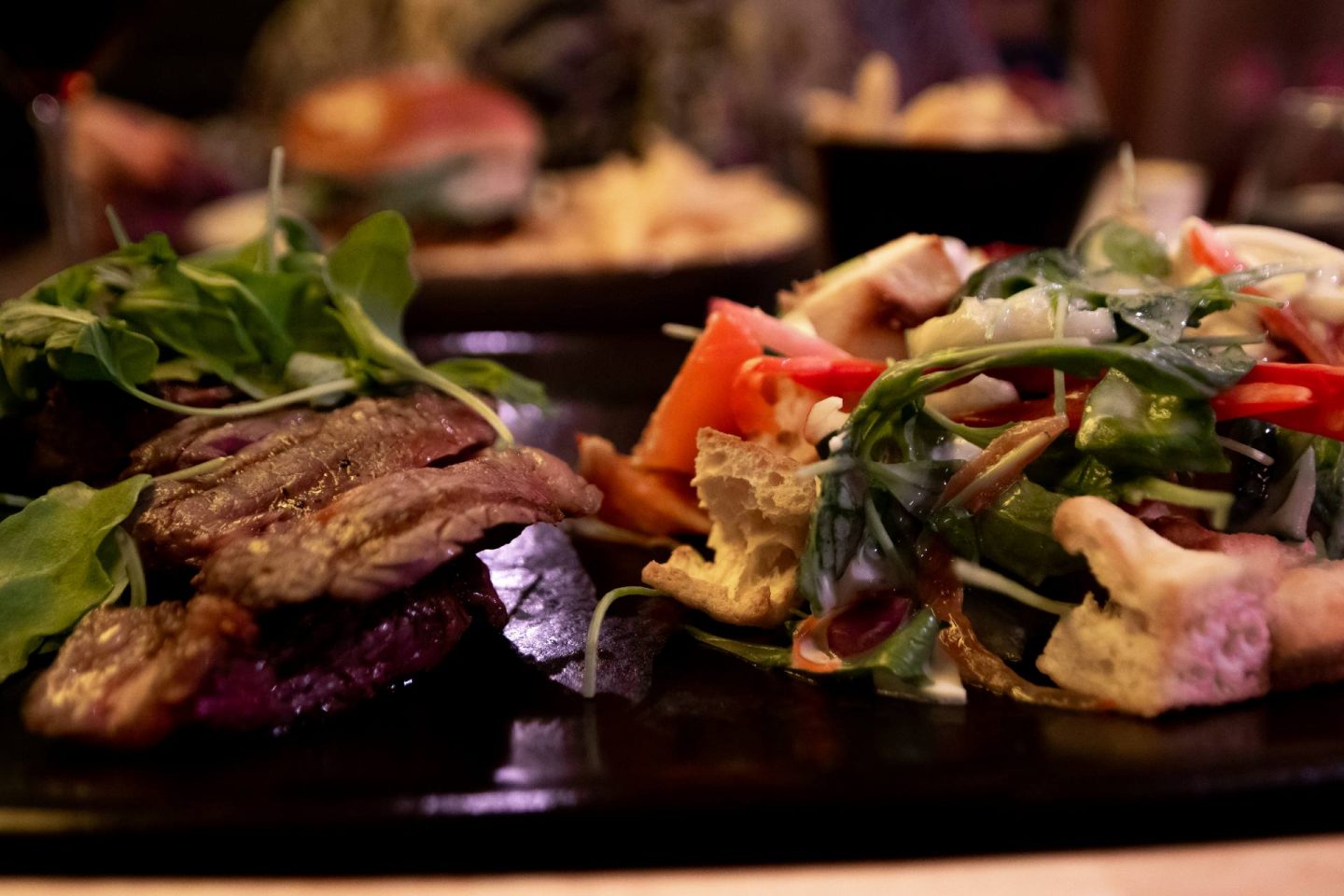 Mike’s main course was the special from the Butcher’s Block; Chargrilled Sirloin with Panzanella Salad. The Butcher’s Block is the cut for the season as well as their regular cuts, they source a range of unique steaks as they become available too.

Panzella Salad is a Tuscan style chopped salad of soaked stale bread, onions and tomatoes and other salad veggies too. This was a great accompaniment and Mike didn’t really need the chips he ordered as a side as this was far more filling than he thought it would be. The steak was cooked to just how Mike likes it too which he really enjoyed. 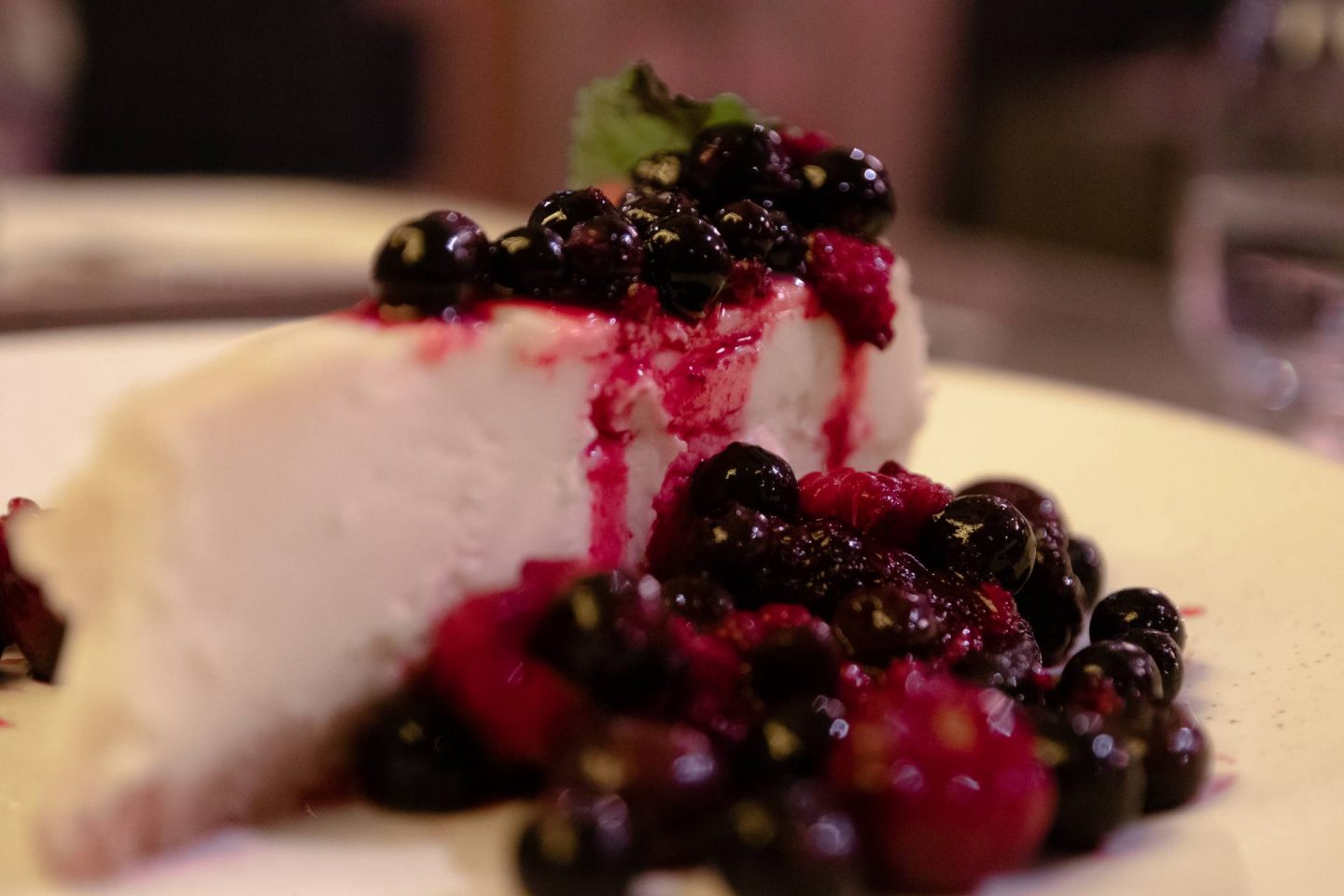 Mike is a huge fan of a slice of cheesecake so it’s no shock that he ordered the Lemon & Clementine Cheesecake drizzled with summer berries! He said it was really light and refreshing so a great dessert to pick after his filling steak!

So the answer is yes, you can eat veggie really easy despite it being a steakhouse!

We had great service and would certainly return to any of the Bar + Block locations for date night when Mike is hankering for a good steak and I want that yummy Crispy Mushroom Pancake starter!

Indulging at The Chophouse, Braintree *