You may have seen, if you follow me on Instagram, that Mike whisked me away to Norway for just short of a week for a surprise 30th birthday treat. I had lots of lovely DMs about what we were doing and I promised that I would do a little blog series to share; here is part two – 48hrs in Flåm. Read the first 48hrs in Oslo here. 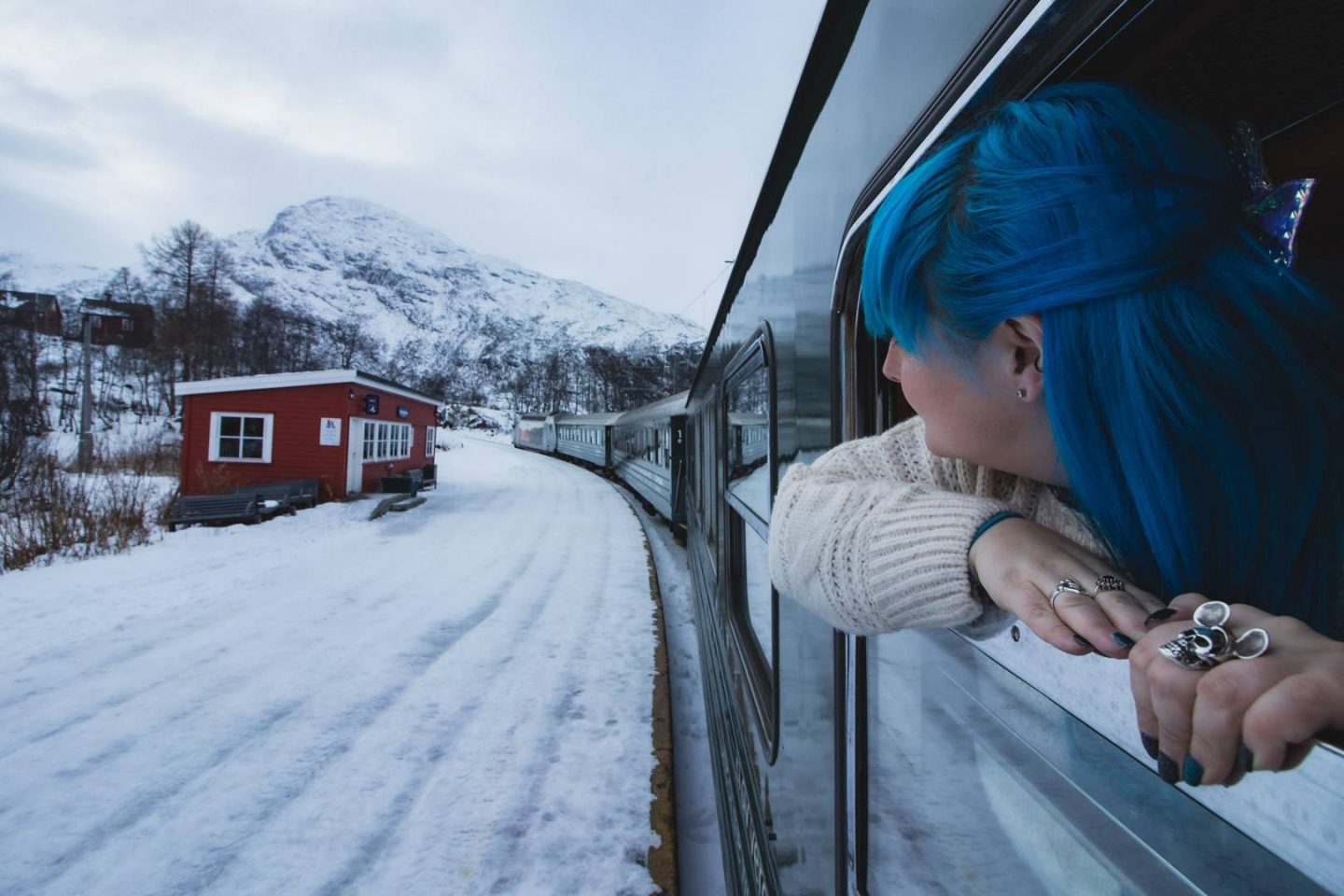 This has to have been one of the best parts of the trip as not only do I love a train journey, I love lots of good scenery too. So we hopped on a train from Oslo Central Station at 8:25 which we were on for just over 4 hours. Mike booked us the equivalent of first-class tickets as we had a lot of luggage with us and wanted a table too. We used the time to catch up on a few pieces of work and did some gaming, but we mainly spent it looking out the window as it was such stunning sites. I’m such a snow girl so seeing snow-topped hills and frozen lakes really was a treat.

We arrived at Mydral Station at 12:58 and here is where we swapped onto the Flåmsbana Railway which is listed as one of the most scenic railways in the world. It’s a mere 20km journey to the other end in Flåm but it descends 850m down the mountain taking in some insane scenery as you go. As it’s only a short journey, it only takes an hour, but it’s worth every penny. During the winter period that we visited in, a return is around £40.

We stayed in the Flåmsbrygga hotel, which is the only hotel in Flåm that has all of the balcony’s facing the fjord. 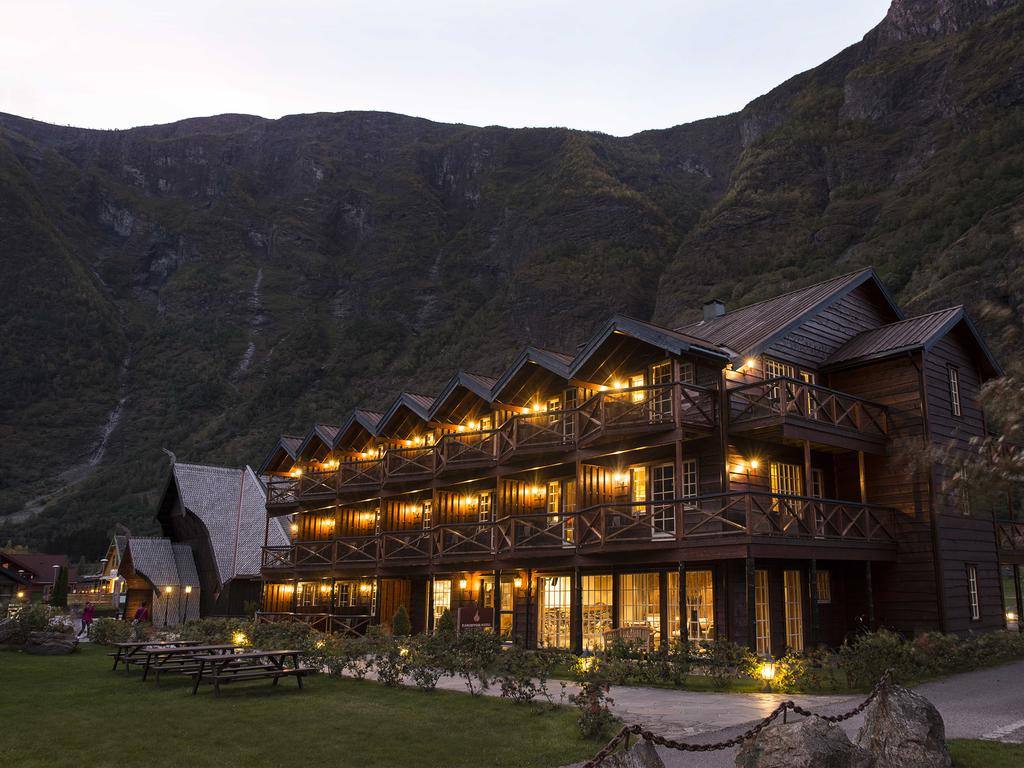 But do be careful when booking as not all rooms are in this main building. The hotel was clean, tidy and offered a really well-stocked buffet breakfast that filled us well up both mornings.

Flåm is a very tiny area so there isn’t tons to do but it’s lovely to just have a little wander around the local shops, take in the incredible surroundings and take some time out.

You must take an hour out to visit the Flåm Railway Museum which shuts at 17:00. 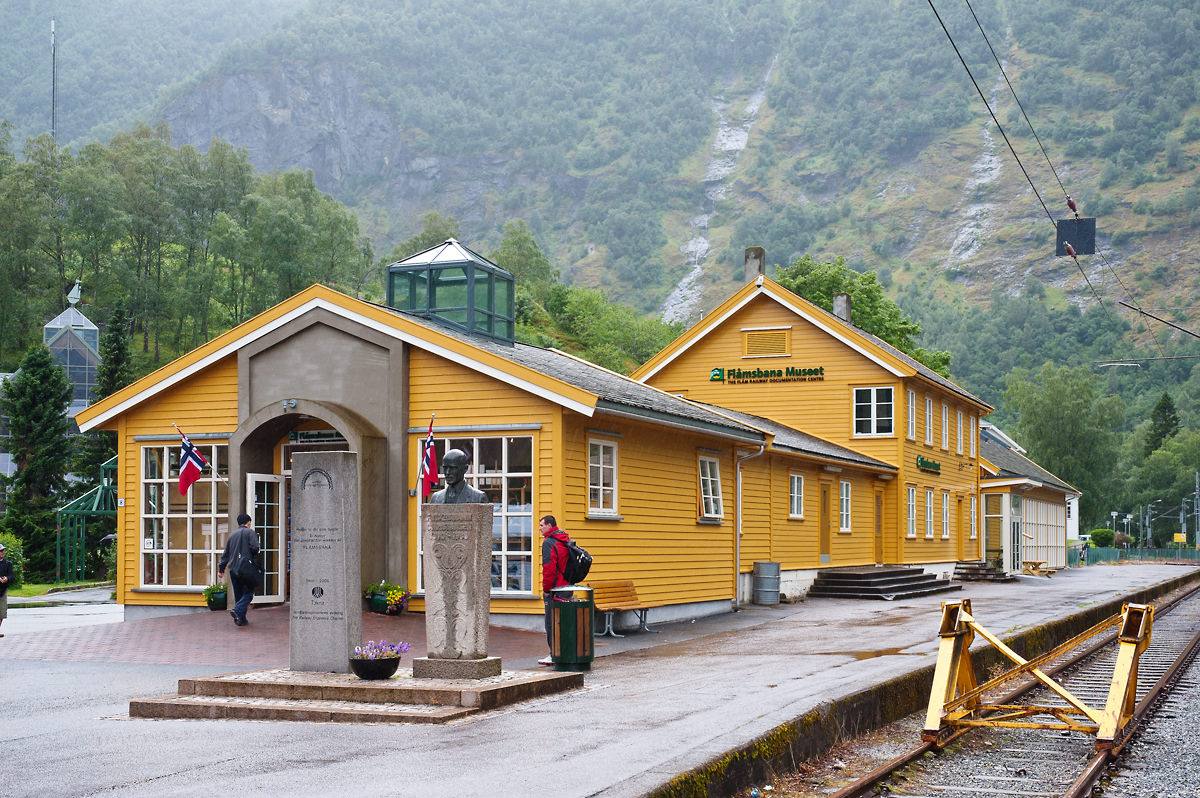 It’s free to visit and tells you all about the wonderfully historic railway that bought you down into town. It’s super cute and is right next door to where you get off the train.

On your full day in Flåm, I highly recommend hopping on the Fjord Cruise Nærøyfjord that departs at 09:30. 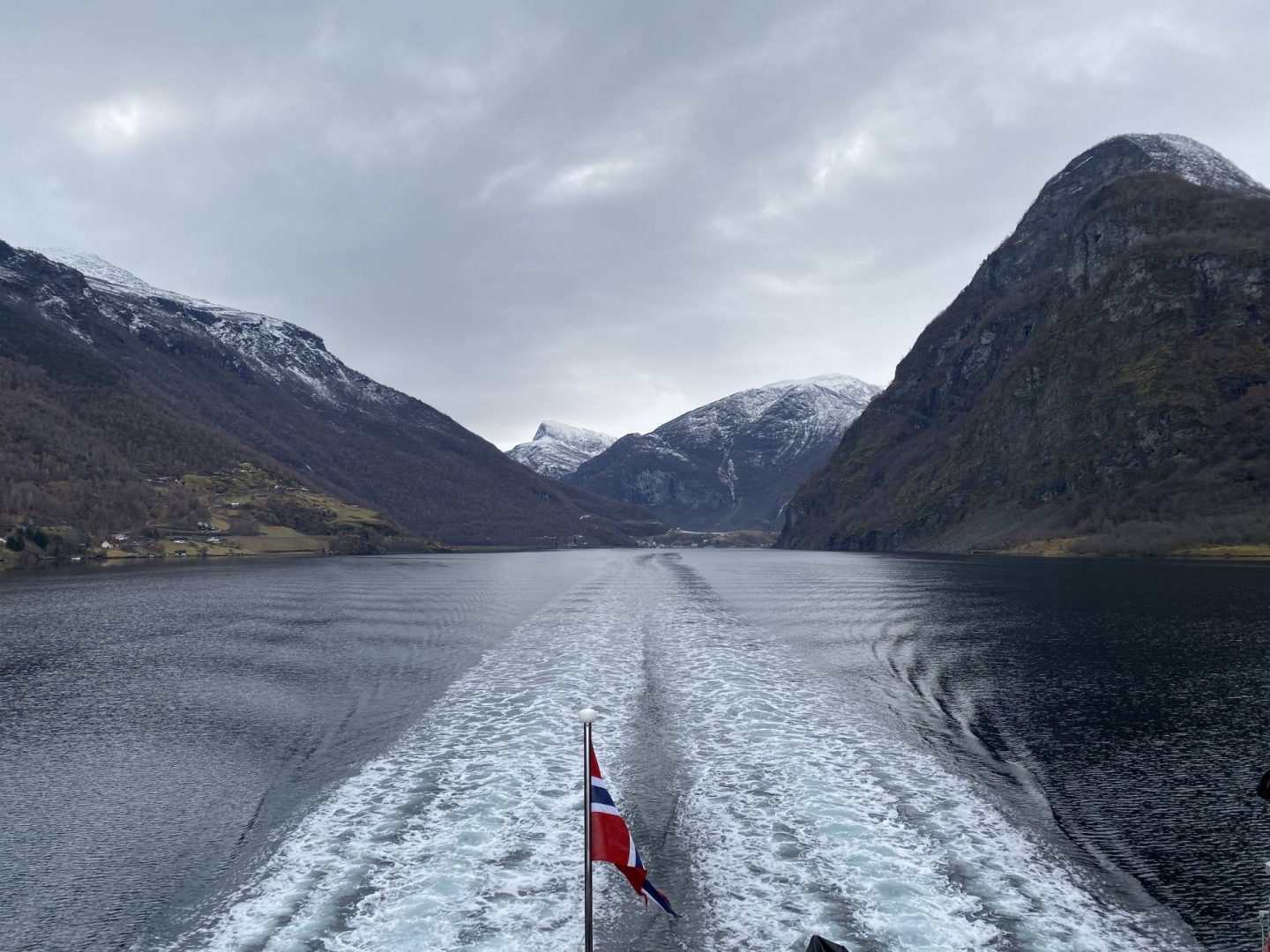 I think if I had a pound for every time I said ‘oh my god’ or ‘this is just like a postcard’ I could have paid for the trip outright! It really was beyond words. As you journey along there is a video that teaches you about each small town you go by including Aurland and Undredal which are both very well known for their own reasons. The boat we went on was a fully electric vessel which is one of the first of it’s kind. There was food, drinks and ample space onboard. The boat arrives at 11:30 in Gudvangen, your next destination for a few hours.

Fjord Cruise Nærøyfjord
Down by the Water – You can’t miss it!

Gudvangen Fjordtell (‘Place of the Gods’) was amazing; it’s a yet another UNESCO World Heritage site along with Flåm. 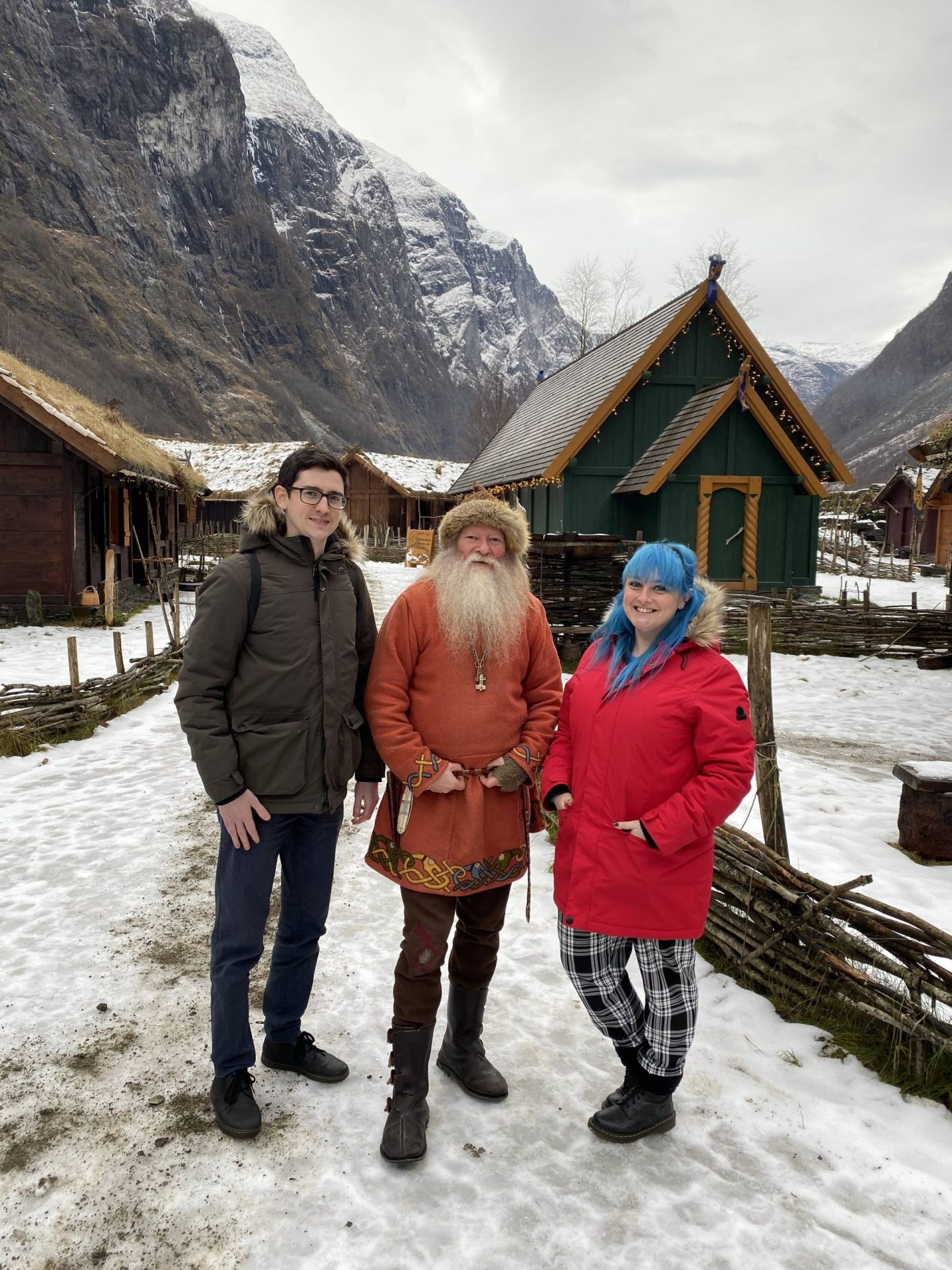 We spent a good three hours at the Njardarheimr Viking Village, and it was three of the most wholesome hours we spent on our trip. In Njardarheimr, modern-day people are transitioning to live as the Vikings would have and it’s so amazing to see. They make their own clothes, have fires to keep them warm, will soon be growing their own foods and all have their own homes. Every hour there is a guided tour in English which teaches you way more than you ever did at school.

We were kindly invited into the home of the head of the tribe for a game or two of hnefatafl which is a Viking version of chess. Mike was beaten twice, but we’re going to put that down to experience! We were gutted we had to leave but there is only one bus back to Flåm that departs at 14:18 – DON’T MISS IT! This is the only bus back unless you take the boat back.

As mentioned we had breakfast both mornings in the hotel We also picked up rolls, sandwich fillers, fruit and crisps for packed lunches for the day trip and the train back when we left.

Both evenings to went to Ægir Microbrewery for drinks, this brewery is part of the hotel and a brewery has stood on this same spot for many, many moons. 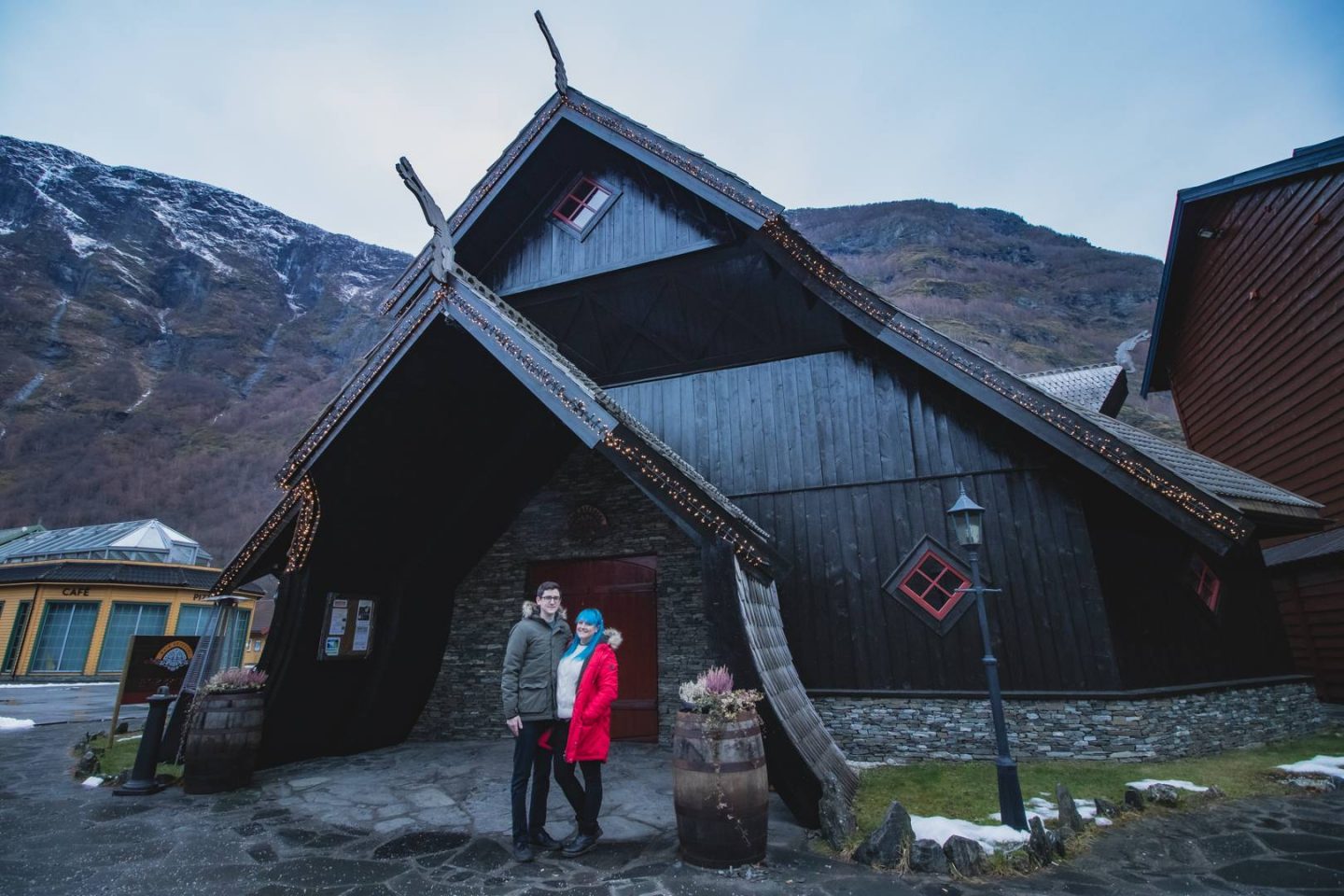 We had such great evenings and I so wish this was our local as it had such a wonderful vibe. It’s based on a Viking style longhouse complete with a stave style roof. Their own brews were so tasty and the staff were just incredible. My personal favourite was the Rallar Amber Ale, 4.7% alc, and Mike’s was the Sumbel Porter, 4.7% alc.

Our dinner on the first evening was over at Flåm Marina which is a restaurant just around the Fjord overlooking the water. 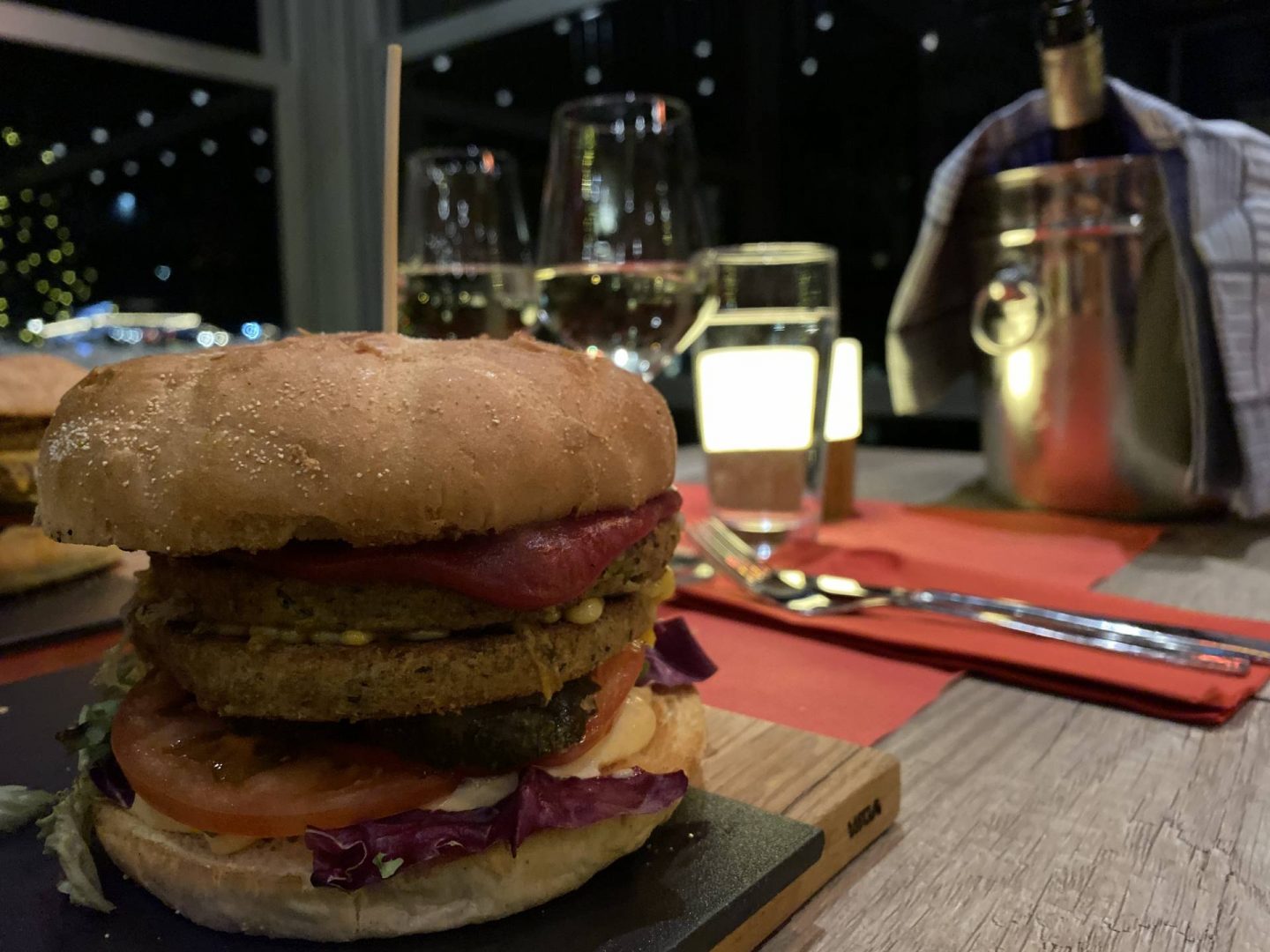 We both ordered the veggie burgers which were so well stacked and filled our empty tummies after a long day! We sat out on the terrace as this was now undercover with heat lamps; it was too nice to not sit out and look at the Fjord. We found the food and drink here really good value for where we were sat and with Norway being quite pricey!

Our final evening was spent at Ægir for dinner as upstairs, above the microbrewery, there is a restaurant.

We both went for the Viking Tasting Boards; Mike the meat version and myself, the vegetarian. There was so much food and my gosh, it was all so tasty. To top it all off, the boards, made up of 5 sections, were paired with a flight of 5 of the Ægir beers. Mike’s meal included pork and reindeer with a stew, starter and a chocolate dessert. My meal had a cheese starter, a divine broccoli course, a vegan burger, a Quorn dish and I finished up with the same chocolate dessert. We had great service, as expected and would more than recommend this as a dinner stop if you’re in Flåm.

We loved having some downtime amongst two busy cities; we had time for walks, casual evenings in the microbrewery, lots of photography and met some amazing locals. I’m 100% booking a Norwegian Fjord cruise to be able to visit Flåm yet again.