I’m not usually one to post about Christmas before my birthday but this year I think London has really upped it’s game!  I wanted to share with you a few of the Christmas bits and bobs I’ve been up to over the past month! 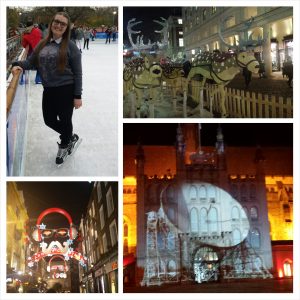 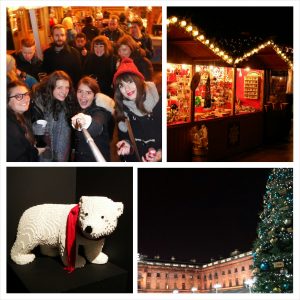 I’ve been a bit of a wally and not uploaded the photos in the order of when I visited so bare with me!

The first Christmas event was Ice Skating with Google at Somerset House (far bottom right), this is by far my favourite ice rink in London.  The ice is perfect, for those that rent skates they’re not plastic death wellies and it’s just stunning when it’s lit up!

My second Christmas event was an afternoon spent at Winter Wonderland (far top left) and another ice skating trip. I have to say the ice here is awful and I wouldn’t recommend it if you’re not a confident skater! I made videos of my trip; part one and part two.

Third up was a pre-Christmas catch up with 3 of my favourite ladies, this ended with a walk down Carnaby Street (far bottom left). It’s so pretty this time of year and is home to my most favourite shops in London!

Next up was Winter Wonderland part two, a trip with my office. That’s the HUGE group of us up there! Around 30 of us went and it was awesome!  There was more ice skating and lots more feeling sick on rides!

Art of the Brick is up next, that’s the amazing Lego Exhibition in Brick Lane.  It’s not hugely Christmas based but a few pieces suck in.  It’s now running until April so you have no excuse not to go!

The last two come in the shape of London walks and the first was Southbank Winter Festival. It’s like a mini Winter Wonderland, and from there we walked to Westminster Bridge, crossed the water and all the way down to Tower Bridge taking in London at its best.

Last up was a longer London based walk; we started at Covent Garden to see the Lego Santa and sleigh, and then walked down Southbank to St. Paul’s, began a quest for Paddington Bears, failed miserably, and headed to Liverpool Street to grab the train home.  We also stopped by Guildhall that was lit up with space themed images, totally awesome!!

I don’t think I’m ever happier than I am when walking out in London during the evening, although ice skating does come close!