When a new restaurant opens in Essex, you can count on me to be there to give you the down low. The newest addition to Maldon is Dante’s Brasserie; opening in September 2018 in The King’s Head Centre, which is a 16th century listed former pub that now houses independent businesses.

Dante’s has been named after Charlotte and Mario’s, the owners, young son, and they’re on a mission to bring the highest quality fresh fish and seafood to Maldon. At Dante’s they want you to find a modern style of British cooking brought to you from the heart into a real homely restaurant.

Their Head Chef, Gabriele Nicolosi, has brought together a seasonal menu for both lunch and dinner, which greatly depends on what is the freshest fish he can get his hands on at Billingsgate Market and what local produce is available. A big part of their menu really is the local produce and they get their smoked salmon from Maldon based Smokehouse, Lambton and Jackson, they use only the best Maldon Oysters and delicious coffee from just down the road in Writtle from roasters Mac & Me.

After chatting with Mario on what he thinks are the best dishes on the current January daytime menu, we finally made our decisions on what to order. 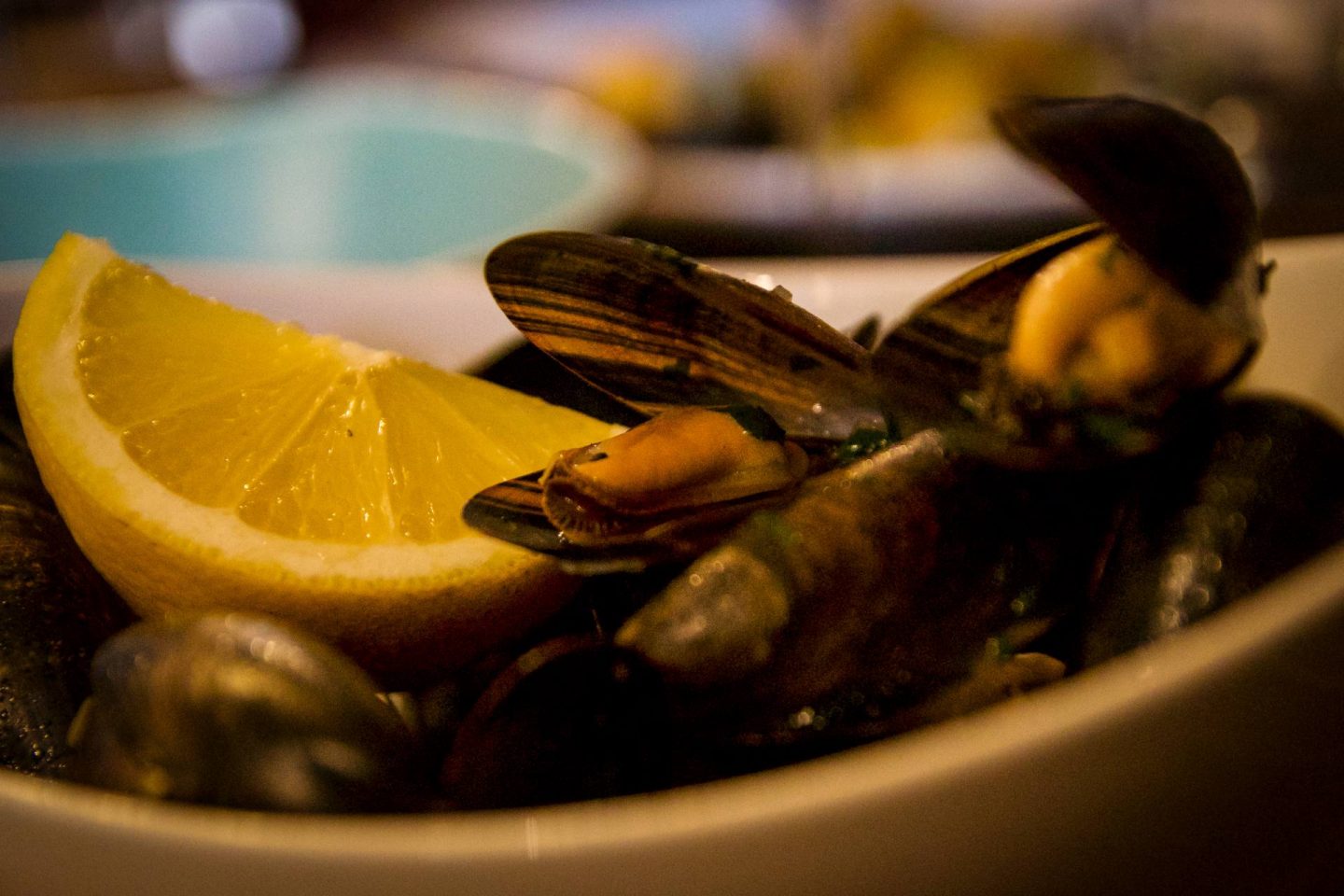 As no surprise, Mike ordered the Shetland Mussels served in a white wine and shallot broth with slices of crispy rice for dipping. He’s not often one to enjoy a lot of sauce but he was actually drinking the broth from this as though it was a bowl of soup so that’s just how good it was. The mussels were great quality and filled with flavour. 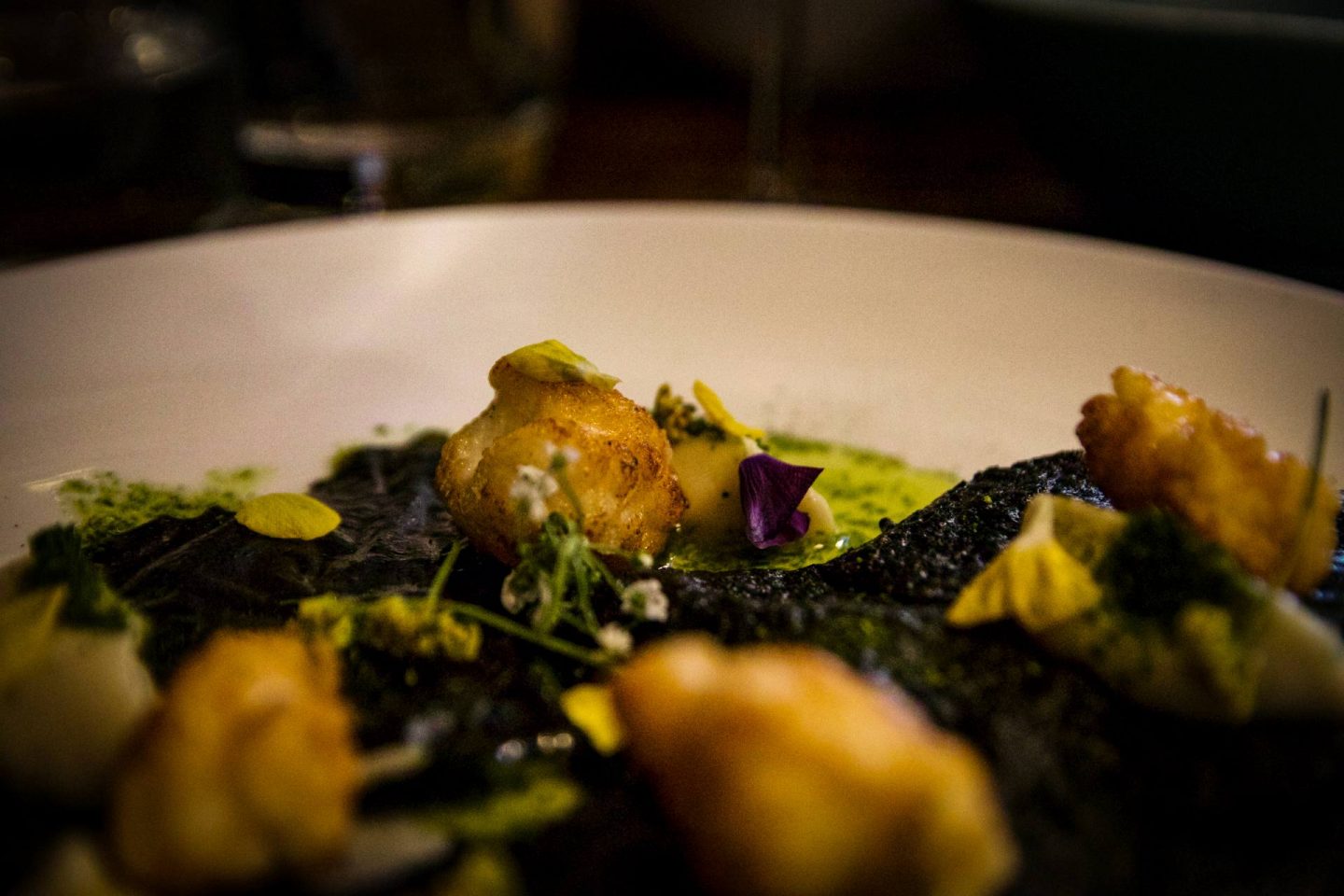 I had actually chosen the starter that Mario said was his favourite which was Squid gnocchi served with a black ink rice crisps, fennel puree and dill. The different textures and flavours in this were unreal. Every mouthful was something different, yet nothing overpowered the other aspects of the dish and each texture fully complemented the others. 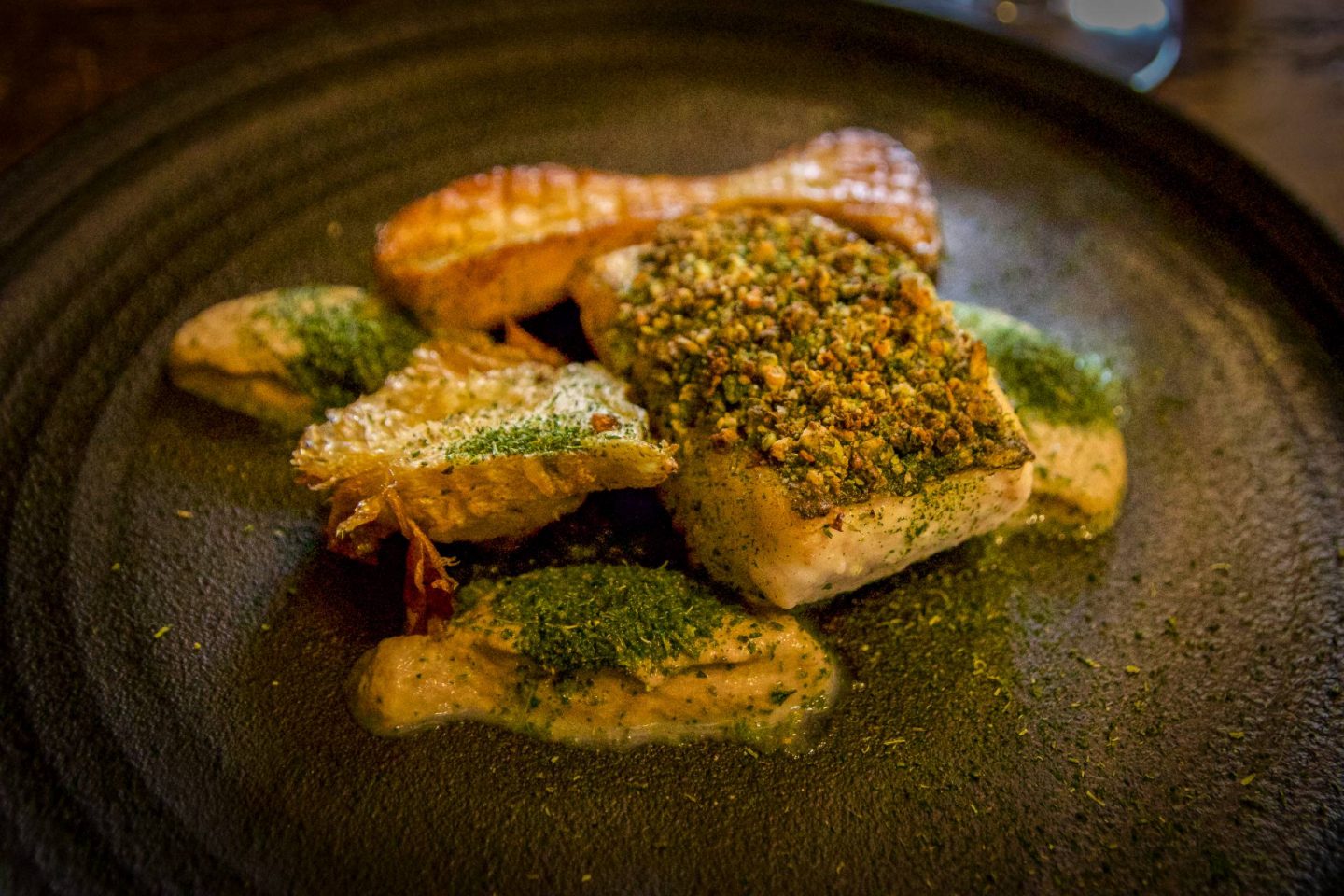 I’d also chosen the main course that Mario had suggested, I just have great taste it seems! This course was pan-fried hake with a pistachio crust, Jerusalem artichoke puree and an awesome fish shaped king oyster mushroom, which was so good! I was actually a little disappointed when my plate came to an end. I ordered a side of spinach but skipped on the carbs and I really didn’t feel this meal needed them as the portion size was just right. 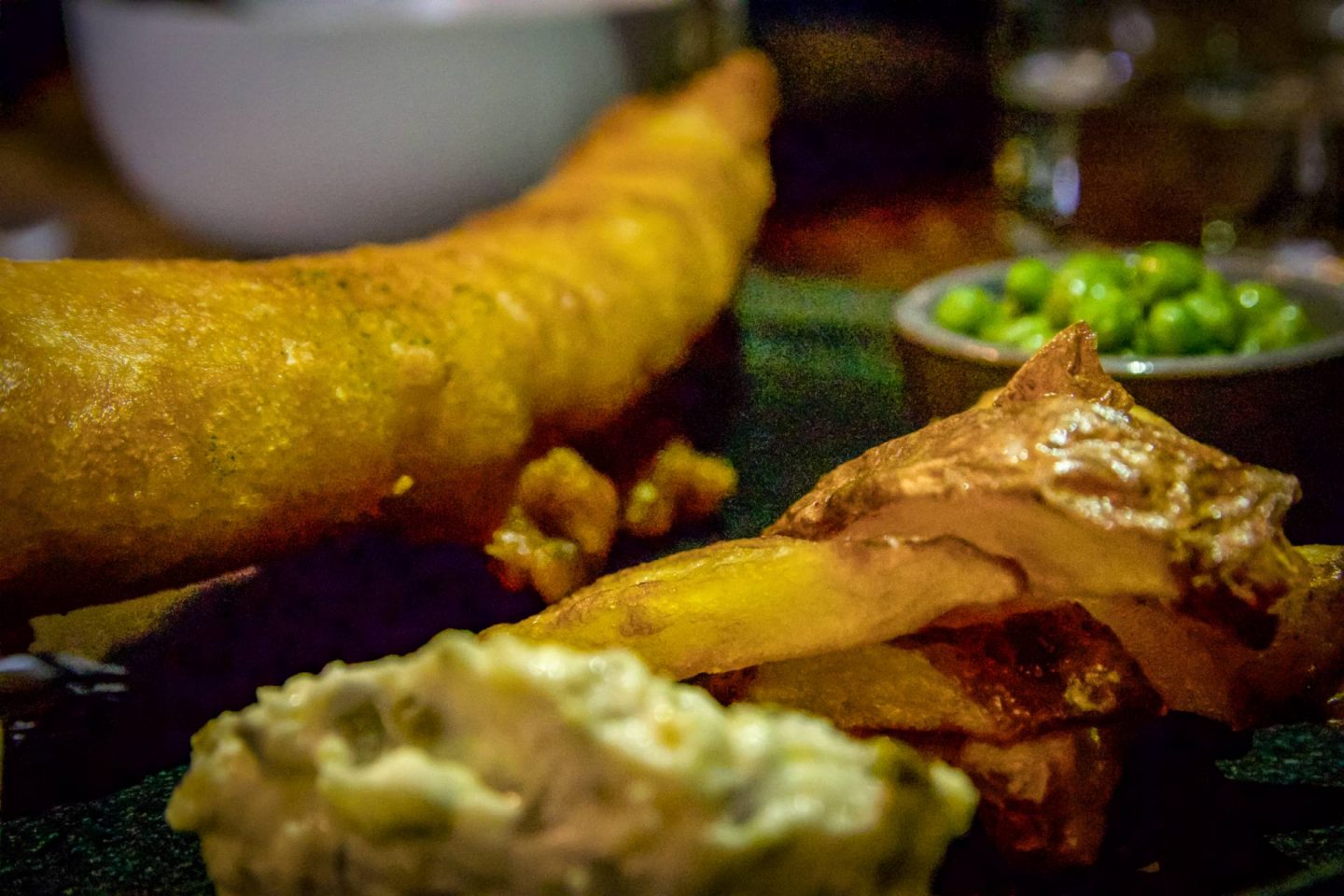 Mike went for the traditional fish and chips with an incredibly light beer batter, triple cooked hand-cut chips with a pot of minted peas and homemade tartare sauce. He devoured every single crumb on his plate including all of the sauce. He loved how light the batter was and how the fish was the main focus as often with this dish you can be given far more chips than fish which isn’t how it should be. 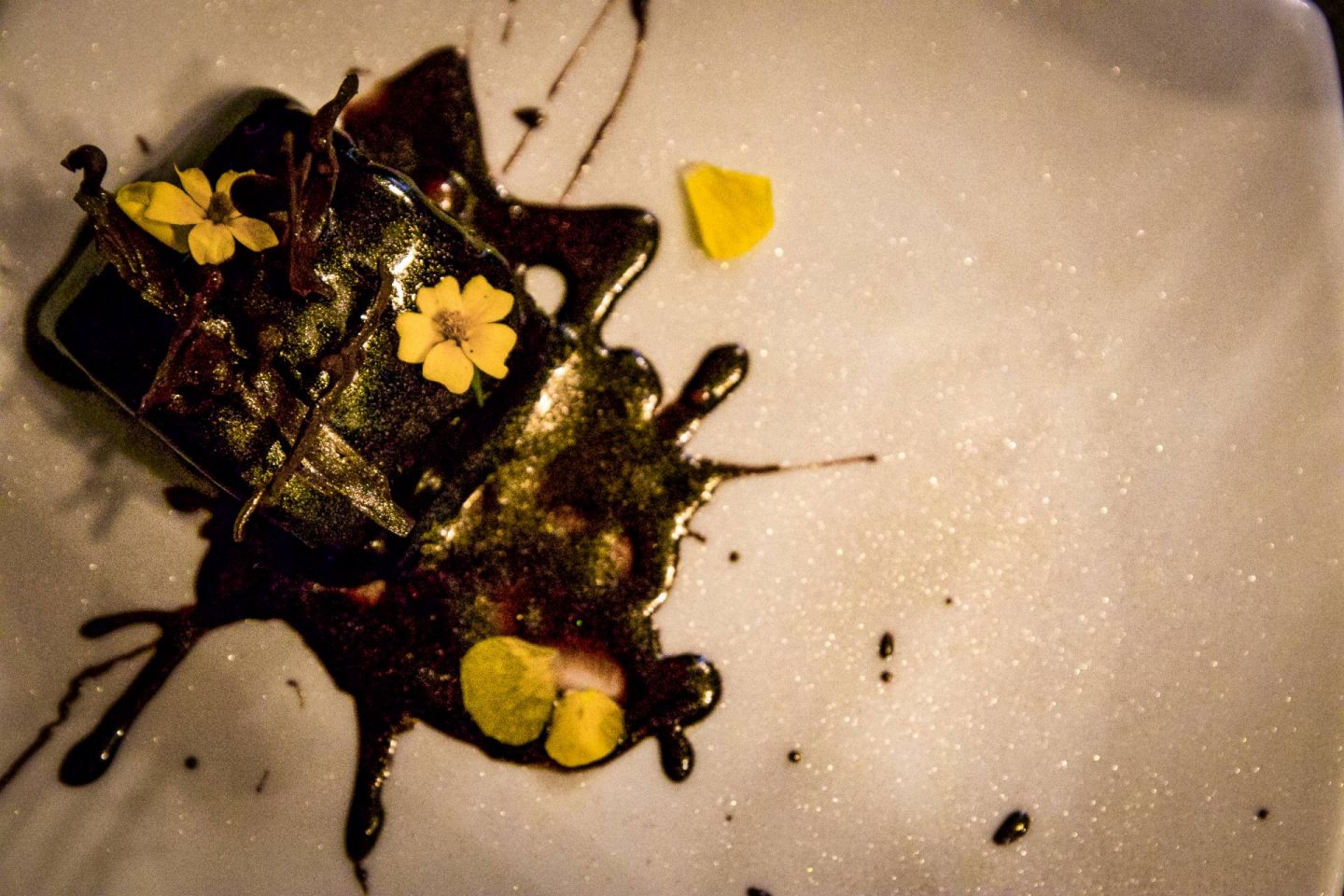 For dessert, after seeing a gentleman on a nearby table be served the Setteveli chocolate cake which is Pan di Spagna, hazelnut, praline, chocolate, almond and cream, I just had to have it. This is a really technical dish with so many different layers and textures that I savoured every single mouthful and, again, didn’t want it to come to an end. Although it was rich in flavours this wasn’t one of those choccy cakes that leaves you feeling stodgy, I felt pretty darn good after it! 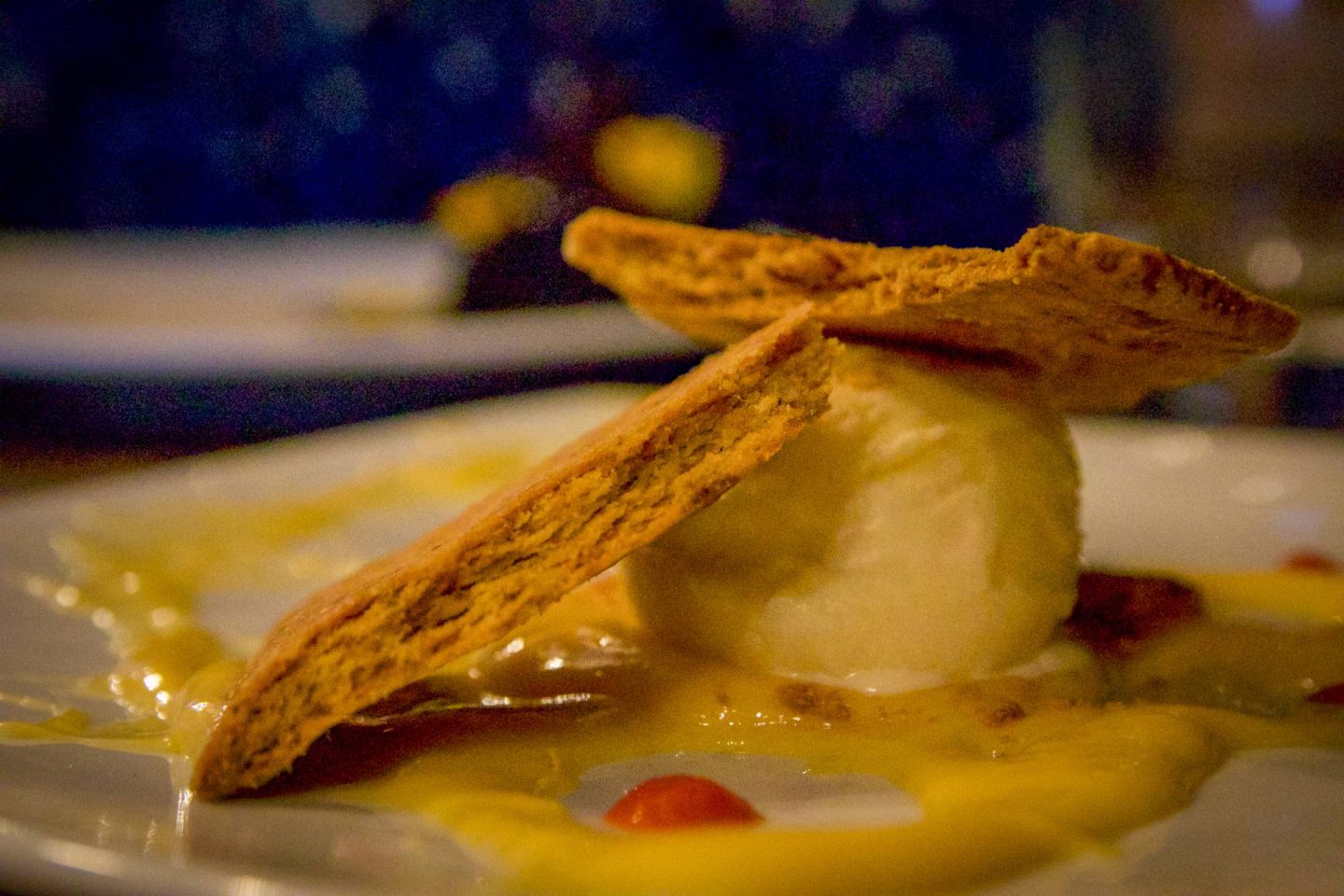 Mike’s dessert was pretty awesome! He chose the Limoncello zabaglione with clotted cream vanilla ice cream and almond biscotti based on the ‘Oops I Dropped the Lemon Tart’ dessert from Massimo Bottura’s three Michelin-starred restaurant Osteria Francescana, known as the best restaurant in the world in 2018, where sous chef Taka Kondo had only two lemon tarts and accidentally dropped one of them before serving it. To make them match up, he smashed the other tart and one of the most famous desserts was born! Mike felt this remake totally did the original one justice and would most certainly have it again.

We had such a fantastic afternoon with top class service, impeccable food and a lovely glass of organic wine each, all served up in a really well-decorated room. The chefs do an outstanding job with the space they have, seriously, they have about as much space as my kitchen in the flat and they work flavour miracles in there!

We love supporting local businesses and this is one we will most certainly return to time and time again.

What do the People of Essex Love…