Dining Around the World Buffet Style at COSMO Restaurant, Romford

I was very kindly invited to COSMO Restaurants in return for a review.  However, as always, all opinions are entirely my own.

When I said to my girl gang that I was heading to COSMO for dinner, they all lost their minds telling me how much they all love it. This put my expectations at quite a high level.

I, myself, hadn’t been to COSMO in at least ten years and Mike had never been. Since my last visit, COSMO in Romford has changed location from South Street, next to Romford Station, to inside The Brewery. A far nicer location, if you ask me. 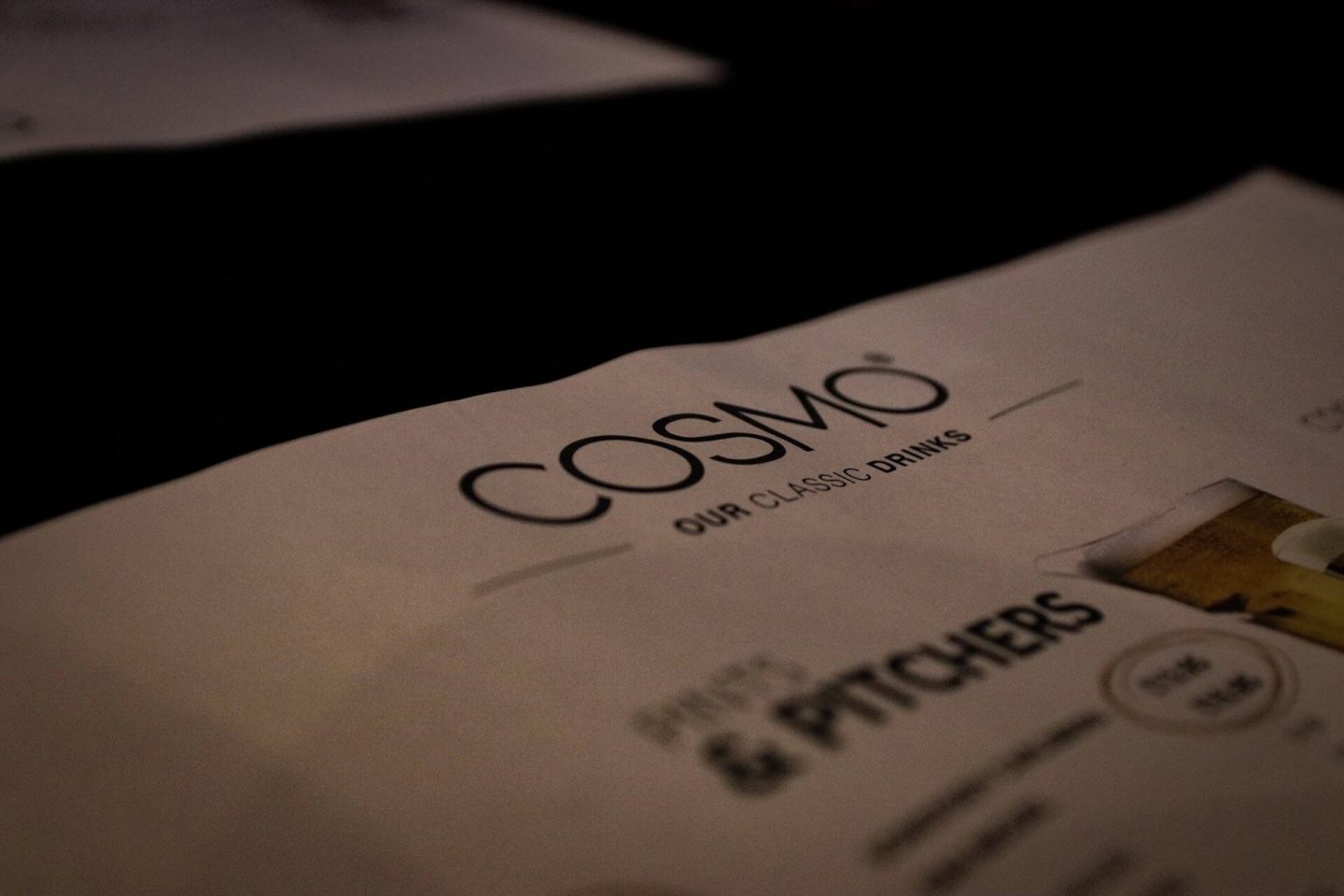 COSMO claim that they don’t think we should have to choose between our favourite cuisines, so for one fixed price, we can experience eight live cooking stations and take our pick from 150 dishes. That fixed price happens to be really good value too. Weeknight dinner are £15.99, Friday and Saturday dinner is £16.99 and all day Sunday plus Bank Holidays are £16.50.

Weekday lunch is £8.50 and Saturday lunch is £11.99. There are slightly fewer offerings of a lunchtime but that’s obviously reflected in the price.

They have so many sections of buffet food including a Carvery, the Indian House of Spice, World of Asia, Tasting Kitchen, Continental, and the Deli. There’s also a huge dessert section, but more on that later. 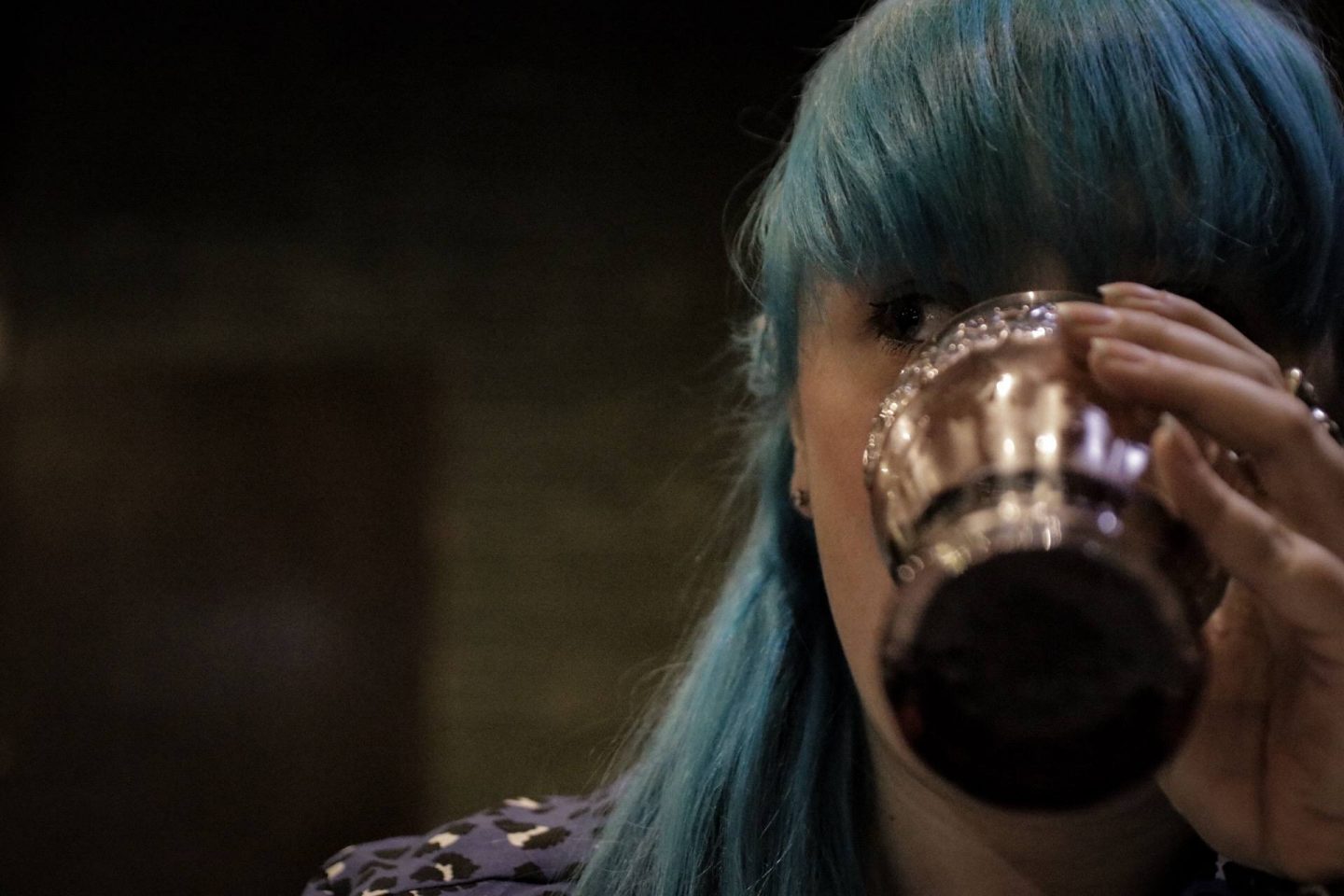 Upon arrival we were shown to our booth and order a bottomless soft drink and bottle of water. I’d walked from the flat to the restaurant so I was rather parched. I felt like a small child when I filled my glass to Sparkling Vimto and felt the sugar rush immediately.

We did also order a bottle of Australian Woolshed Cabernet Sauvignon. With the average shop price of around £15, according to Vivino, paying £20 at COSMO for it was a really reasonable mark up for once. The wine went really well with all of the options of food we chose. 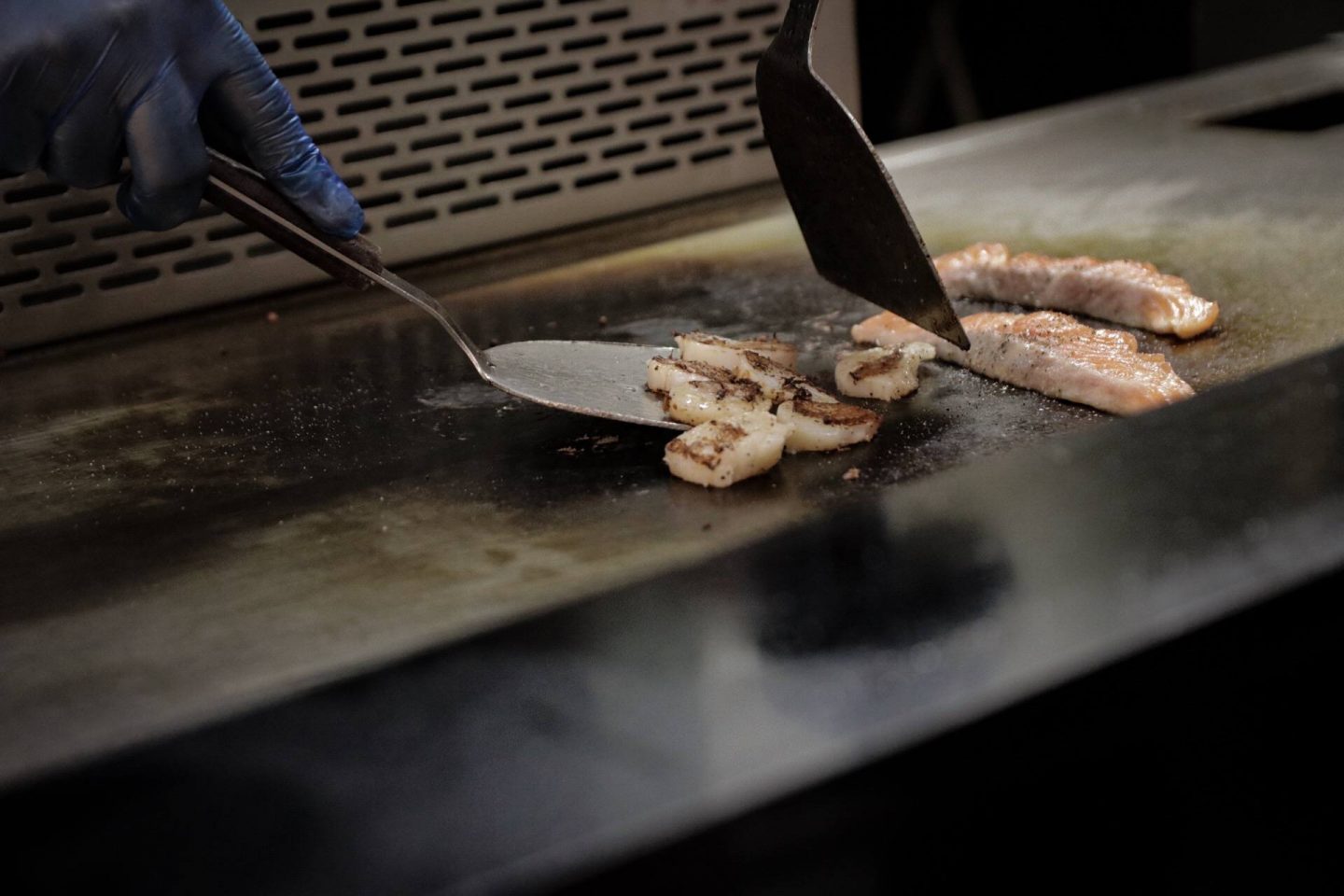 Ok, I’m going to admit I did feel a little overwhelmed by all of the choices. I had no idea where to start as I just wanted all of it on my plate in one hit. That wasn’t going to happen so I had to play it tactically! I mean, who doesn’t have a plan when they’re hitting an all you can eat buffet.

Then it came to me. Tackle each section as though it was a tapas style meal. I headed to the Teppanyaki station first to get my plate of starters on the go. 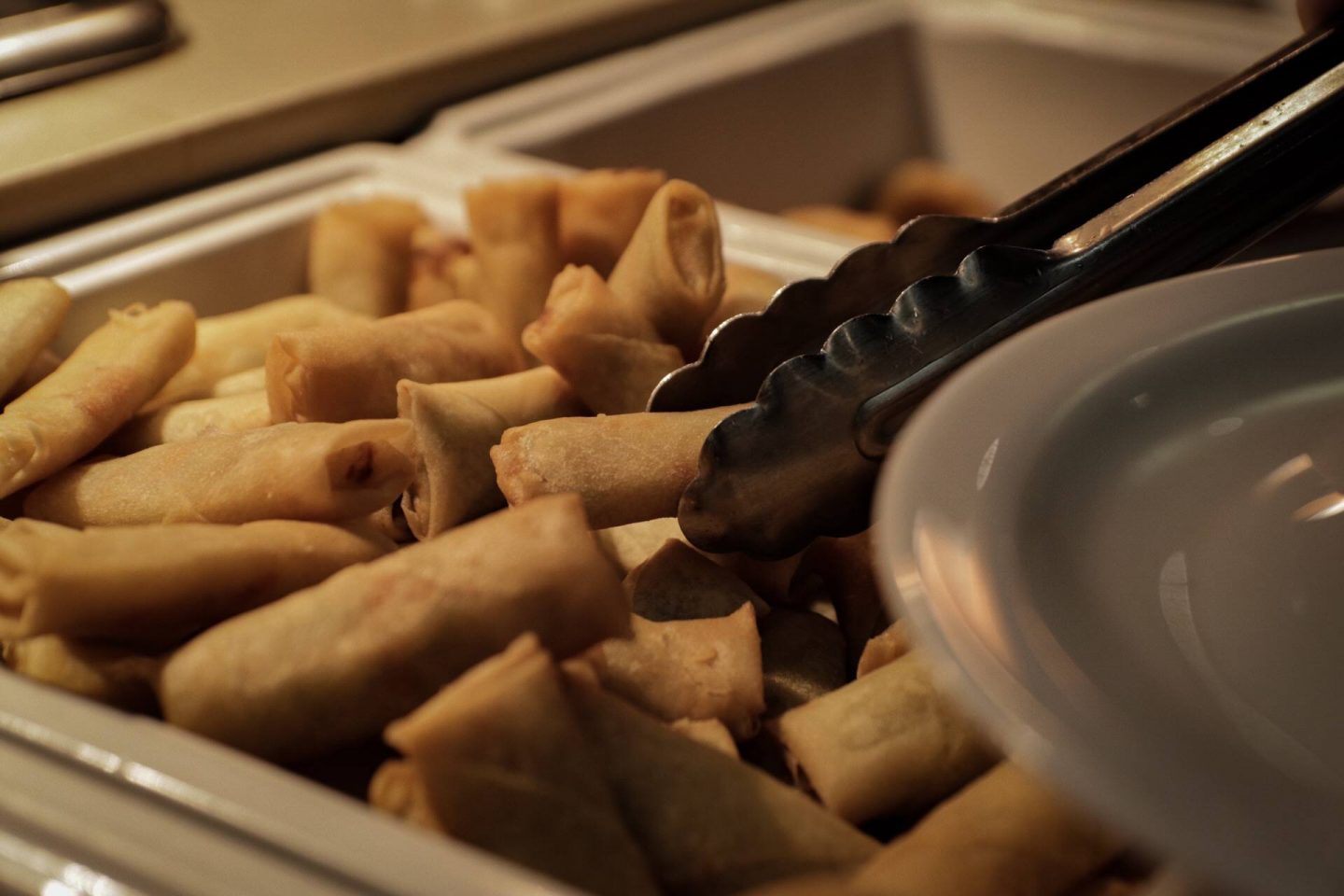 I paired my Teppanyaki scallops with a veggie spring roll, some chicken satay and a prawn toast. I felt this was a traditional starter for an Asian inspired meal although we all know I won’t just be sticking to the World of Asia section.

I loved everything on my plate especially the scallops as these are my most favourite way to start any meal. They’re never usually included in set menus and certainly not at all you can eat buffets so this had COSMO hitting those high expectations that I had gone in with. 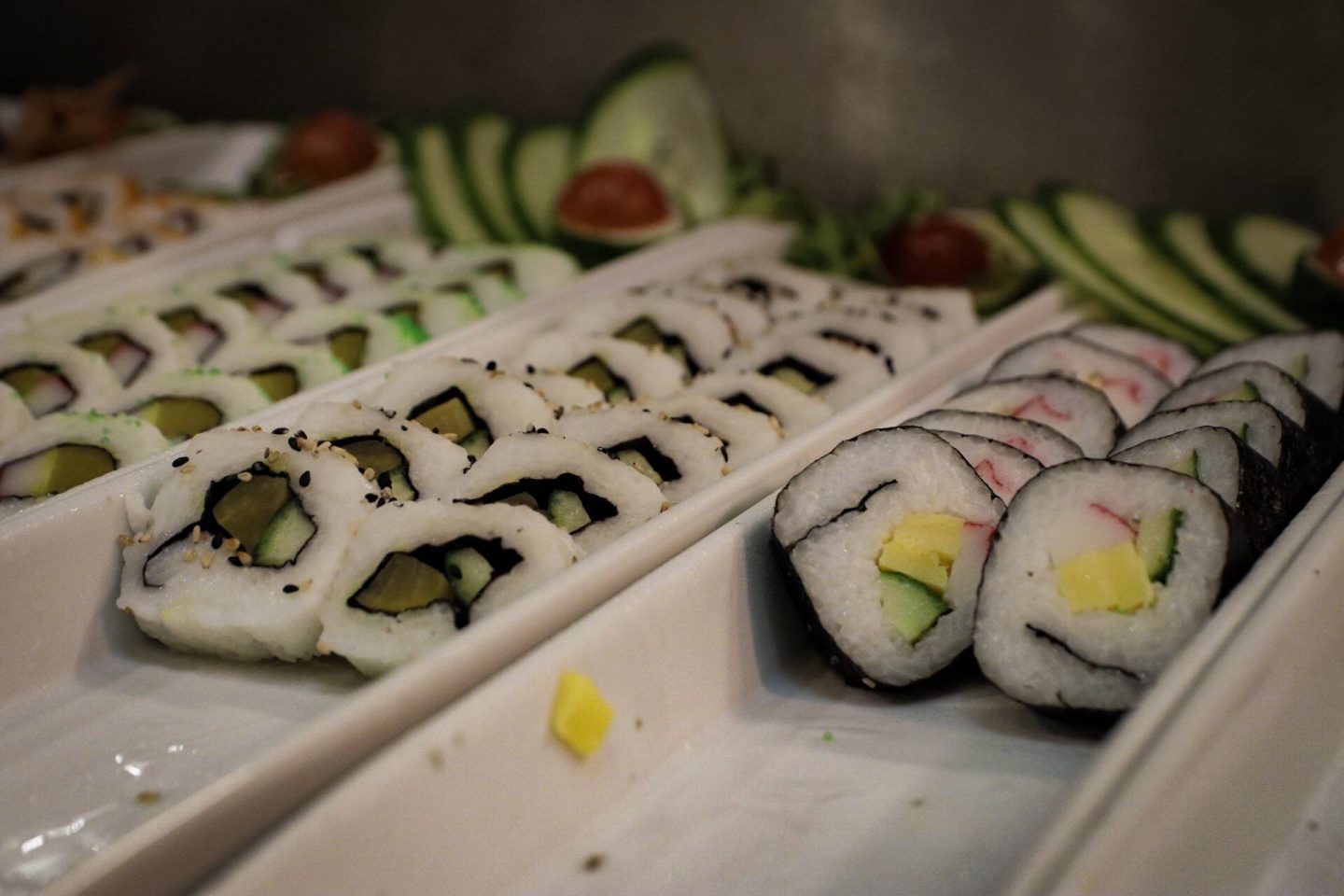 After the starters, I had a small portion of sushi as I was also shocked to see this at a buffet. It was really high quality as was certainly better than the shop bought packets I often grab from supermarkets as a healthier snack option whilst on the go. 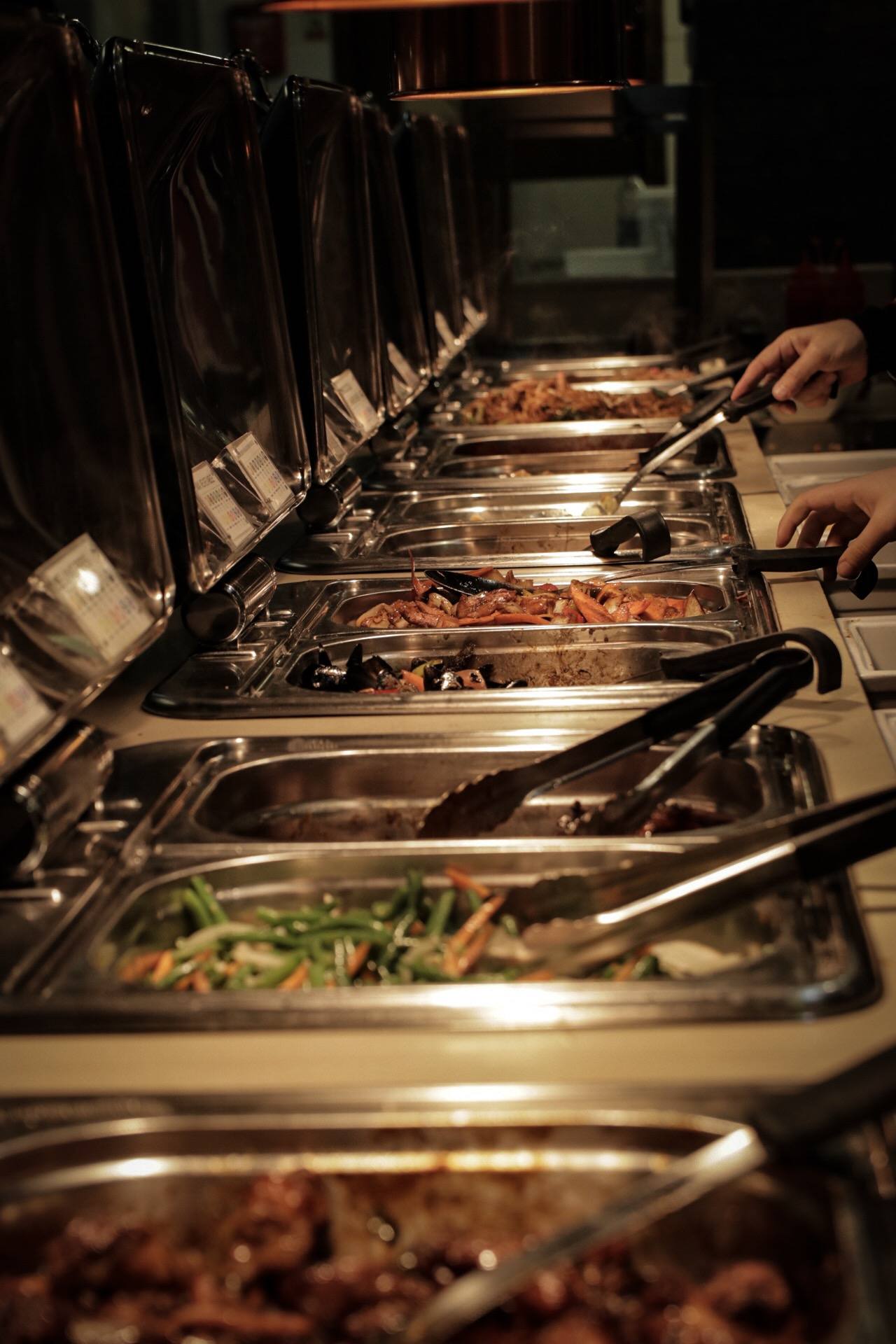 So my appetite had been well and truly wet. Now it was time to dive head first into the huge selection of Asian food I’d been eyeing up since before my starters.

I went for Thai Rice, both Chicken and Beef in Black Bean Sauce, Spicy Vermicelli Noodles and Salt & Pepper Prawns. Not a huge amount, but remember I’m playing this tactically. It was just the right amount to try some of the usuals I’d order when picking a Chinese take away. All of the meats were really good quality and the spicy noodles would be enough to make me return for just a portion of those. 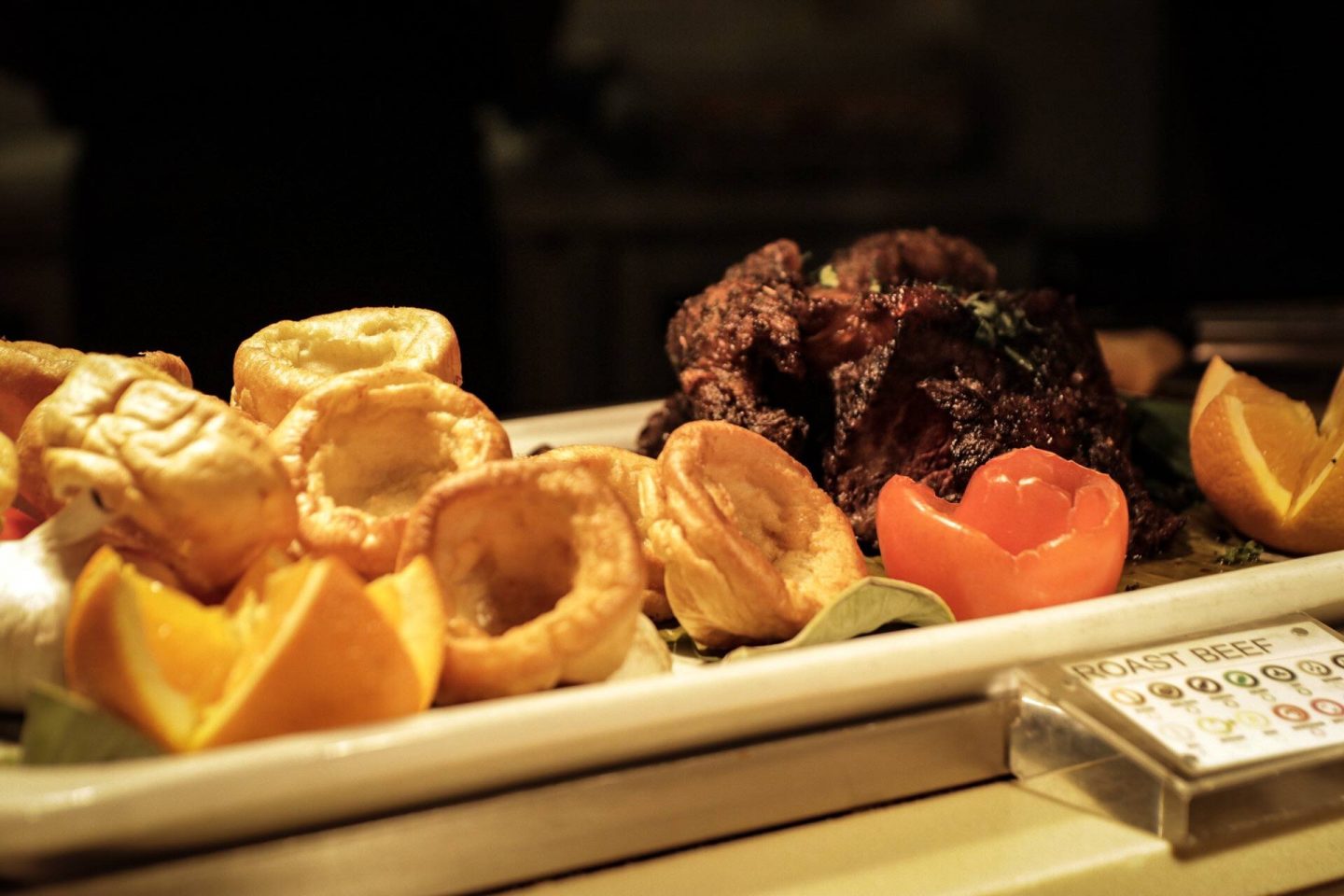 Mike did a crazy one and had a plate of carvery! He had both the Roast Beet and a Chicken Leg with plenty of veggies, but instead of a Yorkshire Pud and some Roasties, he has some noodles which really cracked me up.

His plate was the picture of someone that was really embracing the full ‘eating around the World’ theme that COSMO are so proud of. 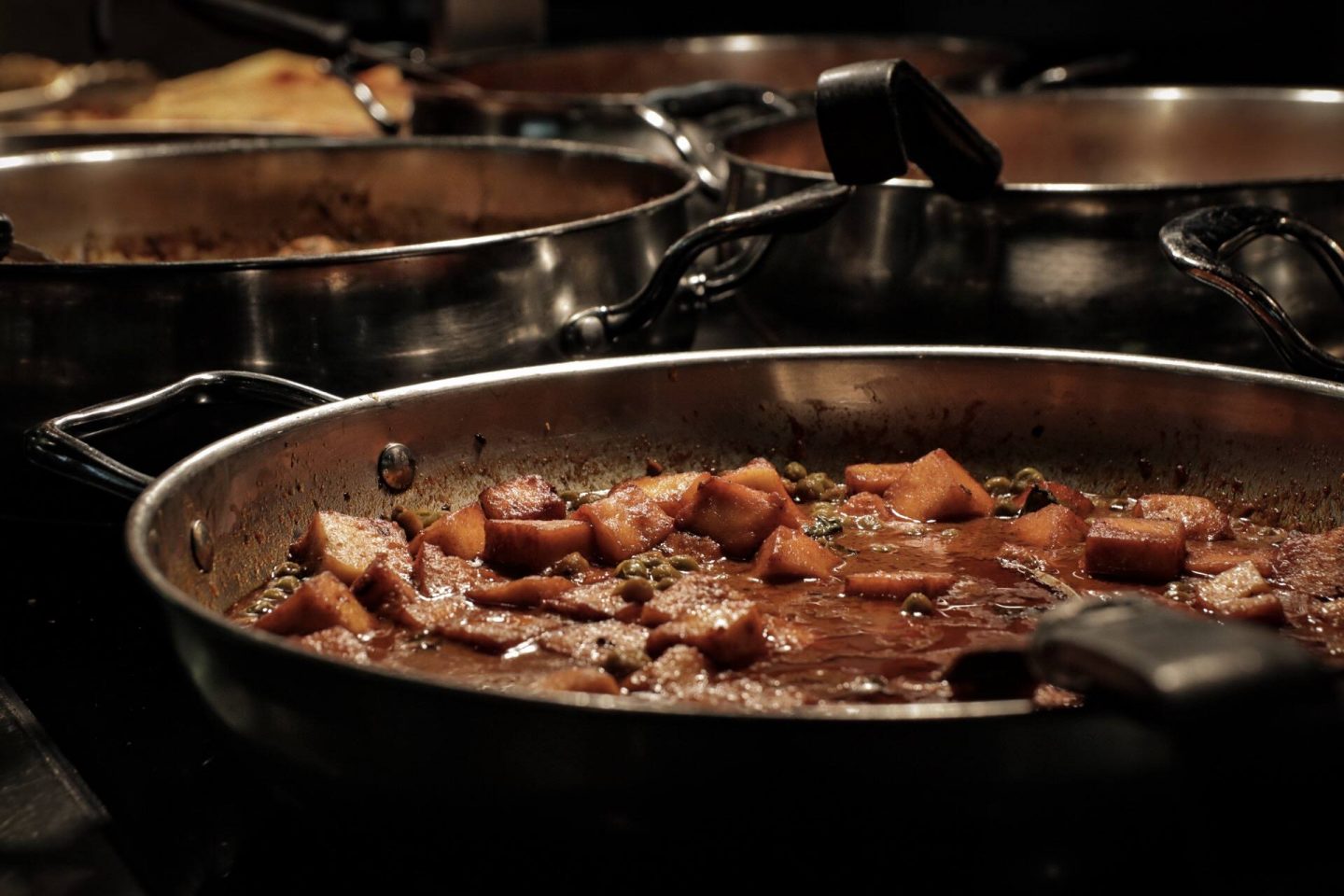 I was slowly becoming defeated but I wasn’t about to let that happen so I grabbed a clean plate and made my way to House of Spice to get some Pea Paaner. I can’t even hide it, Paaner is one of my biggest weaknesses so I couldn’t miss out, could I?

Along with the Paaner, I had a very small helping of rice, and a few pieces of chicken from the Tikka Masala, Tikka and another curry that I can’t even think of right now as I’m back dreaming of more Paaner! This plate had a really good spicy kick to it which I loved. I wasn’t expecting a lot of spice as being a buffet I was worried the spice would be muted down to appeal to a wider range of tastes. I was so glad it was a proper decent choice of curry. Obviously, I mopped my plate up with some Naan bread. 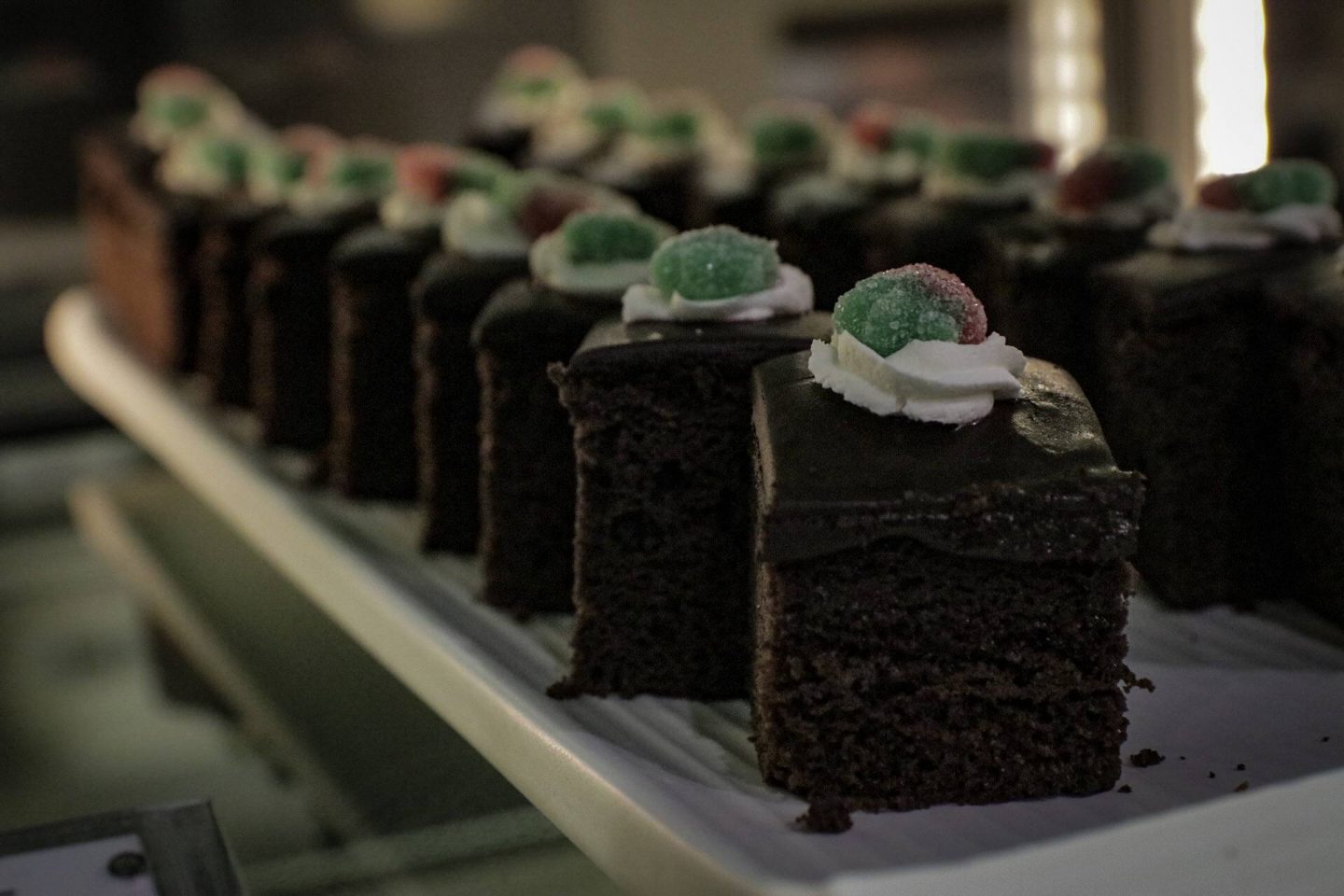 Yes I know I said I was almost defeated but dessert is always a must. I didn’t go overboard though despite the fact there were more cakes on show than in my local bakery.

We both had a little fruit, to cancel out some of the calories. Oh, how I wished it was that easy! I had a Cookies and Cream cake, and some Mango Mousse. Mike also had a few slices of the cakes on offer including the Pecan Brownie.

But hold on to your hats, Mike had never experienced a chocolate fountain before. So, it was kind of a need to stick some marshmallows onto a stick and smother them in chocolate under the fountain. In short, he enjoyed. 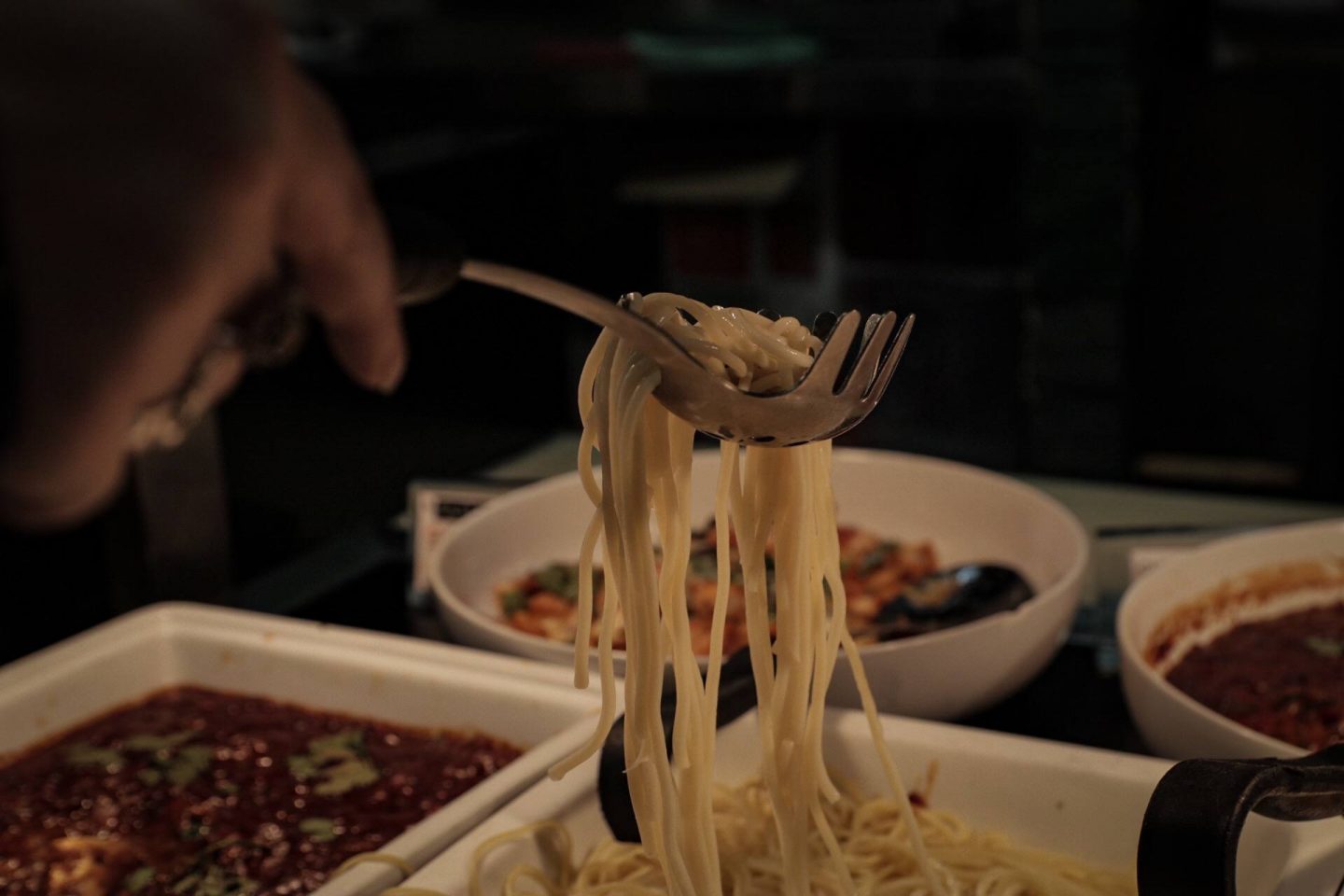 I was really impressed to see so many veggie and vegan offerings including dishes made with tofu, mac & cheese and Margarita pizza. Each dish has it’s own name tag with a key to what’s in it so it makes it really easy for anyone with allergies and different culinary needs. 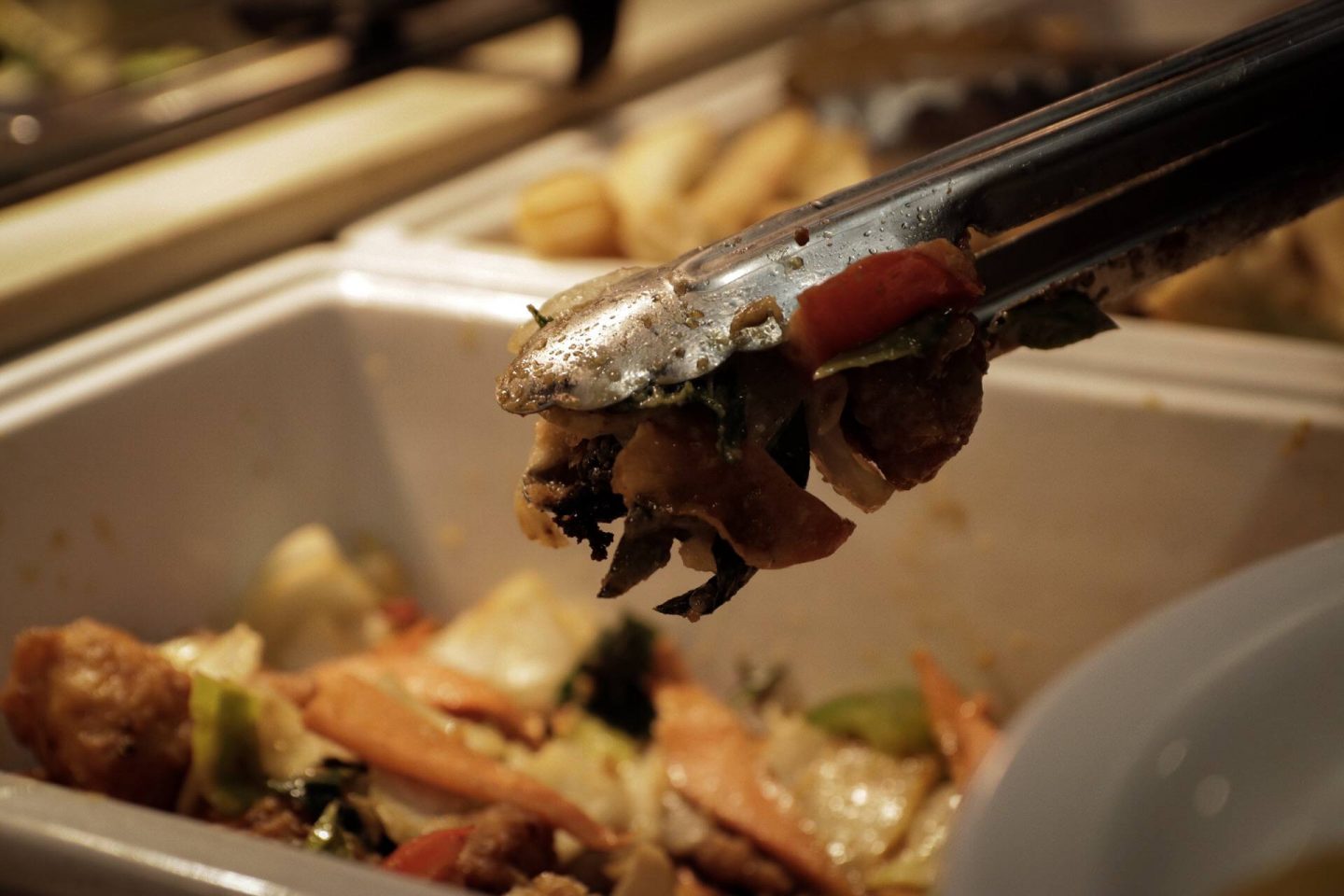 The Service and Atmosphere

We had really good service. Our drinks were brought over really speedily and we were never left with empty plates in front of us.

COSMO was totally buzzing for a Tuesday night from families having a quick bite to eat before the cinema to huge groups celebrating birthdays. Just from where I was sitting I could see balloons for a 10th, a 16th, an 18th, and a 30th birthday so COMSO really does cater for all ages.

The decor is crisp and clean. The noise levels were decent compared to how busy it was as we had no need to shout across the table at each other.

Yes! It’s great value for money and a really easy location for us to get to. Plus it means if I fancy a Wood Oven Pizza, Chicken Satay and some Noodles, no one is going to judge me. 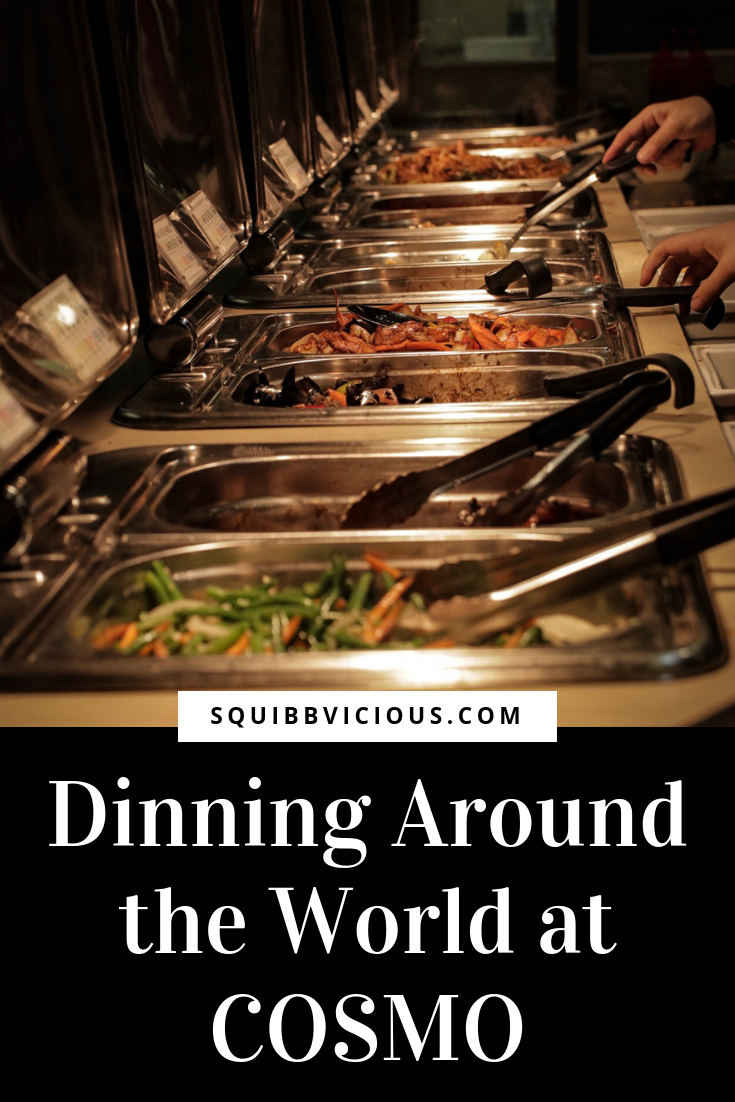