I was very kindly invited to review Inamo Camden with Love Pop Ups London in return for a review.  However, as always, all opinions are entirely my own.

Did you know that Camden has it’s very own Secret Garden? I didn’t either until Inamo invited myself, Jo and Steve down for an explore and some eating!

The Secret Garden can be found through an archway of ivy & fairy lights that leads you towards wisteria covered birdcages and wooden gazebos. There’s plenty of atmospheric festoon lighting overhead for when the sun sets too. It’s a rather cute location, to say the least, so I can see why it’s a TimeOut Love London Double Award Winner or Best Restaurant and Best Place to Drink in the Sun, in Camden! 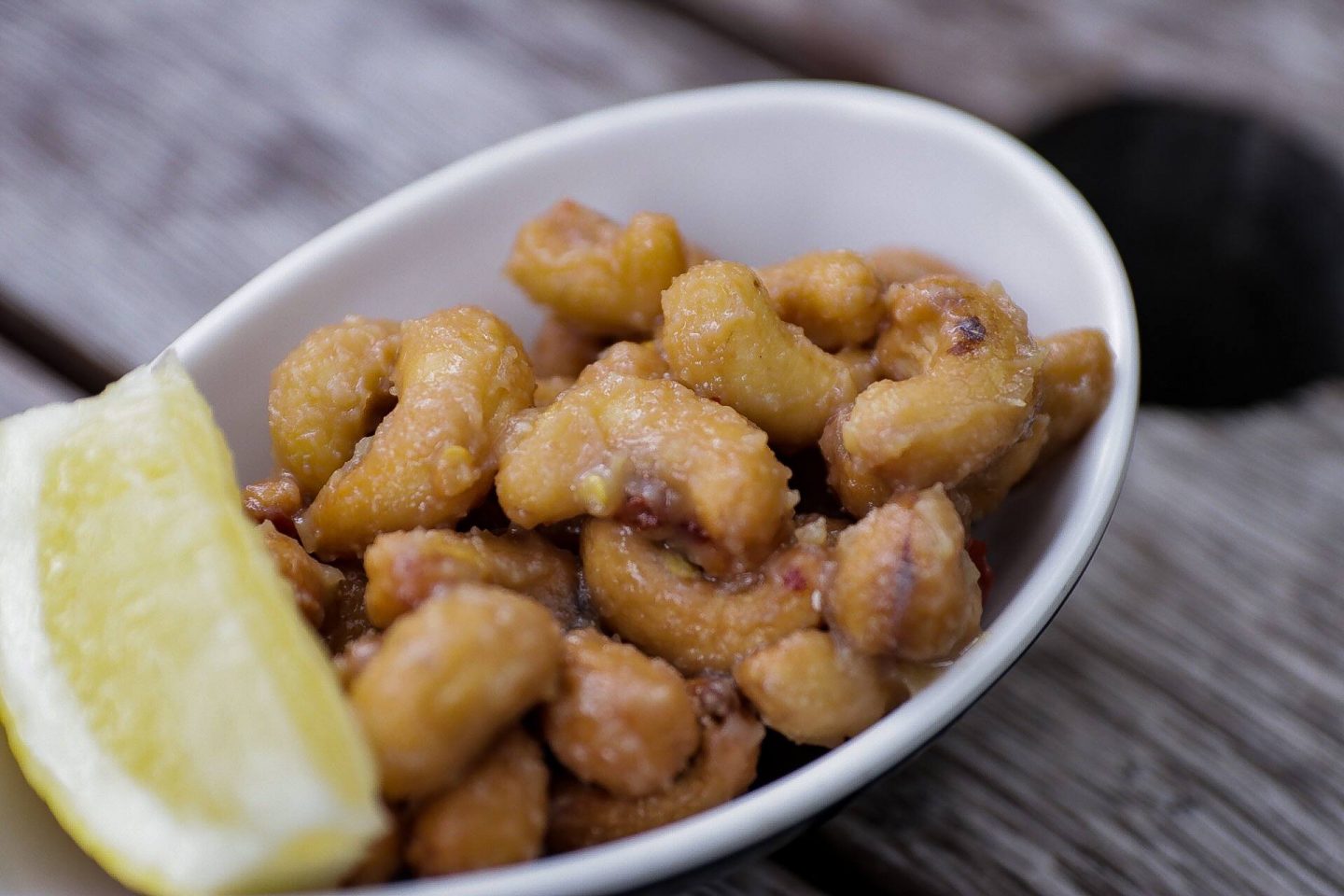 We had ordered the sharing meal for 4 which kicked off with a glass of Brut Mosaique champagne from Jacquart and some rather yummy miso and lime caramelised cashew which went down a right storm with the table! 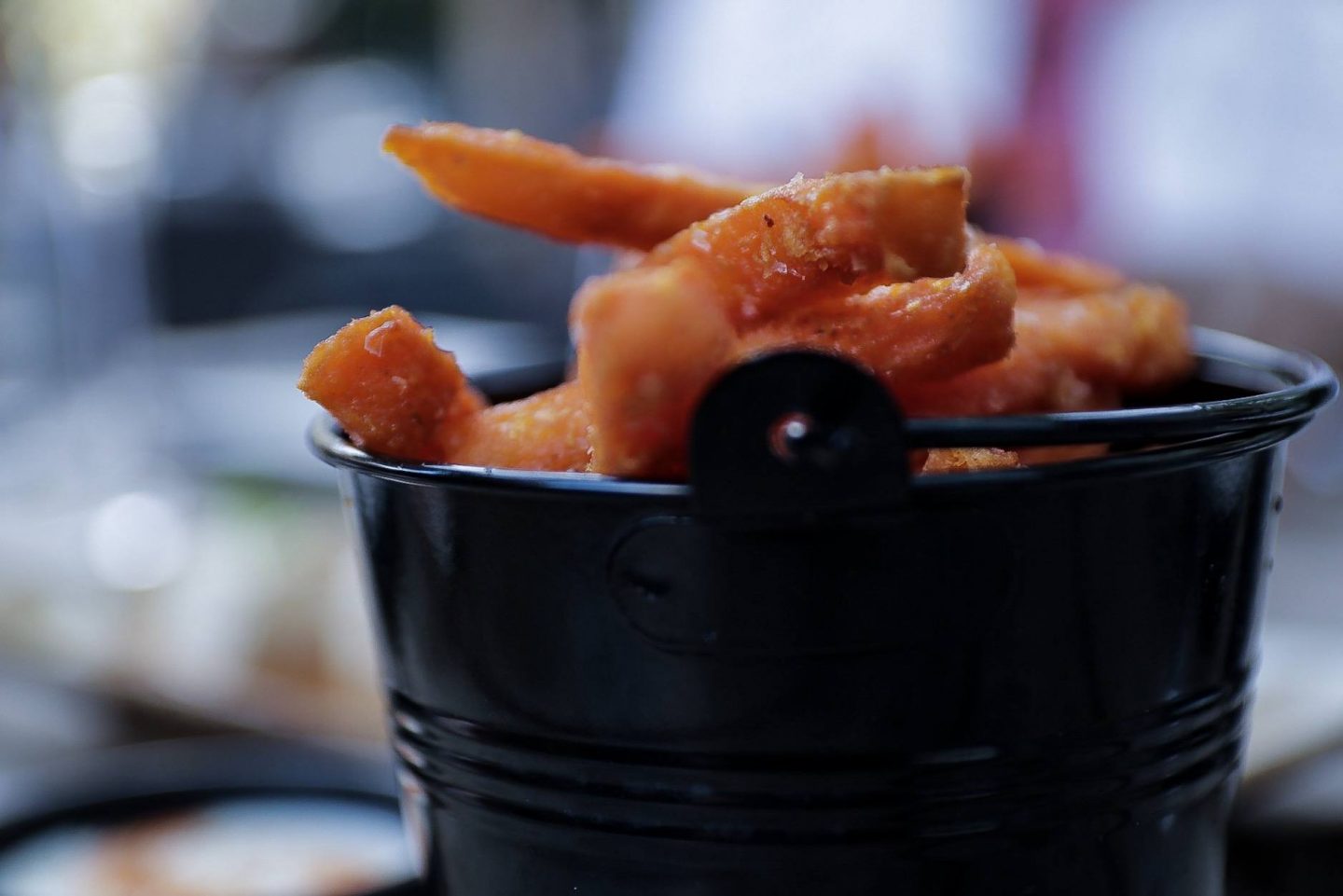 I loved the Sweet Potato & Soba Fries which is a Japanese take on sweet potato fries, with a wasabi mayo dip. The dip complimented the salty fries that were crisp on the outside and fluffy on the inside. 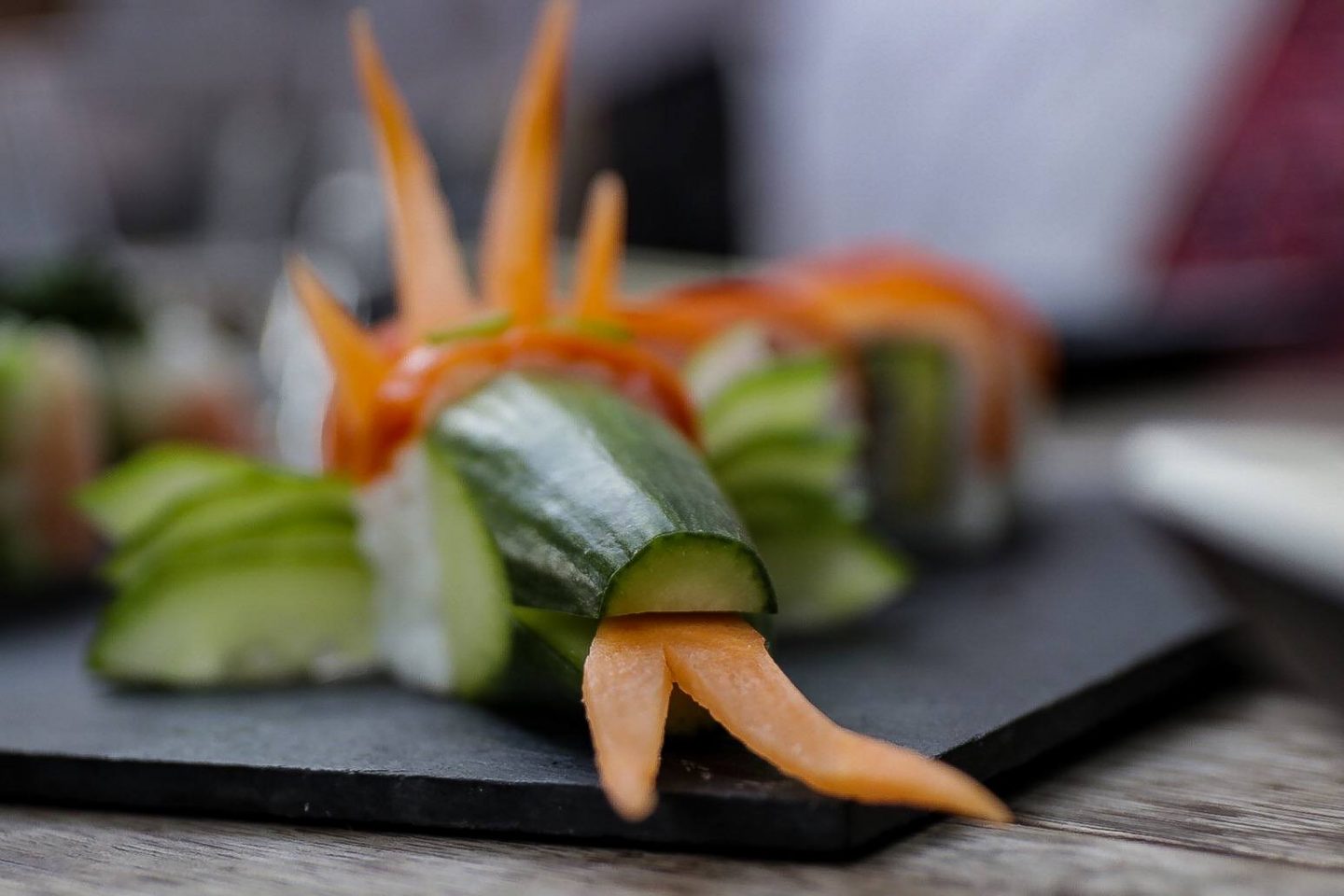 The Dragon Roll which has become Inamo’s signature dish made usually with crunchy tempura shrimp, creamy avocado and a touch of mayo. 8 pieces but we had a salmon version this time around. I love salmon sushi so this suited me perfectly. It was super photogenic too! 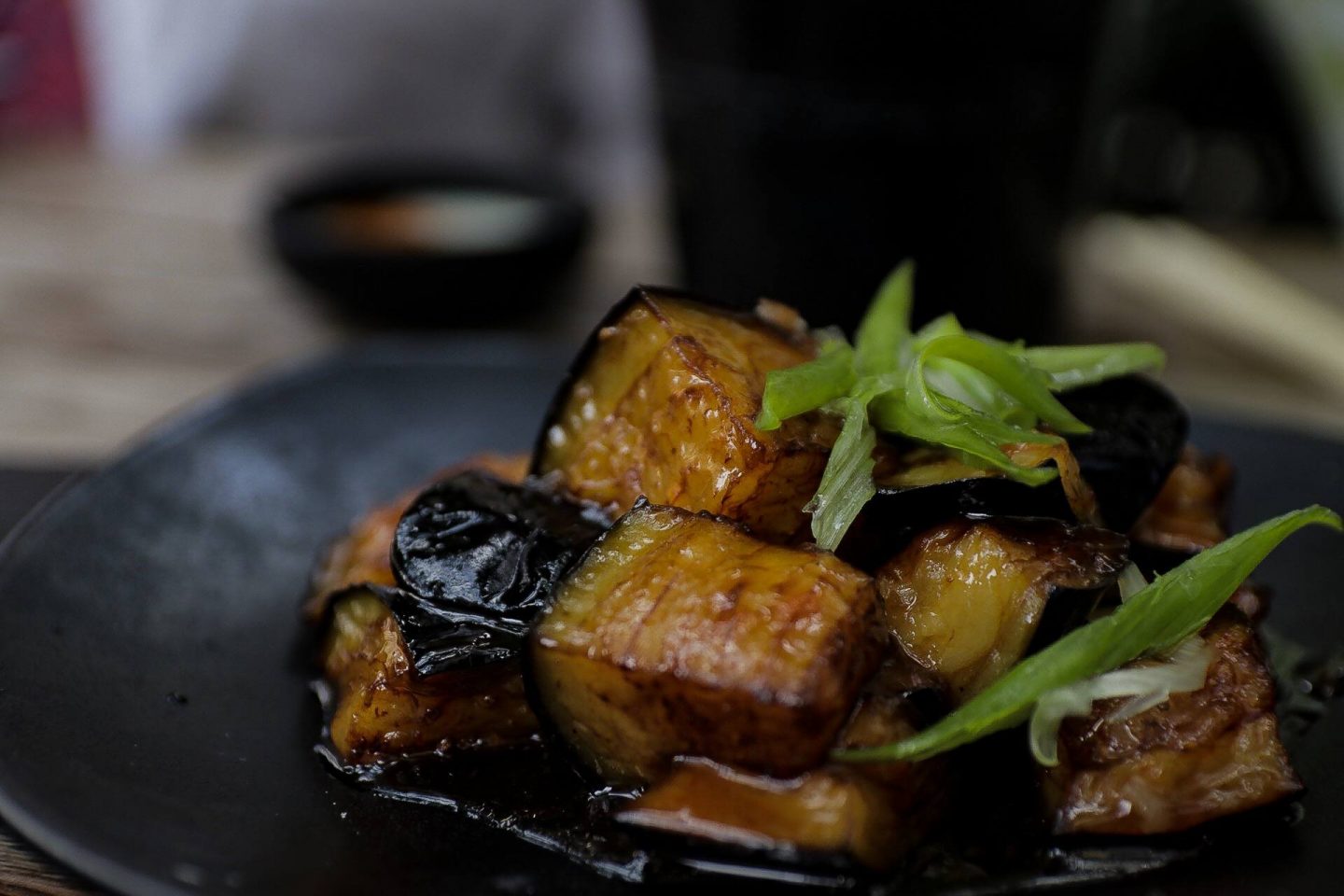 My favourite dish, by far, was the spicy aubergine with spring onion in Thai sweet chilli sauce. It all just complimented each other so well and I’d order this for sure when I next go to Inamo. My second favourite, which is something I usually order, was the vegetable gyoza. They were just crispy enough for my liking. 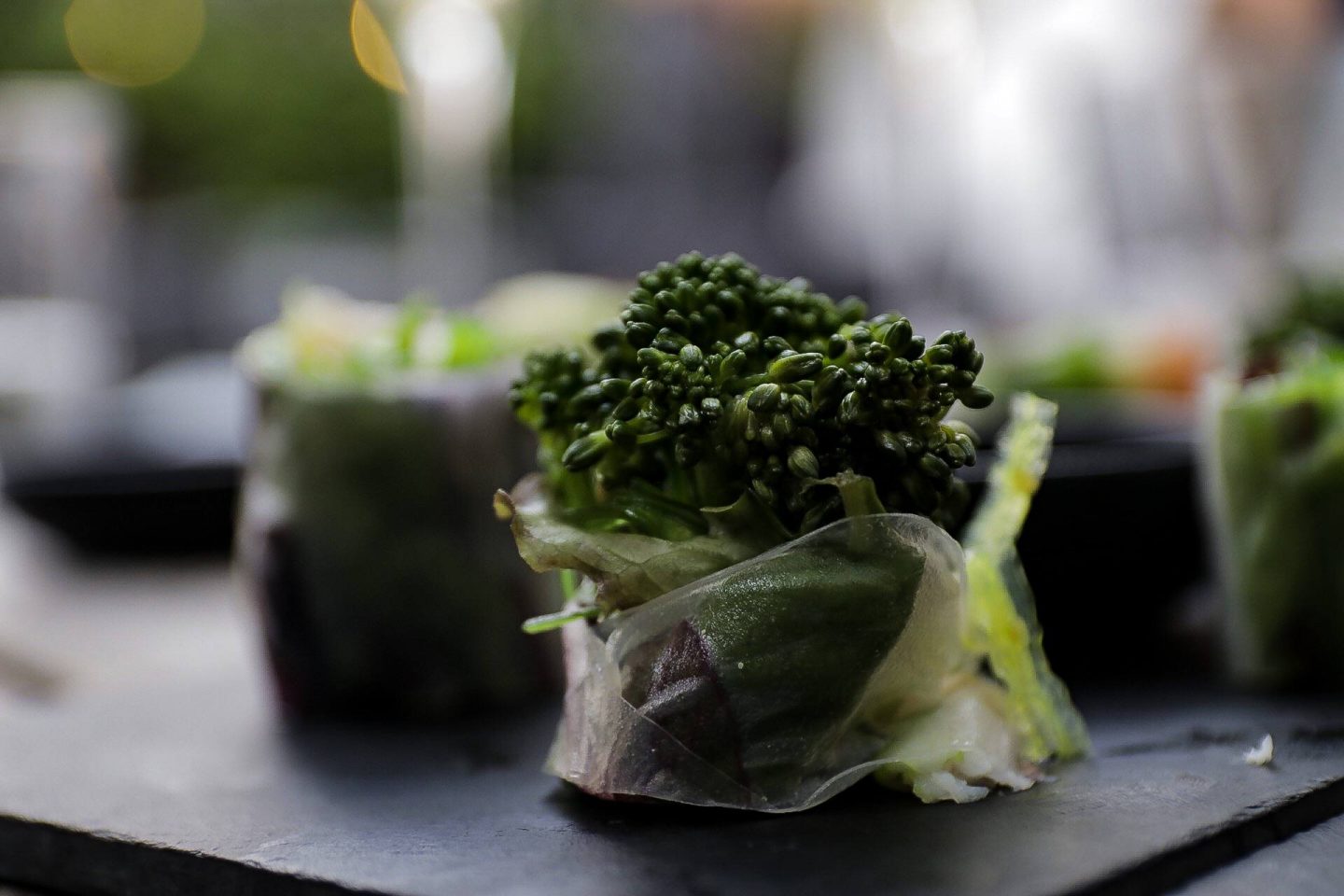 The Summer Roll made with Prawn, broccoli, mint, cucumber, and mixed leaves, in rice paper, served with wasabi yuzu soy dressing was probably my least favourite of all the dishes due to my huge dislike of mint but I did enjoy all of the different textures. 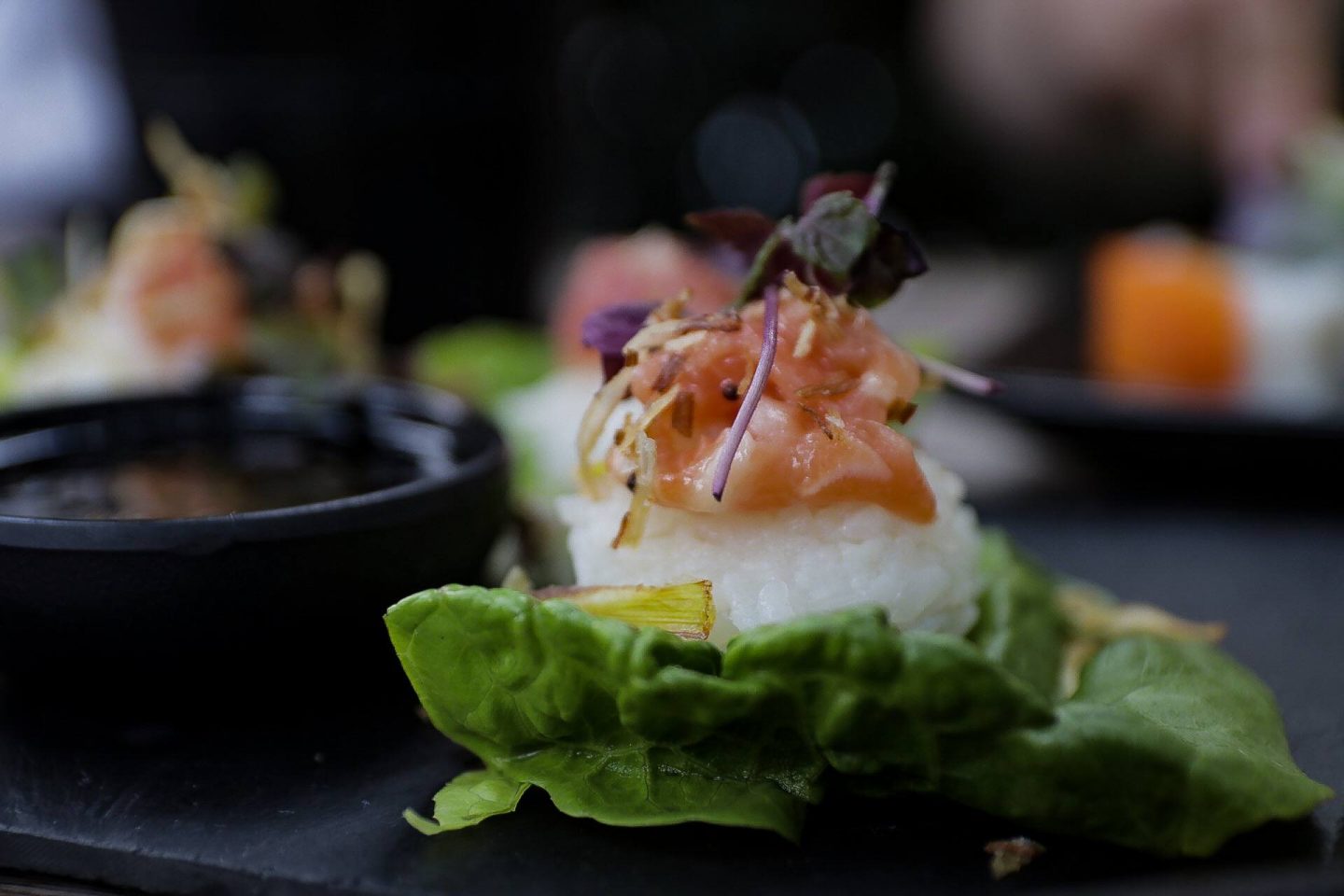 The Sushi Bites were made with Scottish salmon & fresh tuna on a bed of baby gem leaves, with tobiko and wasabi yuzu soy dressing. The combination was a great way to try a couple of new types of sushi. I do usually order salmon or tuna dishes but had never had or seen this style before! 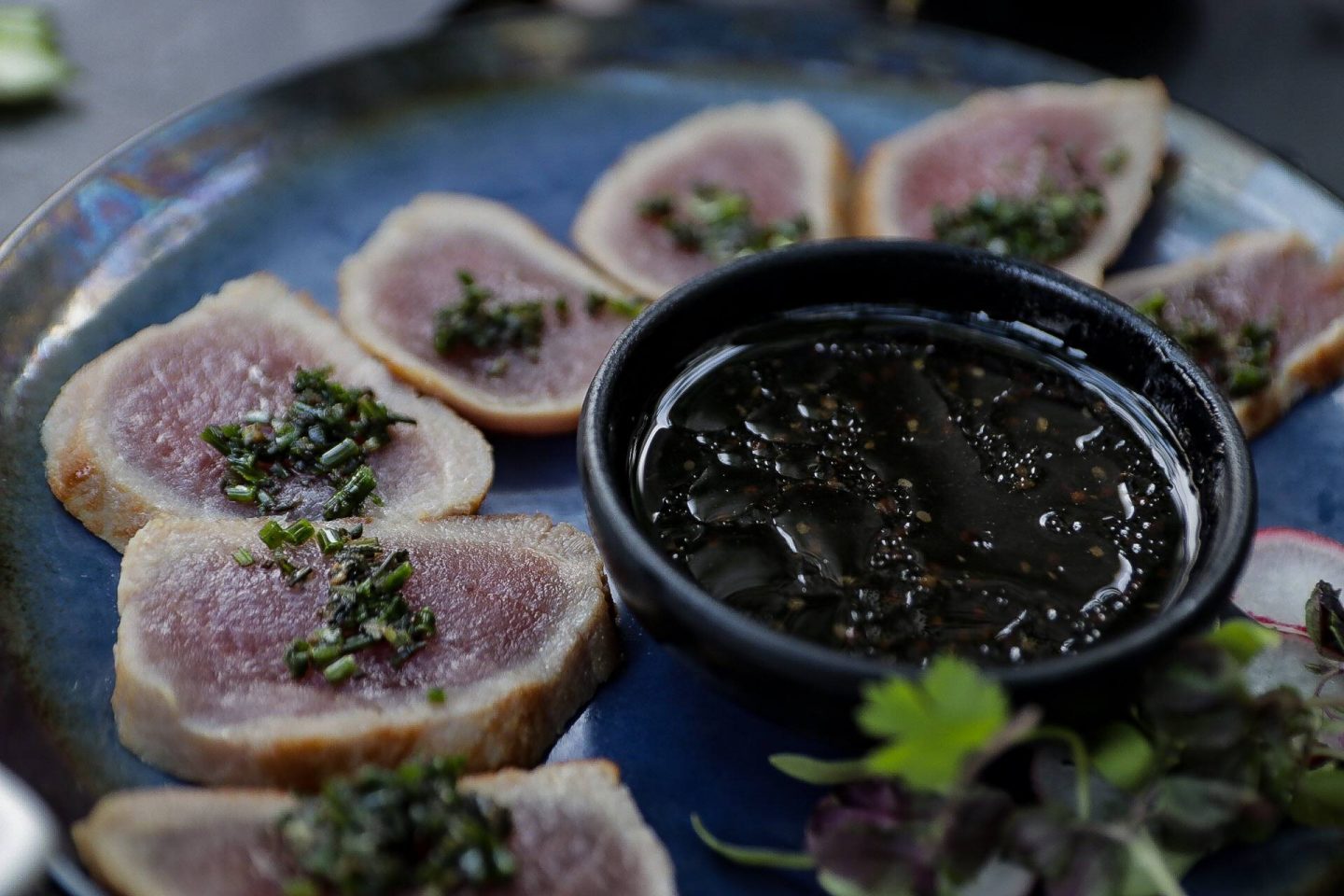 The Tuna Tataki with Salsa Verde was made with seared black pepper tuna served with salsa verde, fresh radish, and wasabi yuzu soy dressing and was so good. It was quite a heavy dish and made a nice change to all of the sushi that is served with rice. It was seared perfectly too! 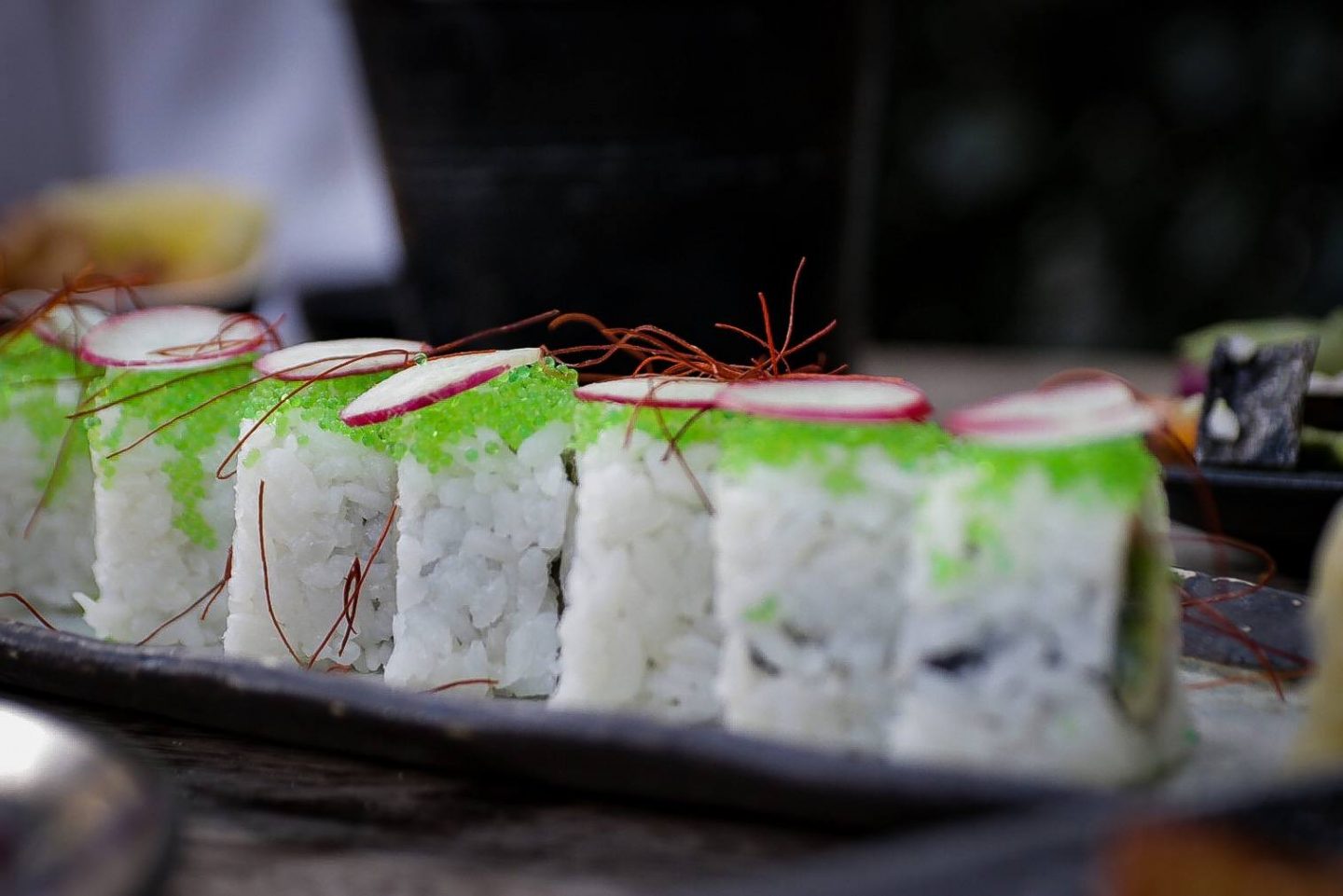 Yellowtail Roll which was a roll filled with Yellowtail with cucumber and spring onion, topped with tobiko & togarashi. These looked just as awesome as they tasted. I’d never had Yellowtail before and it’s something I would certainly consider ordering again as I really enjoyed these. 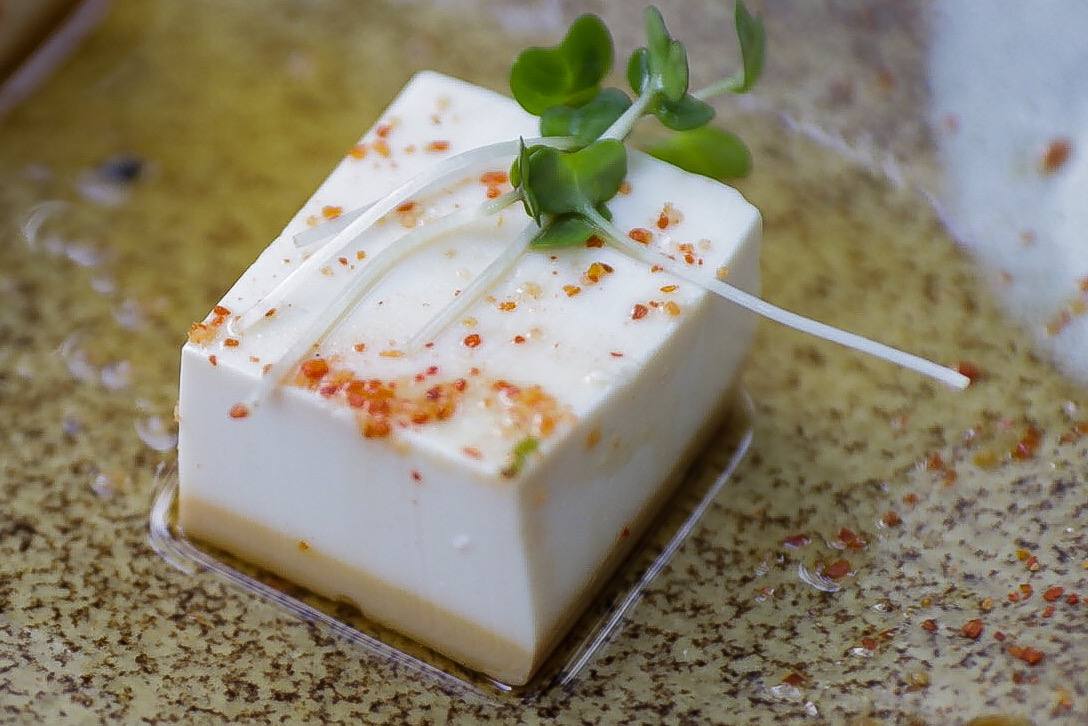 I’m not one for eating much Tofu but the Chilled Ponzu served with mustard cress, ginger and ponzu dressing was really tasty. It had just the right amount of seasoning too. I’d order this again for sure too! 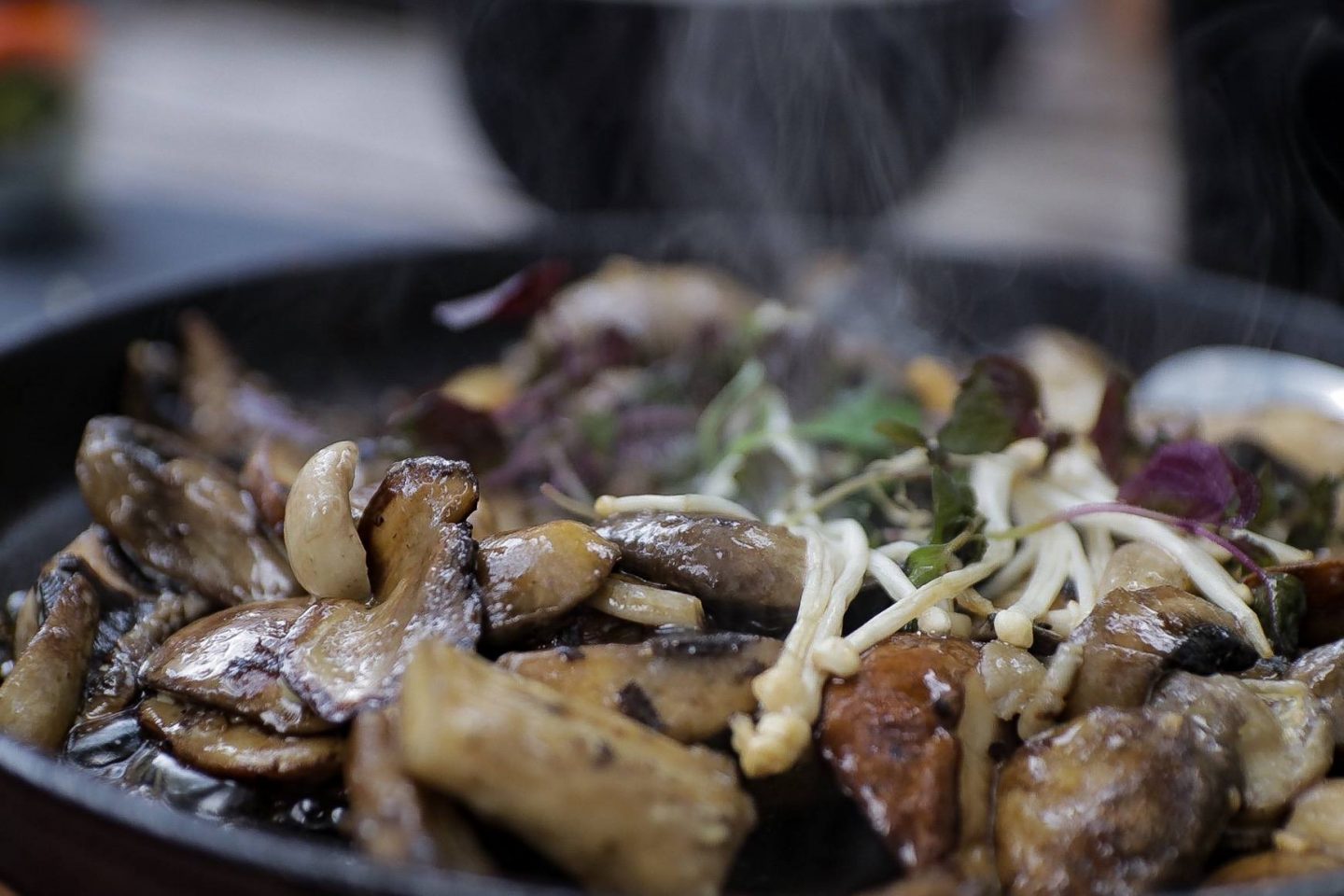 Sadly the Sizzling Mushroom Toban Yaki which was a mix of shitake, shimiji, enoki, chestnut, field, and button mushrooms in with a sizzling soy mirin glaze didn’t quite live up to my expectations. I bloody love mushrooms and soy but not quite sure they worked together for me within this dish! 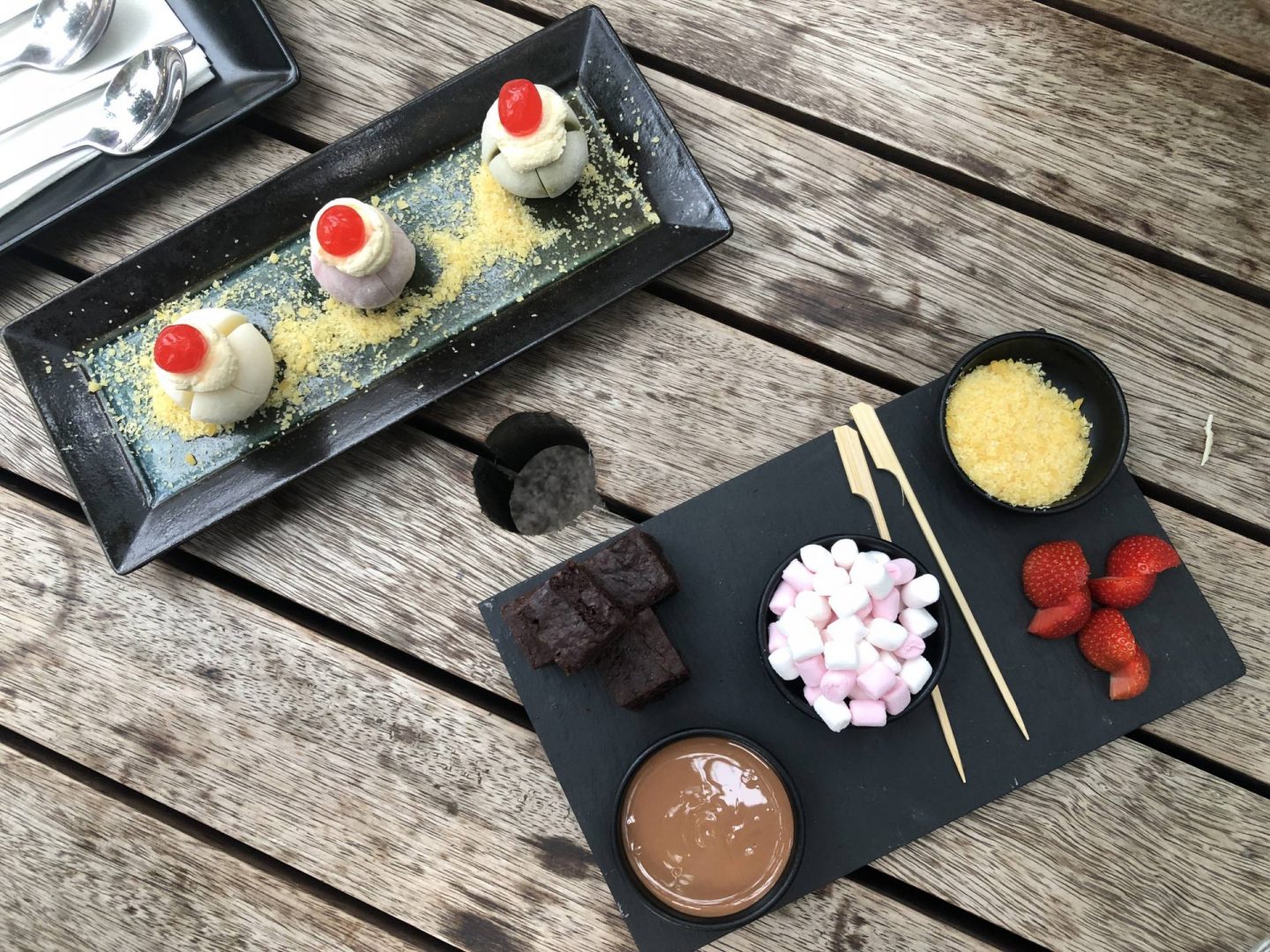 We finished up with sharing Mochi which is Japanese ice cream in raspberry, matcha and vanilla flavours. The Mochi always wins me over with it’s texture and the raspberry one is always my favourite whenever I have them. We also had a Chocolate Fizz Fondue that was served with Strawberry, Marshmallow and Brownie pieces. We had plenty of melted chocolate and popping candy to dip which got us all giggling away with how messy we all got!

I really enjoyed trying this menu as so much of it was vegan, and the rest either veggie or pescatarian, which is something I really enjoy eating at the moment.

The atmosphere was really nice, despite the threat of rain that was overhead for most of the meal! I’d certainly recommend an evening at Inamo’s Secret Garden even if it is just for drinks!

Getting a Bit Nutty for Special Celebrations…