How to Put on the Perfect Afternoon Tea Party

The lovely team from over at Silver Mushroom have kindly offered to share their tips for the perfect Afternoon Tea Party.  Afternoon Tea Week may be coming to an end but that’s no excuse to not make your own!

There’s a rumour about Britain that spreads across the world, that at half past midday, everything stops for tea. Whilst this may no longer be the case today, we’ve still maintained our love for this quintessentially British tradition. A tower of sandwiches, mini cakes and of course a large pot of tea; this high-fashion afternoon treat has evolved over the years.

As Britain celebrates Afternoon Tea Week, what better time to look back at how this tradition came to be?

While many are unable to cast their mind back to a time before selfies and spiralizers, we need to go much further back in time to trace the origins of the afternoon tea phenomenon.

It all started with Anna, the 7th Duchess of Bedford who simply couldn’t wait for her evening meal. Back in the day it was common for people to only have two meals a day; breakfast in the morning and dinner served as late as 9pm.

Can you imagine completing a full day’s work on only two meals a day in 2015? No wonder Anna described a ‘sinking feeling’ around midday that prompted her to indulge in an afternoon snack. What started with a pot of tea and buttered bread in her private quarters soon spread out into the summertime sun. Inviting her friends to Woburn Abbey, her afternoon tea soon became quite the social affair.

As many other socialites hosted their own afternoon tea gatherings, the craze swept the nation. It was so popular that it soon became respectable enough to be bought inside the drawing room, cementing itself as a British tradition. 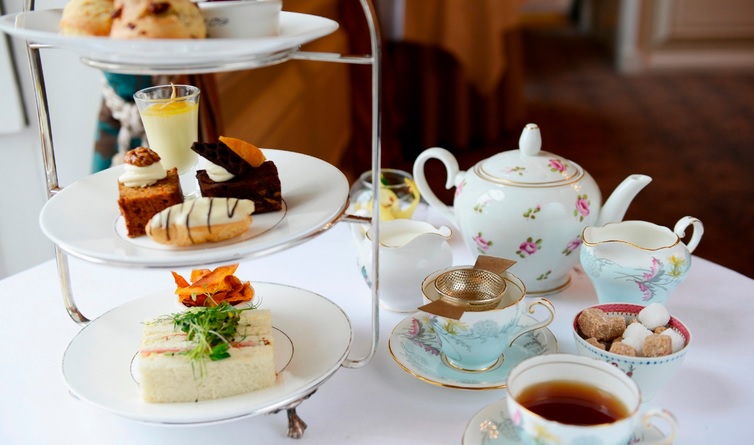 What tea should you serve with afternoon tea?

Nothing beats traditional English tea, served with a dash of milk and of course no sugar! This isn’t a builder’s brew we’re serving after all. For afternoon tea you’re supposed to appreciate the flavour of your cuppa and you certainly don’t need a refined palate to appreciate the taste of a well-made cup of tea.

In modern tea rooms, a pot of Earl Grey can also sometimes be served. With gorgeous floral and citrusy notes from hints of bergamot, Earl Grey is a real treat! If you’re looking for a fancy alternative to your standard English tea, Earl Grey is a welcome choice. 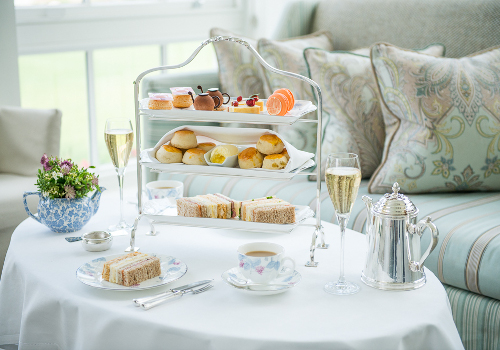 How to host the perfect afternoon tea party

Cucumber sandwiches may not be in vogue these days, but they were the height of sophistication once upon a time. A popular choice for afternoon tea, you must thinly slice the cucumber to ensure your bread doesn’t go soggy! In fact, you could also remove the core if you’re particularly averse to wet bread.

Other traditional afternoon tea sandwiches include ham & mustard or egg & cress. However, changing trends have shaped what goes on our plates over the years and there’s no shortage of options for those who want to do something a little different with their butties.

Roast beef – Harking back to thrifty times, using your leftover roast to fill your sandwiches was a perfect way to treat yourself on a budget when times were hard.
Coronation chicken sandwiches – Fuelled by multiculturalism, curried mayo, raisins and chunks of chicken which celebrated Britain’s foreign trade industry.
Cheese and pickle – Often fondly referred to as a cheap ploughman’s, cheese and pickle has become a vegetarian favourite.
Salmon and cream cheese – A much more modern choice, smoked salmon is a real touch of luxury! Add in chives for a subtle twist.Finish your cake and sandwich stand off with a hefty-sized scone for each of your guests, accompanied with a pot of clotted cream and strawberry preserve. Just don’t ask your guests how to pronounce the word ‘scone’ and your afternoon tea will be a total success! 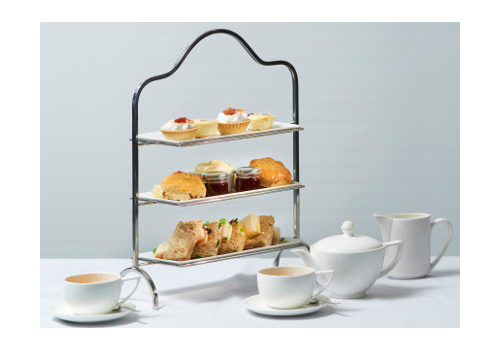 The famous quote from The Colour Purple by Alice Walker says it all really: ‘Tea to the English is really a picnic indoors!’ Have fun, but remember you’re in public. This sophisticated affair is the perfect way to catch up with old friends and colleagues, but it’s certainly no knees up!

There are three simple rules to follow when hosting or attending afternoon tea:

1. Fold your tea, don’t stir it! Bring your spoon from a 6 O’clock position to a 12 O’clock position and bring the liquid up with your spoon. Try not to move your spoon too vigorously, you wouldn’t want to clink your cup with the spoon – that will never do!
2. Don’t force your pinky out. Once upon a time, people used to outstretch their pinky to help balance their cup. There is no proof that this works. This is 2015, so tip your cup however you wish – pinky or no pinky!
3. Tea first, milk after. Only put the milk in first if you’re using vintage china, as the boiling water may chip or crack the teacup. Using this method in your standard mug is simply a crime!

To put on the ultimate afternoon tea party, you’ll need to ensure your serving ware is fit for the occasion. It’s particularly important to have some traditional cake stands on your table, and you can find some of these here.

What to Consider When Choosing Accommodation in…

How Hiring a Car Saved our Holiday!…