You all know I’m forever on the hunt for the most quirky things to do in London and I’ve recently found one that totally won me over; Dining in a Victoria Line Carriage! No, it’s not moving and yes, it’s very spacious… for once! It is a real Victoria Line carriage that is obviously no longer used that has been stationed at The Pump House Museum in Walthamstow.  I always think that Walthamstow is super far to get to but I’m always wrong, it’s is 5 mins walk from St. James Street Station on the Overground from Liverpool Street and 15 mins walk from Blackhorse Road Station which aptly enough is on theVictoria Line. There are also plenty of bus routes that serve the area including on that comes in from Stratford. 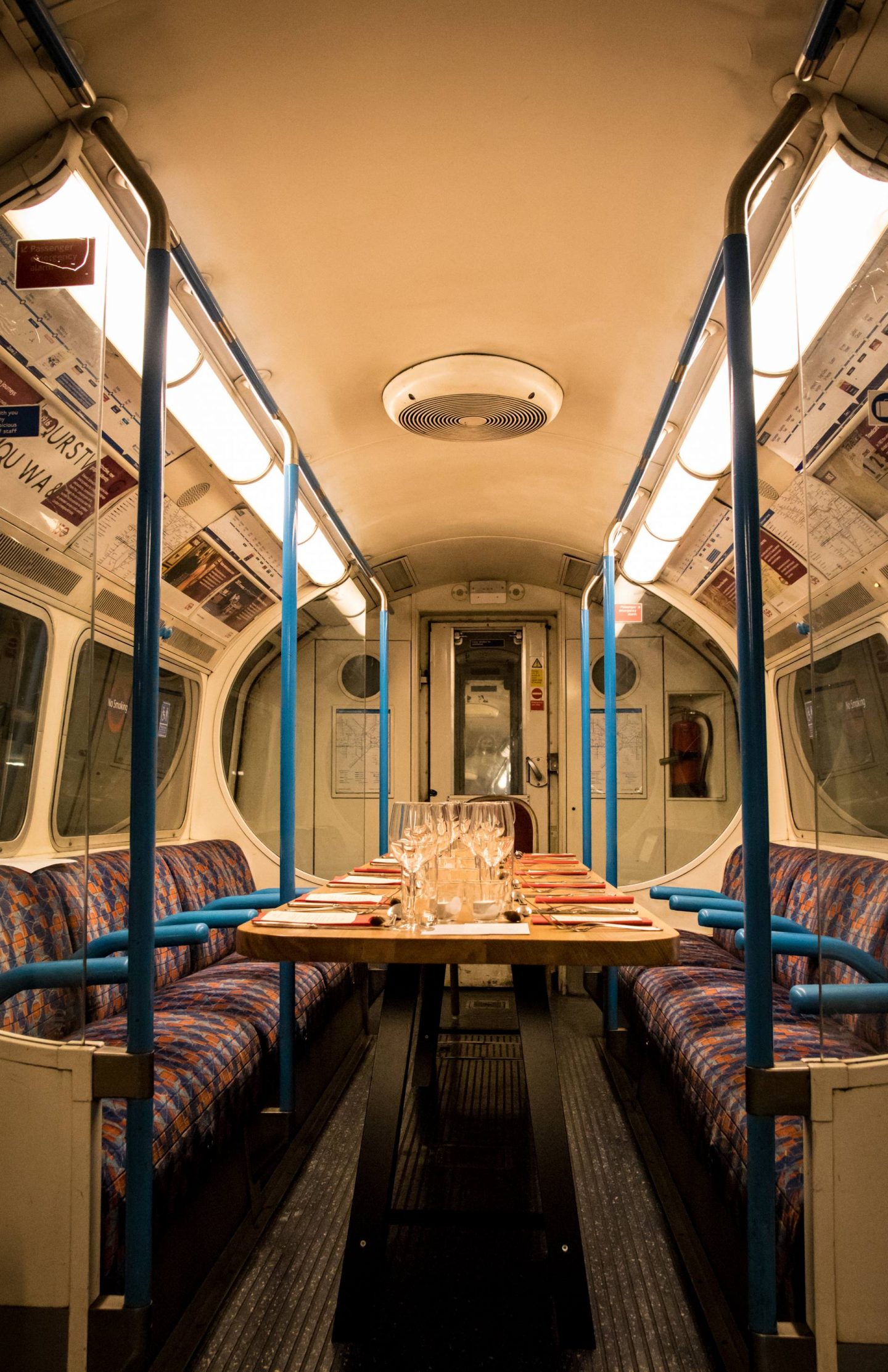 The carriage itself is just outside of the museum and looks just as it would if it were still in use today… well apart from the addition of a few tables! We were sat on the larger supper club style table with the rest of the guests that were booked in that evening which was lovely as I do love to chat to new people! There are smaller two-seater tables available should you wish for a more exclusive style of dining, but we all know how much of a fan of a supper club I am these days after experiencing my first earlier this year! 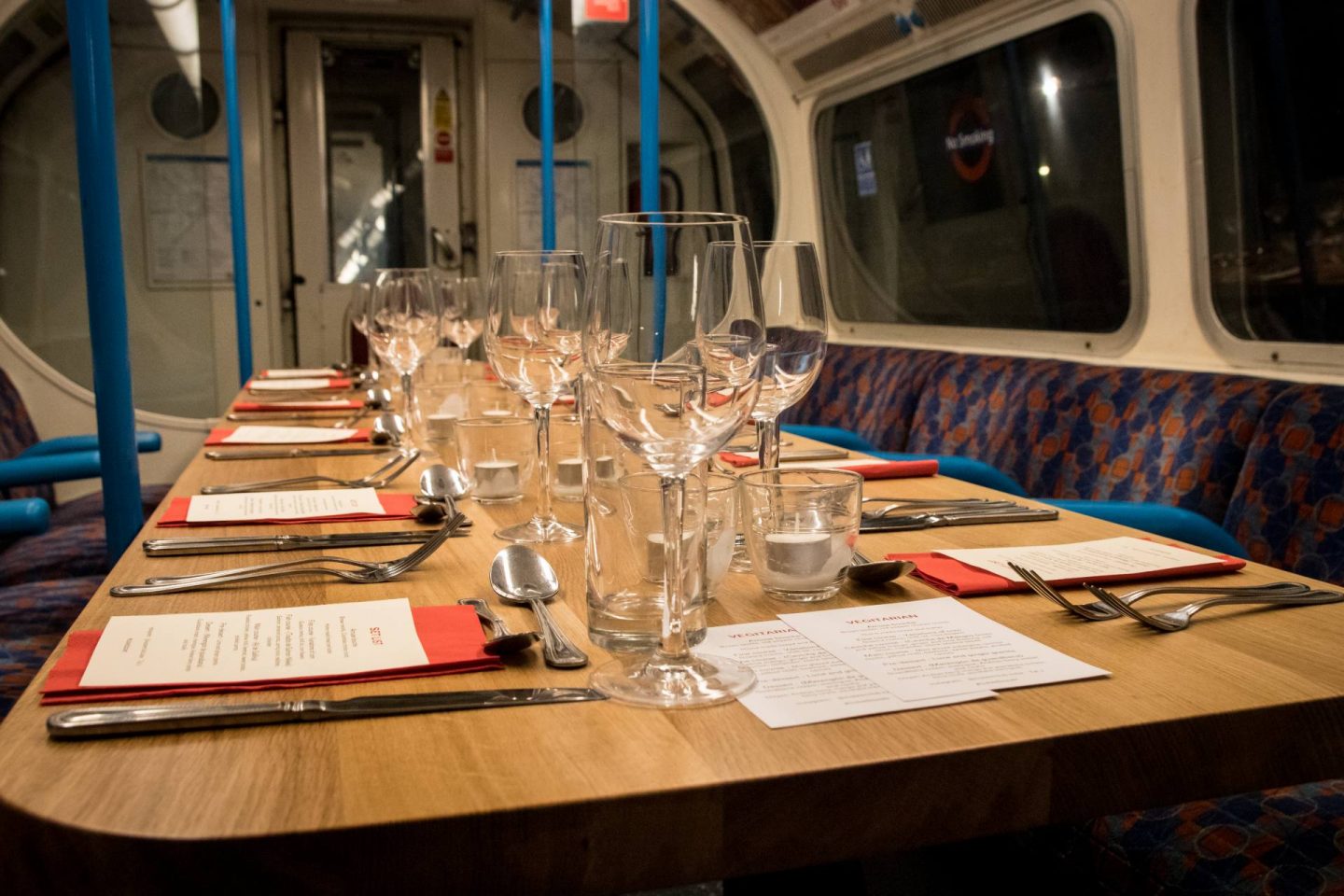 When we entered the carriage, we enter from the front through the driver’s cabin and I felt like a naughty school kid that had trespassed somewhere they weren’t meant to be as you could see all of the buttons and screens! During the summer the usual passenger doors are open to let a breeze through but as we were there in the winter, the carriage is kept closed up to keep in the warmth! 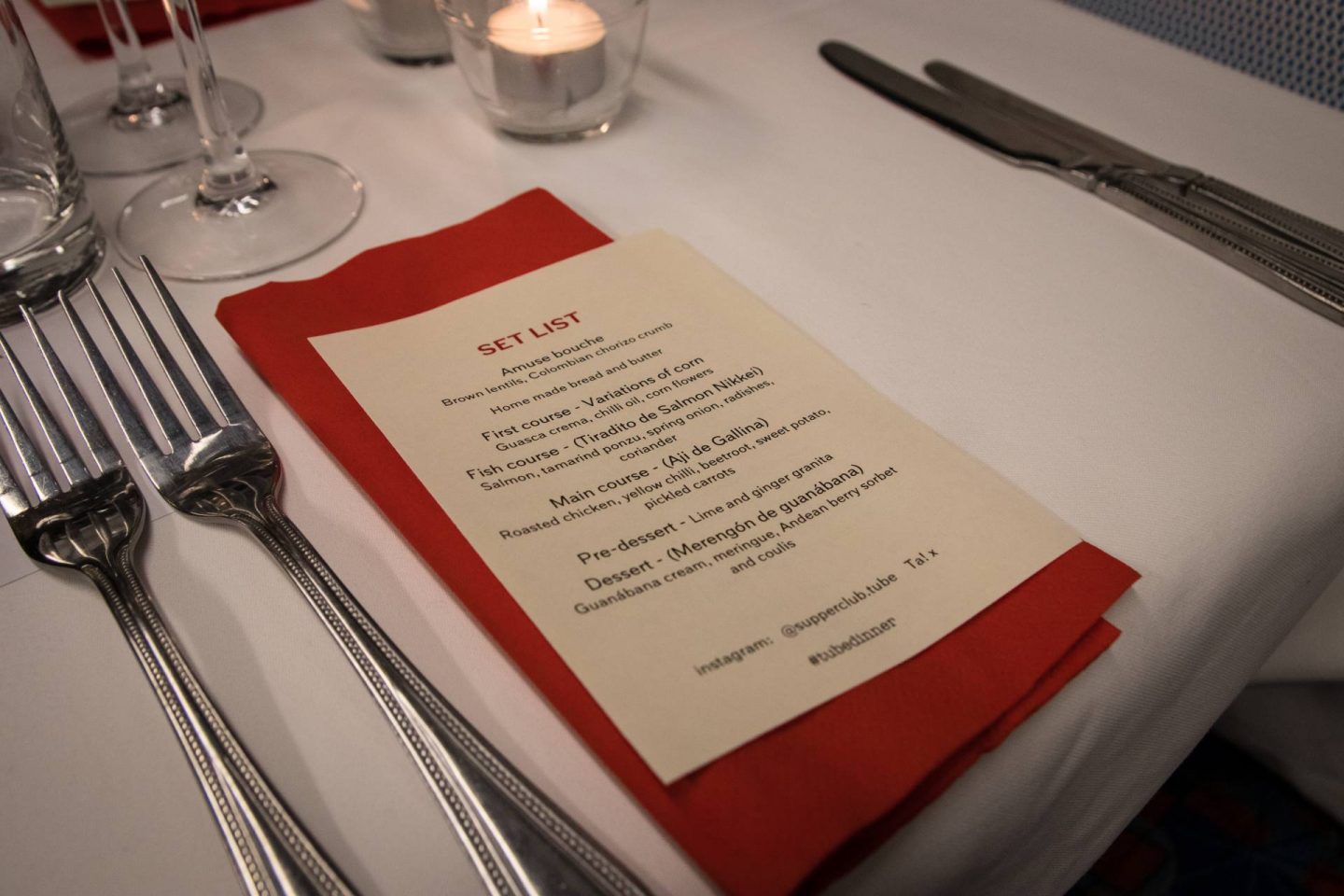 Our menu for the evening was divine and I was so looking forward to trying as soon as I had laid eyes upon it. Head chef Beatriz Maldonado Carreño, known more affectionately as Bea, originally hails from Bogotá in Colombia. She has been creating wonderful food in London for over 10 years now and this is her latest quest to add to her rather extensive CV. 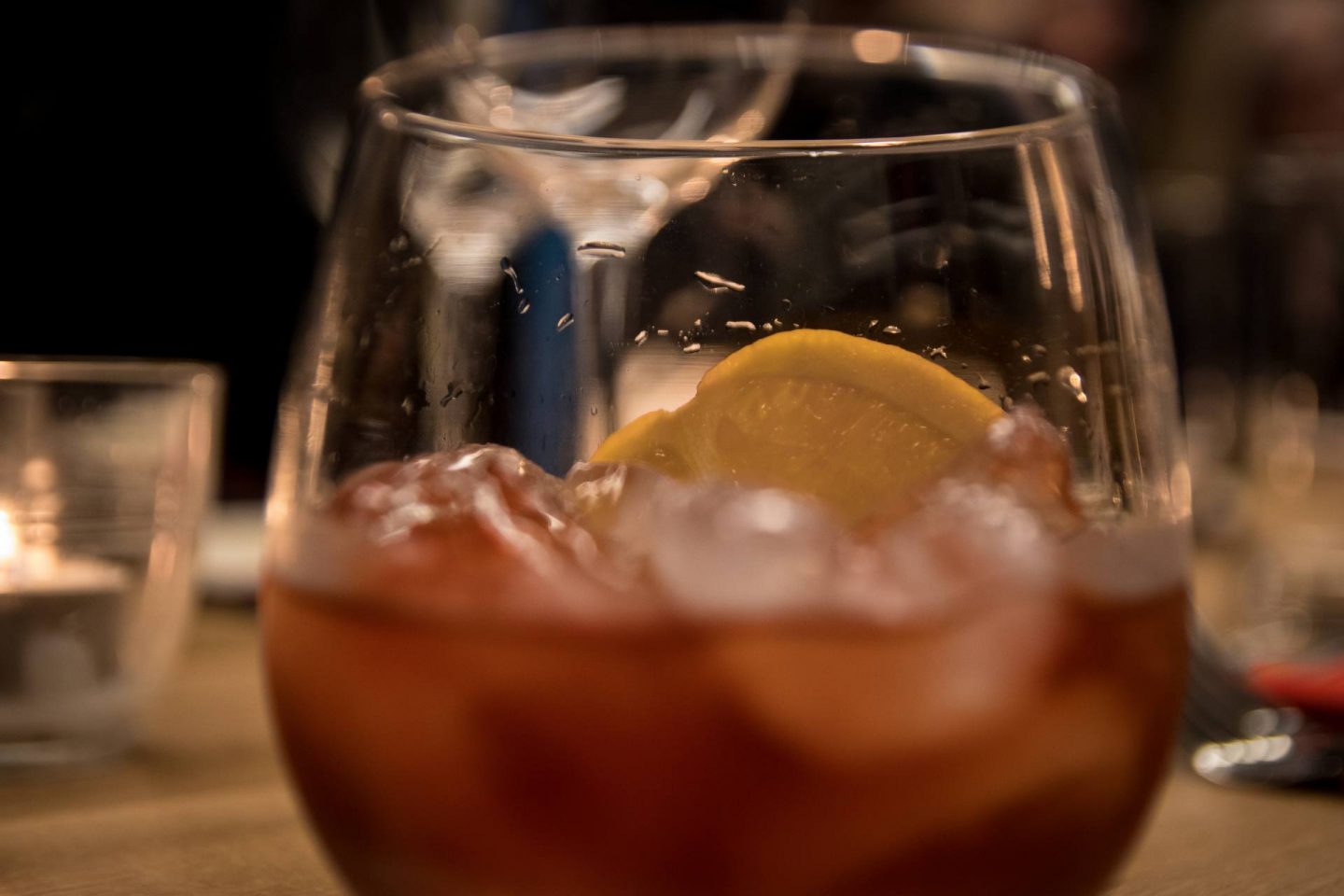 We began the night, once seated with a classic welcome drink in the form of a well crafted Negroni. It was strong, it was bitter and it was darn tasty. If the one, that comes included with your ticket price, isn’t enough for you then you are able to ensure your glass stays topped up with the good stuff throughout by ordering the same off the drink menu. 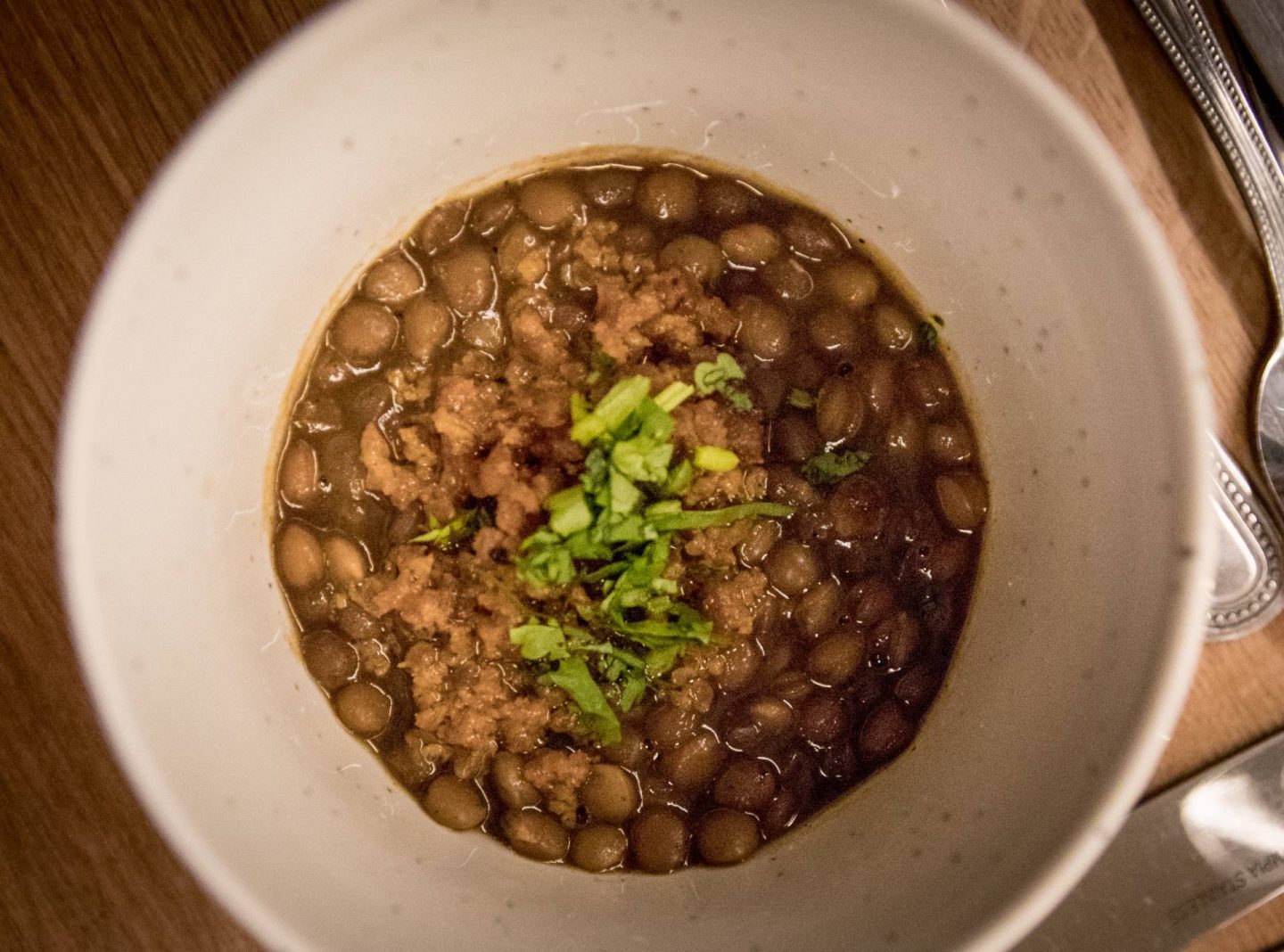 We kicked off the food with an Amuse Bouch that was crafted from Brown Lentils and Columbian Chorizo Crumbs. I’ve never really eaten lentils much but these made think about actually ordering them when I’m out and see them on the menu! They had so much more flavour than I expected! 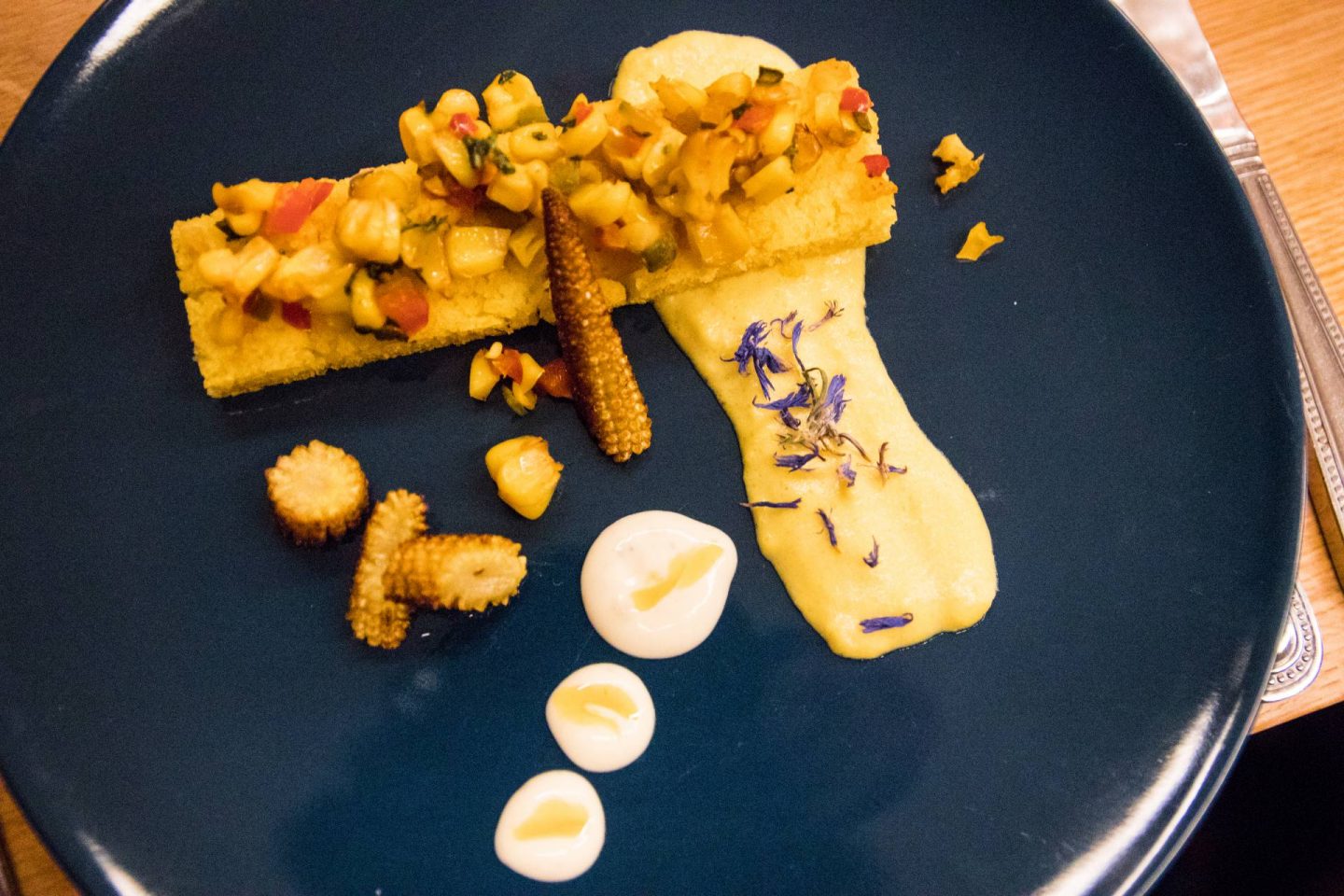 Again this would be something I maybe wouldn’t order when out and about as I tend to go for a meat or fish starter but this variation of corn, guasca crema, and corn flowers was bloody good! Again, making me think twice about always ordering similar starters each time I go out. Since having this, I’ve actually bought myself some sweetcorn to have at home! 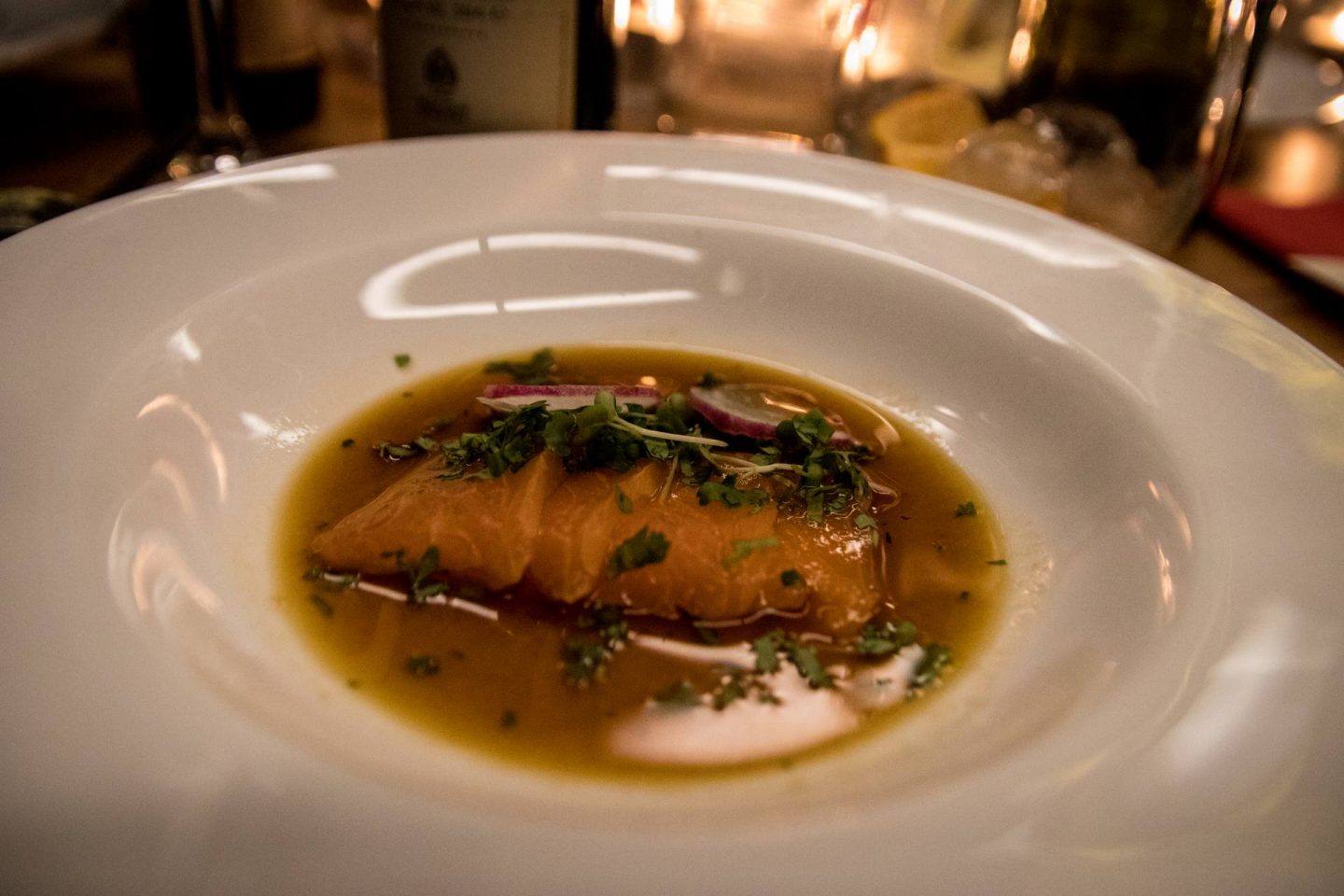 Our fish course was filled with so many flavours and I loved it! It’s called Tiradito de Salmon Nikkei which is actually Salmon, tamarind ponzu, with spring onion, radishes, and coriander. I would love to know how to cook sauce this yummy as it really surprised me that it didn’t taste like anything I’ve had before and complimented the salmon. 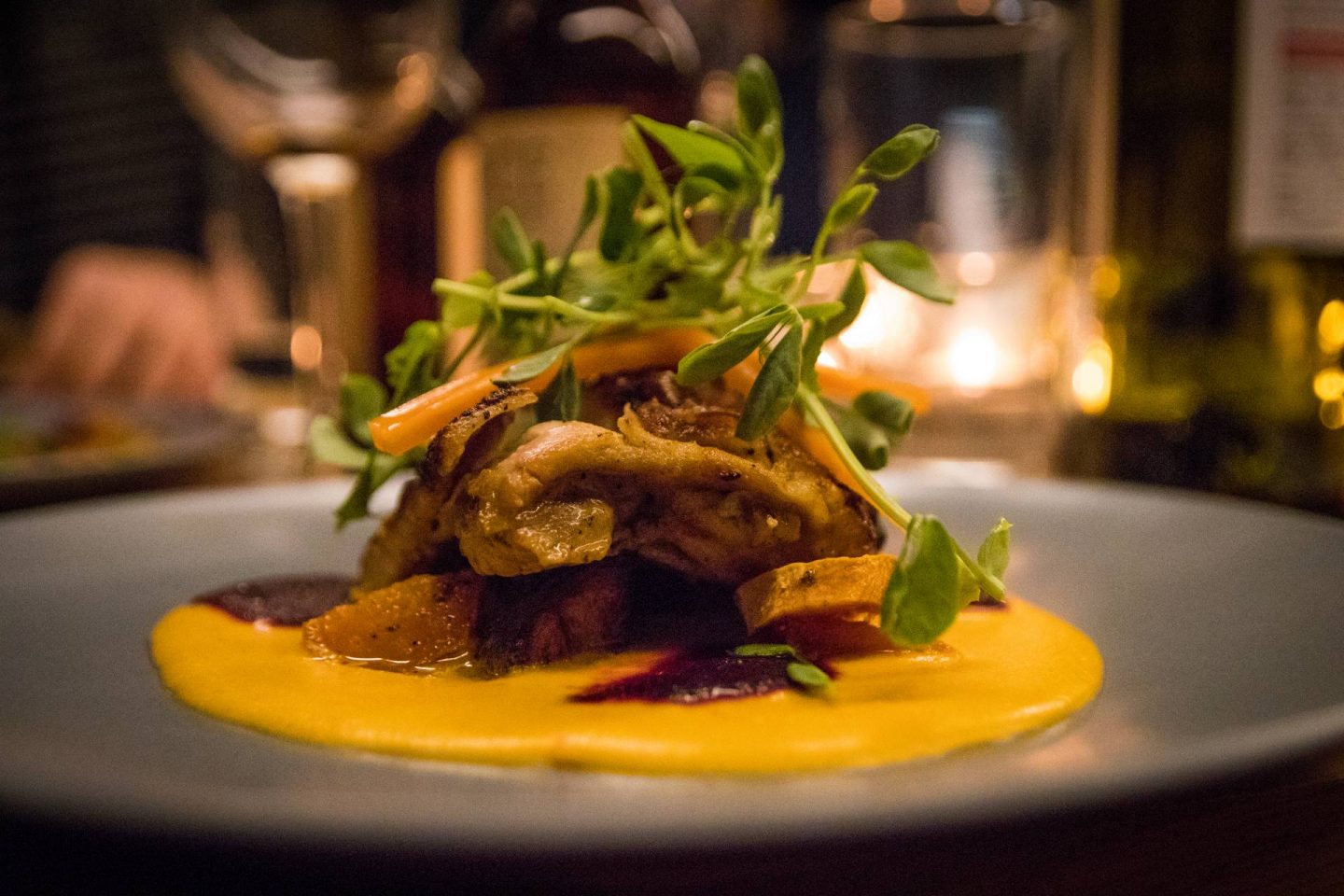 The Ají de Gallina main course was made up of roasted chicken, yellow chilli, beetroot, sweet potato, and topped with pickled carrots. This was my favourite of all the course, by just a smidge as it was all so good! As with the fish course, the sauce was divide and I would have licked my plate clean had I not been in company. The chicken was cooked so well too; it was juicy and melted in my mouth. 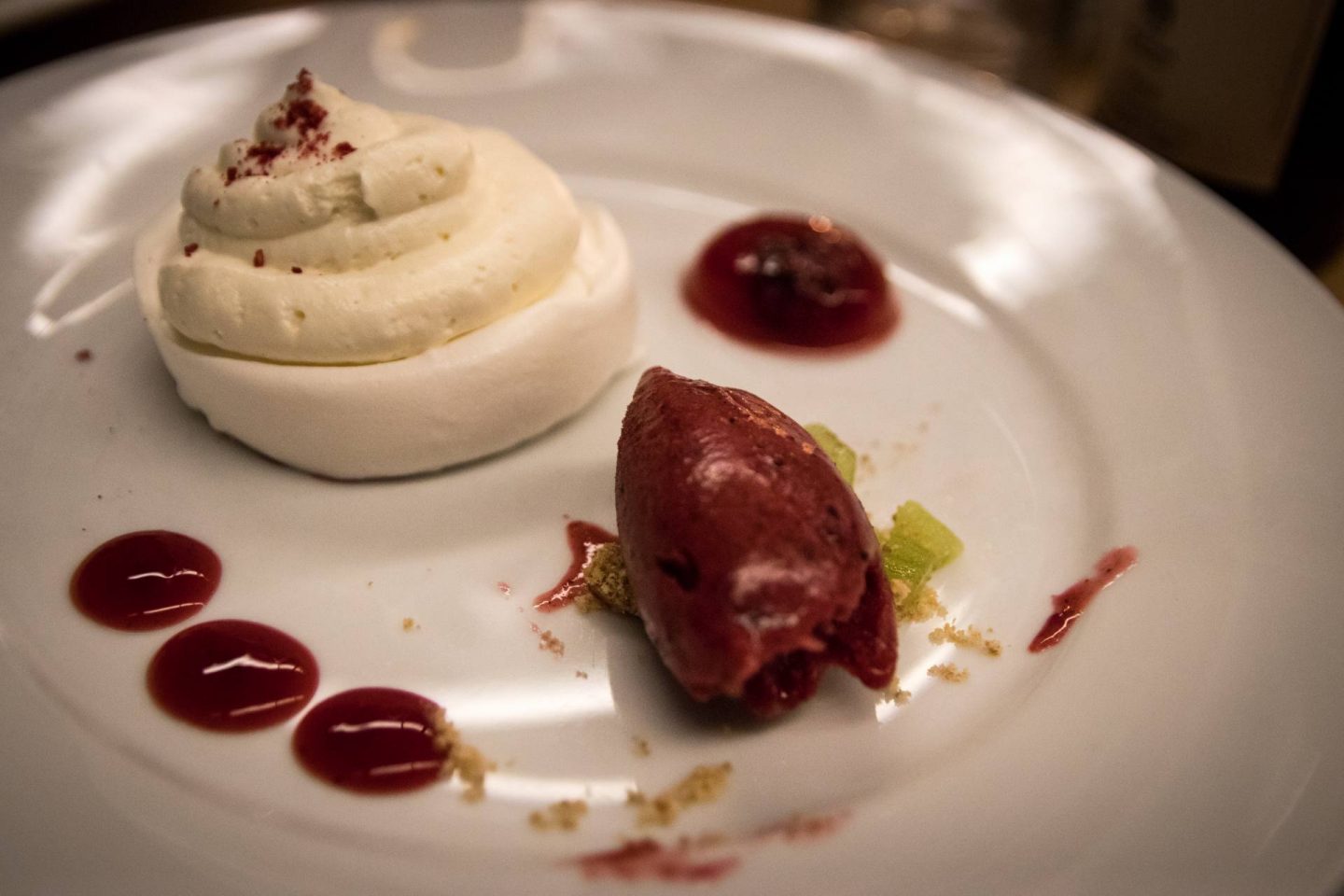 Dessert was a Merengón de guanabana which is made up of Guanabana cream, meringue, Andeanberry sorbet and coulis. Again, with the flavours I’ve never had before! This was a really nice way to end the meal as it was really light and didn’t make me feel overstuffed after all of the other courses. 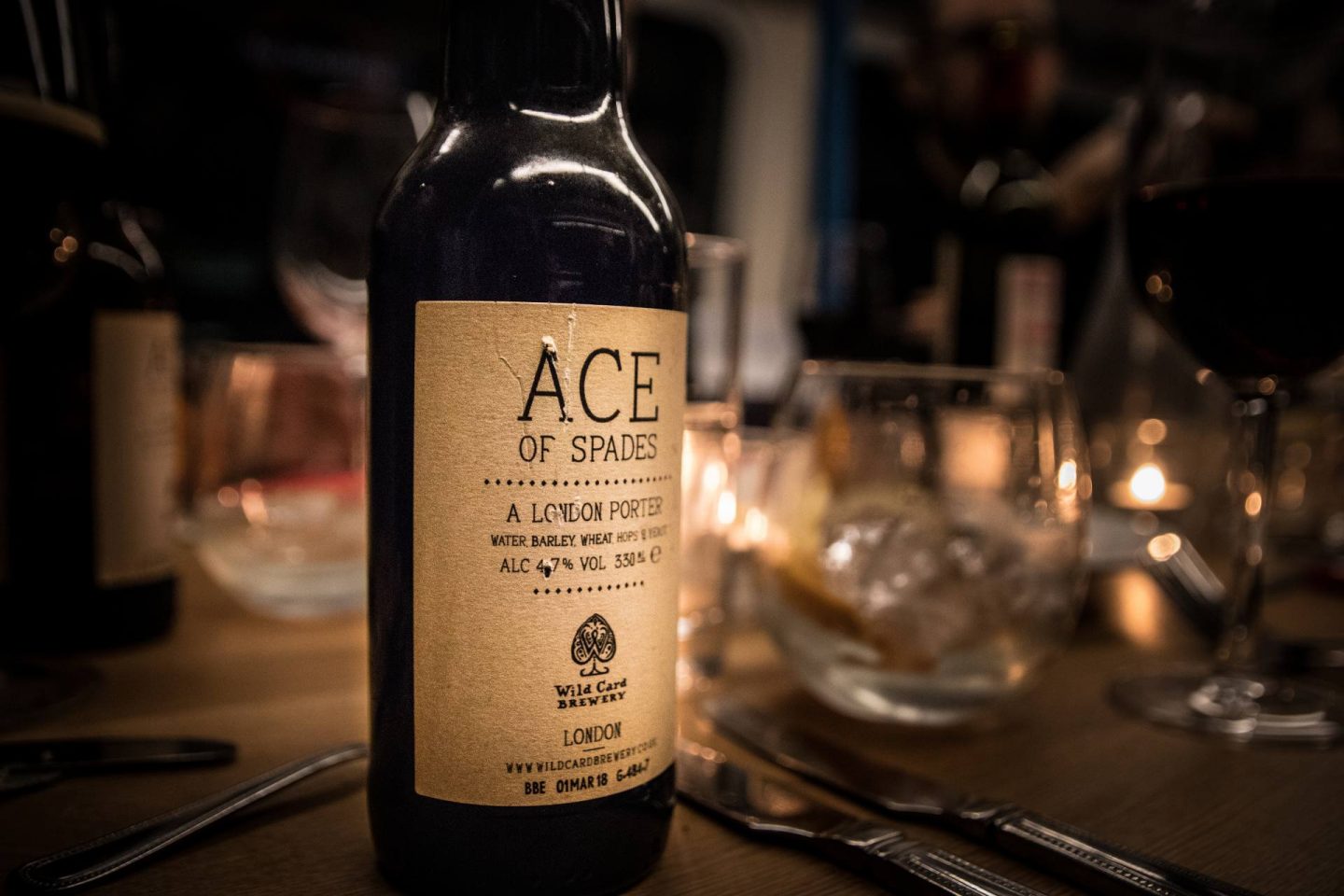 I washed all of this incredible food down with a Wild Card Brewery’s ‘Ace of Spades’ London Porter which I loved as it’s a local Walthamstow Brewery. It was rich but didn’t overpower the food which helps when you’re trying lots of new flavours.

I had such an awesome evening making new friends, trying so many new foods which I love and adding another mega quirky place to my London list!

I was invited to try out this supper club by Love Pop Ups London, all words and opinions are my own.

Ladies who Lunch at the Newly Refurbished…

Living Below The Line.

Dining at The Olive Tree at the…